This is maybe one of the most classic routes in the massif des Ecrins, le Grand Traversée de la Meije - via arête du Promontoire.

Opened already in 1877 the Arete is an enjoying ”ballade” never difficult in grade but quite hard to find the right way up. The general problem is that it winds it ways up those big formations sometimes leftwards and sometimes rightwards…its just to find the easiest possible way. Ones lost, it will take time and suddenly very hard.
But as always, thats the joy in climbing this kinds of routes, using the navigation skills.

We arrive in a most sunny la Grave after a surprisingly good coffee noisette at la ferme, col du Lautaret.
After some repacking we head for the lift and in a efficient mode I finally decide to take the route description out and start reading about how to get to the Refuge de Promontoire. Which is said to be an alpine climb just by its own.
Safe and happy at the upper lift I realize that the words and places doesn’t fit in on my map…so ok we or I have been a bit to optimistic in my mind to always go for the top.
We had just been talking about that the lower sections was more than nice to avoid walking up, over the messy huge moraines. Well, I just have to admit that that is what we just have to do. So, take the lift back to the middle station. And walk from there…up the just mentioned moraine… 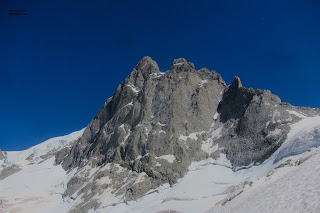 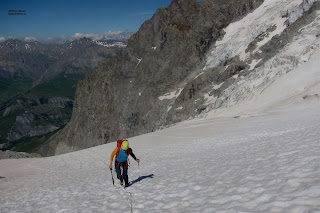 Once en route it is most obvious with a good track up solid rock with some interesting scrambling up les Enfetchores (PD/ll).
And its just to keep on going which isn’t to easy in the warm sunny weather…
After a couple of hours, like 2 hours, we are up at the col vers la Brèche de la Meije. And from here its, according to the huge amount of snow, only an other 30min down to the refuge. Where we are served one of their most famous and tasty dinners…and the bellevue! 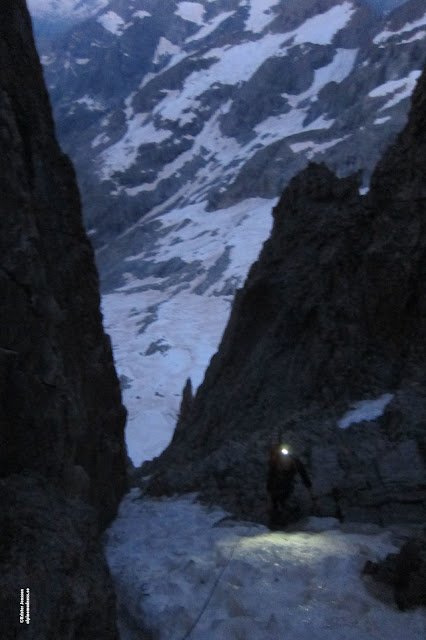 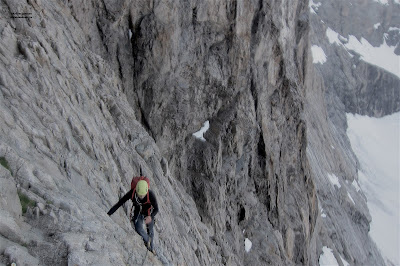 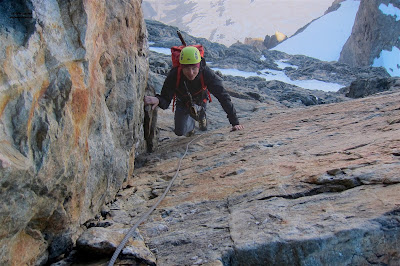 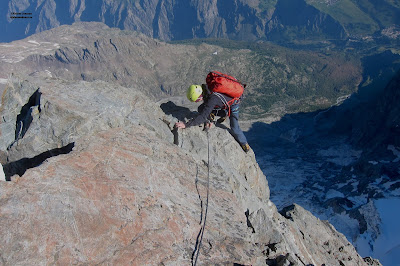 After a good portion of information about the route from the gardien we are ready for a big day out, setting the alarm at 03.00.
Realizing that we are the only team going for the travers we decide that we can take it a little easy and enjoy a long breakfast aiming to leave at 04:30. With only a little time before sunrise and minimizing the use of head torch.
Slowly learning I had been reading the route description quite well, finding out that it was a little ”climb left, go around and up…and then there is a fixed friend” After some 5 minutes I find the fixed friend and realize:


-we are en route and this will be a briljant climb…! 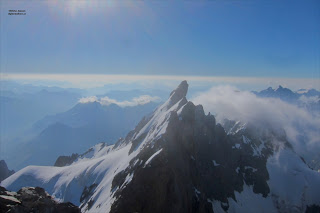 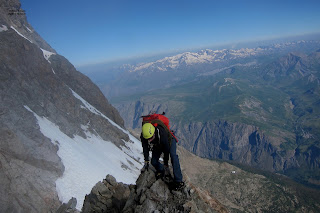 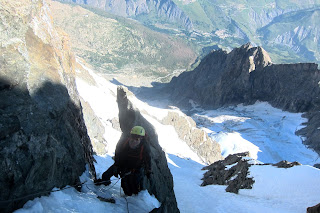 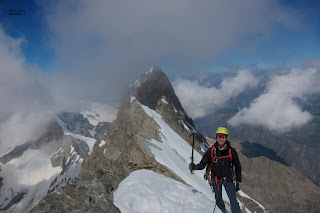 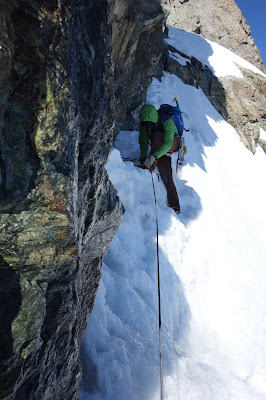 After 3hours of climbing we reach the summit of la Meije. Super lucky with the weather and the conditions on the mountain. And the only team starting from Promontoire, so we had the ridges for our selfs just until the upper last pitches where we catch up with 2 French teams which had used a divvy on the route. Great place for a bivvy!

With a short obligatory stop on the summit we continue the traverse and with the smell of coffee we are rolling in at the       l´Aigle refuge at 12:30.

This year has turned a lot of things around.

Weather wise it has been everything than normal. With a late arrival of the winter which was accompanied with a late departure of the same.
Which of course then made everything move forward, as le printemps and summer.
And to make things even more unstable my Ford decided to break down totally. And that was after I had it funky served with new breaks, kit du distrubition and clutch. Then the whole gear box breaks down, tres merde bordel!
And then the whole plan and its ideas goes into nothing and its only to focus ob getting new parts and someplace to repair the yankee.


But everything bad has some positive vibes. The Houte Savoie area is fairly easy to hitch hike, not on sundays though! And it has turned out to a most perfect école de langue.
And the train service is, I must say, very good. I only wish that the Saint Gervais Maire, Monsieur Jean-Marc Peillex, finally some day could step out and realize that there is an ongoing climate change. And maybe listen to the idea of having a couple of more frequent trains scheduled between Saint Gervais les Bains - Chamonix - Vallorcine.
If someone just could convince him that;
-No, people will not leave the l´Arve valley in huge masses for Chamonix if they can escape with the train. Which in fact!!! is one of his reasons not to try to get more trains running that section... oh la la.

A couple of sunny days, after numerous days with a whole bunch of unstable weather including heavy snow falls.
The metro shows sun and it means jam gloves on.
We pack the gear heading for Grands Montes  and refuge d´Argentière. Convinced by the last days snowing and the late spring, we decide to take skis for the approach, turns out to be a hit in the bulls eye. A great spring snow skin from the very top of Montets, all by our self in the whole cabin,, having the whole mountain for our selfs with only a few old ski tracks. We are at the base of day 1st goal after a little more then 1 hour. Cool!

We have our plans set for Aiguille du Jardin and "Voie des Toits". A six pitch route mac 6c, first put up by G Bettembourg in 1979.
A 250m climb mostly on good granit, following cracks over a couple of ...interesting roofs sections.
Good belays all the way and easy to rappel off.

After a day of good climbing we still have a couple of nice turns to look forward to down to the refuge and a good espresso overlooking the surrounding mountains, Verte, Droites, les Courtes....
Finishing the day with a carafe of wine accompanied by a good meal served by Fred and Bea, at Refuge d´Argentiere. 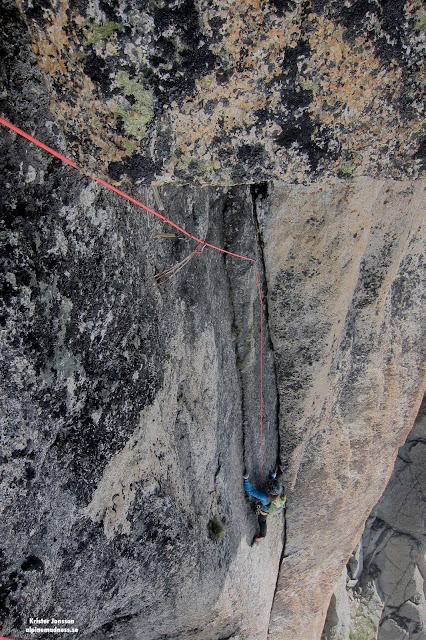 It is hard to choose between all the good routes in this bassin, but if you haven climbed "Versant Satanique" the choice is easy still. It is a must do.
After letting the other teams move out at 03.00 we have a late breakfast and leave after 08, with a belly full of very petit déjeuner.

The 1h approach
is done on perfect hard snow direct from the hut.
Once again it turns out to be a perfect time of, maybe not year but section of time, in mountaineering timing is A & O as well as a heavy back pack is full of agony.
The start of the climb is super easy to find. Because you can start everywhere!
And of course I start, in good maner, a the wrong place. Ending up below a most tuff looking hard to protect arête. 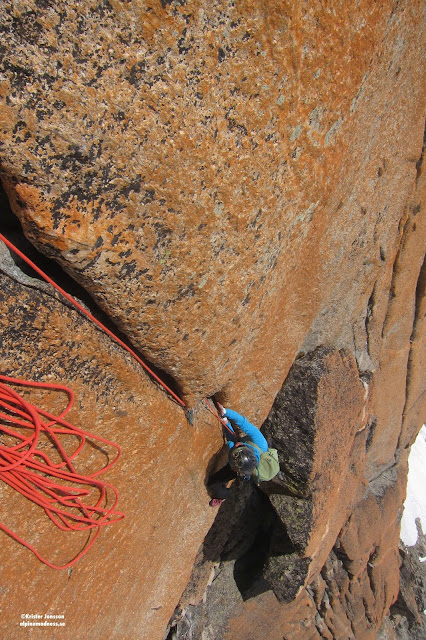 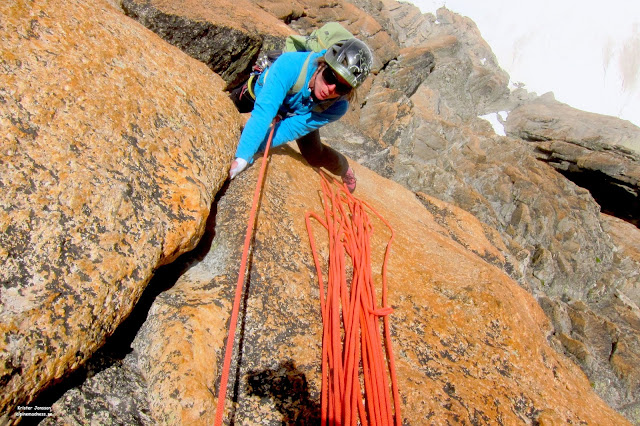 Well, shame on the one who gives up, on y va!

A big fight and I reach the belay and some more cussin brings me to the next one...easy as that.
And finally we are at the Satanique original. Which doesn´t bring any shame on us.
Brilliant climbing on brilliant granit with brilliant cracks, BRILLIANT!

The crux 6c pitch has some unforgettable jamming, steep hand and fist cracks. And the last pitch don't pass me untouched.

Obs, its a new top out : Mont-Blanc GRANITE, Damilano, Désécures, Laurent
Can be bought at the refuge, same price as in any shop in Chamonix. 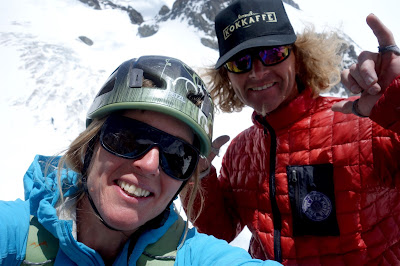