Tech tips from the Van 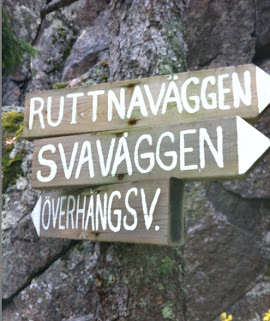 Today I had a really nice experience and then not just from climbing some fine cracks above the sea at Ringkallen
I made a controlled rappel of the rope, using an other rope as a backup.
Why? Just to get a feeling of how it would be. And believe me, it didn't feel to nice. Even though I had an other rope to break the airtrip after just a short distance.
But, now I know the feeling! 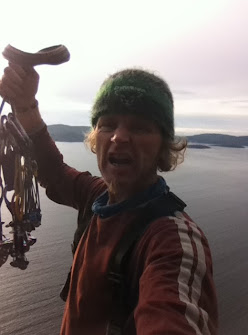 Knots
There is always some discussions and ideas of how and wich knots for tying ropes together for rappels
While for that purpose few, fewer?, people are still using the double fishermans (I must say I am a fan of the ordinary overhand knot, EDK?. It seems to be the knot of choice for most people since it it easy and perform well when the rope is being pulled down. Also easy to make with gloves on.
And at least as long the ropes are same or similar diameter.
But somewhere there is a "border" when I abandon the overhand and tie an thread figure of eight instead.
A fisherman's in contrast, is hard to untie and takes relatively little additional cord for long tails. That sounds like a pretty good knot for a v-thread/Abalakov? I prefer this before the water knot. Its easy to tie, don't take a lot of spare rope/webb and is rock safe.

Not a good option, direct fall in a horizontal Abalakov, please notice the T-shirt :-)

Now this take me to the, for many upsetting and mythic; Abalakov
Named after a famous Russian alpinist, who I think is still alive!?
I just read a story, hope it was, where the climbers rapped down, clipped into the anchor, pulled their rope, and the thread "broke." What actually happened was that they had clipped into the tails on the thread, which had re-frozen into the ice! Always make sure you're clipped into the true thread and not the tails.
Which knot when tying abalakow slings? Couldn’t I use a overhand here as well? That would seem much easier to tie with gloves on! My experience when putting force on the knot is that an overhand could untie, a thing that won't happen to a correct made fisherman.
And now we are out on slippery ice, because what I use even more often is just the rope direct trough the thread, saves a lot of cord and keeps the planet a bit cleaner.
The only thing to be observant to is if the ice is dry or wet. When wet and cold the rope will freeze and then you will have a fix rope:-) But with dry ice, as it is quite often on alpine ice this is a safe metod. Just, as always should, back the anchor up for the first person going down and then pull on the rope before the last, and lightest, one goes. This to be sure that the rope doesn't freeze.

How to do the abalakov.
well, I suggest to use the longest ice scruw you got, at least a 190mm, and try to do a trippel 60 V-thread.
Horizontal or vertical?
Studies on this has shown that, believe it or not, the vertical one is stronger. Even though both are strong enough when made right.
I always try to clean of the ice on top and also use the area where the ice is concave. Also the colour of the ice says a lot, the whither it is the less it will hold. Better with yellow ice, for rappelling not drinking:-) 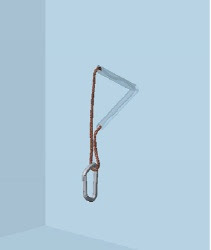 Ice bollards
I don't see any purpose why to use it!
On snow, yes. Because there might not be any other option. But on ice, it dosnt only take longer time to make, it's a bit more unsafe.

If you still use cord, it should be at least 7mm for threads, the thicker the better.