Kaisepakte "Arête la Niehku" ( the dream arête ) - a loong wanted route !
Some 10 years ago! I was driving up towards Norway and Spansdalen, passing Riksgränsen / Abisko on the way for some regular ice climbing. Something that payed my attention on the road was some thin icicles formed on the most eastern part of Kaisepakte, about 11km before Abisko. 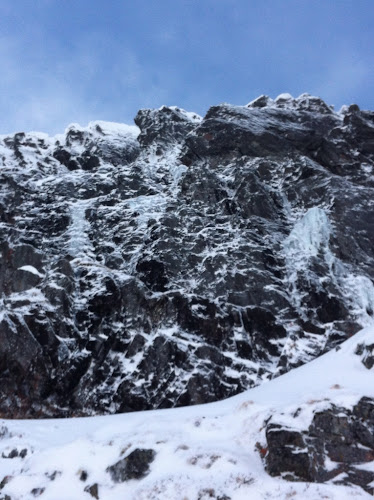 A long approach, reasons due to lack of time and no one else interested to walk up at try it, and that it looked pretty hard, reasons that the time passed and years went. I always had a look on this pillar/arête every time I passed it, sometimes it was formed, sometimes not.... The only thing that stayed in form was me, more and more keen to give it a try
Finally
With a trip booked up to Senja, Norway, visiting Bent Eilertsen at Senja mountain lodge, I had a full week of climbing and skiing ahead. The way up we flew via Kiruna and made the long drive up to Senja, a 4h Plus drive on typical Norwegian roads. The route came up to my mind direct as a backup just in case, but the lack of light made it impossible to see if there was one of these years that it had formed...
Arriving at Senja the weather gave us a most wet stay, but a good chance to test our gear, clothes and ropes! Double gore tex time indeed!!
But, everything has an end and after four days with constant rainy buisness we throw the towel in and headed back east. A steep closer to my line...
A 40min drive took us to the closest distans from the mountain and we could still see nothing. The clouds made its best to cover it. But, we quickly, or if it was just me, made a backup plan if the lack of ice was total. The main icefall had a lot of ice on it so we could always escape to that one, let's get going. 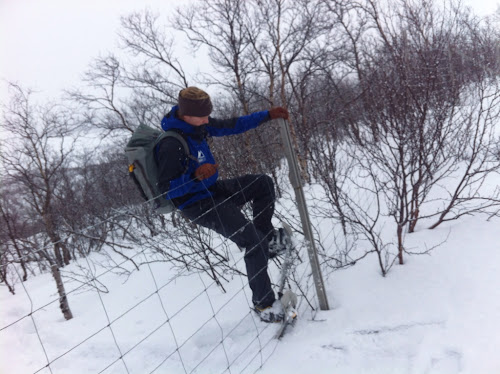 Frist CRUX On the route, passing the train fence


My earlier reconnaissance was right so far that the approach was long and the terrain a bit salissant, and a 50cm soft snow under a 5mm crust didn't help much in any other positiv matter then giving more of a workout. Even though the snowshoes made the "stroll" a little better going
As positiv as possible I scanned the mountain side with an other couple of interesting lines, but the one in mind was definitely the best. And soon we should find out 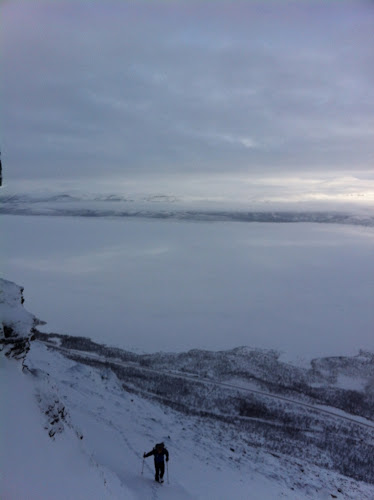 
Placed on the very end and east facing corner we had to walk the whole side before getting to the truth. I had an idea that the route it self should be about 4-5 pitches with ice at the base and mixed at the top.
And yes, a thin strike of ice was glancing over me. But a bit closer it was only to find out that it started about 5-6 meter up, above a compact wall. But an other option soon turned out, a thin ramp a bit lower down should be useful to connect with the higher ice passages. And after that...in shalla! 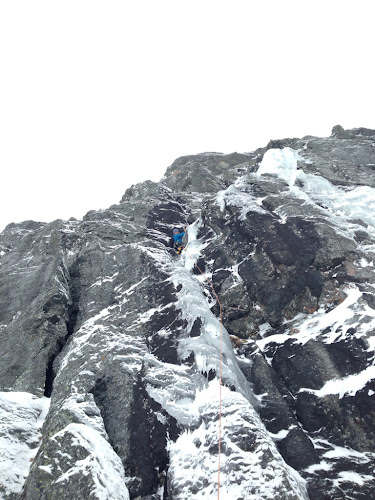 First pitch of "Arête la Niehku"
With new blades on my tools I started picking my way up, slow and gentle with the brittle ice formations. After 10m I found a crack to put a no.2 stopper, stepped up high, placed the axe and everything cracked. Stepping up a bit higher I tried again, same result. A brisk hollow sound sent the message that this was fragile ground. A little bit desperate I focused on a third effort, after Ola made the announcement that "maybe just come back down, let's try something else" 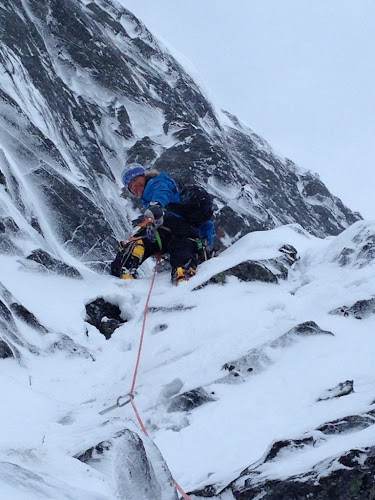 
People that know me know it's a good way of forcing me a little bit more. After checking the stopper a couple of times extra, giving it a bit of a punch to stay in place I found a higher list to place the front point on and stretched as high as 173cm can be. Swinging the blade as gentle as possible and two soft strikes it felt ok, then one more high reach and same result, ice cracking but not so much. This could work actually! An other six seven meters and I found a most perfect placement for a no.6 stopper, this will work actually!!
Climbing up an other 20m and I happily arrange a good belay on perfect ice. And a commenting Ola is soon following up the mixed terrain to join me. Having a look on the next pitch that had much more of a relaxing caracter I'm eager to get going 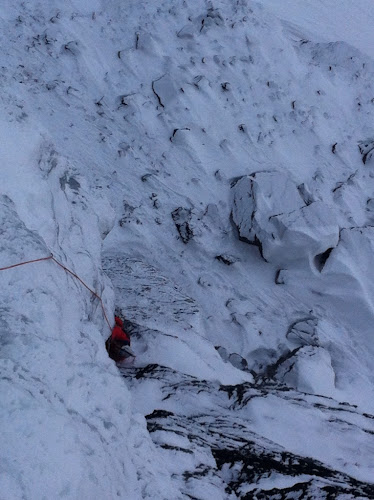 A vertical ice section ended at a suspisios small snow field, with nothing else then soft snow to place the tools in. A delicate steep and I could arrange my self on the snow, climbing up and traversing over a longer bit of mixed stuff. A 40m pitch took me under some nasty looking cornice, but nothing else to do then to adapt to the route finding devoirs 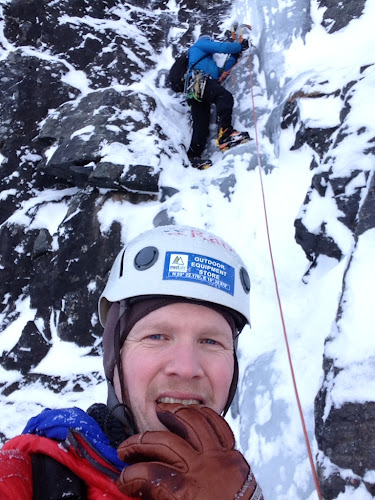 
An exposed traverse over some snow covered ledges and a 10 m later I find a most perfect crack to bang in a mid size stopper before a vertical mossy section which sends me to a lower angel corner system. What I will find around the corner stays a secret, only one way to find out.
Again there is a crack this time horizontal, to place a piton in deep enough to make the next vertical steep feel safe, anyhow the last bit won't stop me now! An acrobatic split/roll swings me over the edge up to a bigger ledge system and a final step wall up over the top, not even a cornice to fight, thanks! 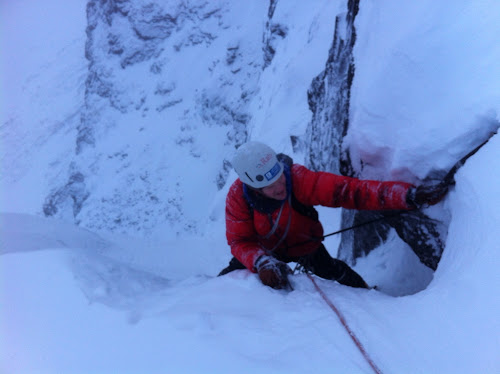 
At top, after 2 1/2h focused climbing. Still enough daylight to find a secure way down, only forced to rappel once, because of some mean looking snowfields. Feels better to be in a rope at touch down.
Then it's only a good hours walk back down to the road/car, just hoping to find the snowshoes. Turns out to just as tricky. And a well deserved Coffey at the STF station after a full day out and a long wanted climb in the bag! 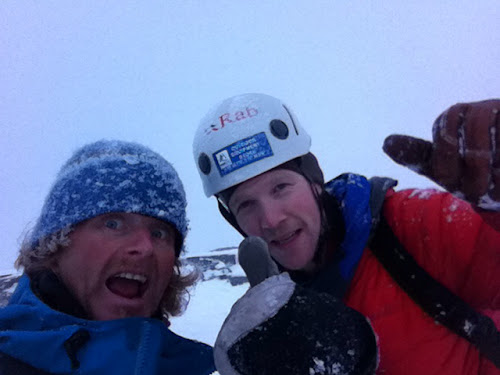 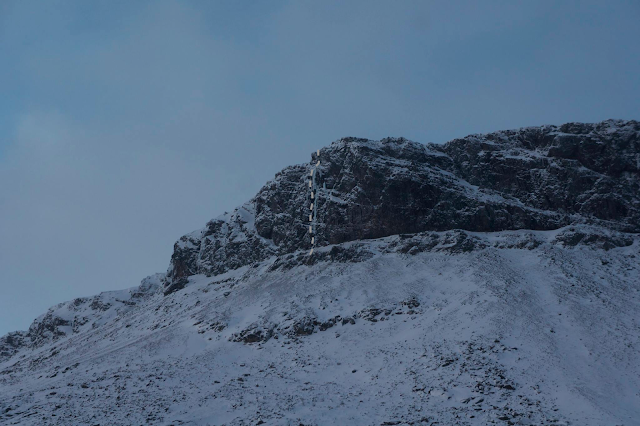 Working is good as long as you don't forget to live