During a week in the area of Stora sjöfallet we, Johan Lindfors and myself, had the opportunity, with great ice conditions for the year as it looks, to climb a bunch of lines during our stay.

With the great help from the hosts at Stora sjöfallets Mountain Lodge we could get access to a beautiful area of the North side of Nieras and its East- and Norths faces. Which turned out to hold a good amount of potential new routes and lines.

We stayed for one week, with 5 days of climbing, and put up 5 new routes...

The first day, upon arrival, we was meet with a beautiful sky and high clouds and with a night that provided a great Aurora show on the sky high above. With a coffee in hand I spent 2 hours outside just amazed of the spectacular fenomen. But during the night we had a shift in the weather front, giving us a full on storm during the next 4 days. Which made us just stay down in the tree line the first day, enjoying the open tree skiing areas above the Mountain Lodge.

But, since our main misson was to climb we made a recon tour in the late afternoon up to the barrage of Sitas. From which we could see a huge number of interesting waterfalls and mixed lines on its East and North sides. We had a plan indeed!!

Next morning, still super strong winds, but we had found a line on the east face of Nieras which should be protected from the wind, a bit of lee side maybe. Which it turned out to be, if you don't mind the spinn drifts! We took a full day out climbing a quite interesting line over 3 pitches with ice up to WI5+. And totally blasted by the snow drift.

Nice to be well protected with clothes designed in Britain and tested in the Scottish Alps! 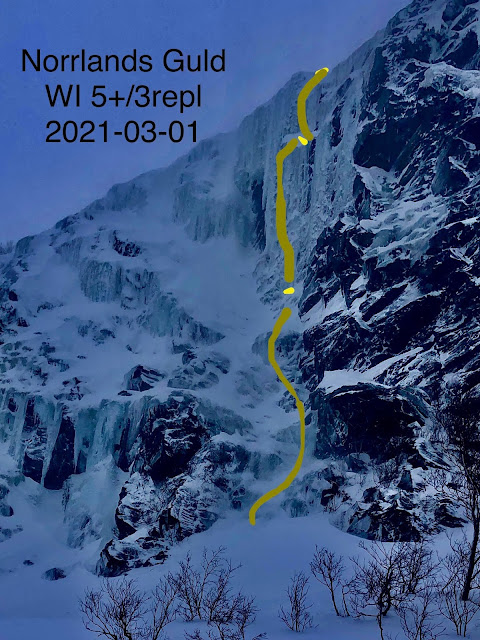 The following days we climbed more on the North facing walls of Nieras, putting up 3 routes up to WI6. But we had one more deal with the East face, a thin steep line of ice that looked just amazingly good. The type of climbing that I enjoy the most, technical ice formations over steep, overhanging rock. And it turned out to follow up all my expectations. Starting in nice beautiful blue sky weather we finished in beautiful spinndrift and full on storm, again!! 😎💪👊 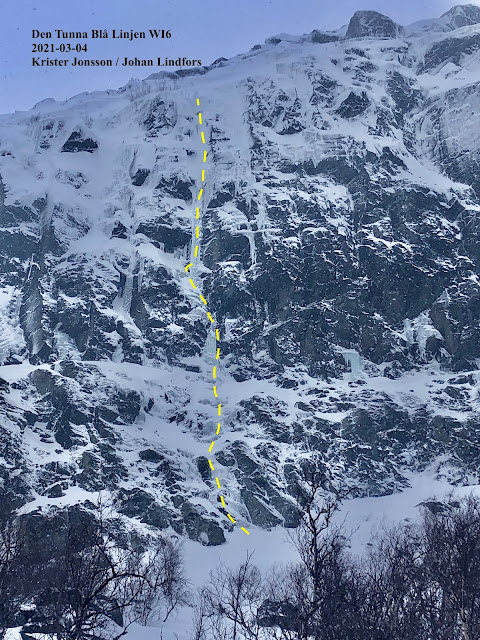 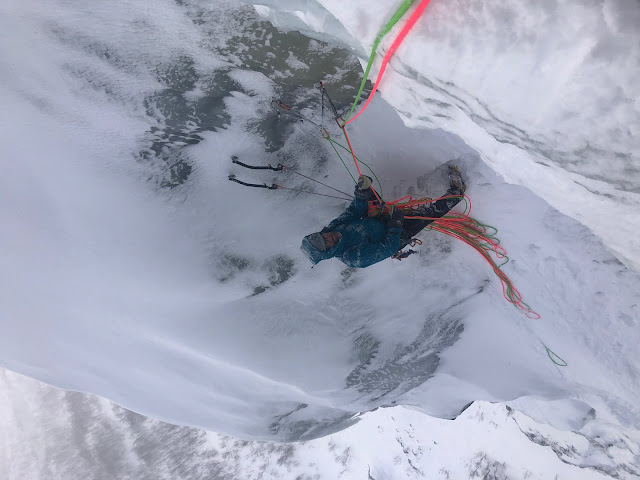 Stora Sjöfallet is on the entrance to Sarek and Ritsem, on the way between Gällivare in the north and Jokkmokk in the south. There is a good bus connection when arriving with the train to Gällivare. The history about the place is caused of the huge water barrage, which provides Sweden with a great amount of electricity. Which has put a huge environmental effect over the area. Drowning and destroying many of the traditional Lappish villages and their traditional areas´´, many of which they were forced to leave the these constructions started to take place. Convenient enough the Swedish government at that time, changed the laws and restrictions to be able to construct these hydroelectricity power stations.

All this has of course changed the area in many ways, but it has also provided a good road up to this part of the massif of Sarek, Ahkka and Ritsem. By which we can access the ice climbing. 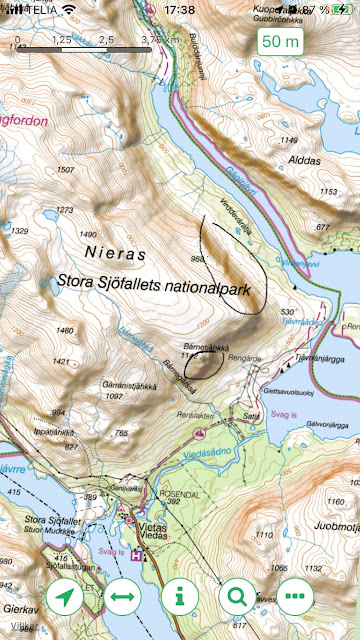 You can ice climb in this area during a long period of the winter, normally already from October/November until May.

There is a few places to stay. Free camping is an option for the hard cores!

My best experience is at the Stora Sjofallets Mountain Lodge, with the option to rent a room, single double, or a cabin. With access to a great restaurant after a good day out!