This south side of Mont Blanc holds a big number of good high quality rock climbs. Much less famous then its northern neighbor of Chamonix.
One reason could probably be that the info of this routes and the whole area is much less described...so why I am writing this? Should just keep it quiet!
Well, the other reason would be that the access to the rifugios and the climbs is much longer by foot, no lifts to make it quicker/easier, its pure walk by foot. And many times quite demanding by it self.
As one friend of mine once told me,
-the hike up is just by it self an adventure!
But the payment is superb and the views are stunning, as well as the exposure.

We decided to go for a long classic route via rifugio Monzino - "via Ottoz" on Aiguille Croux.
A 350 meter climb over 13 pitches with maximum 6a and 5c as obligatoire. Easy accessed from Monzino, as far as you just up there!, and straightforward climbing, mostly on good rock as you find it in the mountains.
And just as important, the descent is mostly done by foot! A couple of short rappels from the summit part. But still, a long day out if the plan is to descent all the way back to the valley and Courmayeur afterwards. A plan that we for sure had made up already, this was the type of ballade that was to be enjoyed with some good italian cousine afterwards, together with the rest of the ingredients.
After a slow but interesting morning with some warm up climbs in Servoz at le Diosaz. And some short impulse shopping at a local out-door supplier we headed off thought the tunnel to the "sunny side" and the land of great espresso!

Interesting still, but after have been living for such a long time in CHX I hadn't really been driving that high up in Val Veni before. Just skied it a number of times! And never been up to Manzino before. And as usual the parking it self was the hardest part to deal with, where to place the Ford...
But finally, a bunch of top packing the sac and we was "en route".
Once on the track it is easy.... 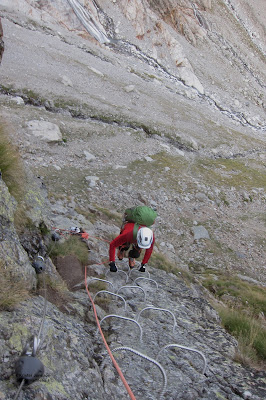 Heading up the valley we soon found the first part of the famous via ferrata, which actually make the whole thing possible to get up to the hut and the base of the mountain it self.
Quite funny to think of, a big great installation up a more or less impossible face so climbers can get to something even more impossible looking face...
A 2 hour walk and we arrive at a very quiet rifugio, well almost, a couple close to doing some activity  who for sure ain´t expecting any company at that time is just about to inside.
And our entre is a bit ... situation difficile ...for a moment but quite soon its lighten up and we are all well installed inside.
the only problem turns out to be the water issue. With two big glaciers, one on each side of the hut, it feel a bit strange that there is no fresh water available. The solution is a 15min hike up the path and the bigger ravin which still is flowing with some fresh stuff.
With all bottle swell filled I just recon the next days walk to the cliff and head back for a late dinner with a view. 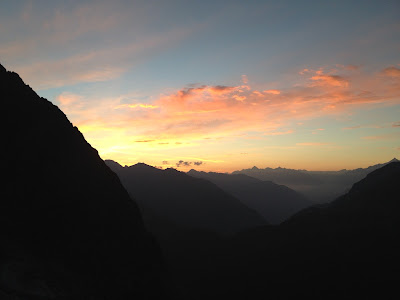 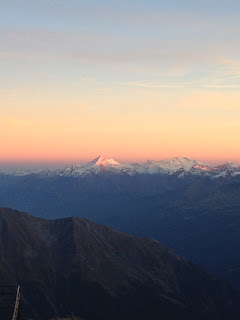 The 6 a clock alarm is as always most expected, waking up just the usual 30seconds before it fires of.
And my morning coffee feels better than usual with a sun rise that could melt anyone, a magic light over the massif slowly warming up the mountains and its habitants.

"Born by the Mountains - shaped by stones and hard rocks"

The regular light mountain breakfast is quickly played and we head of towards todays goal, Voi Ottos. Named after Arturo Ottoz, a well know Courmayeur guida, who together with Eugenio Hurzeler climbed this route back in 1935. The route is famous for being hard to place gear on, which has changed quite a bit these days since it has big number of bolts on it as well as belays.
Safer, sure! But has taken a big amount of adventure away!!
The only place that isn't really well protected is the 6a crux, quite hard 6a as well. A very airy step which shows sign of being protected with a fixed sling, long time ago. 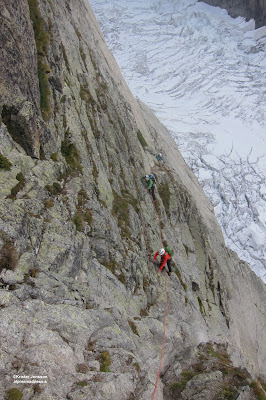 The climbing is very involving, most enjoyable and variated. The regular route finding is not challenging but since there is a number of bolts heading all ways of direction it would still be easy to head off somewhere else here and there.

The start of the route is mostly easy climbing/scrambling. And after the crux section it gets back to that again, it is just to keep focus for some loose holds and steps.
The feeling of climbing on this wall is most pleasant, with big mountains surrounding us with its famous big routes as Inominata and the impressive arete du Peuterey.
Pure alpine history area. 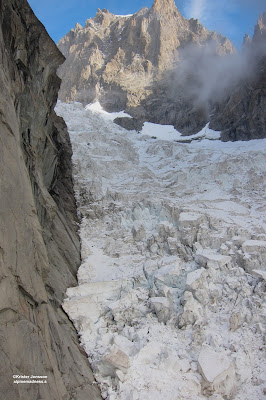 After the last pitches which takes us up to the col and join the norma route up Aig. Croux there is 2 short pitches of easy scrambling to the top.
And from there its a short airy walk over to the real summit, just some minutes away. A couple of snacks later, on which Jan descends an impressive sandwich down an apparently hungry trout we start the long descent back down, rappelling down the normal route.


Some short rappels is finally followed by a trail well marked by cairns, which at some places on the more exposed side. So its not a bad alternativ to keep the harnesses on.
Once back down at the rifugio Kari has suffered more than just bad from toe eating shoes...the non played pain is easy to espy. And still, we have some 1000 vertical meters to go....its gonna be a well deserved dinner for someone! 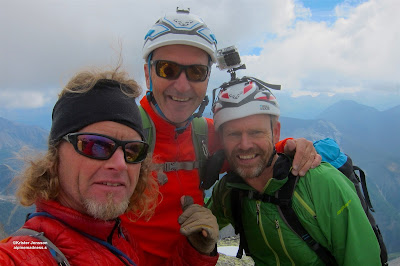 //Most people don’t even know enough to know how little they know.