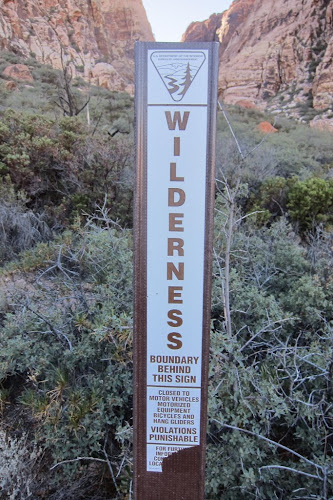 First of all, you will need a pair of comfy pair of shoes. Someone tell me just WHY, have Scarpa stopped making these great shoes? the Marathons role'ed the world, actually rocked it!

Even the color is there... 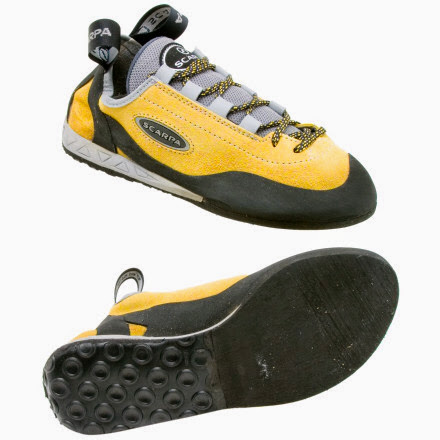 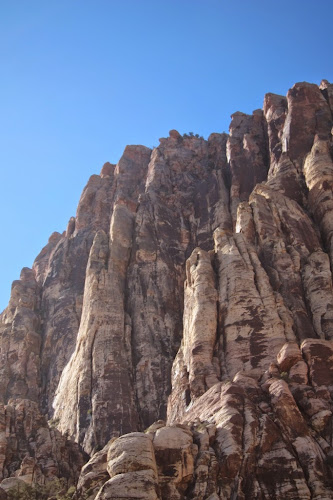 Didn't think it was possible to find. But an off route climb became a new line up the vertical slabs at Ginger buttress, Juniper canyon 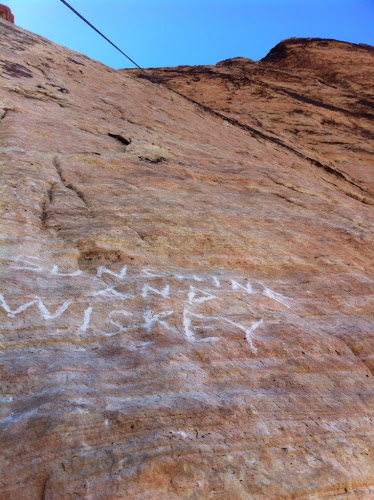 My plan was to climb the 2star rout of Power Failure. A plan that came to a fact since the original route planned was occupied by a traditional team of climbers...say no more...change of planes. And since I was the late one I made it to the base of P F and raced up with the pro I carried with just in case it showed out that I was just that...LATE! 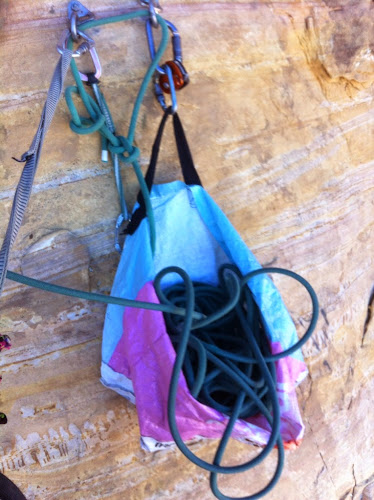 A quick look in the topo, 3 straight on pitches, up and a leftward move a bit higher, passing a couple of bolts on the way. Well, could it be more wrong?!

"As I found the told 5.8 pitch was unreasonable ruff and not even the anchors showed up. When finally the crack started to fade out it started to come serious! 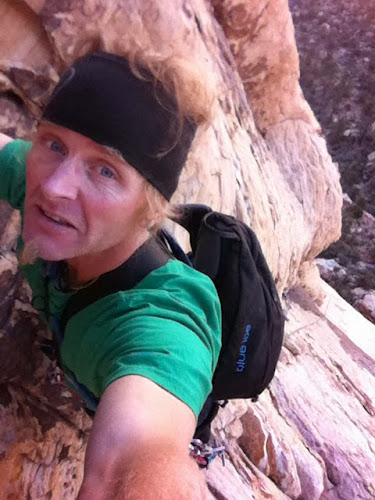 Top of pitch 3, moving in tithe anchor of Power Failure

A desperate traverse out left ended in a shallow corner. Dead end!

Back to the crack and nothing else to do then make a belay, rap down and clean. And, realizing that the original pitch went rightwards. Hoppla!!

A bunch of mind making the sharp end headed upwards from the belay, 50m up.

Two good pieces in the crack and then a full 20m run out over close to vertical slabs...to a fixed bolted belay on Power Failure"

1. 5.10b Same start as Power Failure but continue up the crack which fades out. Belay just at/below the top of the crack. One nut in place

2. 5.10cR Place a good pro high up in the crack and continue up the slab on small holds. Loong run out, expect injury if you fall, some 20m runout.

Belay at top of pitch 2 of Power Failure 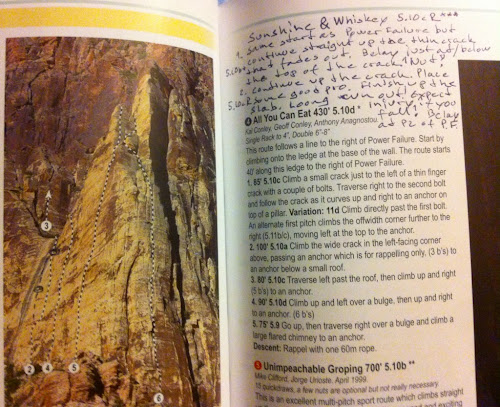 //Between long winters, there is short summers... 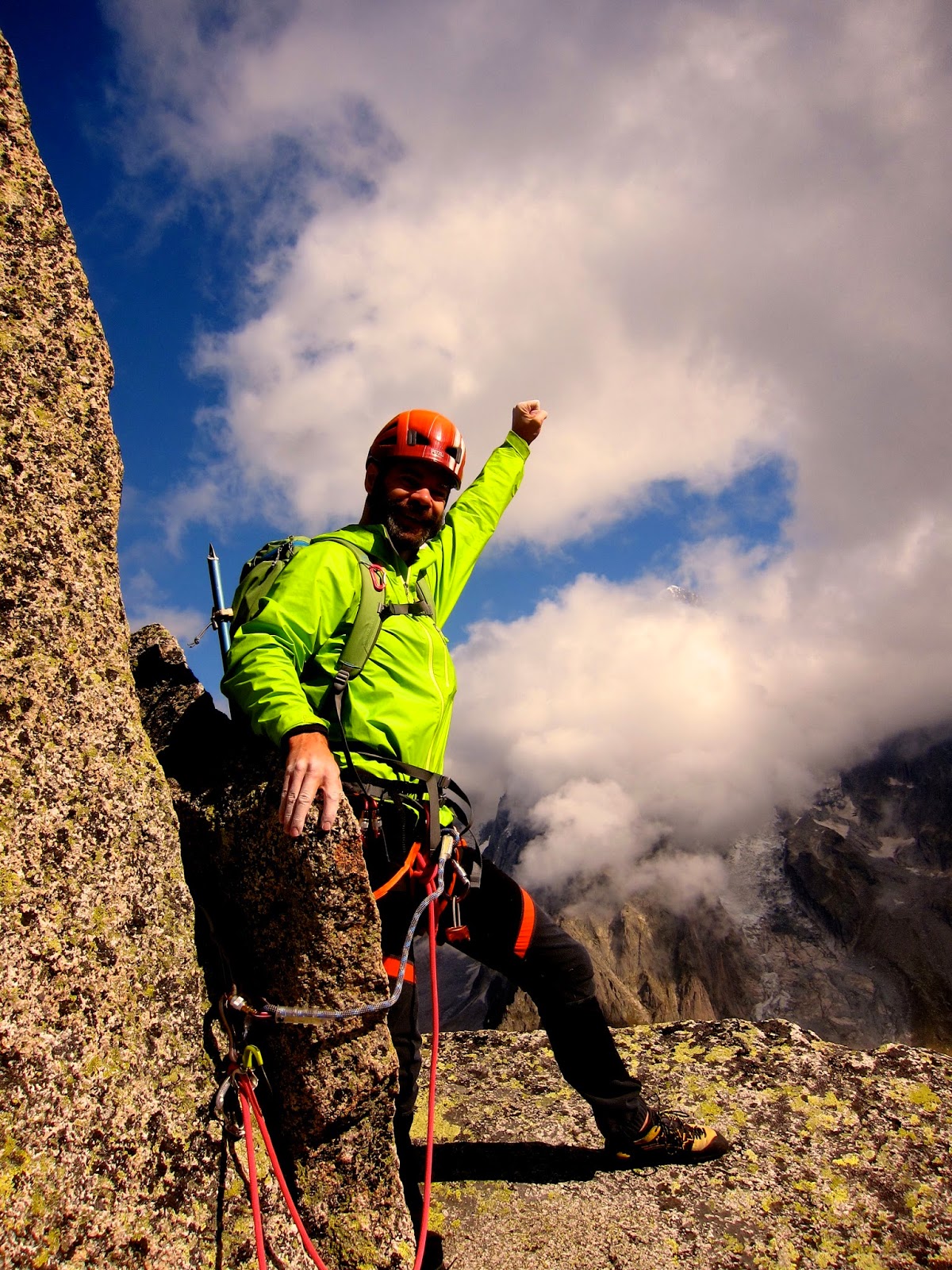 A great nice and straight forward climb that is possible to reach and climb even with the short opening hours of le CDMTB restricted "opening" at this time of the year
- Even though the great people that work there really tries to hold it for you, super big thanks for holding the door open!!! 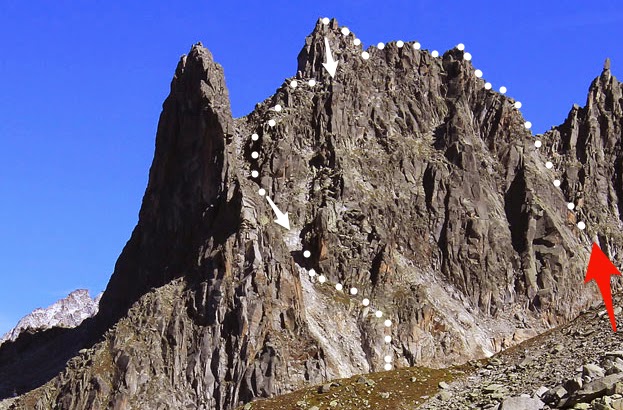 A very rainy evening and night meant that the Midi lift didn't open at regular 80:30 hours, so the 09 departure had to work, which we just didn't squeeze into either. Which meant an other 15 min waiting...well instead we got an extra morning espresso, so not to bad in the end 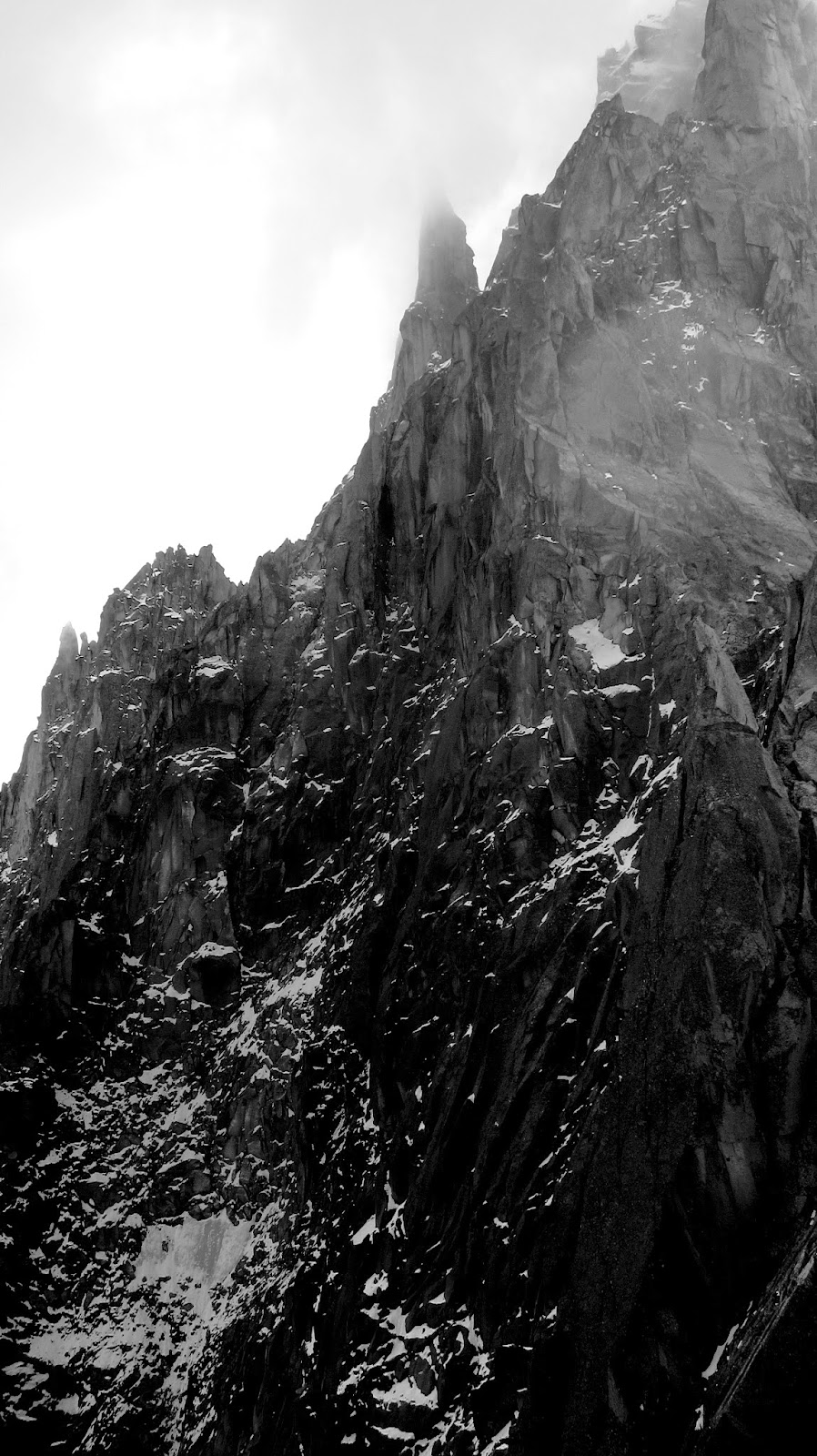 Finally arriving le Plan, we headed off towards the obvious trail to lac Bleu and onwards direction
glacier Nantillons.Which we decided didn't need neither crampons nor ice axe, a choice that wasn't ... the best maybe but on the other hand the running shoes got to a good use on the return... 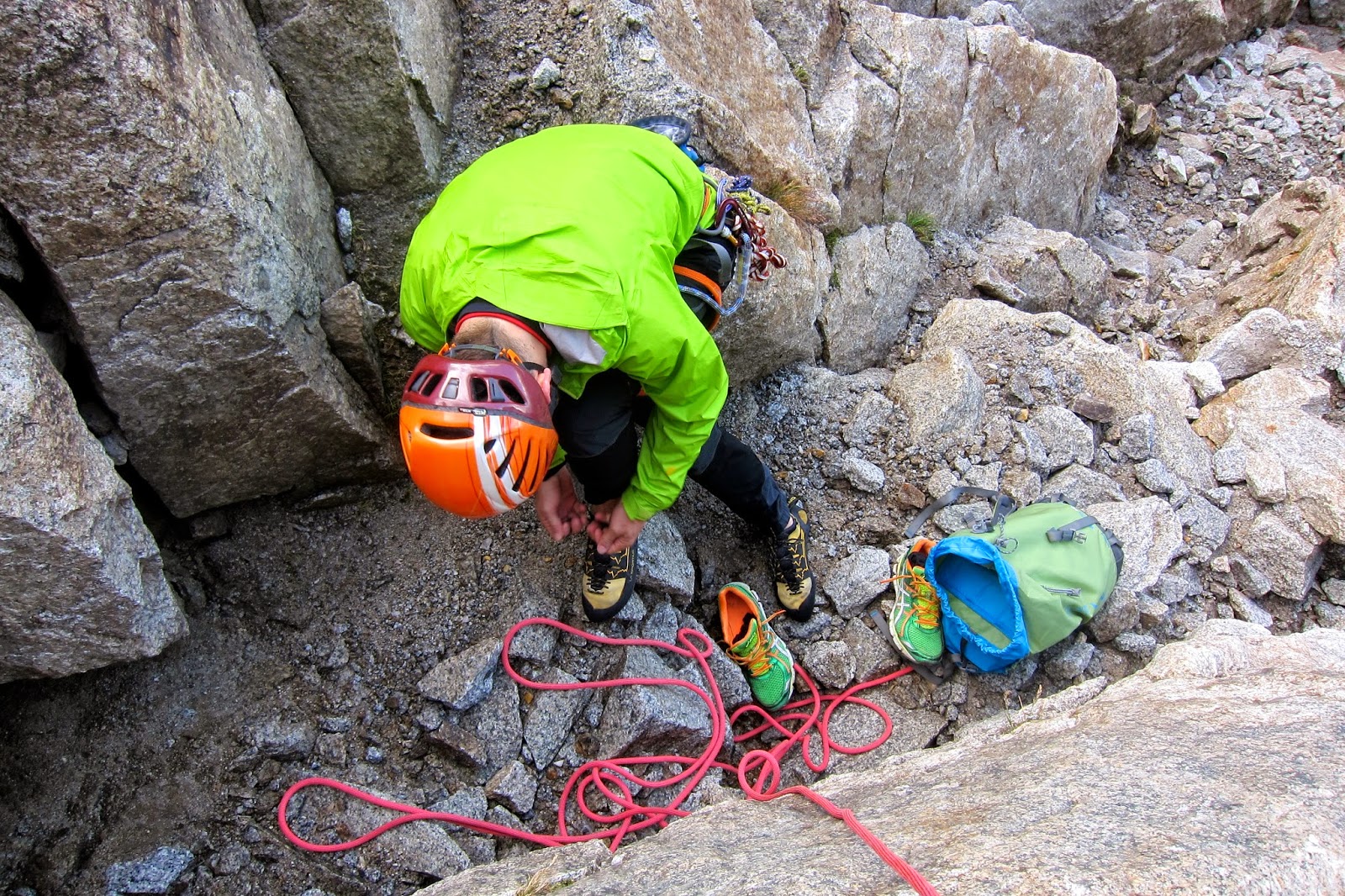 A 2h approach took us to the base of Petit Charmozzz, with the glacier Nantillons actually sleeping. Not a single rockfall or chute the glace during the whole day!

The approach is very much indeed an effort anyhow, the terrain is on the move all over sort of, every steep is either one less or one more as the stones and rocks tent to move along as you proceed. Proceeding with you and against you sort of

Once at the base of the climb the initial start is a bit loose but the higher you go the better the rock gets. A few steep steps and the gully looks impossible, the key is to head a little leftwards. A few meters up there is a good belay sling around a big block. And a little higher plus, there is a couple of pitons, not the best but they show the way at least. And its easy to place some own gear. The given grade of 3c is, well its a number. Just forget it and climb the great rock given, a bit of cussing always help...and the climbing is very enjoyable indeed! 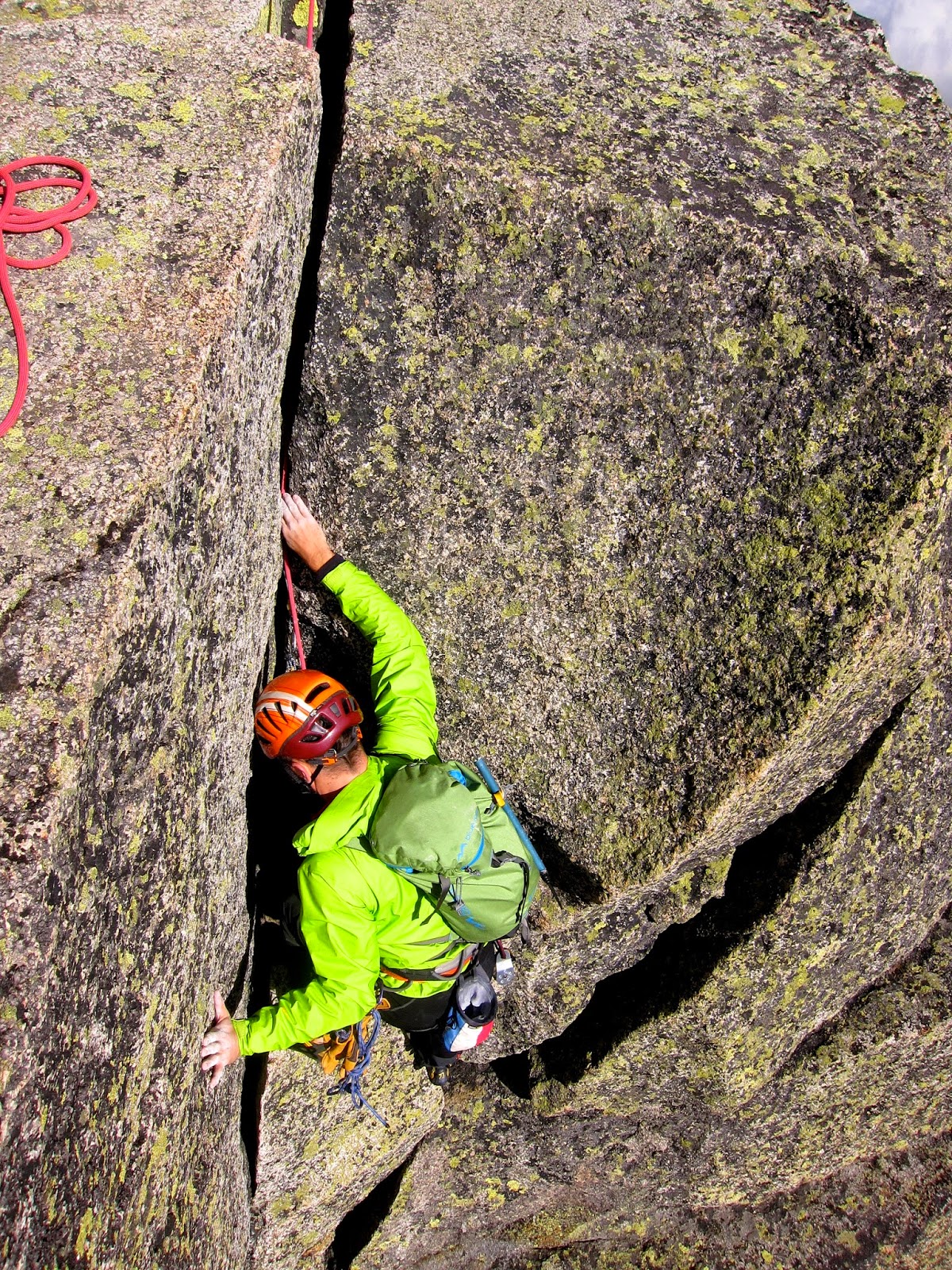 The couple of first pitches on the route is the crux ones, and after reading the col the rest is pure pleasure. Some slings and pitons here and there shows the way and finally the "open book" dihedral opens up. An amazing life blasting dihedral which is like an early christmas package, well maybe not that great. But still....nice 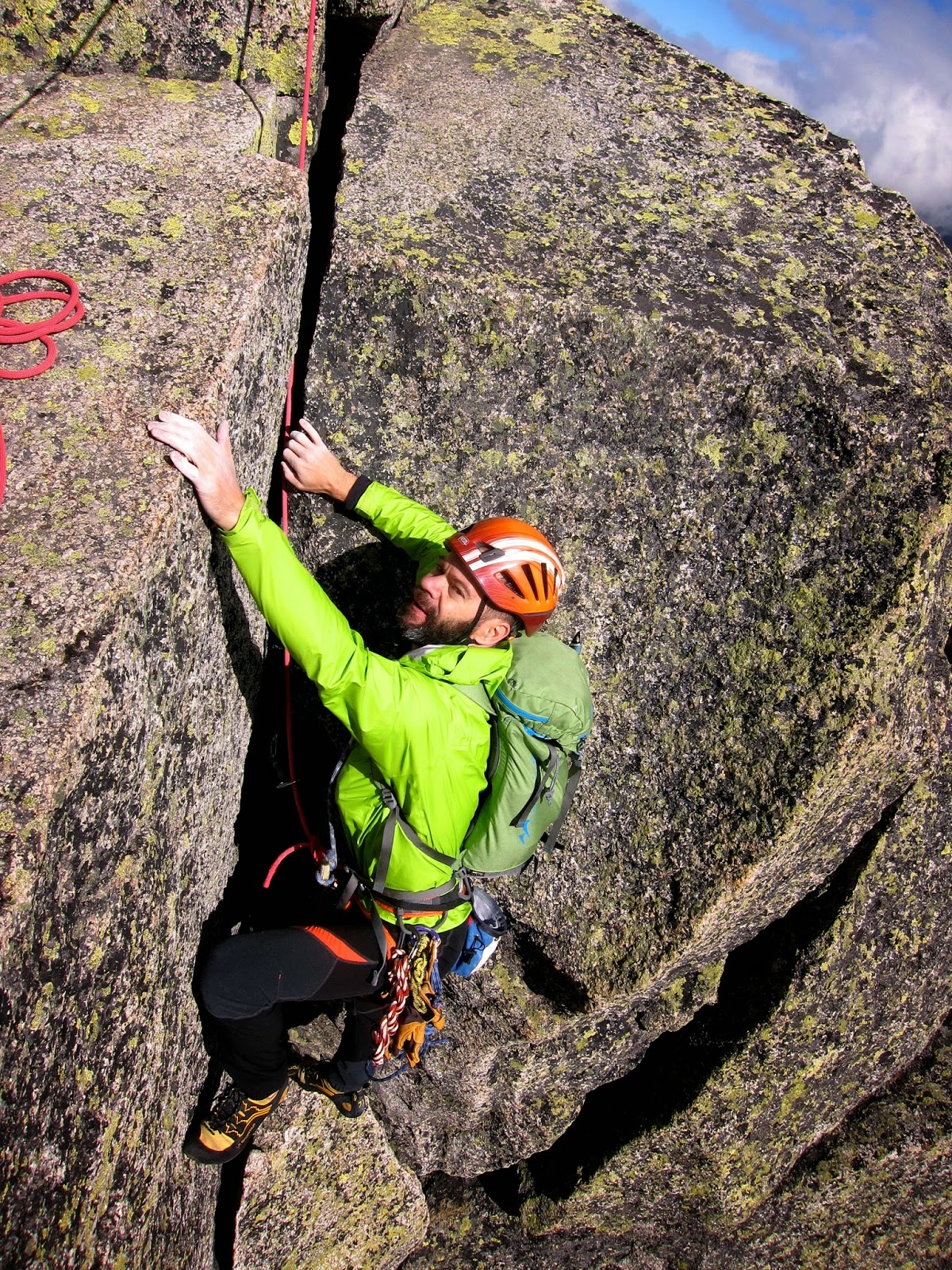 Then,we started to think that "maybe that is the summit"? But then there is a little more of traversing and exposed terrain and once your on the real top, you will notice 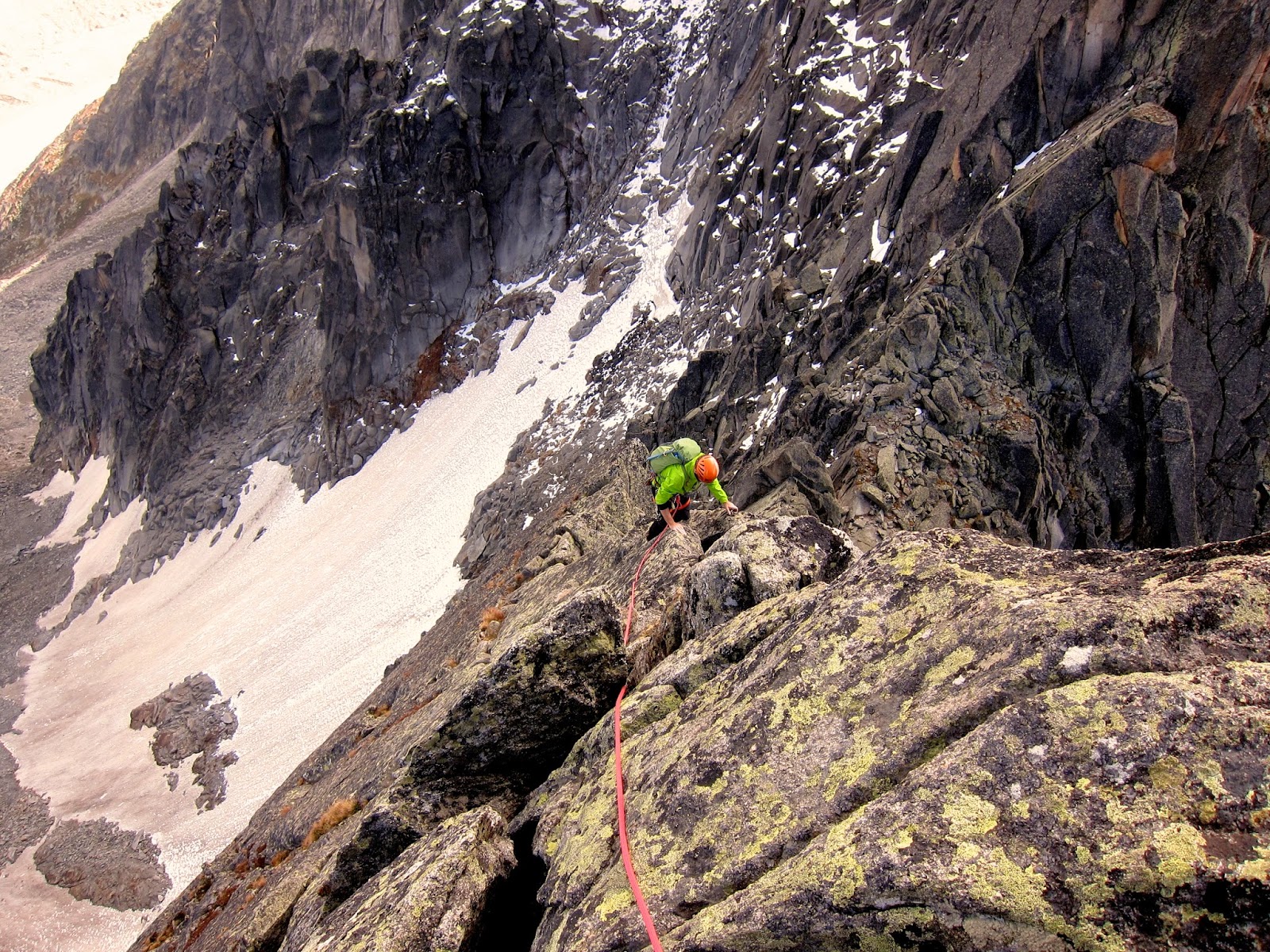 Reaching the Charmoz, just before aig. L´M col the clouds comes and goes, but tries its best to give us an as always stunning view over the surrounding peaks. A moment in peace with the rest of the world, just us, the chouchas and the plain air... 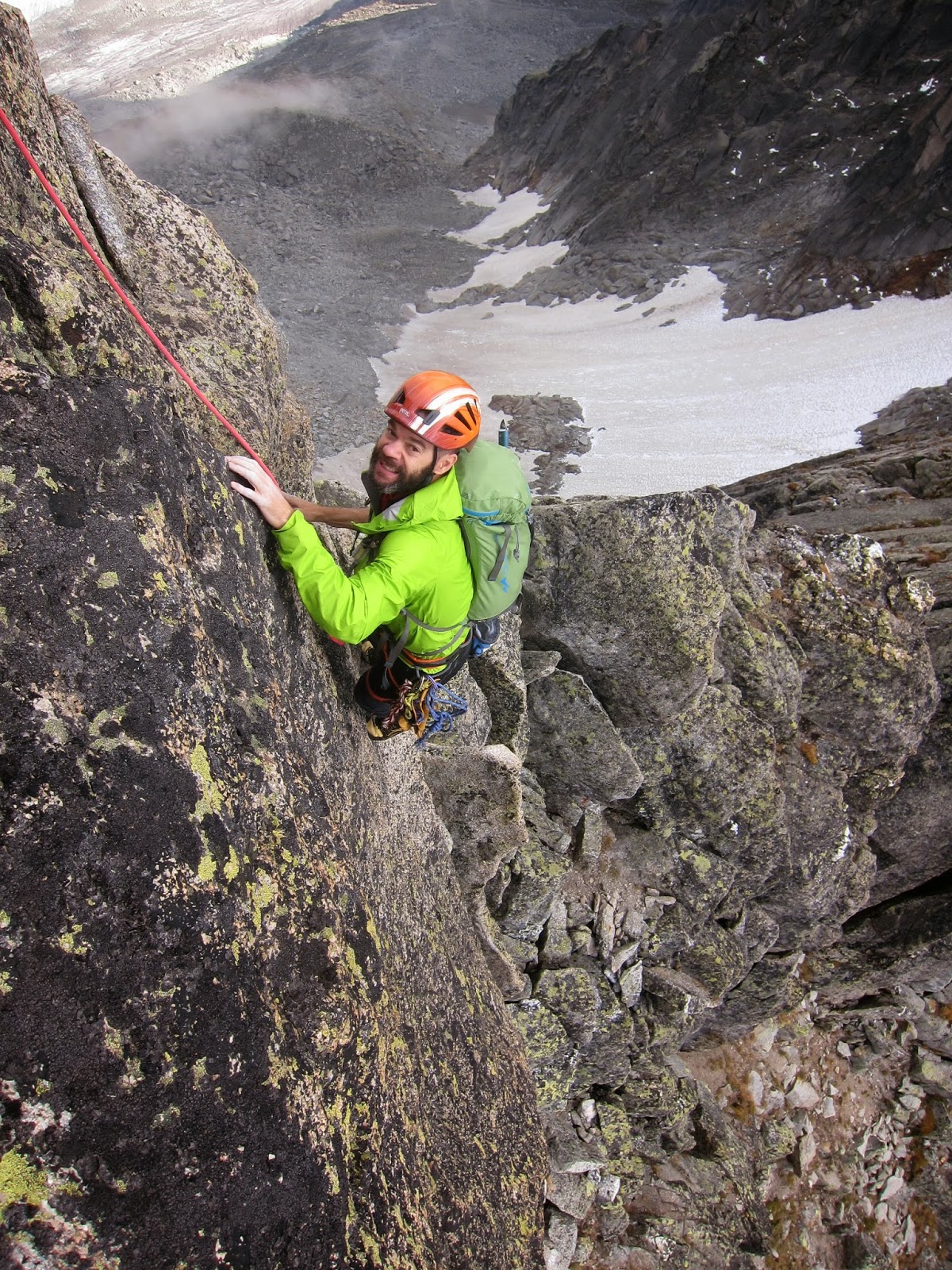 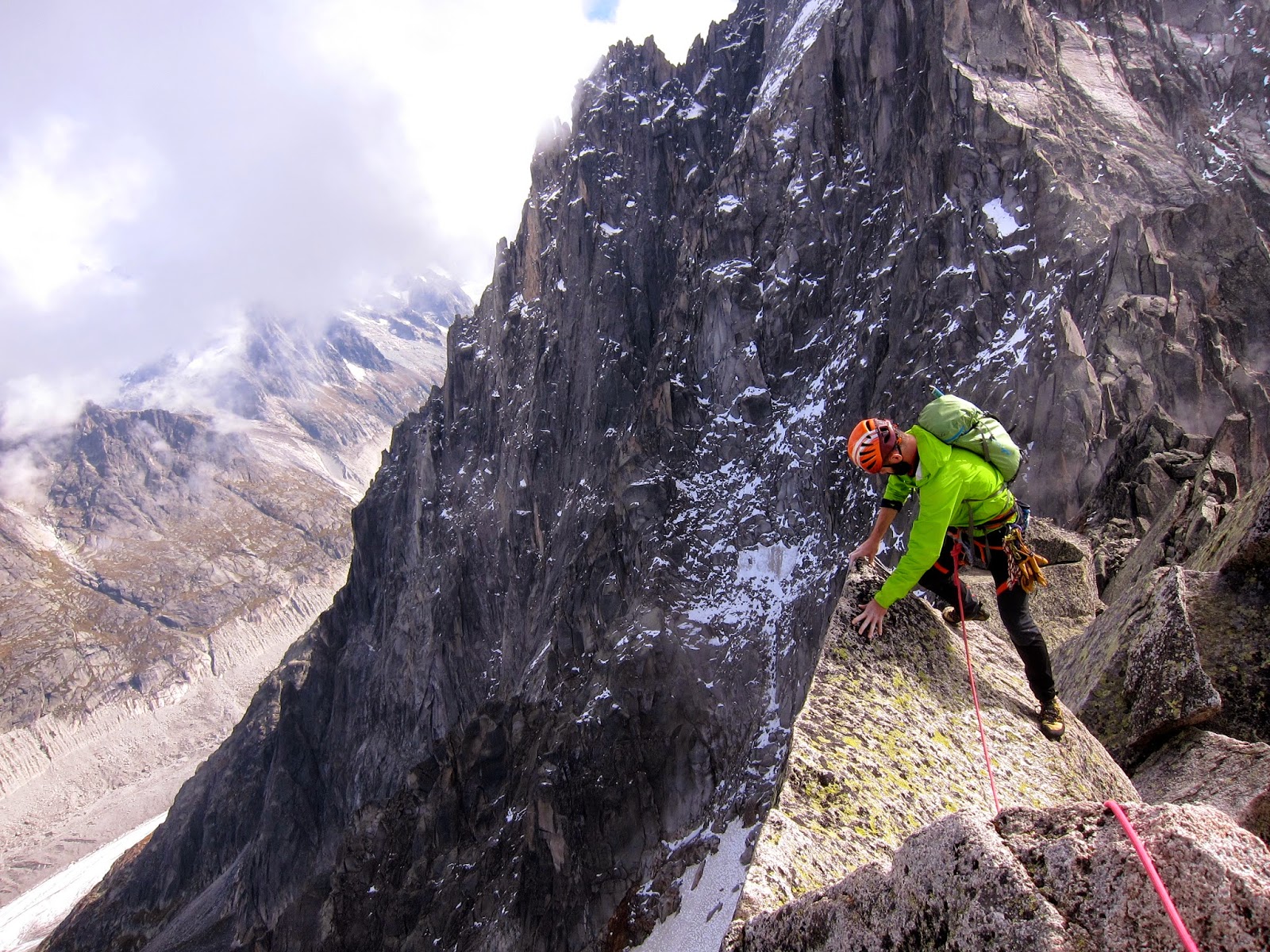 Decent
2 options, right or left (looking downwards) We took the left one which gives two 25m rappels and a bit of down climbing. There is an quite obvious path leading rightwards toward the gully. Which is descended with mostly scrambling/walking. A couple of rappel anchors on the way as well if needed.
Stay first leftward until half of the gully is descended, then head sharp right over some blocks, a little exposed section again and then there is an other path which leads down/left toward the final ladders backdown to the glacier/base 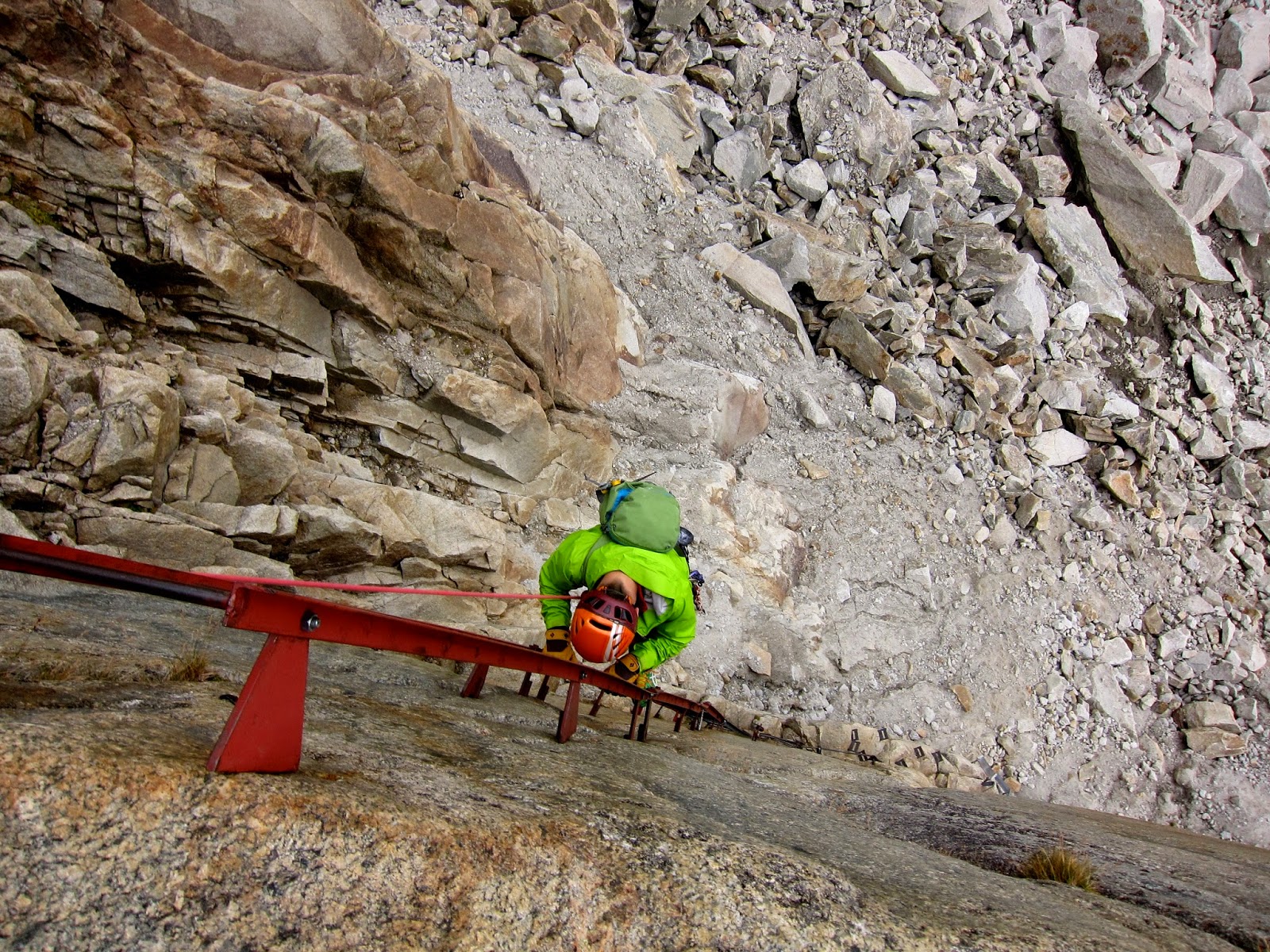 From here I recommend to just head straight down back to the path that also is called balcon nord, the path between Montanvers/le Plan
About 1 1/2hour return

Link to more info at Camp2Camp 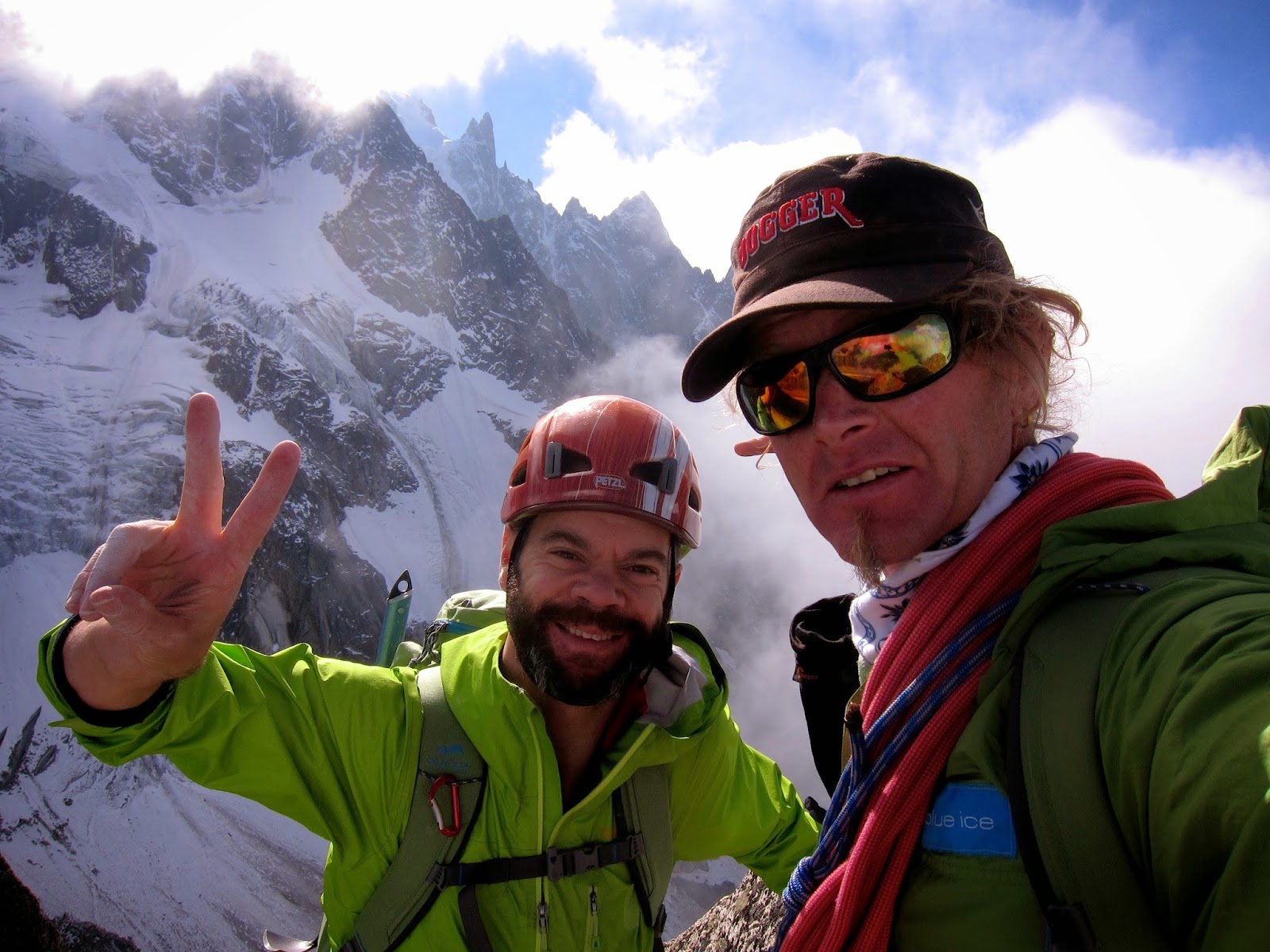