An explanation over the Steep ski rating system also called The Toponeige System. Given a short introduction trying to understand the information given in a topo for both skiing and also with the alpine grades that are normally used for the technical part of alpine climbing, from PD to ED. 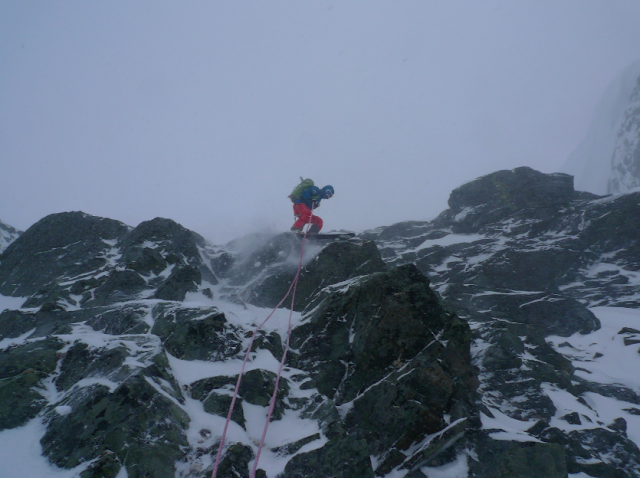 When looking on a ski descent it is often given a, what it looks, difficult to understand grading system.
The ski descents can be described and provided with an alphanumerical character sequence as an example: AD, 4.3, E2, 45°/450m. When knowing how to use and understand this system it describes the difficulty of a ski descent in a very accurate way.
It consists of three separate ratings, such as the required mountaineering capabilities, the ski difficulty and the exposure of the route. Sometimes complemented with the average slope angle and the length of the main difficulties.
It is widely known as the Toponeige rating system (French publisher) or Volo scale, named after its original inventor Volodia Shahshahani. 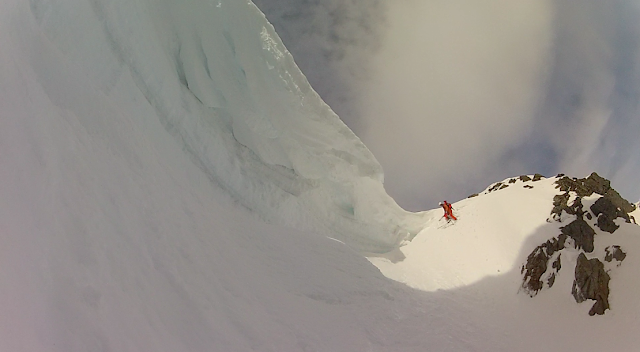 SKI DIFFICULTY
1.x Beginner alpine skiing terrain. Slope angle up to 30° and less than 800m. Wide, open slopes or sparsely treed areas. Exposure is non-existent and in general the risk of avalanche is low.
2.x Few technical difficulties. Slopes are not that difficult (maximum 35°) that may be longer than 800m. Possibly uneven terrain or mild exposure and objective hazard.
3.x The beginning of the ski-alpinism: technical passages, couloirs, long slopes at 35°, short sections of 40-45°. Fairly thick forests on lower angle slopes and difficult forest roads.
4.x Narrow couloirs or challenging slopes: long slopes at 40°-45° (more than 200m), possibly short passages at 50°. Very uneven glacial terrain. Very dense forests even with moderate slopes.
5.x Very steep terrain: Long and sustained steep couloirs, very long slopes from 45°-50° for more than 300m or possibly over 50° for longer than 100m. Includes slopes above 55° that are rarely in condition.
Grades 1-4 are further subdivided into three levels: x.1, x.2, x.3 in order to distinguish between an easy, moderate or difficult severity level.
Grade 5 (“steep skiing”) is currently subdivided into 5 levels (5.1 – 5.5) but there is the possibility of further grades being added as needed. Thus, it is open-ended to allow for further progression in difficulty in ski descents.
5.1 Shorter sections of 50°, long slopes of 45° (500 m), or a section (300 m) with challenging, complex terrain: this grade includes some gnarly chutes as well as large consistent slopes in big alpine terrain.
5.2 Consistent slopes of 50° (200 m long) or very long sections of 45-50°.
5.3 Slopes starting at 48-50° (300 m long). Routes with short but very difficult crux sections fall within this grade.
5.4 Routes considered “extreme” in standard conditions. Pain de Sucre, Aiguille du Midi Mallory
5.5 Col de l’Aiguille Verte direct, Aiguille Verte Nant Blanc 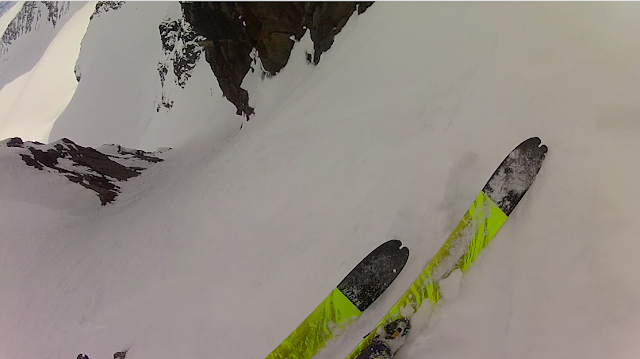 S2: Slightly wide slopes, even a little steep (25 °), or hilly routes.
S3: Inclination of slopes up to 35 ° (the steepest black slopes of resorts, in hard snow). The evolution in all kinds of snow must be practiced without technical difficulties.
S4: Inclination of slopes up to 45 ° if the exposure is not too strong; from 30 ° and up to 40 ° if the exposure is strong or the passage narrow. A very good ski technique becomes indispensable.
S5: 45 to 50 ° or more if exposure is low. From 40 ° if the exposure is strong. In addition to a perfect technique, nervous control becomes important.
S6: Above 50 ° if exposure is high, which is most often the case. Otherwise from 55 ° for short passages with little exposure.
S7: passages at 60 ° or more, or jumping in very steep or exposed terrain.
The ski punctuation rating, complementary to the overall ski rating, assesses the difficulty of the most
difficult ski descent. It is essentially related to the slope, but also takes into account the exposure.
S1: easy route that does not require any particular technique to evolve in safety, forest road for example.

ALPINE GRADE
Overall demand for mountaineering skills. Mostly for the ascent or route access, but also for the slope/face itself (e.g. if lift served), taking into consideration the length, difficulty, and commitment-level of the route.
(F) Facile - Easy routes with no technical difficulties: The route is obvious, as in the case of a glacier with no steep slopes and few crevasses and a final scramble up an easy scree slope or short ridge with no hard moves. In general, the rope is only used for safety on the glacier (for crevasse rescue)
(PD) Petit Difficile - Glacial routes or snow or ice slopes of moderate inclination where the steeper sections are short. Without challenging sections, but requiring proficient crampon technique and the use of an ice axe. Possibly some harder climbing, but that is easy to follow and protect.
(AD) Assez Difficile - Moderately steep slopes often requires some belayed climbing. The party will for example have to negotiate a crevassed glacier (but a small bergshrund),  Grade 4 difficulties on rock or more sustained ice or snow slopes up to 40-55°.
(D) Difficile - Serious undertaking which requires proficiency at a wide range of protection techniques and good route-finding skills. Long sections of sustained rock climbing, steep snow or ice slopes (50-70°) or very crevassed glaciers with large bergshrunds.
(TD) Trés Difficle - Very serious undertakings with important difficulties on rock or long and steep snow or ice slopes (up to 65-80°) that require climbing a large number of pitches. Objective dangers can be important at this level of difficulty.
(ED) Extreme Difficile - Hard climbing on steep demanding terrain, to top it up it goes with -/+ as well as numbers, 1, 2, 3....ED7

EXPOSURE
There are four divisions for exposure ratings. When contemplating exposure, keep in mind: 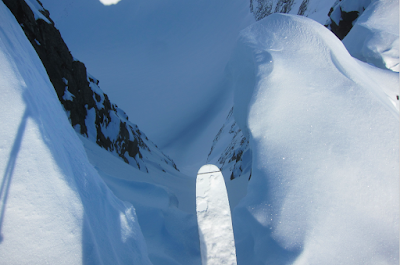 E1 There are no significant obstacles, apart from the slope itself. A combination of hard snow and a steep incline can however present a potential risk for injury.
E2 The fall line includes some form of cliffs that increases the risk of injury for the skier in case of a fall. If the fall over the cliff is unavoidable, there is no risk hitting another rocky section. Moderately winding couloirs also enter this category.
E3 A fall will likely result in the skier passing over a cliff, but the impact with an obstacle is not absolutely certain. Winding couloirs with the risk of hitting rock fall into this category. Death is highly probable.
E4 High rock faces involving multiple rebounds and impacts in the event of a fall, death is guaranteed.