Aravicimes is a modern mixed route in the Aravis massif.  Normally, with good snow and ice conditions its considered fairly easy, up to M4. But with lack of snow, early in the season its a quite demanding hard to protect route with a lot of climbing.
Mostly the harder sections are quite short, but long enough to keep you focused.
Over all an interesting route with a lot of fun!


With a long period of very mild temperatures and strong föhn winds, gale winds in the high mountains and zero visibility, made it really hard to find any accessible climbing.
But my personal mountain detective and wife put in a great job as usually and came up with a few interesting alternatives, one of them "les Aravicimes"
A quick look on the map a and avalanche risk convinced me to have a go.
It might be a blind shoot but when reading the topo I could only think that with the maximum grade of M4;
-how hard can it be?
So we stuffed a few ice screws, tured out to be unnecessary, a small set of wires and some cams and a number of QD,s with the ropes and took an early start from Fayet to La Clusas and les Confins.
The last days of mild weather had made the snow pack more like béton but it only made the 1 1/2h approach easier.
Well at the bottom of the route we found some old footsteps going up and coming down, so we started to hope that maybe its in better conditions that it looks!
The first two pitches turned out not to be described in the french topo. Probably just because there´s wasn't enough snow to have filled up to where the route normally begins!?
P 1 40m of snow couloir up to a very interesting belay point.
P 2 50m, first on thin ice and the snow. Belay on top of a section of rock, bolts 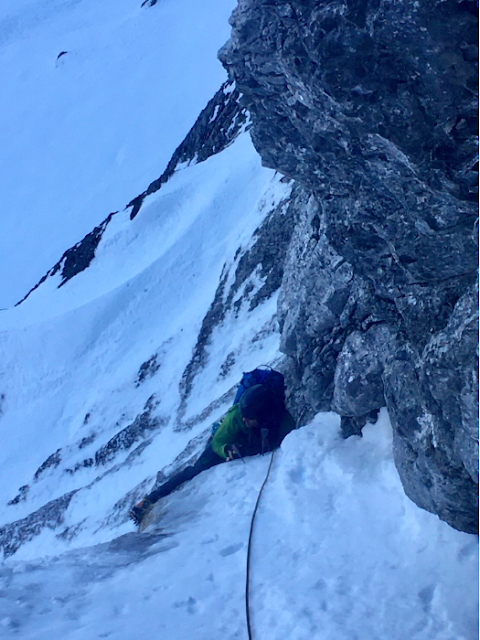 From here it started to look a bit questionable and suddenly the old footprints was gone as well...
A short vertical section which was dryer than the driest martini. But on the left I could find a crack system in which I could put a few pieces of protection to start with at least. In the end i tied off a frozen-in stone and tried to think of my self as very light.
A short traverse out right to some frozen herbs and finally I could swing my axes into solid ice, victory part 1 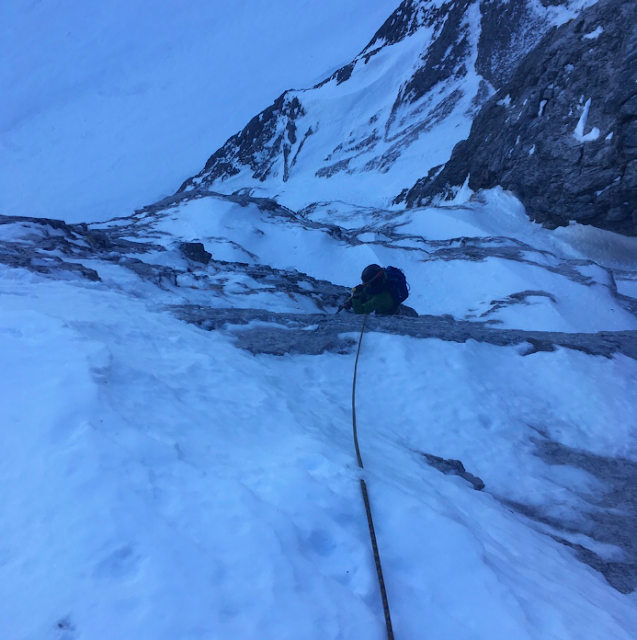 Next pitch, again very easy, but above was again a vertical wall that looked just really dry.
I soon got my suspicion confirmed, desperately looking for anything to place some protection but the only thing happening was time running away. In the end I just have to give it up, retreating down to the former bealy. End of story!
But maybe, a chance to traverse the section around to the right!?
A last desperat call in which at least i could place a few things here and there on the way, ending at a blank wall with nothing except a few loose blocks. But with desperation and a "go light" thought I finally abled my self to crawl up as far so I could bunch the shafts of the axes deep enough to support me.
And I found a crack that took my last few wires.
We was out climbing, super bad dry conditions, but at least we was off-route, great times.
After a long tense traverse back leftwards, we finally was back on track again and now getting covered in spinn-drift.
Luckily it turned out to be easier climbing from now on and slowly making progress... 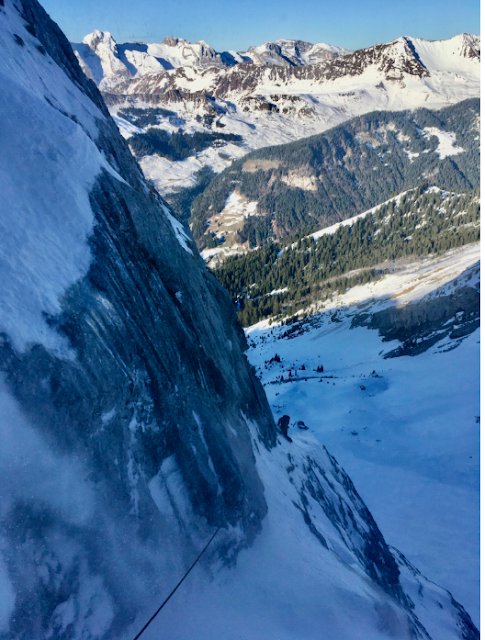 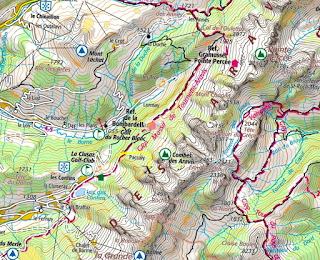 All belays in place
Descend by rappelling the route 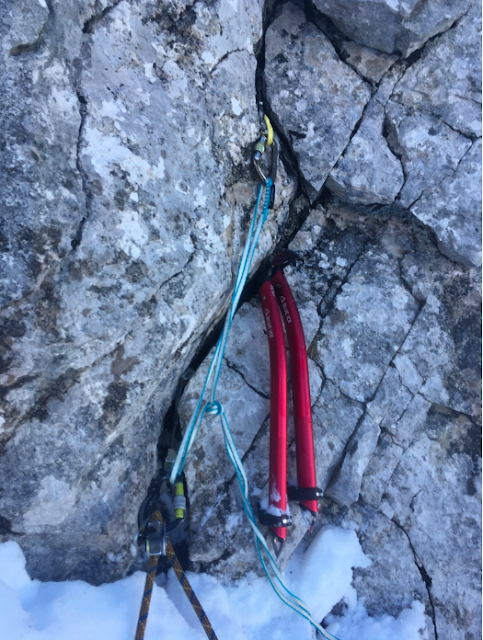 Beautiful suited over the lac du Bourget at almost 650m is the nice climbing sector of la Chambotte.
It is a south facing big section of limestone, well bolted and up to three pitches of good climbing covering over all grades. Perfect for beginners who want to improve or try leading multi-pitch climbing.

ACCESS: You can access it from both sides of the mountain:
1) From La Biolle: located on the N201 connecting Aix les Bains to Annecy. Take the D991B on the left
passing by ST Germain la Chambotte then La Chambotte.
2) From Chaudieux: located on the D991 connecting Aix les Bains to Culoz (along the lake). Take the right
D991B which goes up to La Chambotte.
Park in the car park between the tunnel and the village. There is room for many vehicles if everyone makes the effort to park intelligently.


Pass (on foot!) the tunnel and descend to the hairpin to find the path that runs along the cliff.
Don´t park directly at the hair-pin!

The climbing start directly after leaving the road. And there are many nice routes but I have, so far, three favorits not to be missed.
Sector du Diedre de l´Abre
le Diedre de l´Arbre (6a obl)
Tripaille, Farine, Pate, Riz (6a+)
Both have tre nice pitches 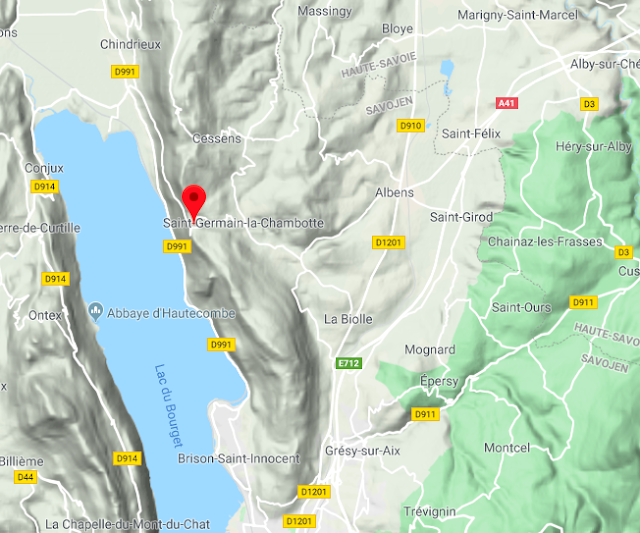 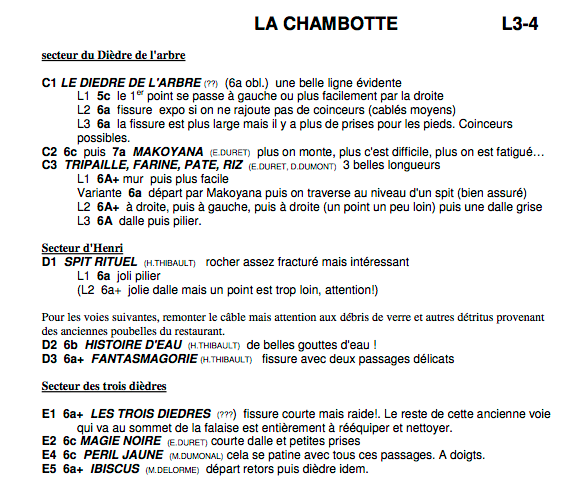 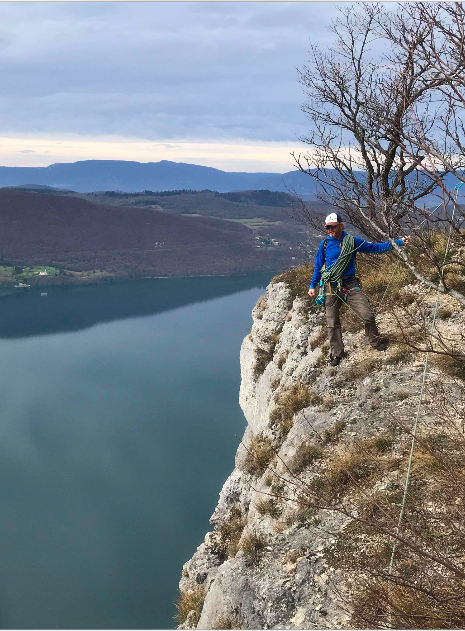 It is possible to climb here during the whole year round, but the summer months can probably be very hot! 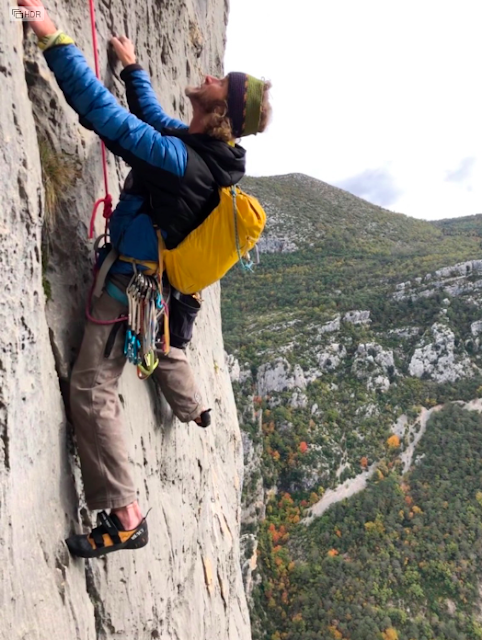 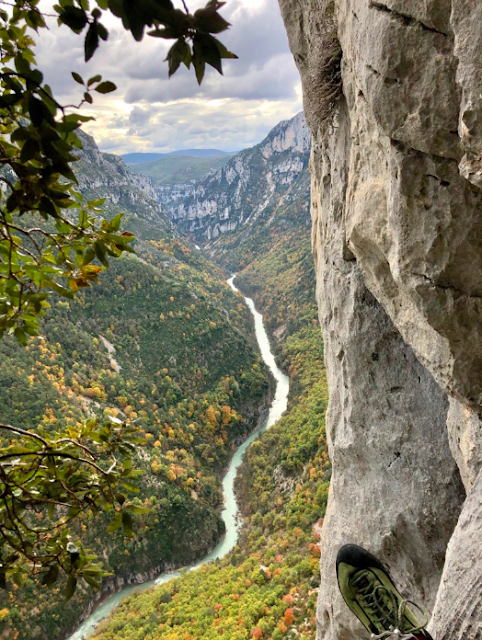 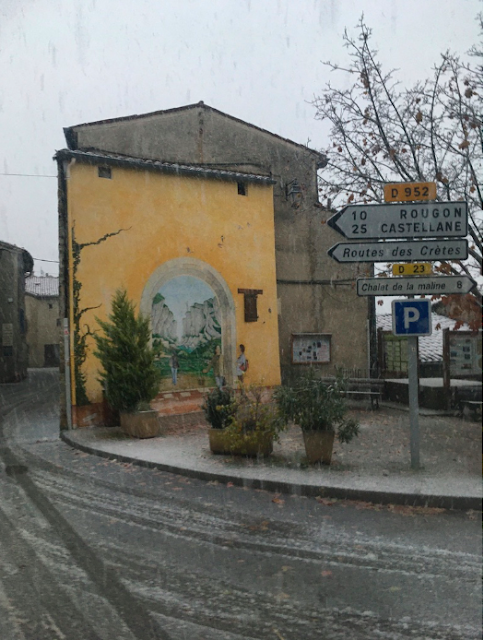 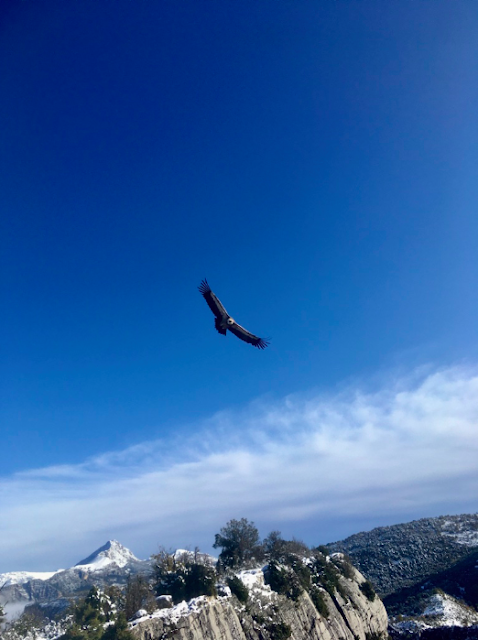 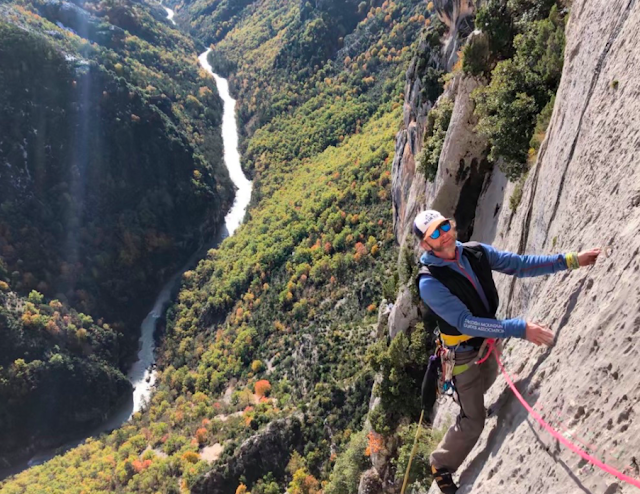