This is not about different types of avalanches or just the risk of skiing off-pist. This is, hopefully, to make you think of the risk of the avalanche scale and what it accually means. 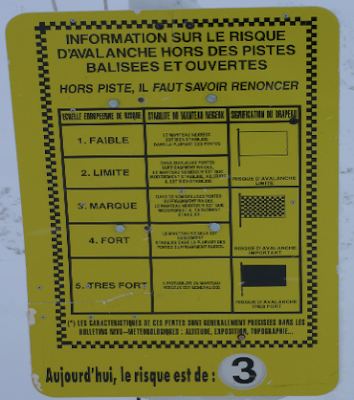 The Commission for Snow and Avalanche Research was founded in 1931. And as the name says, the main purpose was to do research on avalanches.
In 1936/37 the Swiss Ski Association started to give weekend snow reports over their part of the Alps, at that time via press and radio. (for our younger readers, internet wasn’t invented yet) In 1945 todays SLF Swiss Snee institute, took over the responsibility and established the modern avalanche warning system. Every week the bulletin was reported and the releases were welcomed both by winter sport resorts as well as agencies responsible for public safety.The system was improved with telex comunications with Davos, which became the headquarter and still is. In 1989 the reports also became accessible via phone, #187, which still is in use. 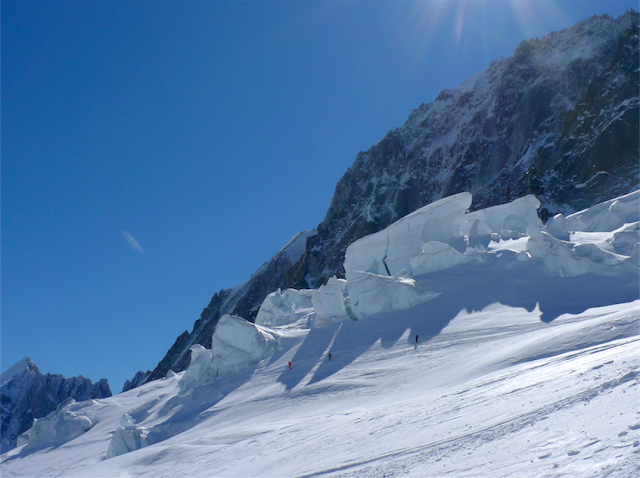 The avalanche danger scale had and still has two main purposes. One is to express the risk that a catastrophic avalanche will threat public life such as roads and villages. The other more obvious in ”skiers” use is the probability of an avalanche in a ski area. But maybe more interesting, to give an idea of the danger outside the resort. Easy put like in the off-piste terrain. 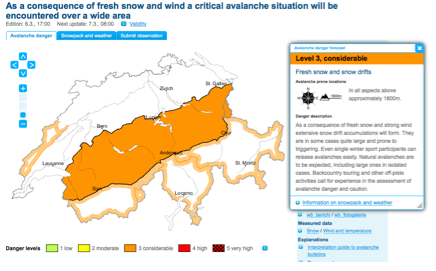 The European Avalanche Warning Services, EAWS, founded a working group in 1983 with the main goal to improve the avalanche system, so it could be used by all the relevant countries, that until then had a number of different scales and levels.
The modern 5 point scale was introduced in 1994, becoming an international scale in the purpose to make it easier to understand. Which maybe was the fact at that time, but is it still? That´s the question!

In my opinion the avalanche danger rating scale is pretty confusing. Avalanche danger rating 3 on a scale of 5 doesn't sound too dangerous. It's right in the middle! So it is easy to think that there isn't much of a risk when going off-piste on a day like that. Something that I often overhear in the cable bin on my way up to the days skiing.
But take a moment to consider this, that while there is different number on the scale, the color on the alert flag is the same for 4 and 3, which indicates a high avalanche risk. One thing that, in my opinion, most people tend to forget about.

With the avalanche danger rating Considerable!! (3) approximately some 20% of the snow cover has weak spots. Spontaneous avalanches of medium size is possible to be triggered, just by it self! The weight of one single skier / snowboarder could be enough to trigger an avalanche. The potential damage danger says it could bury and destroy a car, damage a truck, destroy small buildings and break trees.
So with that in mind, avalanche danger rating Considerable (3) is dangerous!
Just taste the word, considerable. 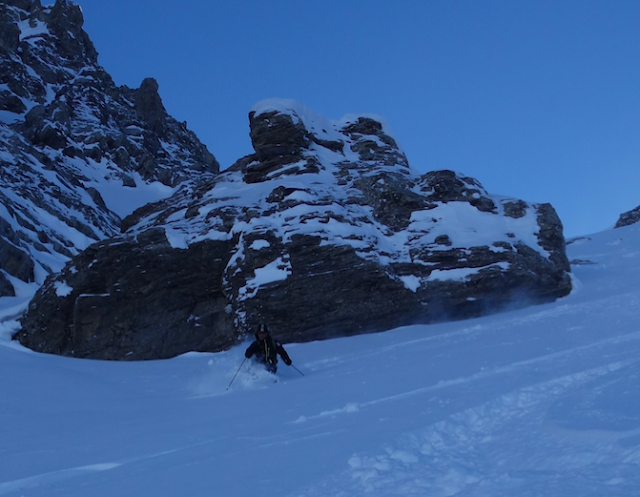 Rating 4 (High) and 5 (Extreme) for sure express the risk of a avalanche even on the gentles slopes with only light load. Off-piste skiing and snowboarding is not a good idea during those rating levels. Most ski resorts will even be shut down completely during avalanche danger rating 5 (Extreme) and many will close already at 4-High. And some would afterwards wish that they had!
Some lifts might stay open with avalanche danger rating 4 (High), but these will only bring you to low angle slopes with no or not exposed steeper faces above them.

Avalanche danger ratings 1 (Low) and 2 (Moderate) on the other hand are more reasonable for skiers and snowboarders who want to ride off-piste. And then we have the unpredictable and in between 3 that express Considerable.

Basicly, the avalanche danger rating scale for skiers and boarders has been reduced to two rating levels, 2 and 3.
Since 4 and 5 isn´t  a free riding day and 1 feels super safe, right!?
This rating on a single 3 (Considerable) claims 54% of the avalanche victims*
Clearly showing that the rating is dangerous for skiers and snowboarders. In Switzerland most of the accidents occur when the bulletin has 2 to 3. Same for Austria. (https://www.lawis.at/incident/?zeit=365&hoehe=Infinity&profile_lang=de&region=everywhere&subregion=everywhere&last_sid=2&last_pid=0&last_iid=0&header=0&zoom=6&centre=47.26,11.39)
The new Swedish system lavinprognoser.se, adds a couple of new features to the origin system. Which hopefully will make the freerider a little bit more attentive.
(source http://lavinprognoser.se/en/Overview-of-forecasts-areas/abiskoriksgransen/prognos/)

The basics
On a risk 3 day, the best solution is to stay away from slopes over 30° and stay focused. Consider the terrain also on a day with that simple 3. Ignoring old tracks and other skiers. And instead think about wind and temperature. Remembering that a 3 on the bulletin in the resort doesn’t mean that is a 3 on slopes outside the ski area. That is one reason for example that when you are skiing in la Balme, Chamonix, and heading out east from the top chair lift of tete du Balme, you have to go under a rope! Meaning, you are in uncontrolled area.

So with this in mind, the avalanche danger rating scale can be pretty confusing.
If you don't have the right knowledge or if you don't know that you can make the right decisions in the backcountry, maybe its a good investment to take part in a course or hire a professional Mountain Guide.

If you want to learn more about the risks of skiing and snowboarding in the backcountry and how to manage those risks there is a bunch of alternatives.
For a good bace and knowledge regarding courses contact SBO (Swedish Mountain Guides) or Mountain Academy.
But most important, don't take the 3 to easy! Consider!! as the color and sign says, Considerable, and don't be a figure over victims!

Finally a day in between work.

But since we or I not really could decide if it was a climbing day or a skiing day, we ended up with both. Choosing a route at the Argentiere bassin, easily accessed from the top lift at Grands Montets.
An other ski in - ski out.
The forecast was rapported sunny in the morning and during the day and then heavy snow and strong wind in the afternoon but more late afternoon and evening.
Just to make it even more interesting we took a slow morning, which always happens after a loong period with work and a lot of things to catch up with.
So it had to be very light and fast if we should make it before the weather front moved in.
Since my light boots still was waiting for new soles I had to go very light with my old Sportiva "Dru-solo". I was not interested to go in my bulky double boots on this.
At 11:15 we was at the telecabine in Argentiere and 20min we got a lift up to the top of Grands Montets. (thanks for the nice help with our reservation at the ticket office and saving the day for us)
At 12:08 we was a the refuge, parked our skis and boots and re-dressed for the hike up to the base of the route.

Arete du Rabouin is normally an easy scramble with short sections of more exposed climbing. 350mts of climbing at maximum 4c. Thats in summer though! A winter ascent can provide so much more, but with the long period of warm weather that we had experienced the ridge should be all clear.
But to really find out, there is only one way!

Already when we put our gear on the clouds starts to build up and obviously there is a lot of wind up high around 4000mts. And some small amount of snow in the air, but still mostly blue skies.
So no worries, yet!
The hike uphill is as it always is when plodding through snow this time of year, sometimes it holds...and sometimes it is up to the waist. Unpredictable. 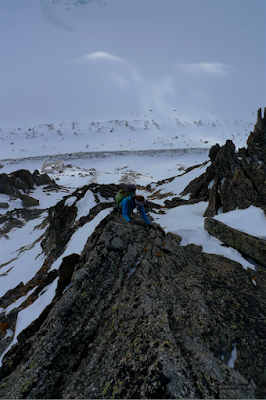 As we was hoping the firsts bits turnes out to be very fast, scrambling and easy climbing.
But then we get to the base of the dihedrals and since the rocks are mostly like bricolage built and stapled on each other it feels best to tie us in on a rope, a single 1/2rope to keep the weight down.
With the gaining altitude the wind is picking up and we are already in our down jackets.
But I have to climb in my "cut of finger gloves" so soon my tips are missing its cover. 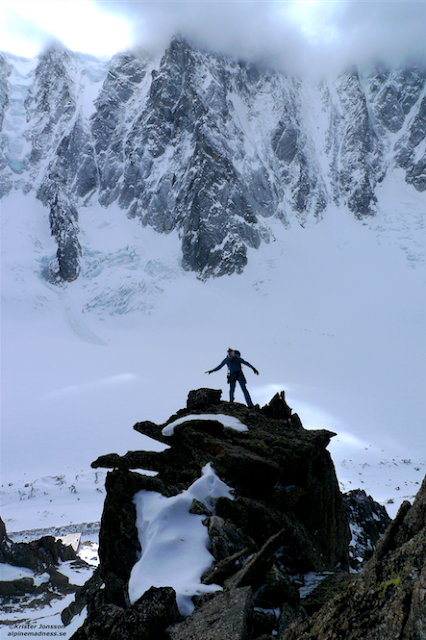 Leading the thing needs full focus here and there and again to keep the weight down we only brought 3 cams and 3 wires, so with spread out pro falling isn't an option.
The climbing is very spectacular and exposed most of the times, but when the sun disappears the fun dropps a bit as well. Still, I made the brilliant choice to stick my feet in my mother´s favorable home made wool socks. But I don't want to stay still to long so the moving is mostly together, only short sections of proper belaying.
The breche at 3025mts and the following Rateau du chèvre saves the whole climb! Super spacey!!
And the following blocs and boîte du lettres keeps us smiling.
And with the smiles the sun returnes on us and follows us all the way up to the summit at 3150mts. 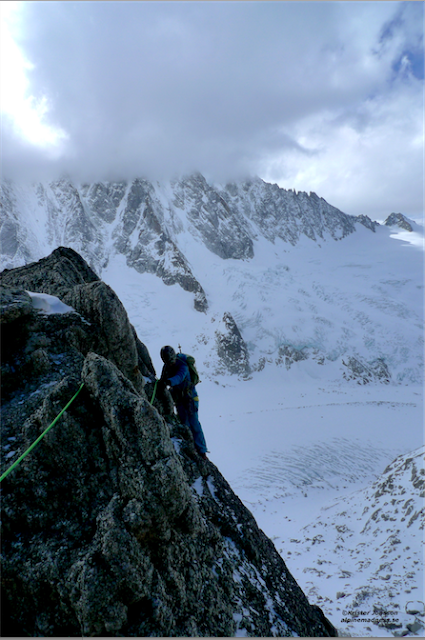 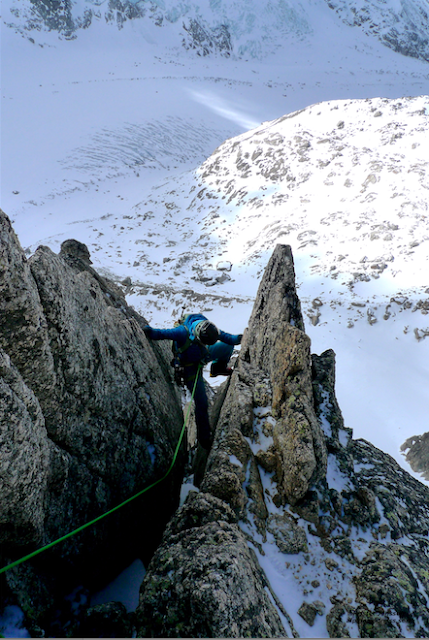 My feets stay warm and nice and it even looks like we wont need to navigate back trough fog and snow!
Down climbing the three etages west to the top of the snow couloir, which we descends easily, but what a waste of the powder, in waist deep snow all the way to the glacier. 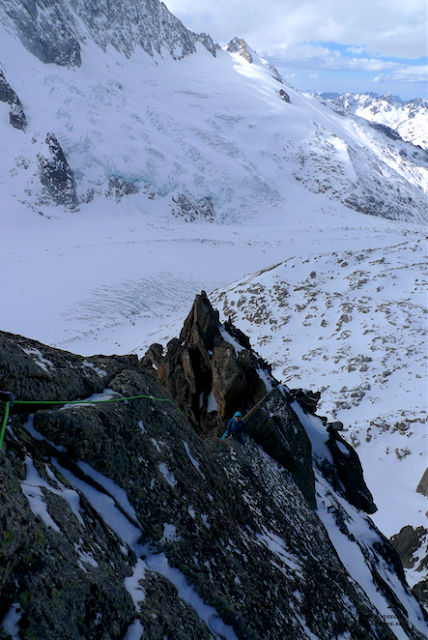 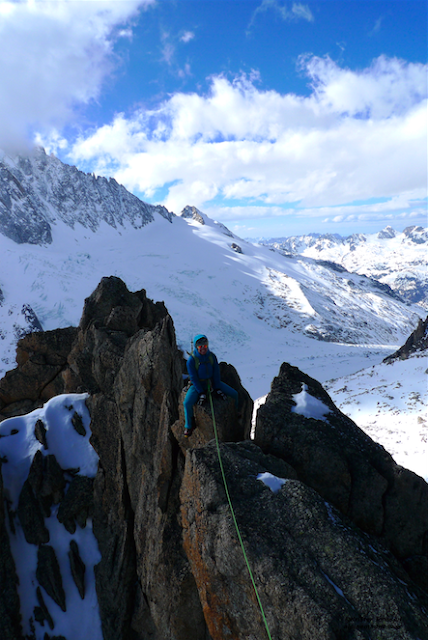 At 15:10 we are back at the hut and can enjoy a nice afternoon in the sun before stepping back in the bindings and ski back down. 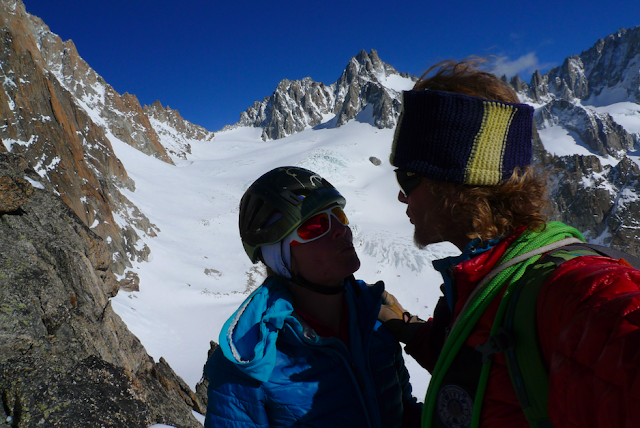 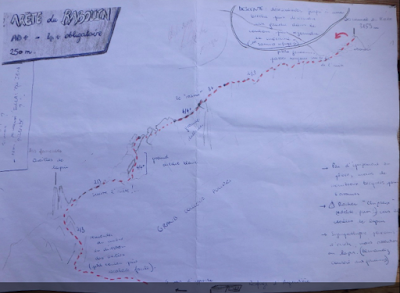 A very interesting climb over mostly solid rock, even though it looks somewhat unstable at some points. Easily accessed from refuge d´Argentière.

not: this is a great example of how it normally goes, the weather holds and the route has good enough conditions as it was expected. Everything works fine; route finding, enough gear, finding the detour etc...
But with only a few mistakes, a couple of misshappenings and a bad weather forecast the smile easily disappears. Changing a great day to its opposite or the last. In the mood to go fast there isn't to much options of carrying much "extras" and "just in case".
In a light down jacket and soft boots life is good as long as it is moving. But on a stop that stays still with no chance to continue you have to have some kind of back up. And that will not be PGHM all the time. When you need them around you can be very shore of that there is no weather for flying. Even though their pilots are on the better side of the skill scale.
So always going with a back up plan and a escape route might bring you back home.
Planning for a possible retreat and what it might mean. Which, specially on ridge/arete climb isn't always easy just to rap of.
There is no "snow cards" or "app´s" to save you here, just pure skills called luck or experienced.