Thanks to Ezio Marlier, an Italian mountain guide from Courmayeur, there is a couple of good easy accessed mixed routes at the Grand Flambeau. Easily reached from the Helbronner telepherique.
It´s east face is definitely only a winter face, since it´s, in quite small words, a bit loose :-)

But, when stabilized with cold weather and refrozen snow, it´s no to bad. And in the combo with it´ s 10min access its a great choice for an introduction of the use of ice axes in the high mountains or when the weather is a bit on the bad side.

Still, at this time of year when the fist lift is at 08:30 and last descent is at 15:30, you have to keep the rope moving at all time to be sure to join the last bin back down. At least if the ambition is to top out!

Sexocet has a short crux section at the start which ones overrun its more M5/M4 climbing. This one aslo as a fun second pitch, steaming up a chimney formation passing under a jamed bloc. 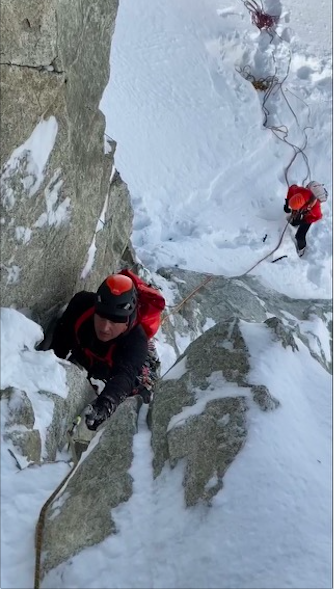 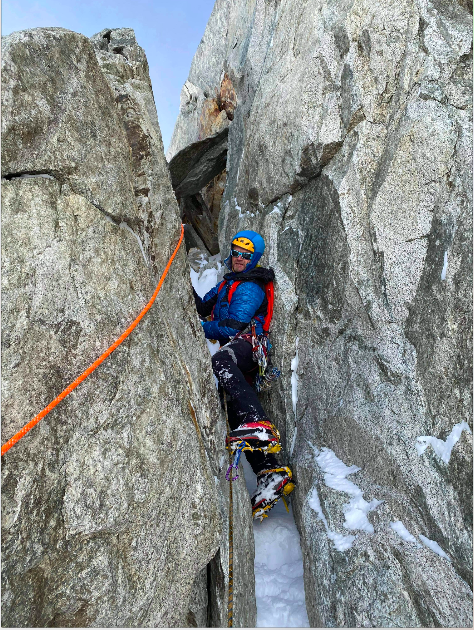 P1: 25m M6  Climb along ice crusts and crack / physical blade, passage to the right in the gully / chimney stop on the left

L2: 20m M5. Immediately a narrow and deep gully, uncomfortable but well protected, coming out of a characteristic hole .... the one on the left is better, stop at the base of the exit corner

L3: 40m M4. Superb exit on the left and non-trivial channel, stop at a bolted belay.

L4: 40 m Go up to the left until you reach the snow couloir and join Monia Mena. On the way there is a large boulder with a bolt, this bloc is totally loose, if its still there!

Continue for another 2 pitches on snow with some short classic difficulties up to the cable car platform, voilá!

Abseil down the route from S3 or from Monia mena if you don´t go to the top.

From the top, go around the iron fence, follow the fixed cord direct out right, and then down the arete aiming for the snow arete below. Scramble down to an other section of jamed wires and some static rope to make rappel off from. 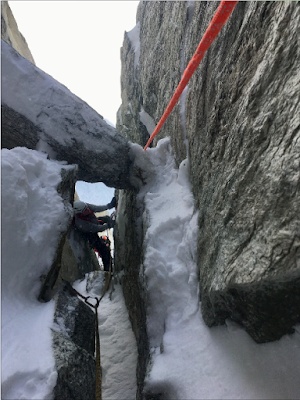 This route has characteristic first pitch with some good climbing which keep one busy over 25m.

Second pitch is much easier and after that your up in the same couloir as Sexocet. But the first pitch definitely makes it worth climbing.

Good protected with own pro and 5 spits

P1: 25 m M7 + long ice crust and final physical overhang, 6 bolts along pitch 3 on the right in the hard pass and one at the exit in the center of the gully, belay on bolts on the right

L2: 40 m M5 immediately a narrow and deep gully and exit to keep ears straight, easy channel (50 degrees) and belay on bolts and cord on the slab on the right

L3: 45 m classic difficulty 50 degrees towards Evidente on the left and then on the right side of the canal stop on the right on bolts and cord

L4: 45 m slightly to the right and go around the rock, returning to the left and stop in the center of the channel towards under the clearly visible steel balustrades

An other nice route on this face, a bit more to the far right side is Cuori di ghiaccio

P1: 25m nice pitch with sections of M5, bolt belay with sling on ledge in the middle of the gully

P2: 30m M7 start up overhang, fairly difficult to get established above this (bolt on the left above the overhang), then gully and not easy exit, bolt at exit and bolted belay with sling

P3: 45m classic winter difficulties, 50° leftwards to the base of the gully, bolt belay with sling on the right

P4: 45m follow the gully and then continue up wide open slopes

P5: 45m classic winter difficulties up to an obvious triangle where the line joins the last belay of Koala pirla