Céüse, in the Haute-Alpes of France, is said to be one of the best places for sport-climbing in Europe. On solid limestone with long demanding routes. Suited close to Gap and on an altitude of 2016mts, its location makes it possible to climb most of the month of the year. But at least for a Scandinavian it will be to warm in the summertime. The nearby drop zone in Tallard is one of the most weather safe places in Europe to go for skydiving. Its some 10min drive from the main crag and the village of Les Roses
The area is best known for its sustained sport routes in the higher grades, Some of the hardest routes in Europe is developed here. And with the chances of getting long interesting falls cause of the distanced length between the bolts.
Something I didn't find to bad on the lower graded routes. But as soon as we started on 7a/7a+ and higher, that became a true fact indeed! 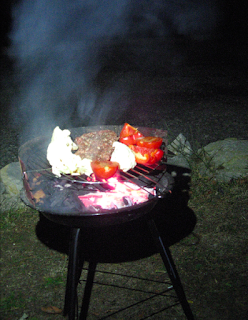 What is a little less known in the area, at least for me, was that it aslo has a few multi pitch routes. And a couple of them which I would say is great classic´s and something you should´t miss out on a visit here.
One of them is "Natilik"

This 5 pitch trad route is equipped with a few pitons and bolts and all anchors in. But to protected properly you would like to bring a small set of wires and cams up to #4
It is a stunning climb on the highest point of the rock face, far out on the north side, right side facing the cliff.  It works it ways trough the giant roofs giving every single pitch its own character; off-width, chimney, face and stuff you might never explored before!
Summiting up on the high plateau of the ski area of Station de Céüse
First climbed in 1981 it still is a very interesting route with a lot of fun. Never super hard, just airy and might even feel a bit scary. I have seen it graded with everything between 5c to 6b+, guess it just depends on if you are used to placing own gear or not. And have been climbing big cracks.
The crux is getting of the roof ledge up over the roof part, but it is well protected with a #2 camalot.

To find the start. Hike up towards the rock face but stay low to start with, easier to take the lower trails. And head out north until you finally reach a fence "no passing - interdict" Allow 1.15h for the approach.
Just pass the fence, ignoring the first bolted routes just before the fence. You will see a BIG crack system heading up slightly leftwards blocked by a big "horn". It might also be a cairn at the bottom.
1st pitch follow the crack / off- width up to the big block, which is passed on the left side, a lot of air, up to a bolted belay. 20mts / 5c

2nd pitch. Continue up the crack which turned into a sort of chimney to the next bolted belay. 20mts / 6a

3rd pitch. Head up the wall passing a small roof, bolt, and then make a airy traverse leftwards. Says "poor protected" but it is possible to get in a few cams on the way. Just remember to place pro for the second 😅 25mts / 6a+

All pitches are maximum 30meters
For the descent
Follow trails north and around back to the base. Or, if low season, its possible to walk south and take the via- ferrata down. Just walk down to the sign. This is much quicker but will catch a lot of input if its people coming up...
It is also possible to make a rappel on the route to the left, but then you will need 2x50m rope

Equipment
For "Natilik"
50m rope, 5-6 QD´s (longer ones useful) a few mid size wires, cams from #0,5-4 (BD camalots)
All belays are bolted and it was re-bolted 2015
First ascent 1981 by Philippe Macle et Jean-Christophe Lafaille
Places to stay
Les Roses and Sigoyer
There is a camping close to where the trail starts up to the cliff. And aslo a few AirBnB´s

Food
This is a tricky one. There is no shops in the close area, not even a bakery in low season!
The closest one is at Gap-Tallard.
From Sigoyer, take the D219 down to Gap-Tallard. At the roundabout there is an Intermarche visible towards Gap.
There you also find the Drop Zone area.
Other places close by
The drive to Orpierre is only an hour away. Nice place if you want to change and have really short approaches for a change. It also has a lot of great climbing but also much more crowded!
Stay away during the mid terms holiday in november!! 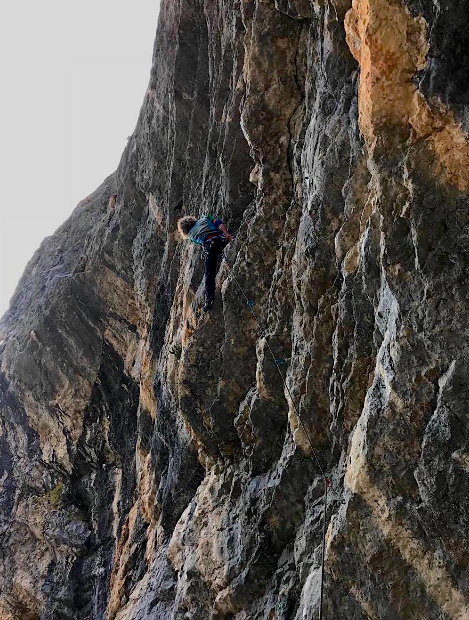 the Climbing on Tours d´Areu in le Vallée l´Arve - Chamonix, is one of the best spots to be found if you are looking for solid high quality limestone. Luckily the approach is far away from every true sport climber, calculate at least 2h of walking, which keeps this place out of reach from most of the lazy bolt clipping craggers!

The approach is best done from Burzier up to refuge de Doran. Hopefully it is open, because they serve the most delicious blueberry cake that you can imagine!
The climbing it self is pretty obvious, the five towers are well announced above the refuge. 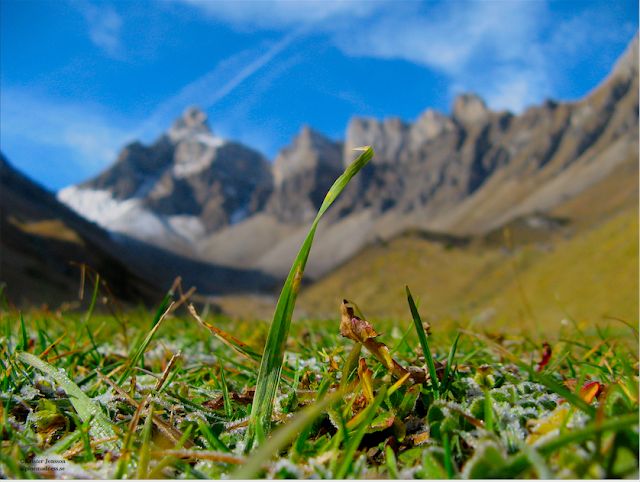 Just follow the trail leading up towards col de Forclaz, almost up to the base of the first tower and then join the track heading out north under the towers. Aloud an other hour for this depending on the weather conditions. It can be very warm during the summer months!
Well at the base there is a number of great escapes as long as you are happy with 6b and upwards. A new bolted classic is the "la Vie de Garcon" 6c. A five pitch route on the forth tower which goes like;

And since it is Haute Savoie grading there is no "charm offensive" for the tourists 😁
The good thing is that it now at least has new bolts (2013) and not to far appart either. Which makes this route a most challenging but perfectly safe day on a brilliant rockwall with the most beautiful surroundings, Massif du Mont Blanc. 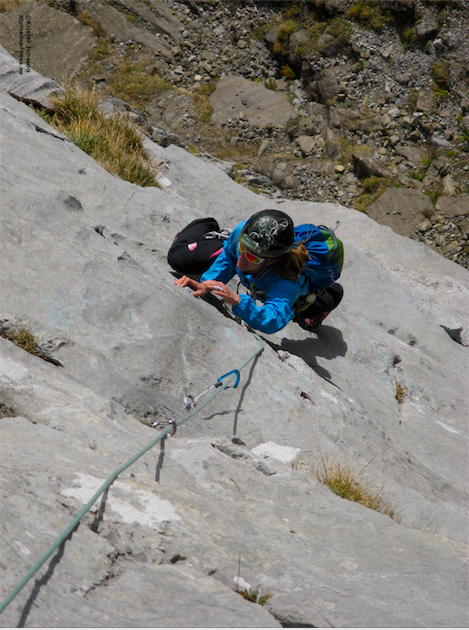 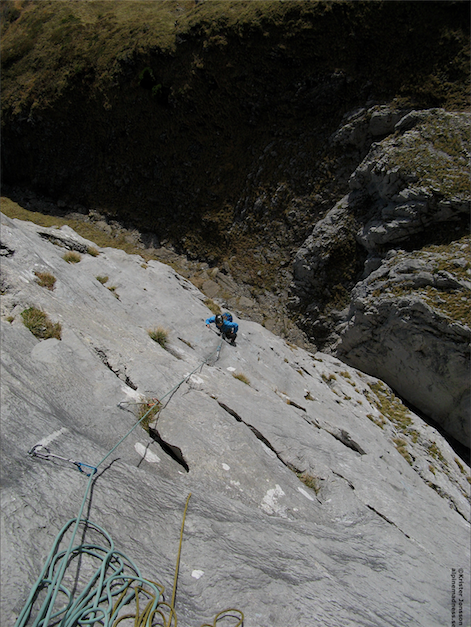 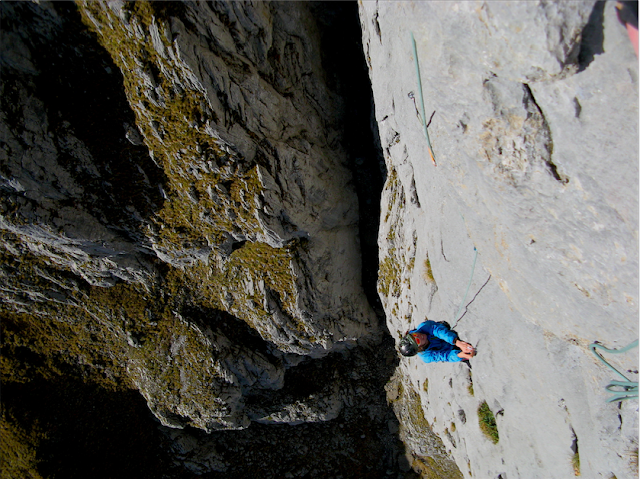