Ropes - the importance of your life line Part ll

This is to refer to a couple of often used techniques to join 2 ropes together.
Mainly discussed is the Flat overhand knot, Reversed figure of eight and the last Flat figure of eight.

After summiting a climb, I always prefer to walk of the route. Rather taking a somewhat longer hike than rappelling the whole thing. Specially if it a new route so it would mean that I have to leave a bunch of stuff. Depending on how difficult the return by foot is of course.
Rappelling also involves the chance of getting a rope stuck, specially on a low angel route as well as more damage on the ropes. So in total: a higher risk.
For me it aslo take some of the good feeling of the accomplishment to summiting. But thats more personal...

With that in mind it´s always a good thing to calculate plus and minus / red and green, which return is best. But sometimes its not possible to avoid, it just has to be reversed by rappelling!
With that said, most of the accidents tend to happen on the descent, for many different reasons.
Most of us that has put in load of rope lengths has probably had some kinds of incidents, if not I´m just there to congratulate!
In my case I have been close to have ripped anchors, a couple of times missed to clip in both ropes in my rappel device, discovered just before putting weight on the ropes: bouff😅!
Roped stuck both above and actually below me, with a rope jammed in a crack.
Stones and rock falling of with the rope when pulling it down...well the list can be long. But, I can only say that so far I have been lucky many times but most of the times just taken good care. Still, things can go wrong.

One thing that will improve your life line is how you tie the ropes together. Since that is something that just would suck, the day that the rappel comes into a free fall just because the ropes open up.
With no discussion the best thing is to use 1 single rope, so there is no need for a knot.
Easier to pull, less chance of getting stuck and no risk to open. And many times there is enough with just one single 60 or 70m rope to get away with the rappels with out joining two ropes at all. So don't just go by instinct, instead figure it out if its needed to tie ropes together at all.
But if there is a need for say 2x50!
In my case I tend to use two different variations of knots or bends they also can referred as. Which one I use is only depending on the ropes and diameter.
1/Rule number one is that always generate some force on the knot to make it tight.
2/Rule number two is to leave enough rope after the knot, some 30cm or two fists of spare rope.
With that said, don't make them way to long because then there will be other problems.

The favorite which most climbers seems to use it the flat overhand knot / flat overhand bend.
And there is a number of reasons why and here are some of them listed, pros and cons.
Advantages:
+ Easy to tie and easy to open
+ Safe and very strong
+ Low profile
+ Slides easily over object and less chance of getting jammed

Disadvantages:
- Has to be put under some force and tightened properly
- Needs rope with similar diameter. UIAA recommends within 3mm
- Can slide. So major important to leave some 30cm extra rope.

Alternatives:
It is a possibility to tie another overhand knot to prevent sliding, but then the whole idea of being easy to tie and less risk of getting stucked is gone. So in my opinion that is just a way of getting one good thing to bad.


The reversed figure of eight

Personally I use this variation when I have two ropes with different diameter or with very slippery ropes, like a brand new one that has a very hard sheet.
As I often climb with a tagline, this is the technique I often use. With my 9mm lead rope and a 6mm tag line the knot produced by a Reversed Figure of Eight becomes quite small.
To tie this I leave less spare rope on each side in about 15cm / one big fist.
Advantages:
+ Strong and secure
+ Safe with two different diameters
+ Easy to pull
+ Flat profile

Alternatives.
As with the flat overhand, it´s possible to add a extra back up when tie this. But once again, it only comes with disadvantage since it becomes more awkward to tie and more likely to jam. Leave some 15-20cm, one big fist, on each side and put in some stress on it. Same thinking as when tie in the harness!

There are a few other ways of joining two ropes together. One is the Fisherman's knot.
Which can be considered as very safe, as long as again there is left enough spare rope on the ends, but very hard to open and slow to tie.
An other is the reversed water knot which should be mainly used on slings, not for rappel ropes!
And then the last one here to mentioned is the flat figure of eight.

Since the figure of eight is used by most climbers when they tie in to their harness, many people tends to think that this would be a safe thing for joining to ropes together as well.
The problem with this knot is that it looks safe but produce the opposite. In fact it has been the cause for a number of people getting killed because it has opened when rappelling.
Accident rapport from Zion 2002
The biggest problem with threading ropes together like this is that the Flat figure of eight tends to easily roll over it self. So even with long spare rope it can roll and collapse and actually open.
Since it also takes away any of the advantages the Flat overhand has with its low shape and easy to to pull and the advantages with the Reversed figure of eight, which is super strong. There is just no reason to use the Flat figure of eight!
And the worst thing you can is using this knot to tie slings together!!

In my opinion, since there is non and any pros for this knot the result is just stop using it and learn everyone the two more proper ways of joining ropes.
The reaction on showing students or novice climbers to the Flat overhand is that the reaction is often
-is that all!?
And as a consequence they use a Flat figure of eight instead, which might look safer. But test showed that it rolls easier with less force.
An other reason can also be that when climbers are teached to tie in their harness they often are told to add some extra spare rope which then are locked with an fisherman knot.
Which actually makes people think that the strength in the knot is the last locking knot!
Instead a more proper way is to learn new climbers to use just enough rope for the tie in. Something I also  think can improve the way of thinking regarding other knots and bends.


So, you have joined the two ropes good together, made the rappel and guess what, the ropes get jammed in a crack!!
What to do?
Reach out for the next upcoming article on this site...

//Sometimes leaving is just a consequence when nothing is there to hold back
Upplagd av Krister Jonsson kl. 3:46 PM No comments:

The Aiguilles Rouges and Super Jacques at Aig de Praz Torrent is if not the best at least one of the nicest and most beautiful routes in the Rouges massive.
Its a five pitch route at maximum 6b+, but it is a Piola grade so its useful to be a bit balanced on the feels, and wearing good shoes, like 5-10´s😎
The quality of the rock face is on very solid gneiss and is mostly good equipped, reebolted 2006, with good anchors all the way.
The descent is best done from the summit, from the ridge north of the summit. Just follow the obvious path following the ridge north and sometimes a little bit below on the east side, to a well visible rappel point. Which takes 2x50mts ropes for one rappel.
Start the approach from the higher parking spot, just before le Buet, with the sign for Aiguille de Praz Torrent. On the left side of the road driving towards the Swiss border.
Just when you reach the Poya ski area there is a sharp left bend which takes you to the upper path towards the aiguilles. 1 1/2 - 2hours approach.
At the base of the cliff there are two routes starting close to each other, Super Jacques is the one to the left.
Further and higher up to the left is the classic of the face, "Voie Parat-Seigneur" 6a. 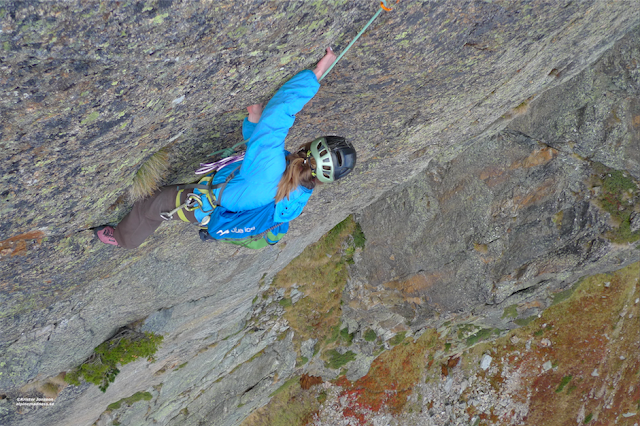 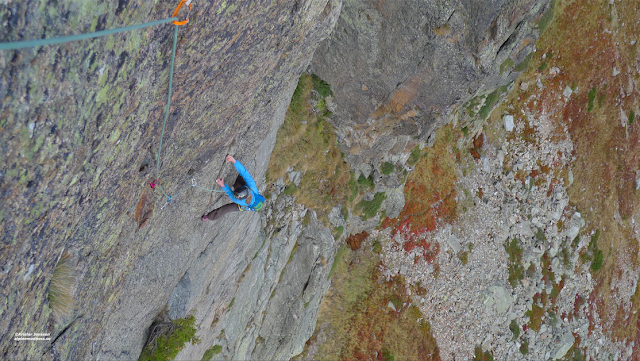 Once at the last belay, easy scrambling with one exposed step takes you to the very top.
From here it is some what walking after the ridge northwards/east side to a good rappel belay.

And, after the rappel some downhill scrambling "a la variant de la chier" back to the base...