Once voted as the most beautiful mountain in the world by Alpinismus magazine in 1966.
Alpamayo is in the Huascarán National Park in the province of Huaylas, Peru and it rises to an elevation of 19,511 feet.
The closest bigger town is Huaraz, a very nice Peruvian town some 10hours from the capital of Lima 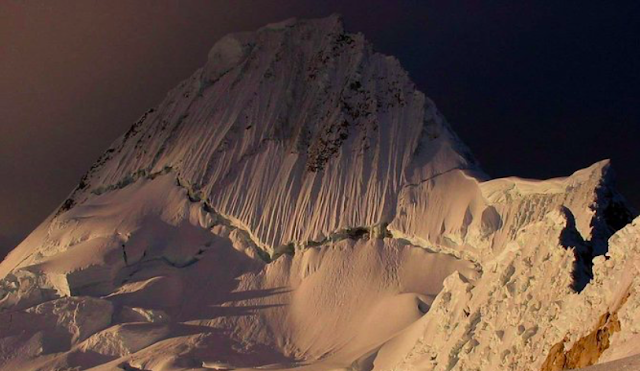 This has been one of the mountains to climb one day on my "must have to do list". I bought the topo over this area long time ago when I picked up my interest for mixed- and expedition climbing.
And after my previous trip to Argentina and Patagonien the Cordillera Blancas of Peru was the next on the list in this part of the world.
So when I got the question of going there to guide it, well the answer was easy to make!

The flight over to Southamerica from Europe is not to bad, if you can find the direct flight from Spain. If you end up hip hopping between all the numbers of airports between Peru and Geneva, well then its an other more demanding and boring story!
Actually the best way to do this flight is to buy a one way ticket to Lima and then buy the retour direct in Peru when time is up to go back home. Its 1/2 price on the flight in Lima instead of buying an expensive ticket aller retour from Europe.
Once at place we had an arrangement with a local Lima man who supported us to the busstation in Lima for a direct trip up to Huaraz. An eight hour trip on good roads with a great comfy bus. We took the night bus which meant that we didn’t miss any time really and the bed was included with the ”Bus & Bed” service.

At Huaraz we had found a great local place to stay at a private Gite, Zarela Zamora López, some 10min walk from the city center, away from the traffic and noise.
Ackommodation is good, breakfast is ok, but its possible to order extra ”supply” with great plates of fresh fruits and müslie. This we quickly finished and headed out for an afternoon acclimatization tour.
Around Huaraz there is a number of high passes and beautiful places to hike and scramble up to, all around 4500 and up to +5000meters.
We made a couple of easier treks and scramble tours around the town, taking day trips from Casa Zarela. And enjoying the great number of restaurants in town in the evenings.
After a few days we headed for a 3 day trip to Pashpa and Ishinca.
This valley is surrounded by mountains with the highest one, Palcaraju 6274mts, clearly rising high above the Ishinca refuge.
As the first day of climbing we headed for the lower part and the south peak of Palcaraju Ouest, 6110mts
via the South West ridge.
Second day we therefore took an easier day climbing the Nevds Urus 5495mts, before heading back to Huaraz and a great meal at Creperie Patrick.
After a est day climbing some doubtful rock at los Olivos. But, for a couple of hours play its an ok, but not more, place to hang out. But, be prepared for a very warm session. There is also a lady with a small dog walking around claiming money for climbing there. 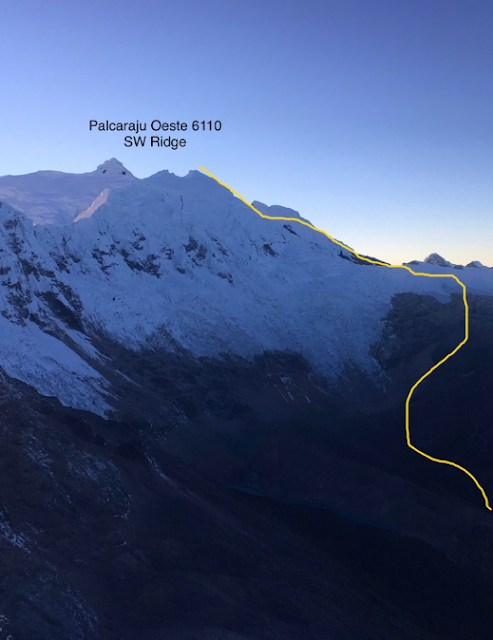 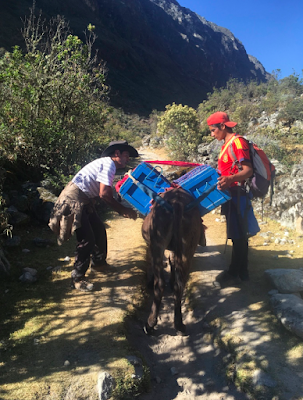 Finally we was ready to head for the main goal, Alpamayo was waiting with a nice sunny spell of good weather.
Conditions suposed to be good a and all things set for an interesting week to come.
The drive up to Cashapampa passed better then suspected on good roads and the hike up to BC is a nice trip by it self. We did it over a 2 day hike which made it most pleasant and enjoyable. Perfect time to listen on a bunch of down loaded pods in-between inhaling the nice views.
We also found out that we had gotten us the best cook in whole Peru, who continuously served us with great food. Almost so we didn’t want to leave BC!
When making the last plans we decided to make it as light and quick as possible to try to climb Alpamayo via the French Direct. A route that probably should have been named American Direct, since it was first climbed by two Americans. But with an tragic accident with two french climbers getting killed by a sera fall it was named French direct.

The French Direct follows a prominent snow and ice flute in the middle of Alpamayo's iconic southwest face via snow and ice runnels that ends abruptly at the airy summit ridge. Sometimes reaching the highpoint is too dangerous of a proposition, and plenty of climbers have called it good after reaching the summit ridge. People has even died falling through the corniced ridge.
This year, 2019, the conditions turned out to be quite good.
We established our high camp at the line between the glacier and the moraine, usually called Moraine Camp at 4900mts. And then made plans to make an early start to go direct for the summit, without the Glacier Camp.
A plan which I think with light and right equipment is the best choice. 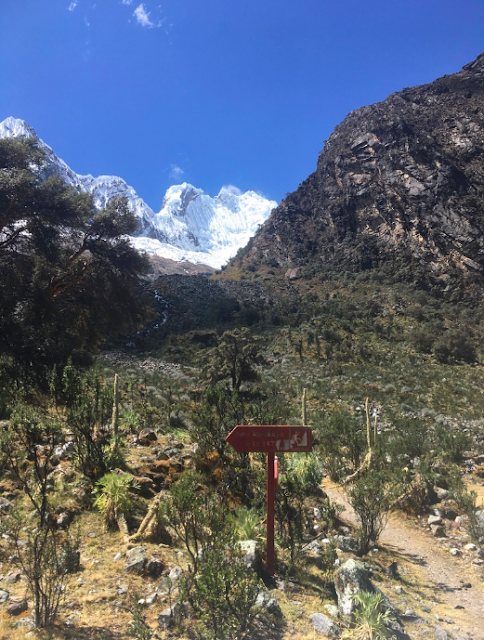 So with a 23:00 breakfast call we was ready to leave our home at 01:10
Moving over the glacier and up to the col was super fast in the frozen conditions to the col at 5400mts at 03:30
To our surprise we was still all alone, nobody camping up here and no one a the route, we had the whole mountain for our self!!

The upper glacier was soon crossed with some painful tracking up the last bit to the start of the climb in deep fresh snow.
The bergschrund was easily passed with just a short vertical section and then the next part of hammering up the snow and ice formations could begin!
And since we didn’t have any other people around this passed easy as well and soon just after sunrise we stood at the summit col, just some 30meters away from the summit. Which turned out to be a most airy massage of very interesting climbing on refrozen, slightly overhanging snow.
Sending two happy lads on top with the most stunning views to been seen in the best ever weather to think of!
A dream for filled! 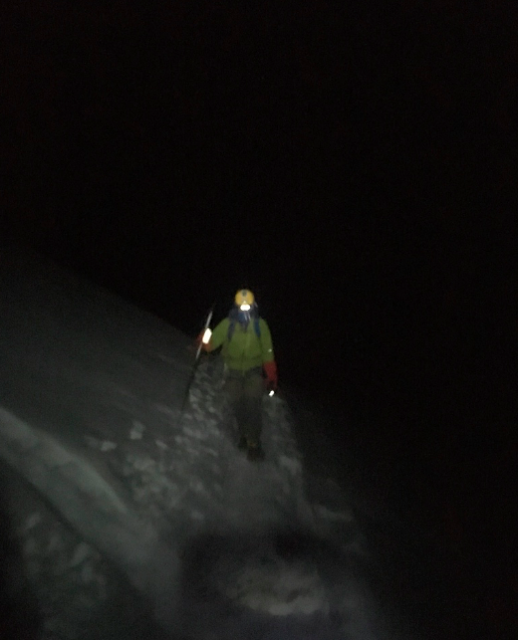 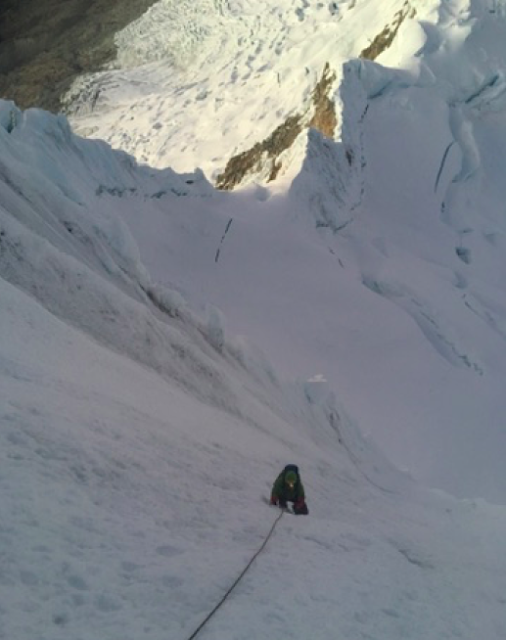 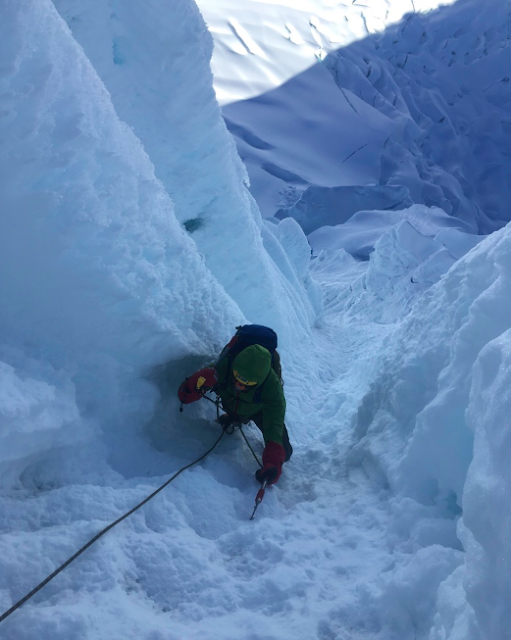 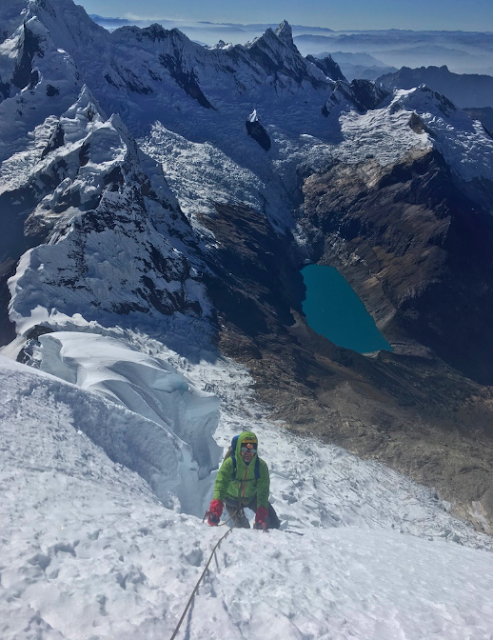 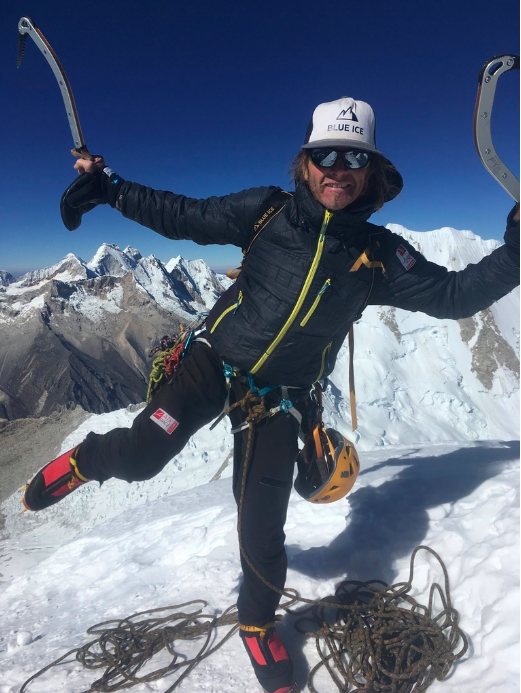 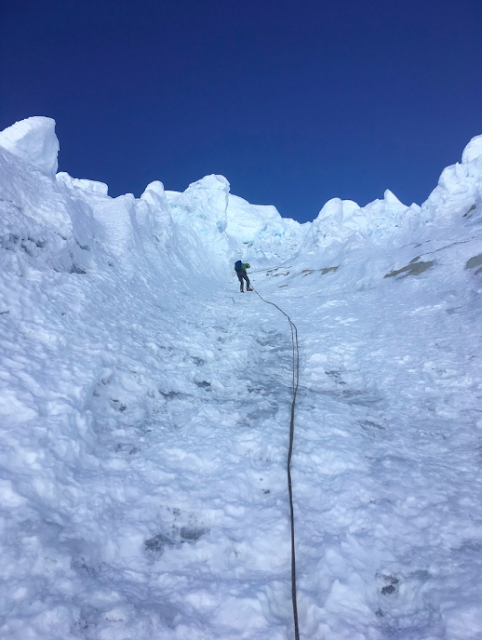 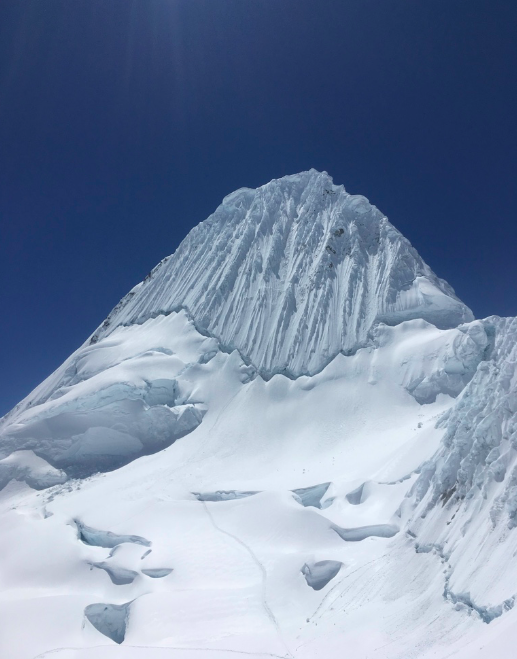 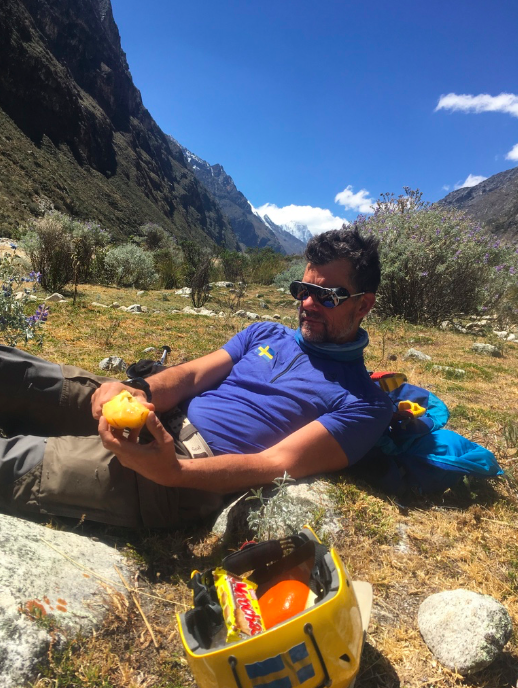 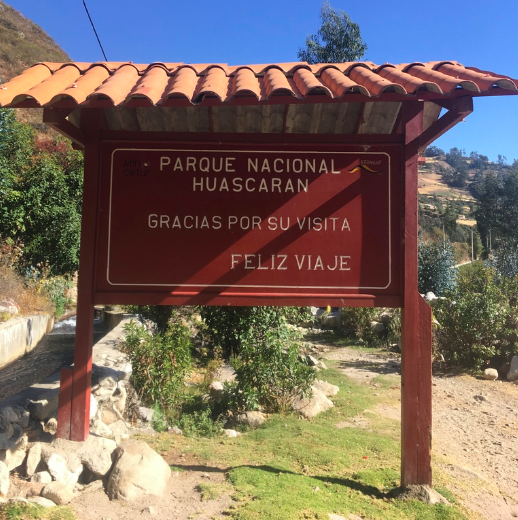 La Chasse aux trésors is an other great Piola route in the aiguille rouge massive.
It travels up some variated climbing cut in two different halves, 6 plus 6 pitches.
This route is to be find on Mont Oreb, 1h15min on the trail up vallon de Bérard from le Buet, Vallorcine.
Find the cairn at 1702m (46,01205N/6,88709E) and continue up right on the well marked path. This route starts quite far right on the falaise with the first bolt some 3-4m up on a broken slab.
The route Diamants de Sang is about 10m higher up to the left. to find Trésors just walk down passing ¨de Sang¨ towards a terasse of blocks

This is a nice area with a couple of interesting routes which are getting more and more popular. But a good escape on warm days or when its to crowded in Chamonix
(Topo at the bottom of the page)
The first part 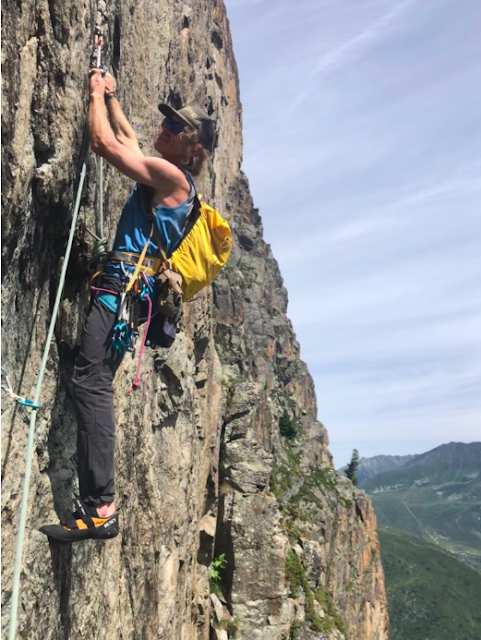 Walk up some steep grassy and rocky section more or less straight up to the base of a small diedre.
More to the left there is an other route with a lunule.
The belay is visible some 30m above

Second Part
L7, 6c - Start up a short slab aiming for a tricky looking diedre, which are protected with 3 bolts
L8, 6b+ - Traverse right over a couloir to a slab. A small roof up to the belay
L9, 6a+ - a nice crack section white looking rock to the left, 45m
L10, 6b+ - an engaging diedre on soli rock with a spectacular traverse out left to a pillar
L11, 6b+ - Continue up the red pillar, short crux at the top section, 45m
If rappelling stop here, if walking down its an other pitch of 5b with 5 bolts 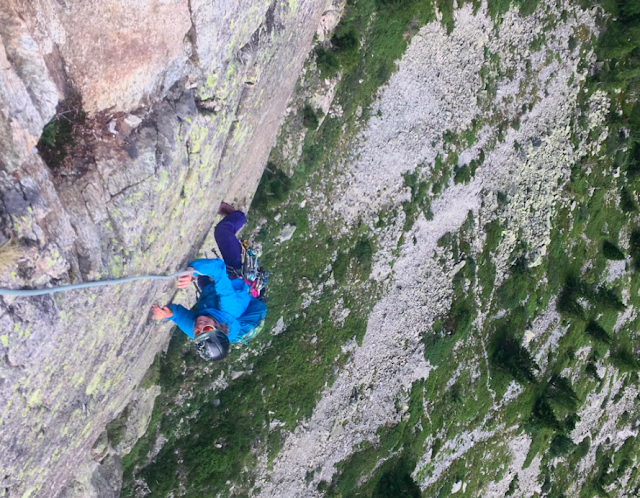 Descent
Makes more or less the same way down, following the same sentier between the two sections, possible to make the rappels in 4 plus 3 rappels, the last is +50m
Take care of left equipment if there are Chamois around! 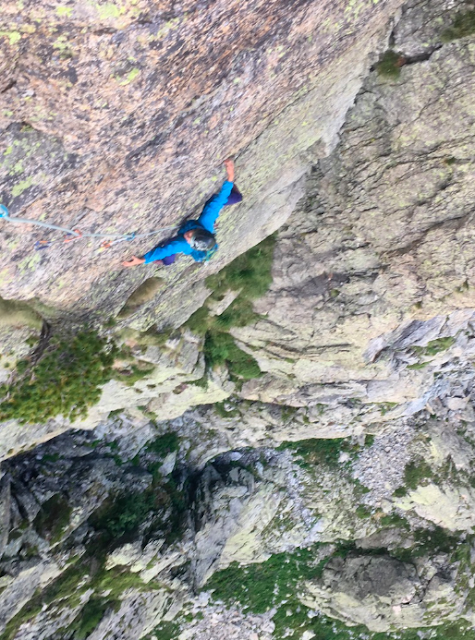 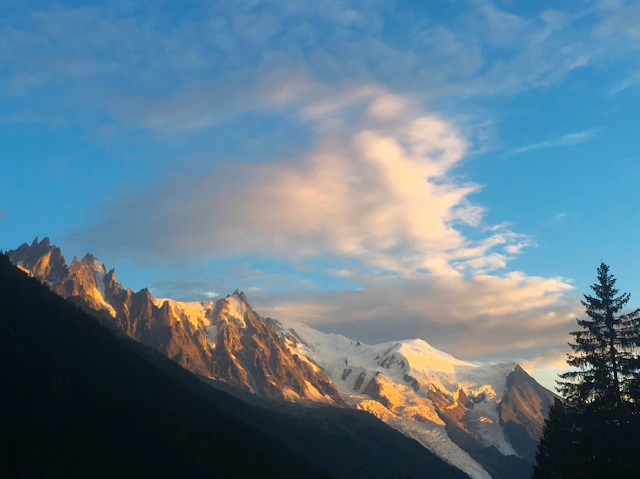 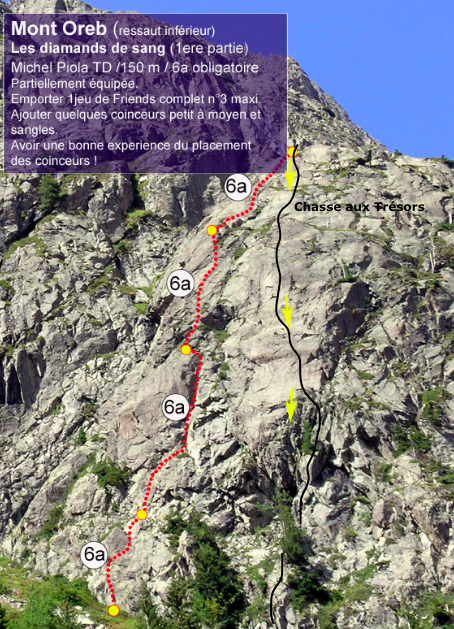