Premier, it sounded like a great idea, to book a late season trip to the sunny Spain. A good place to meet up and enjoy some good food, coffee and limestone. Also a good time to escape a wintery Chamonix and push the ski season a bit forward. The choice fell on Chulilla. A modern limestone dream with a lot of steep climbing on pockets and tufas. It was even promised some crack routes.
Let's go!

A week before going I started to watch the weather forecasts. Didn't look to promising.
Huge flooding in Valencia and heavy rain all over the sector.
And typically, the weather in Cham was super warm, perfect climbing conditions, in the absence of snow.
Good choice!!

After a week end in a chilly Stockholm I felt a little more motivated and after a de-tour via las Palmas I arrived in a late evening at Valencia airport. And yes, it was raining.
We quickly cleared the car hire and headed the 40 min drive west to our goal. Straight forward easy drive. Found our apartment for the stay and got set.

As always a good cup of java lightens up any dark clouds. And this morning even the birds was singing. But they got it stopped rapidly with huge amounts of water, free falling from the sky.
Any thoughts of climbing was to be abandoned. We could always do some sightseeing!?
But as we already know, that isn't our thing really so after a couple of hours we decided to at least ignore the rain and go to have a "look see". Get some fresh air and have a look over the potential. And just bring the equipment just in case.
Of course, it ended up with me high on a most humid 6b, I think you could call it slippery as wet.
But I had seen my line and after rain there is sun, right?!

Chulilla is very easy to get to, if you have a car. A 40min drive from Valencia, which is the closest airport.
The climbing has been developed over the years but it's only the closest sectors that is somewhat polished. As always. Walk a little and there is a huge potential.
And since the walls are facing north/south it's possible to climb late in the season as well as during the warmer months.
The big issue is just the amount of people. Stay away during the bigger holidays!
Finding places to stay is mostly quite easy, camping, Hotel and Airbnb apartments. Or the climbing hostel overlooking the village as well as the climbs. If you can make it trough the gates that is:-)

the climbing
The routes are mostly of a steep character. But on high quality rock, for most of the sectors, as well as good bolts and anchors.
Since the routes is somewhat long a minimum of 70mts rope should be brought. A 80m isn't a bad choice. And some 20QD's. 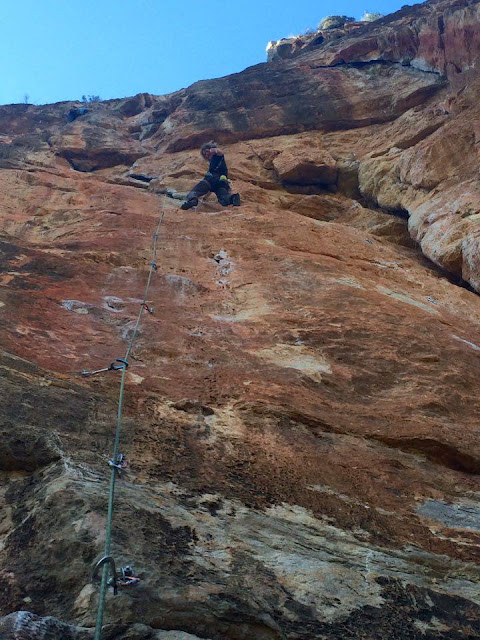 Most of the climbs is to be found down the canyon after the river that runs through the area. And there is climbing from 1min approach to 40min.
There is a couple of ways to get to the area of Oasis and its neighbor walls. Which are the best ones in quality. I recommend everybody to parlay the first parking after the recycle station by the river. Instead of driving around the whole area just to get some 10min shorter walk. It's a good warm up and very scenic.

There is a number of "must does" but most of them are to be found from 6c and up. If that's your maximum it will be a difficult stay.
1/because the number of good routes between 5-6 is low.
2/a lot of people on the the whole time.
3/the south European style is often to occupy the route in some family outdoor day. So if it's one team on it, there can be some 2,3,4 others in the same team. So get a good picture.

And, there is something about Spaniards and their dogs...most of them are nice, the dogs, but there is a little to much layback attitude many times.
This one, well we wasn't quite sure what it was. A Gremlin was the closest we got.
Gradings
Actually we found the routes graded 6b+/6c often harder in someway than a 7a. The sixes often had a super hard crux at some point with the sevens more predictable. And since the bolts on the higher grades often are quite close, don't hesitate to give it a try.

The second day, a bit clear sky's but with all the previous rain accumulated in the soil, it was still like heavy raining in the tufa areas.
But slowly my motivation was coming back to me and I started to enjoy the climbing. And with that started to climb better. Working the days until last sun rays and walking out in the dark. Finishing the days at the local climbers hung out at the parking. Very polite community of climbers and easy to find people to climb with if you show up alone or your partner is taking a rest day.

If you are a true climber, you should not miss out El Diagonal. A two pitch adventure at the Sexy Shop sector. A must do! Take good care of pitch 2, it has many opinions regarding the grade...

An other good line is El Oasis 7a, Odin 6c, Eco Dildo7a+(guess at what sector?) Plan Z 7a, Placebo 6c+, la Seduction 7a and Nazarten 7b, to mentions a couple. As you understand, there is quite many.
Two briljant 7a is Top of the Rock and Zona Facil.

Every time I saw "my line" my mental focus grow bigger. And after being able to send a few harder routes I started to think it could be done.
A long sustained and technical 7c. More then just a sport route, it was actually an obvious line. "Super Zeb"
But on the second last day, after having some serious trouble on a 7a+, I simply gave up the idea.
Which in the end sent me below it anyhow, all other optional routes occupied. So either just stand and wait, it was getting late in the day, or do some climbing.
We're not the kind of waiting.
So rack up and take off. Expecting to slip of at any point it just flows on... 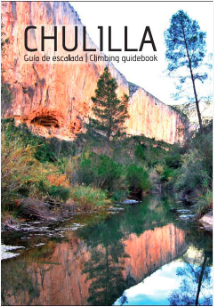 Equipment
Chulilla Rock climbing topo, can be bought at the local climbing Bar
or at the tobacco shop in the town square
Minimum 70mts rope
20QDs
A good rope bag!


Sometimes it looked useful with a clip stick since the first bolt could be quite high. Possible to make one from the bamboo at the river. Or just borrow.

A good link to the local crag is at
http://chulillaclimbing.com 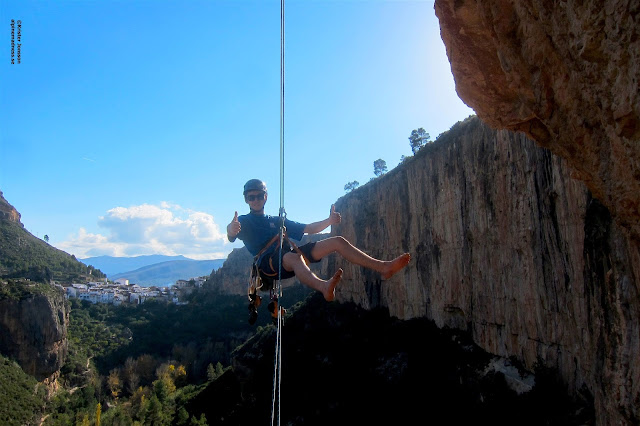 //Bring a big umbrella and you will have a blast!
Upplagd av Krister Jonsson kl. 9:23 PM No comments: