The technique for rope solo climbing is always an interesting issue.

Going just soloing is on the otherhand very easy, just grab the chalkbag or Iceaxes/crampons and pick the route.

Whilst ropesoloing will give you one more try, if you do it right that is.

For me this alternative have given me the plus in a lot more climbing. Finding a partner isn´t always the easiest. Even though it has many positiv things with going climbing with a partner, one more to share the weight of the equipment, someone that answer when talking...well its a lot of good things.

On the otherhand, having the opportunity of feeling comfortable with solo climbing and ropesoloing will give you a lot of things that non soloist never will get close to.
A hard day working on a route or a climb, with the only one to manage is you! Its a lot of satisfaction and expèrience.

The only way that this will work and that You/I will keep on doing this is that it should be easy and feel safe. If not, its easier with out a rope!
The "Solist" from Rock Exotica is by far the best device for this. I have been climbing/using it for something like 10 years. Yes, its the same one! And it might be one of the best things I have bought for climbing... Its been my key to more climbing for sure
Unfortunately Rock Exotica has been sold and taken over by Wren Industries who instead has turned their tools towards weapon industries and today they are more into making guns!

The only issue with the Soloist is that it wont lock the rope if you fall up side down!!
On the other hand that is quite hard to manage that, since it must be used with a chest harness to keep it up. But still it might happen. Happened to me once, so far. But then I was lucky enough that the rope got tangeled so the fall stopped with the rope in a lot of knots.
Otherwise the best way to avoide accidents is to do back up knots on the rope, to be opened during the climb. Something that sounds good on the ground in the sofa, but a little hard to manage on the climb.
Just dealing with opening a knot now and then on a hard climb, could accually be even more dangerous!
I accually feel safer when leading on my soloist then when I´m cleaning the pitch on my Petzl device.
An other issue is what to do with the rope during the lead.
On the ground or in a sac a dos?!
Which  ever its always harder to lead rope soloing then when belayed by a partner. This is since you will have the double weight from the rope, up from the fixation of the stance, up to the device and back down again.
This is one reason that I always secure the rope someway halfway with a prusik in a bolt/nut/cam. To prevent the rope being pulled down.

Rock Exotica made two models for rope solo climbing before they stopped doing these devices.
I have used both of them. And there are advantages with both of them. What I have done lately with my S P is that I place it at the belay just as where the belayer normally stands. Directly attached to the belay. Which makes it easier in a way to do the leading. I just tie in as normal and the rope is feed out through the device. Its just ncececcery to pull gently on the rope since the drum breaks it otherwise. It is also nececcery to pay attention on the rigging so it stays clean for feeding the rope. But climbing this way I have used a lot on multi pitch as well.

An other thing is what to do with the rope on the Belay?!

If its a good ledge there is no trouble, just pay the rope down.
But if its no ledge...the I simply use the back pack, arranging it as a ledge and secure the rope on it. Easy! 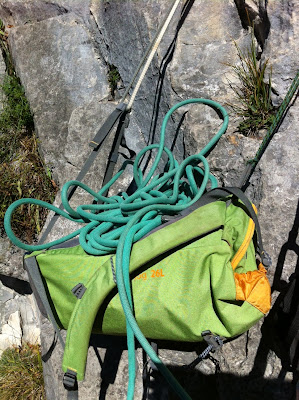 An other good thing with rope soling is that, except giving a good training in rope handling, is that a 5 pitch route will become a 9 pitch minimum. Since every single pitch has to be climbed twice. If you don´t jumar...

//The strenght is all in the mind!