This is one of the most scenic routes on Tour d´Area, with each and every pitch on a demanding level and which takes, at least mine, full concentration.

With a strong friend on a visit in the valley the response was given when he asked me about some routes that we could try out;

- We Should or must try the legendary Aguirre!

The German movie from 1972 with the same name was directed by Werner HERZOG, maybe relative with the famous Maurice HERZOG who led the great French expedition to the Himalayas and Annapurna in 1950?!

Anyway, long story short, this is what happened:

I had just a few weeks before had done an other route, that one on the 4th tower. Struggling to find the right start in an annoying fog, which turned into rain on the last pitches. Therefore I could only laugh when I was once again surrounded by clouds once up at the upper parts of the trail, just below the last bit up to the base of the towers. But, on the fifth tower the numbers of routes are less, and the start of Aguirre is quite obvious, just to the left of the big crack that splits the tower. If, you just could see the tower it self!?

By pure luck, the clouds made us the day and opened up for a moment while we just tried to wait for exactly that moment. A short spell in the fog and we new the way.

By starting from Mont Ferron, opposite Magland, we sawed at least 1h walk, each way. The hike via ref. Doran is good if your climbing on the 1-4th tower, but for the 5th and 6th Ferron is a better alternativ.

Our biggest hazard was just that hunting season was ongoing and the numbers of people getting shoot at and actually shoot dead is not a joke in France. Luckily the hunters had already lay down their first Sanglard of the day when we passed in the morning, and then we was safe away high up on the rock face for the rest of the day. Whit all the shooting going on util we descended in the afternoon/evening 😇

Once up at the base of the tower, the fight was on! 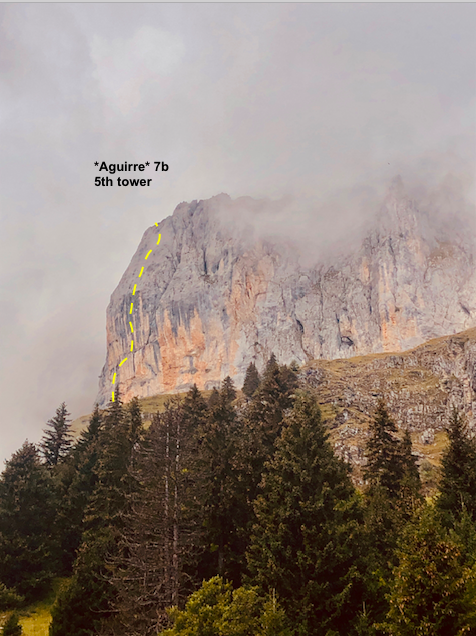 L1 7a Severe departure then beautiful moves over sometimes a drop of water.

L2 7a / b Crosses a little to the right. Easy start then two crossings of bulges which require determination, relay on the right.

L3 7b + Bouldering start on holes, easier section in crack then and magnificent chute. Relay on the left.

L4 6c + Dalleux. Start crossing to the right then a few dancer's steps straight ahead.

L5 7a Very varied. Start in the less popular slab, easier section on scales, technical crossing to the right and groove of 10 m (1 point ...) to exit on a beautiful terrace.

L6 7a A little to the right, start of slab at the end then easier at the end.

Rappels are found by moving upwards and climbers left