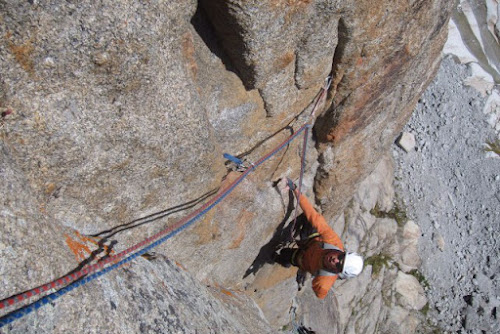 Flammes du Pierre is a little hidden granite spot on the east side of Mer du Glace.

Maybe it is because of the small adventures approach that people doesn't hit this place more. The ladders up on the Charpoua side is a work out by it self.

Or maybe just because it's a little tricky to find out information about the routes and it's quality. Or maybe people is just lazy ?! 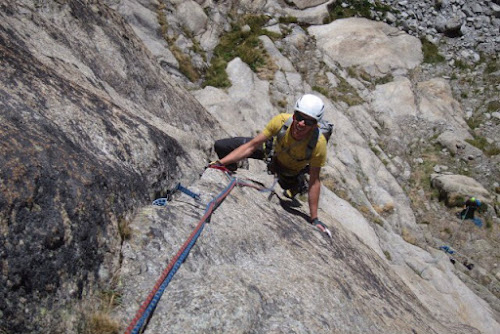 The climbing is on mostly solid granite that is dominated by cracks. Cracks that sometimes is a bit hard to jam the hands and fingers in. It's not a beginner area for most of us. Even though I have meet some potential up comers here that was cruising the rock between the anchors. But often it turns out to be the opposite, struggling climbers with pumpy biceps and fore arms filled with lactic acid. The pitches are in general quite long, around 40-45m. And the in situ gear is kept low. And sometimes the drilled bolts are a bit elderly on 8mm hand drilled pieces.

The routes are all equipped with belays. And most of the anchors have at least one good bolt in it. Just some extra piece of cord can be useful to bring on the climb to be able to change when the in situ is looking a bit used.

"after a couple of tries we finally found a couple of days when we both was off from work at the same time. I had a late evening call with Magnus and it didn't take long until we had decided where to go. We both like cracks and granite and we both like camping. So de Pierre was an easy target.

A quick agreement of equipment and a RDV was set up for the next morning at 08:15 at the Montanvers train station heading for the fist one up at 08:30. A raisonnable time indeed!

As always it's a bit interesting to see if any other teams are heading to the same area. A train filled with aspirants from ENSA school could mean trouble but since most of them was equipped with a set of technical ice tools we thought they must have an other goal for the day.

Once down on " la Merde" or what is left of this shrinking glacier we had 2 other teams heading the same way...it's ok...

As always, the ladders on the opposite side takes its effort, specially with a sac a dos camping size bag on my back. But, as always, I take it as good biceps training.

As we have all day to use we take it a bit slow, no rush to get back to the last train, just a great day out and our goal, l' Elan, is a bit harder and should hold less climbing party's. So we take our time, repacking our gear and slowly approach our goal, at the center of the flames, a beautiful line heading up trough the center of the most obvious pillar on the face.

By some unclear reason it is decided that I should take the first pitch since it is described as a little "dusty"!

And since we are right on with it I might just take the first 3. And then we change and Magnus continues with the next couple of three...well yes, great plan indeed!

Specially since it is like, 6c, 7a/7b, 6c+...hurray! The first meter turns out to quite easy though, but the next 44 is not. But there is frequently good spots for a piece or two, just excellent climbing. Never desperate, just good fun. Something that continues on the second pitch, but by far much harder.

Soon I find my self fighting hard and suddenly some five meters below my last piece, a yellow alien. Magnus had obviously payed most attention on the German belay Neighbor, who holds nice lips and I must say is quite nice. Well, back to business, I pull my self back up and try to focus on my own tiny holds. And this time it works out a bit better.

Feeling heavily psyched I happily announce my willingness to lead the next pitch as well. Which looks like a perfect finger and hand crack from my point of view. Couldn't be more wrong, turns out to be a most difficult to protect in between crack and I am just fighting my way up again. Very happy to leave the sharp end to Magnus for the next pitches to come...

After a splendid evening and comfy night we head up to the wall again next morning. This days goal is the classic "la Reprise". A seven minute approach this time. Which is a reprise to me, but last time we made a variant after the second pitch at today I am looking forward to the 7a finger and hand pitch at the top of the route.

As often I have hard to concentrate when following as a second, not used to climb on "top rope". But it is a couple of nice leading pitches by Magnus. Very good climbing on sometimes bad pro.

Finally, we are up at the test pitch. Since we have divided the pitches between us, it is Magnus lead. But honest as always he declaim him self tired. And as a senior I can glide trough and get this splendid lead in my bucket! " My type of pitch, finger crack and biceps...!

Approx 1 1/2-2h walk down the mer du glace ladders and traversing to the other side up towards Refuge Charpoua. Big white dot at the start on the ladders.

Start at a slab, no visiable in situ but aim for the obvious crack system that goes up towards the roof formation above.

Travers out on the grass ledge. Continue passing the first anchor and go up an other 5m to the right passing a bolt on the way

//The 2 most important days in your life. The day you are born and the day you figure out why

A classic alpine route up towards the summit of Mt Maudit at 4465 mts.

This is a much beautiful climb up sometimes a very narrow ridge line.

The climbing it self is mostly straightforward and do not hold any bigger obstacles or difficult section.

But, there are a few sections on the upper part that can feel a little tricky to overcome and if you like to make it a little bit more interesting the climbing up to the pinnacle of Pointe de l'Androsace adds some 4a climbing (5.5)

From the top of the pinnacle there is an in situ pitons and slings to get down to the brèche. A variant that adds a little more technical input to the ascent.

An other issue is to stay on the ridge as much as possible and to find the right conditions on the route. To much fresh snow makes it at some part very exposed to avalanches and probably very tiresome to plod up.

On the other hand with to little snow and ice it will make the rock very unstable and loose.

Overall it's a much enjoyable climb and if you make it to bivouac de la Fourche, the bivvy hut at the base of the ridge, the evening standard at the balcony is most perfect.

I have enjoyed it's comfort with just a climbing partner as well as with more then 15 people in there, so weekend might be avoided.

The approach can be done from either Ponta Helbronner or Aig. Du Midi.

And just make sure to have the GPS coordinates because one is almost stepping on the roof of the bivvy until it is seen.

"we started the trip from Aig. Midi going up with the lift at 13:00 and made it to la Fourche in 3 hours. The snow was very wet and the snow bridges at some parts most interesting to cross. The part up from Glacier du Giant and cirque Maudit to the col of was easy to pass over the rimaye and perfect snow and sometimes ice up the 150m face.

Once on the ridge it's always a little interesting to see if the bivouac is still there or if it has tumbled down towards Brenva!

But as always, the Italians has done a good job and we had a very scenic sunset and evening just by our selfs. Just some lights from Courmayeur far below.

The next morning we had an easy breakfast after a night with rockfall continuously roaring around us, down the Brenva glacier. The rock fall from the Küffner arête it self was also quite spectacular. Something we soon would find out as it at some parts was needed to climb over some of the loose flakes.

At 06:30 the sun started to hit us on the ridge and we got th most perfect sunrise, lighted by the red color of the Chamonix granite.

Once on top of de l'Androsace, most of the difficulty was overcome. Just some short sections on the last bit that was 1/ a little loose, 2/ some 4a climbing not sure if it was best to keep the crampons on or not. Which we in the end did.

The last bit up to the very summit of mt Maudit can be a killer but luckily we had some old foot steeps to follow and just before 11:00 we could take the last steeps to the summit.

Stove and food for the bivouac

Approach 3h from the lift, a little closer from Helbronner