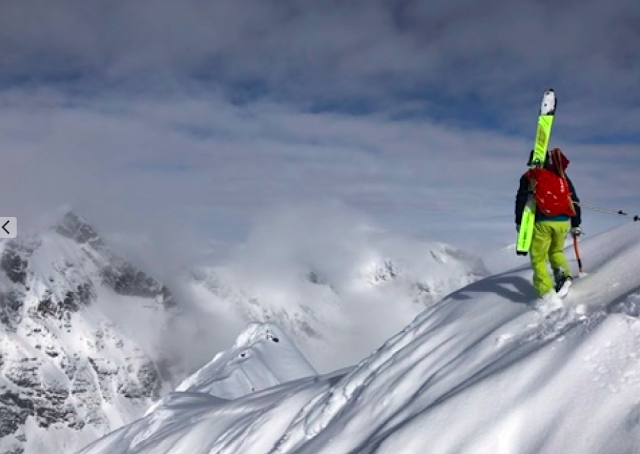 An other winter has about to passed in the Alps. But for the Arctics it is just halfway. In the Swedish Lapland there is still a huge amount of snow. Even though the beginning of the winter was everything then great, snowing wise.

As all over the globe the weather was way to warm and often the precipitation carried rain instead, of more normal, snow.
That combined with heavy winds mostly destroyed the snow pack, making it hard and avalanche prone.
But, things got lucky and just in time for our planned trip up north the weather pattern changed and we got a perfect spell of stable and good conditions for a couple of weeks. Time and snow set to do a couple of new ”Keb Lines”
Our fist mission was to secure and put up an interesting, and new versions, of the yearly Keb Classic. A 2 day ski d´alpinism ski race that runs every year. Nicely arranged with STF Kebnekasie.
Since the beginning of the week still was a bit unstable and snowy, we had a good use of the extra day that was planned to prepare the race.
On arrival we could even get up to the Mountain hut, due to the forced winds!

After 2 days of preparing the course I took the first opportunity to try one of the new lines I had scanned from the year before.
A +600 meter line in the center of Skartaåive, opposite the STF lodge.
It’s easy accessed just crossing the valley and the cause of the exposed terrain I decided to boot up the whole line., which ended with a bit of climbing at the very top of the couloir, before it flattens out up to the summit.
On return, it meant some interesting down climbing, skis on, maybe not the best for the skis but if you use tender steeps, it mostly looks worse then it is. And, many ways it safer with less risk of loosing the skis.
And, it saves a bunch of time.
After the first exposed passages the ride down was in perfect grippy snow with some 10-20 cm pow all way down.

Next day was again windy and fierce. But we desperately wanted to try out a new possible section for the upcoming race. So with a bit of luck we hoped for a clearing round midday and headed out despite the bad visibility and flat light. We could use  snowmobile to the upper part of the glaciers. But driving a snowmobile in flat light isn’t a great experience even if you know the terrain well.
The national météo provider, SMHI, kept their promises and just as in the brochure the clouds started to break up and provided us with a blue sky at 12:00, just as they had predicted. 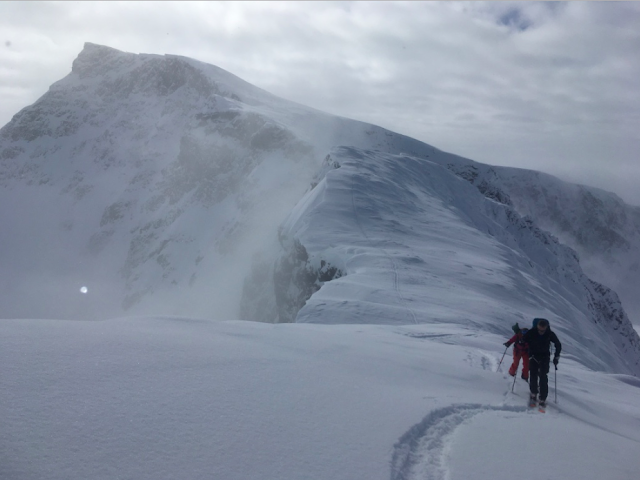 So on our skis and skinning up to the col at Halspasset. Then a short scramble up the pre-fixed ropes up to Kebnepakte. With the goal to traverse the mountain and ski down towards Koupervagge, following the hidden Couloir some 300meters from the summit. A great little adventure with a bit of scrambling.
Starting the descent the wind had blown the top part of snow away, but after just a few turns we got a stunning payback with some super cool powder snow over almost 700 vertical meter.
The retour, up via Svarta Sjon and Kepnepakte Glacier

From the col between the peaks of Kebnekaise there are a few possible lines. One heading northwest, which I think is still un-skied, and two exposed lines going down the steep East face. This year the conditions looked perfect for the most eye catching line going direct down throw a narrow passage, which turned out to contain a bit of ice with a thin snow layer.
And then, via a steep section above a big rock face above a vertical drop, the exit could be done via a narrow ledge/couloir down to the glacier. Unfortunately the snow pack had become a little to warm during the day, so it felt a little scary to ski full on. So I had to take a huge caution and go as light as possible on the middle section.
But, it was a great shortcut to catch up with the participants on the first day on the race. Which after passing me on Kebnekasie I could again be ahead of them down at Bjorlings :-) 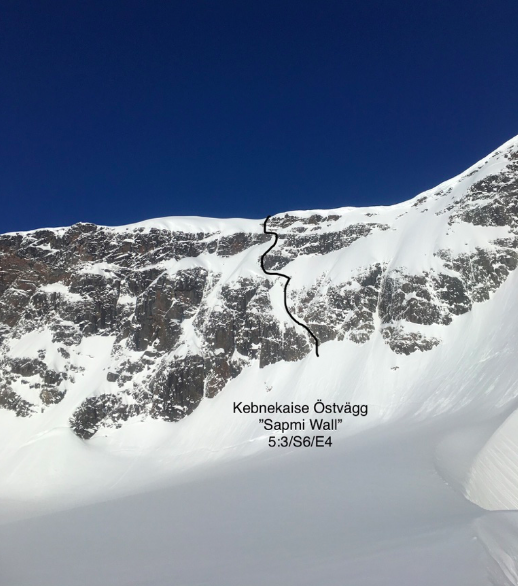 After scanning the map and from former experiences doing the trip on skis between Tarfala and Nallo, I had thought of a possible route linking a bit more interesting route up when going on skis between these huts. Instead of the “normal” Jo-jo leden.
Starting direct up from Tarfala going over Syd Ostra Kaskasetjakka glacier, down to Kaskasevaggi. And then instead of the normal route down to the Abri at Unna Raitas we skined up higher to get the col at Knivkammen and a nice not so steep couloir down more north west to Västra Kniv glacier. Then crossing the lake (1211) and up  to ski the to start with steep line going down to the niche glacier of Raitachokka glacier from point 1934  at Reaiddachokka. That gives a long nice run of almost 900vertical meters ending some 500meters below the Nallo hut.
A great skiing day just a bit longer then the normal variation. But a lot more skiing.
The High Jo-Jo Route 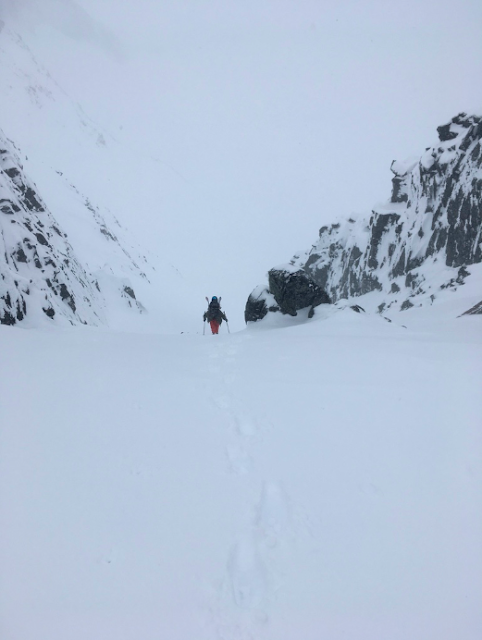 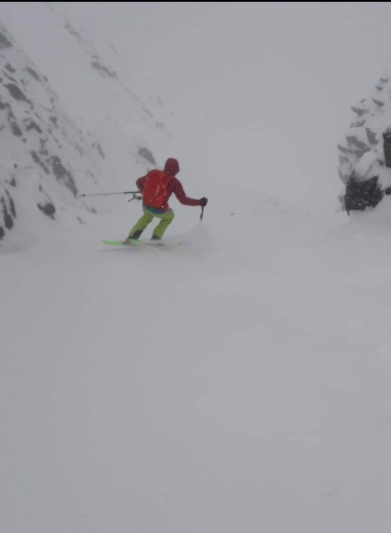 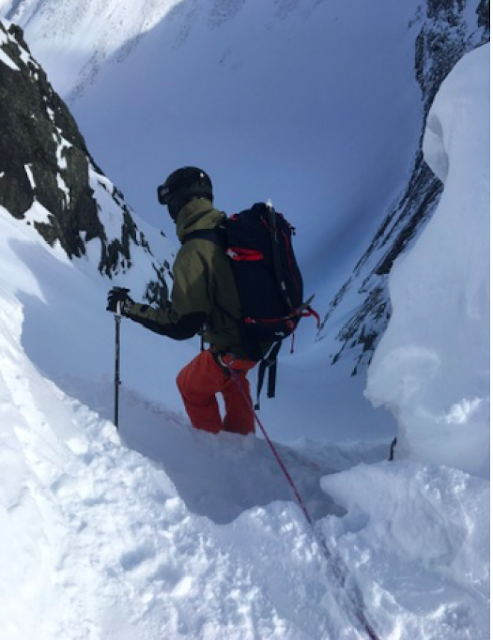 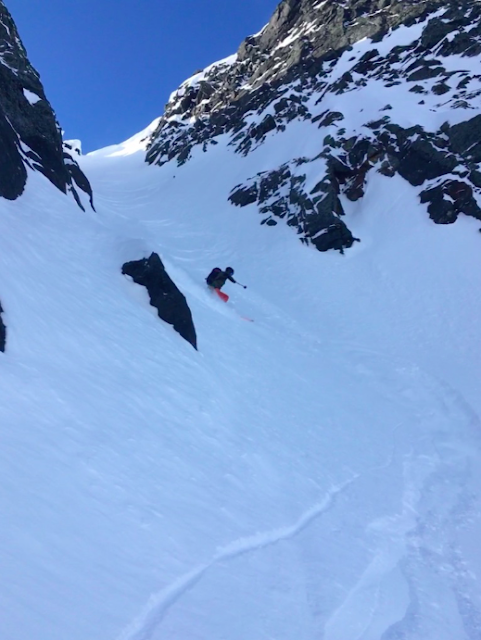 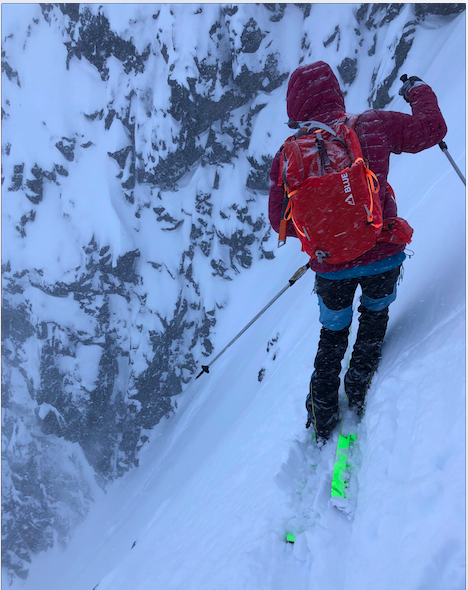 On the way up to Kaskasetjakka via the Syd Ostra Kaskasetjakka glacier, there is an obvious ramp of snow that ends with a vertical drop, down to the glacier. Some years higher then others, just depending on the amount of snow. This year it looked like it was in perfect mode, with some 30-40m rappel. Every year I arrange a Steep Skiing Week Kebnekaise, where I also try to include a new line for us to ski. This year a had the perfect client for this one and the optimal snowpack 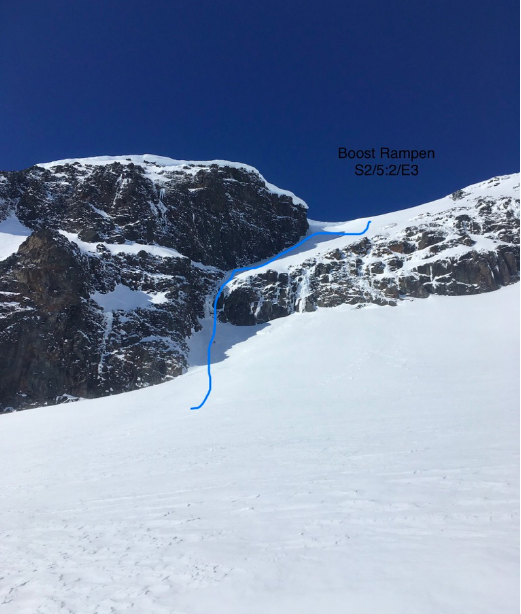 The route starts with a high traverse in under the cornices and then takes a 40 degree face line following the rock side on exposed no-fall terrain. Then you end up on an “Island” and a safe spot before the next section down to the rappel. I had seen that there was more ice then normal, but what is normal these days?, so I had high hopes to make an easy rappel belay from an abalakov.


Down climbing a couple of meters to play it safe I could easily arrange the rappel, 35m down and to the rest of the skiing to the bottom of the S E Kaskasetjakka. Creating Boost Ramp, an other new Keb line.

Since time is never enough, the other things seen has to wait until 2020 and an other Steep Keb Week

//
The rope that joins together two livings as one and if linked to a stranger will soon becoming a friend
Upplagd av Krister Jonsson kl. 6:26 PM No comments: