A 6 pitch vertical fight. Earlier graded 7a+ at the crux pitch but now ”upgraded” to its true reality 7b.
Anyhow its a superb climb that holds a great level over the whole wall. Every singel pitch and move, except for the first couple of meters keeps one focused on the day. The crux pitch is very much obvious the crux, but gets easier once over the ”roof obstacle”. Once in the diedre it easies up a bit. The next 7a pitch is more or less 7a at every single move. A most spectacular traverse on sometimes ok holds.
Chalk up for a finger pain and you will have a splendid day out!

We took one of the last chances on a multi-pitch day. The late december weather has been what nowadays seems to be up to normal, warm and dry.
Leaving le Fayet for the 30min drive, my Ford aint that quick…we still left a little to early so the sun didn’t warm up as I had hoped on. Which would mean that the first pitch would be a bit awkward, the sections with black rock is hard as it is. Now it would mean that the friction would not be that perfect as it could be a couple of hours later. But, is it christmas day, well then so it is! And Magnus had to be back until Monsieur Père Noël arrived.

After the traditional ”cluncing” I got the sharp end to start with. Which handed me the cold start of the day, at least that would mean that I could pass the crux pitch to Magnus…ehh ok.
The first meters goes well, but even though I have kept my down sweater on it is soon cold and I lose the feeling on my fingertips and don’t trust my hands any more. I have to give them a warm up, hands up in my aisselles.
With the nice sticky feeling moving back to my fingertips again I start up and finish the pitch, much closer to the limit than I was hoping on. Its only a 6b!!

Magnus follows easily and soon we are charing belay anchors. And now also with a most shiny december sun on our backs. The rock is still a bit dump though and when Magnus hits the road on Pitch ll, it doesn’t look easy at all, and it shouldn’t. Its a Cham graded 7b so it will be hard!
He pulls it of though and some moments later I am free to follow, punishing my self up and over the most dramatic tiny little holds. Glad I didn’t lead that one today! Good lead Magnus!! 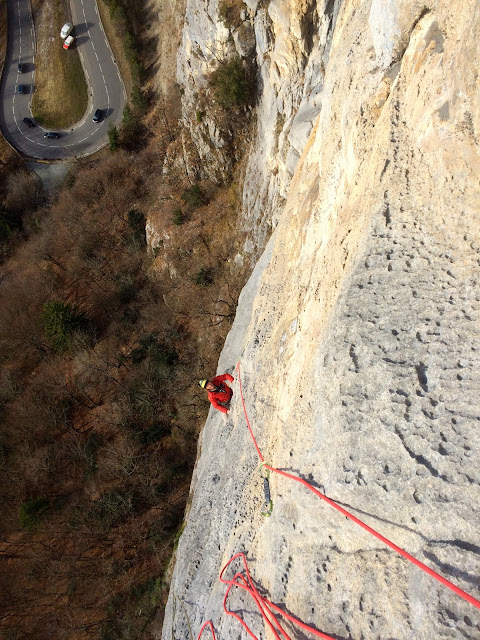 Next one, I feel a little better in mood and mind but it sure looks…well difficult. Where are the foot steps??
After a little searching tentative start I finally find the flow and make it to the next belay.

And some things Santa had was snow...just picked the last good climbing weather

Thanks Magnus for great lead and nice company! 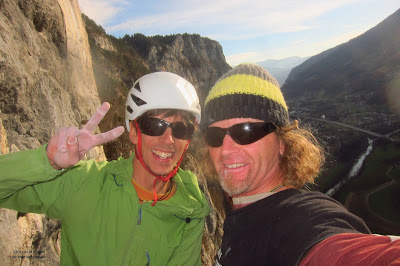 Itinerary
6b L1 + Very good length that heats up well :-)
L2 7b Beautiful relatively short length, the hard pass is rather short
L3 7a + Beautiful, right hand to a common relay with another route
6c + L4 Magnificent but super hard start. Climb a few meters and then traverse right (leave the path that goes straight ahead) and again right to pass an overhang.
L5 6c Beautiful relatively short pitch. Climb a few meters (shared with another route) and then traverse right and finish by crossing the length of the overhangs. Relay on the last ledge. (don’t go up the next bolts)
L6 + 7a Interesting climbing with a not very hard block, the rest is 6c.

// Sometimes looking at yourself is
like a funeral in the mirror*