The last weeks has been amazing for skiing in the Alps. So most of the climbing gear has had to be left in the basement in exchange for skis & skins.
The warm weather at the beginning of the year made January as a disaster for the ice climbing part. Instead it was possible to keep the rocks hoes on for a bit longer so not to bad.
Otherwise has the changing weather made the alpine conditions very good so it should be a good season for some high mountain climbs as soon as the snow settles and the days gets a little longer again.

An other thing has been the high number of avalanche accidents, still in the lack of snow amount. Which just shows that it isn't the amount of snow that makes the risk, it´s the attitude and willingness of risk taking among people.
An other thing is the big contrast in weather, going from very warm to very cold and also that we this year again got a big layer of depth hoar and during the clear cold night it builds up hoar frost due to water vapour that moves up through the snow during cold clear nights. Which when covered with fresh snow forms into a weak layer that easily collapses from pressure, from the feet of a climber or the pressure of a skier.
There has been quite many casualties and accidents, to many. One of the more extreme is one that took part in the ski area of Courmayeur, from the topplift Arp and Dolonne two weeks ago.
A section which a huge amount of people have passed and suddenly it just went.

An other was the other week in Valgrisenche, triggered by an helicopter when it put down a couple of skiers. The weight of the helicopter made the whole mountainside collapse and took a guided group of skiers with it and buried two victims. Which was safely rescued. Two others was quick enough to pull their Avalanche packs and was kept on the surface.

So with this things like this in mind I have had the idea of staying on lower aspects than 30 degrees or really steep runs that doesn't accumulate and build the dangerous layers. 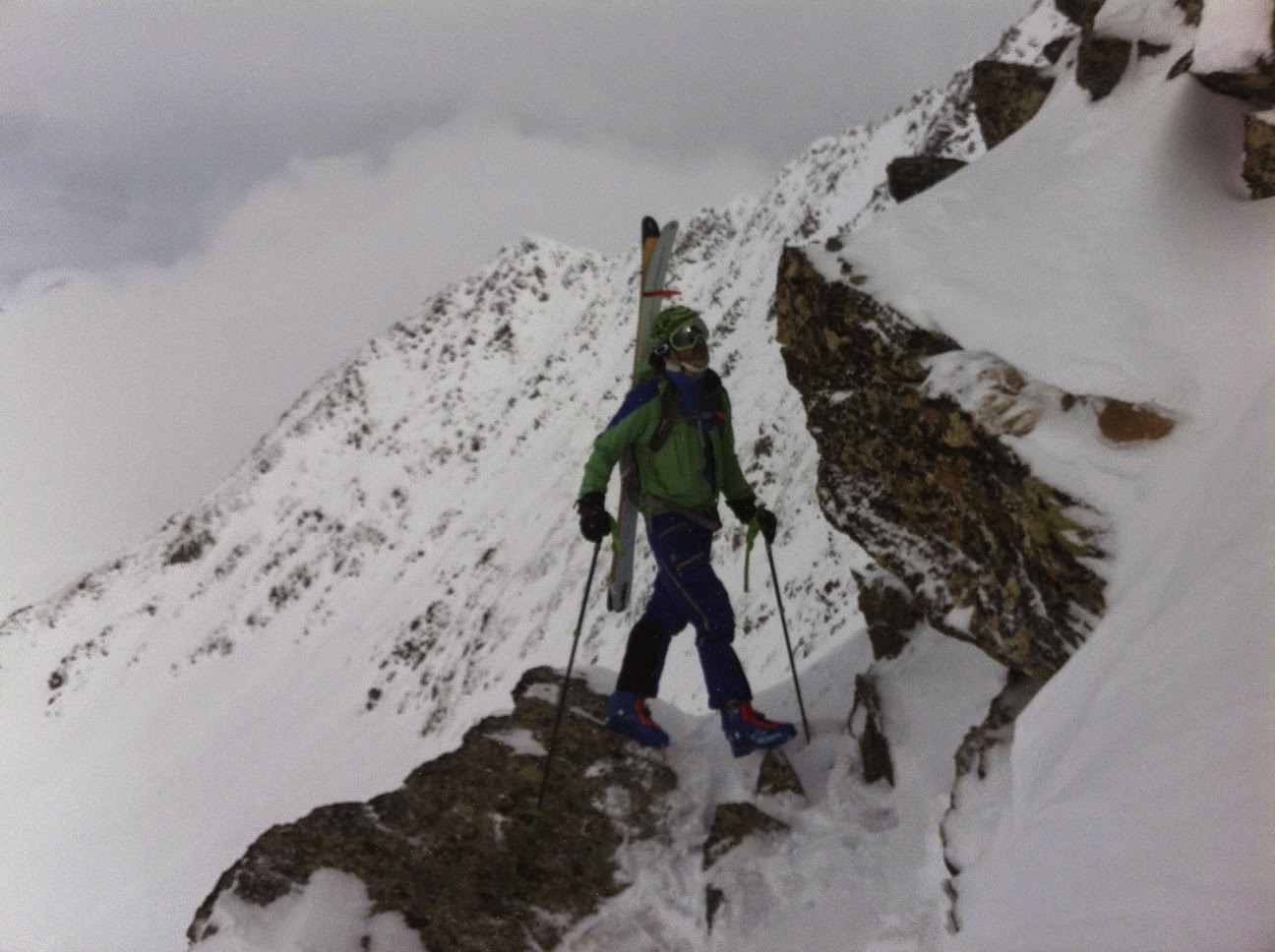 One is Glacier du Bron, col du Autannes
A ski run that can be safely approached via ridges and small faces. And once on the top the descent can be made very safe and possible to avoid all steep sections. Giving it a enjoyable run of over 1600 vertical meters down to the village of Trient.
With no tracks around at all we had the luck of riding the whole thing with no other tracks, just perfect poudreuse. Exept a part of rocks at the bottom when crossing the stream due to the lack of snow cover.
Link to glacier du Bron 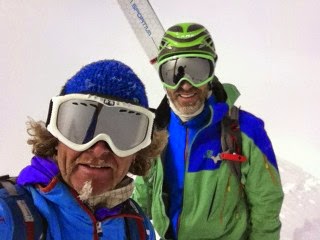 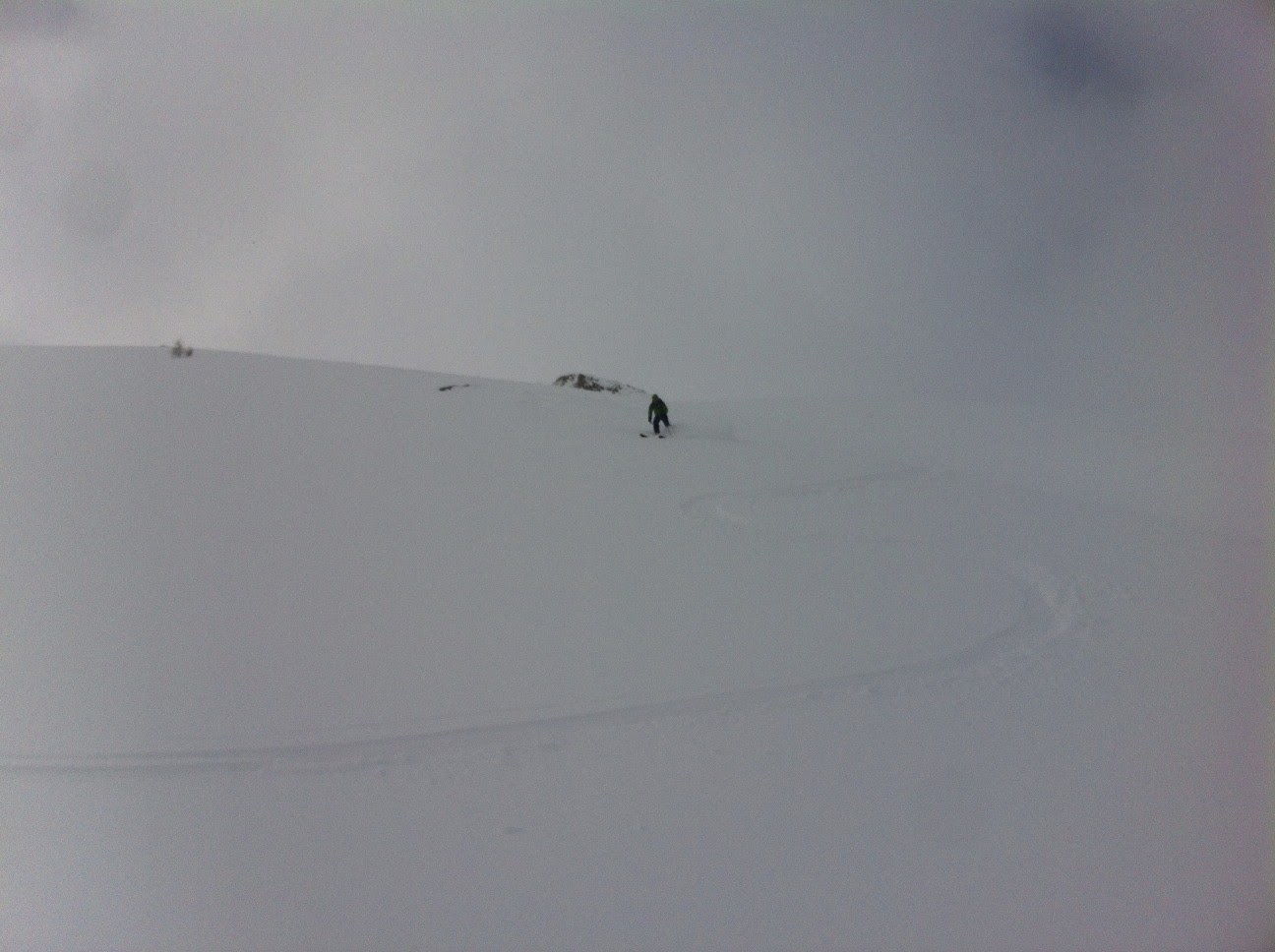 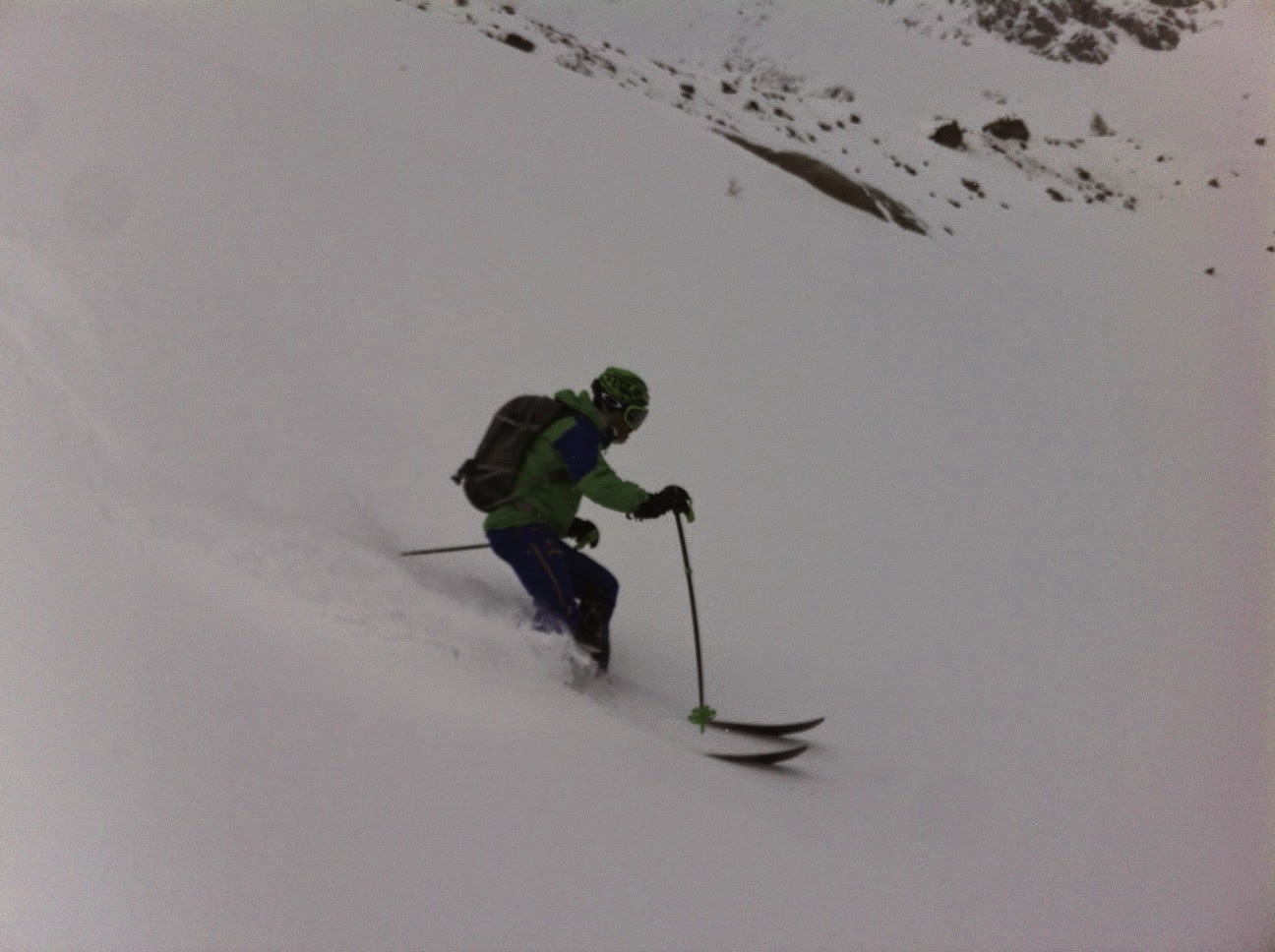 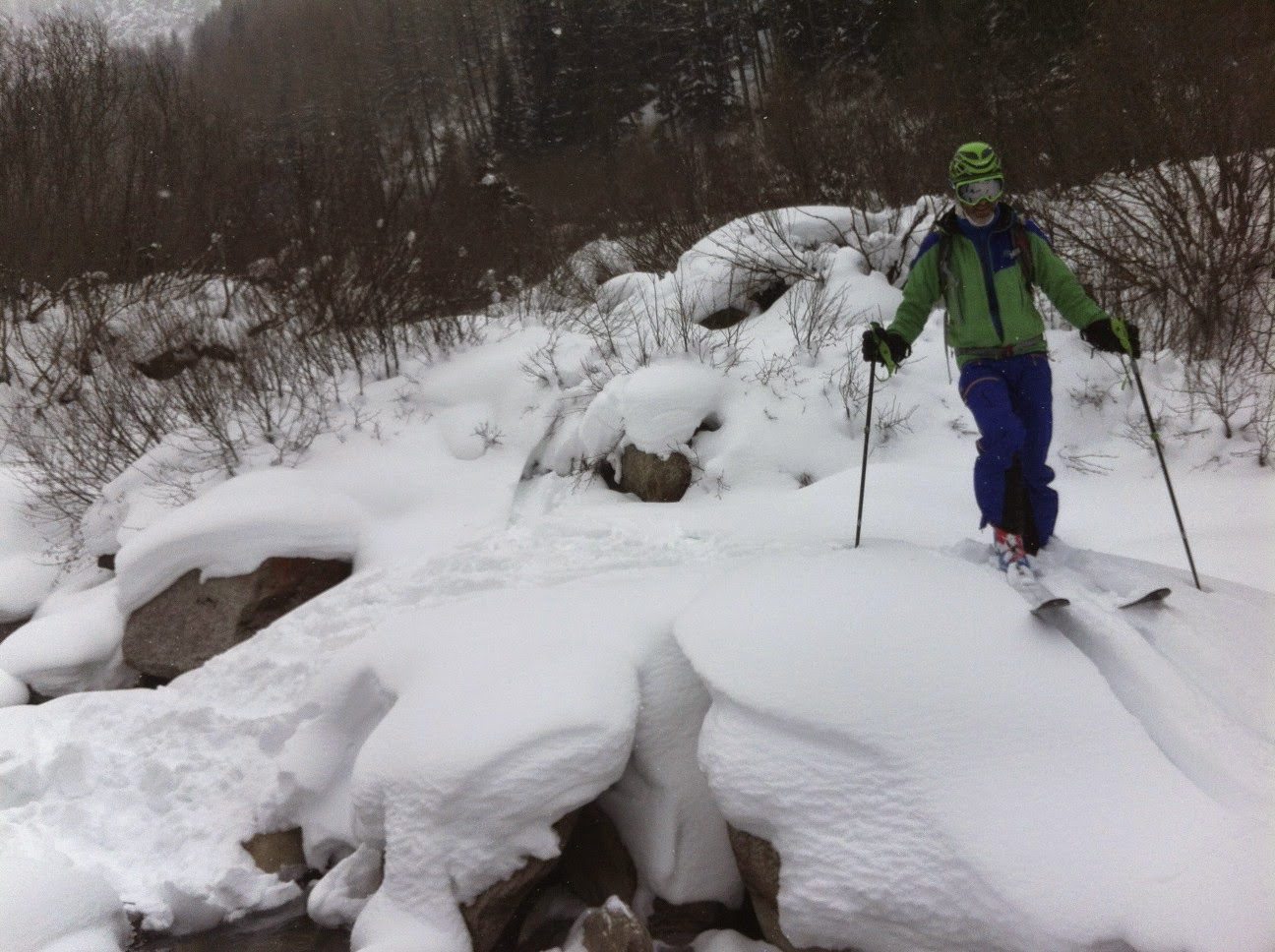 An other fine line is the Couloir from col des Nants on the eastside of Aravis, Pointe d´Areu
Its neighbour, the much bigger gully to the right is an obvious goal to ski but this goes a bit steeper up to 40 degrees and makes a great ski run with no objective dangers. On this day though it was more transformed into "bèton" and not so much enjoyment of skiing, but a nice sunny day out! 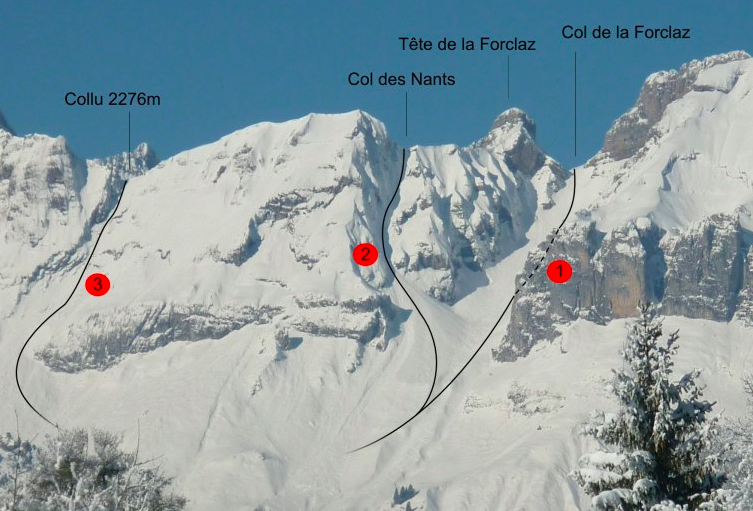 On the way towards la Clusaz via Megeve on top of col des Aravis is the mountains of l´Ètale. 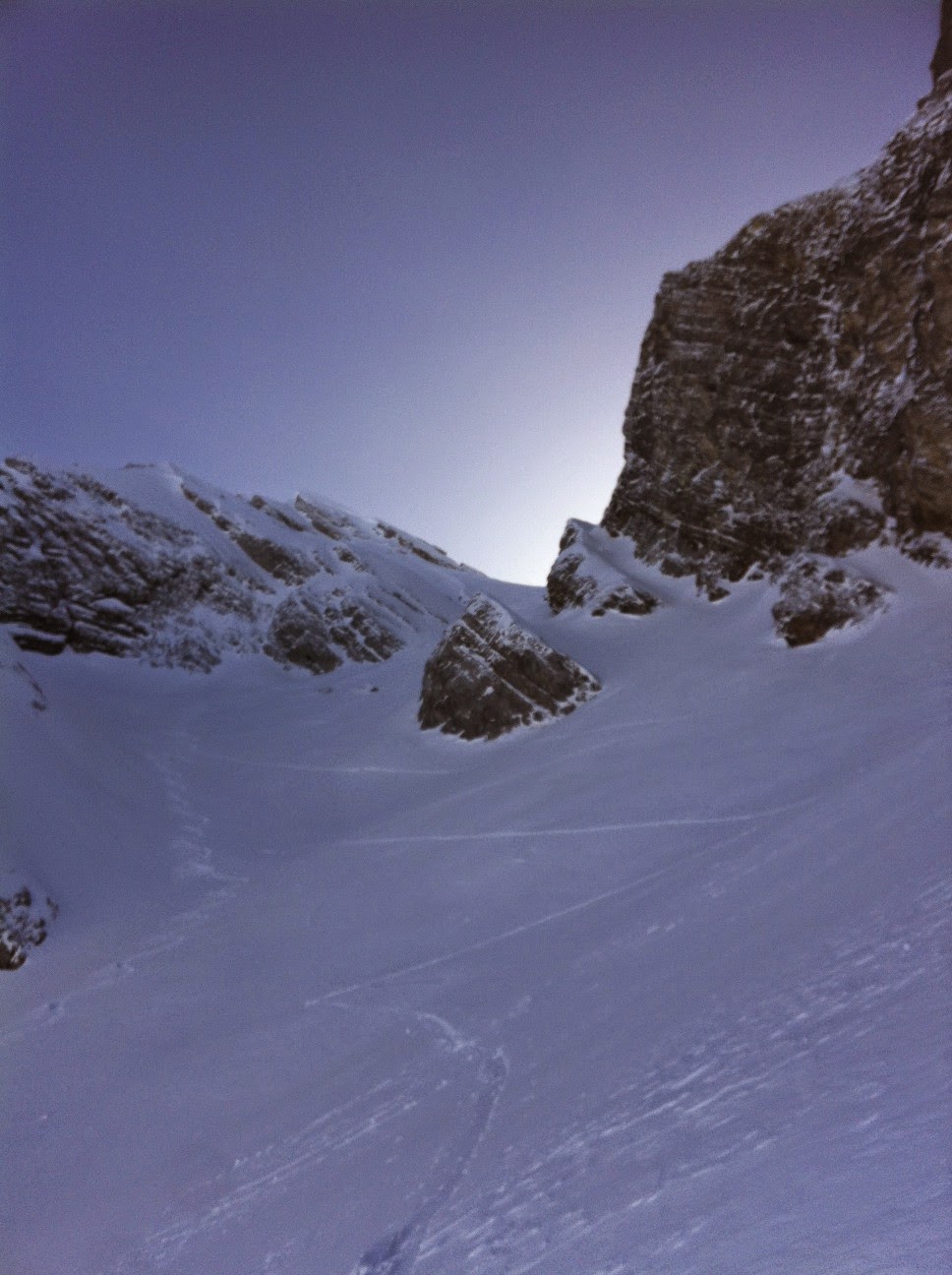 A couple of interesting runs which the center one is the most obvious, "Ètale"
Link to l Ètale

The next goal was to be the beautiful couloir of pointe d´Areu at l´Aravis. On it´s north west side is a narrow line called "James Bond" or Nord Oest Couloir de la pointe d´Areu. Maybe the greatest line in the whole area!? Something that just needed to be skied.

The approach is a work out by it self. Either via Romme sur Cluse or from Burzier, neither nor its about 1000 vertical meters just to get to the base of the couloir...but its worth every bit of it. 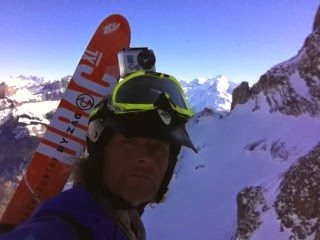 Once at the base it´s steep from the beginning so skis on the pack and axe in the hand. Actually it can be useful with crampons as well...depends on the amount of snow.
For me I had to cover 2 sections of ice and rock but being able to chop out steeps for the unequipped boots it worked out ok. 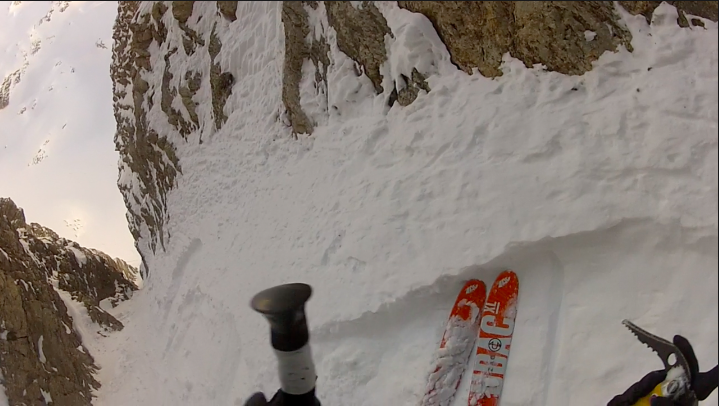 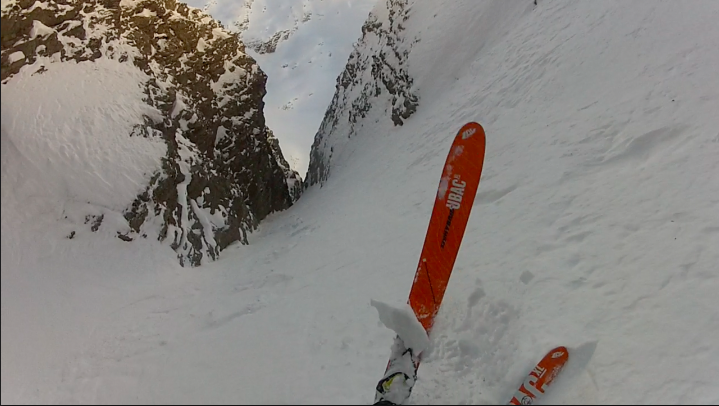 The booting up to the summit is quite interesting and not to bad, of course depending on the quality of the snow. The harder the walk up, the better the skiing is...
At this time it was something in between but stable, about 30min workout.
Finally on the top the views over the massif is stunning as always, but still.
And so the interesting part, the descent! With sections over 45 degrees and you must not fall.

And when doing this "ballade" make your self prepared for a lot of hiking, for most people its a long but beautiful day.
Link to info about d´Areu 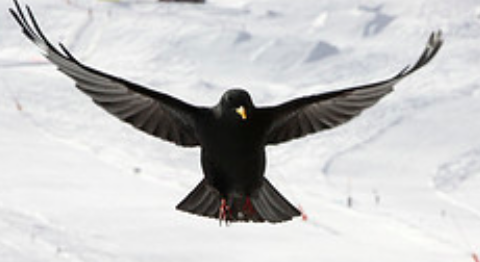 The master of flying, Choucas

A great day of flying between powder days in Val d´Annivers...

And yes, there was some powder as well! 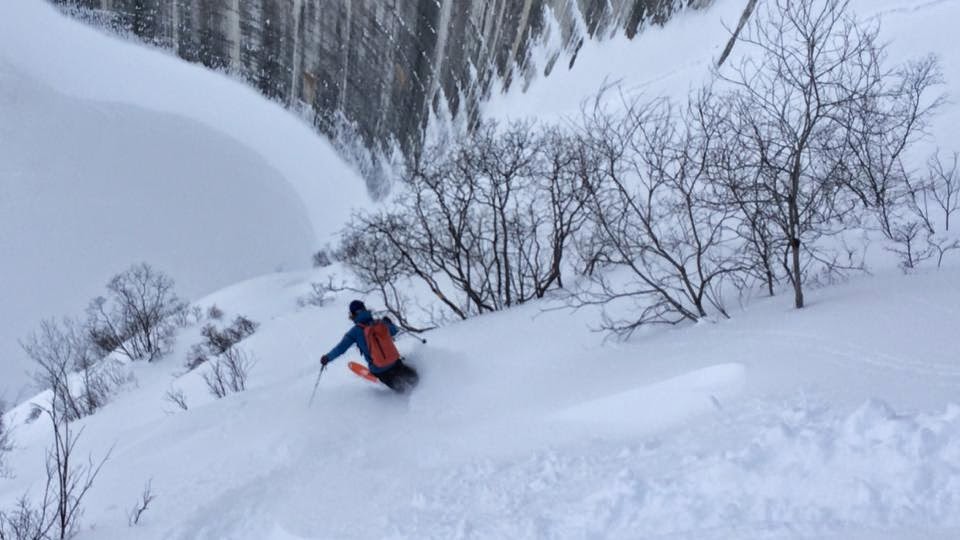 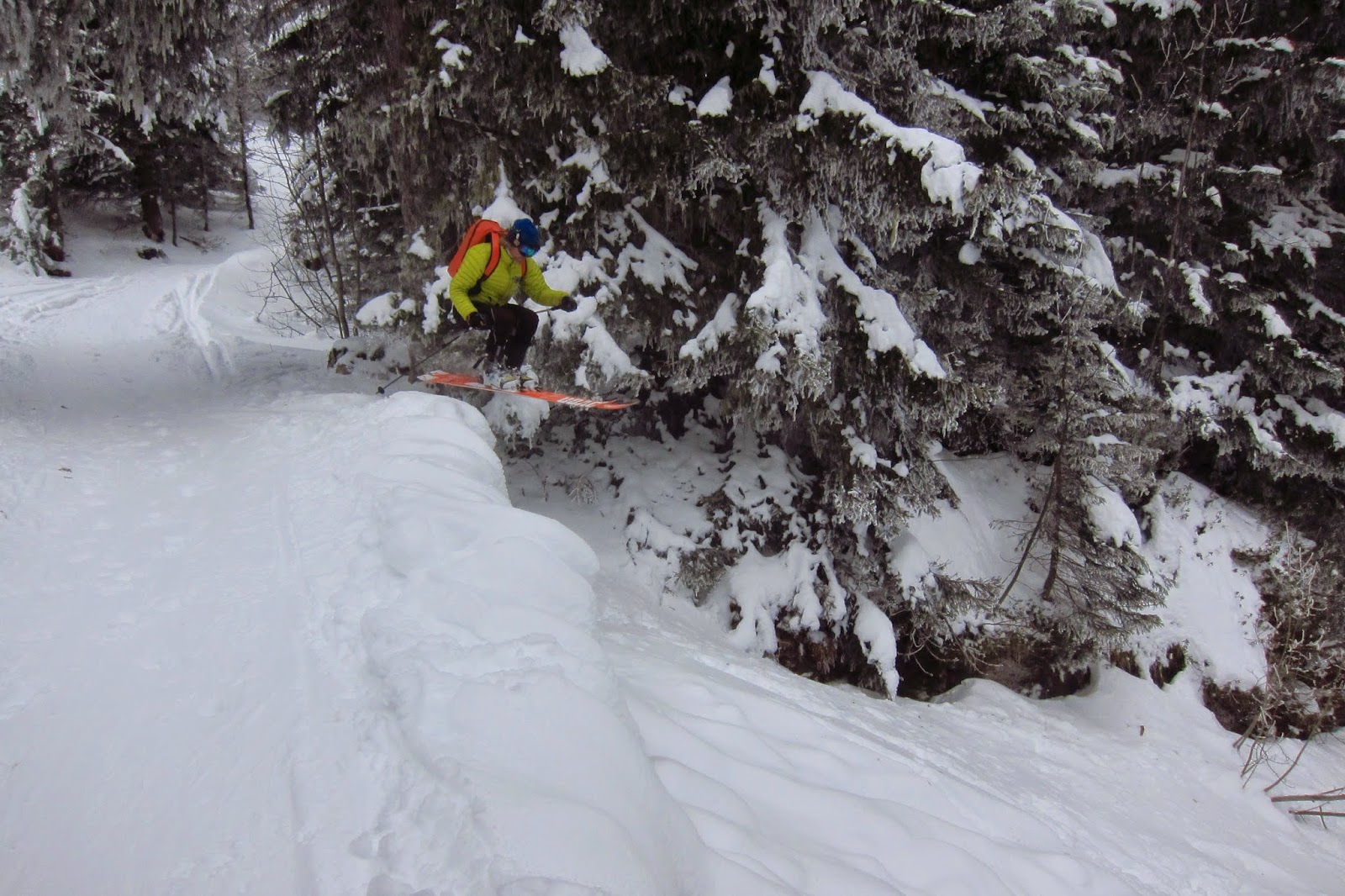 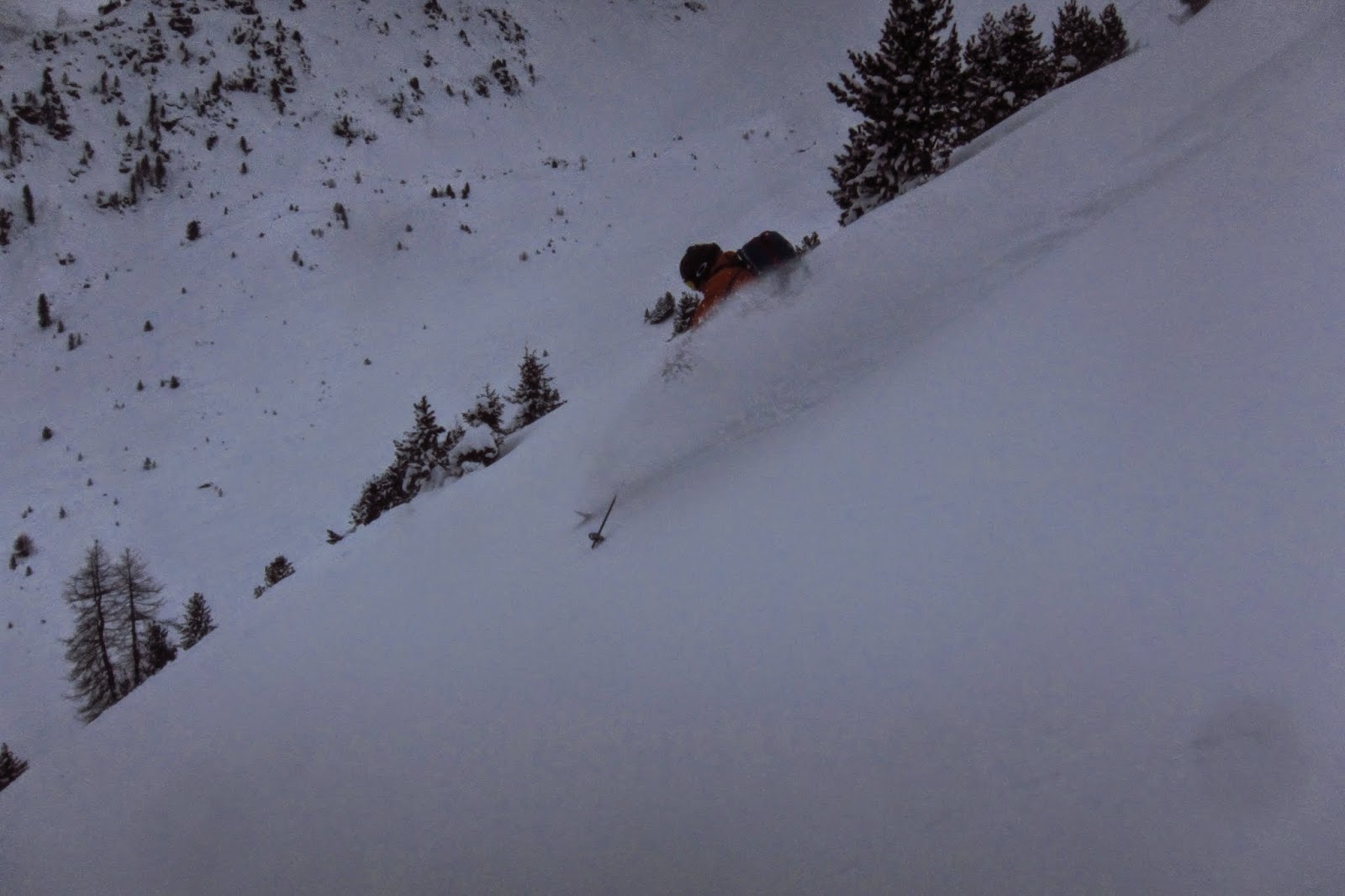 The last week has produced some great amounts of the long wanted white stuff. 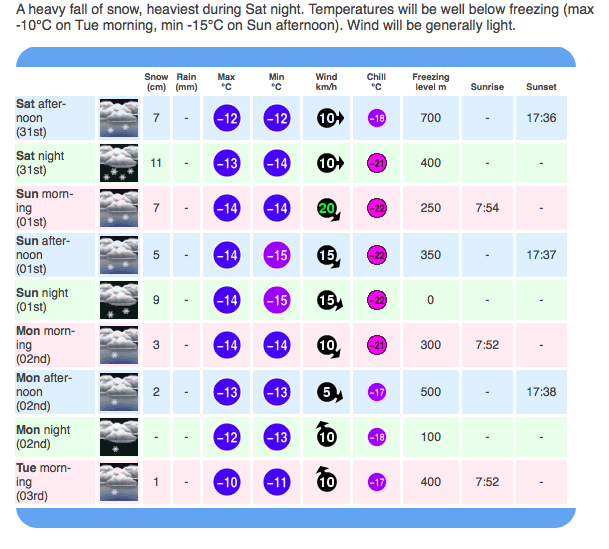 As always with heavy amounts of snow, specially after a long dry time, there has been a number of avalanche accidents as well. Some that has involved casualties.Despite a 4 on the avalanche scale people just go off as noting has happened and many times there is just pure luck that the number of victims isn't bigger.In many cases the false security of a couple of old, or fresh tracks makes people believe that everything is a go! 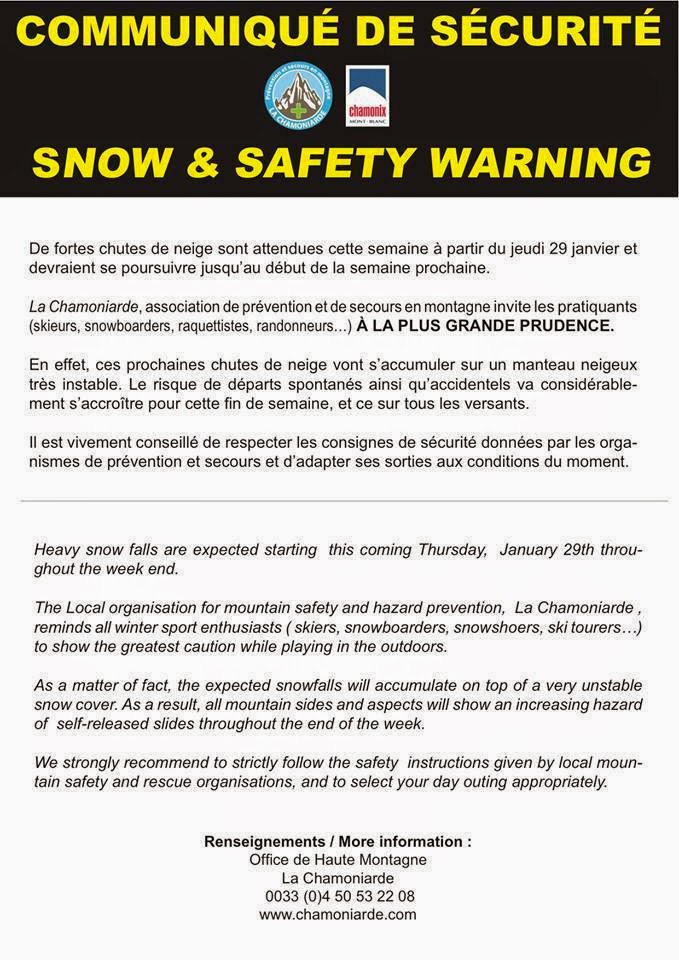 "Everyone can be a hero one day

and a mother fucker the next” Gary Hemming