Happy new Year to all of you passionated mountaineers !

This year has given a lot of good skiing, rock tours and ice/mixed up things
I am glad for all of you that are following mountain passion blog and hope you continue doing so. For inspiration, tips and pleasure 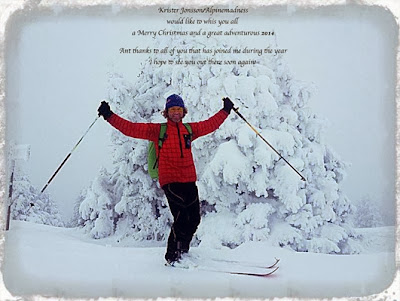 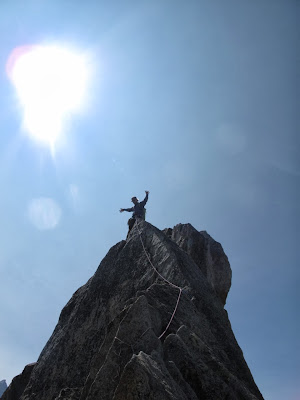 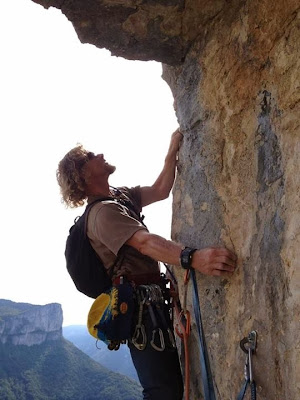 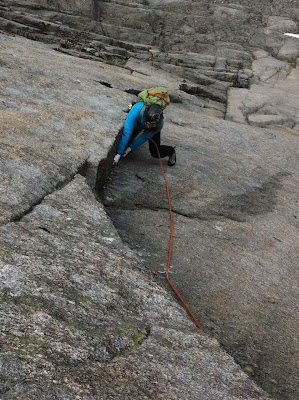 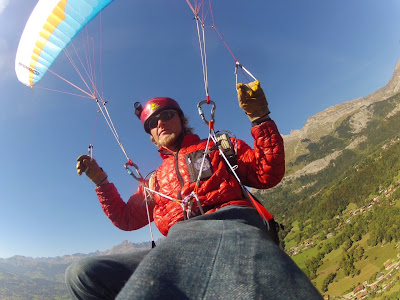 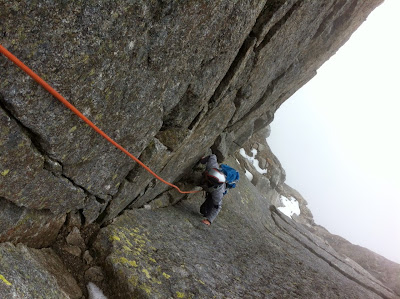 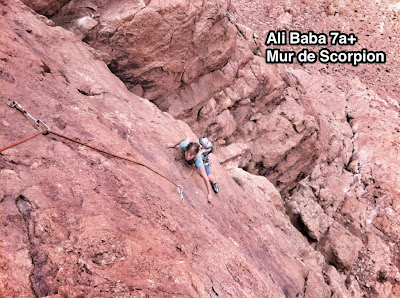 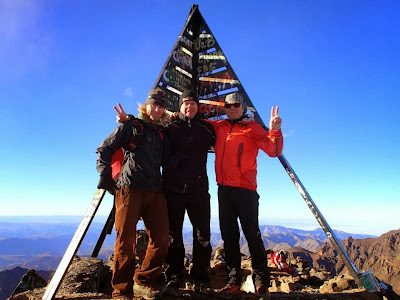 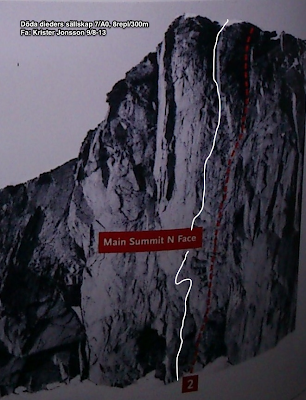 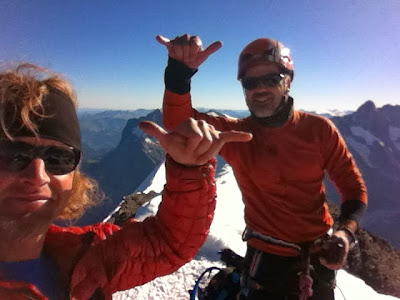 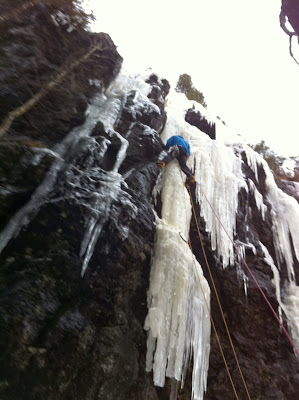 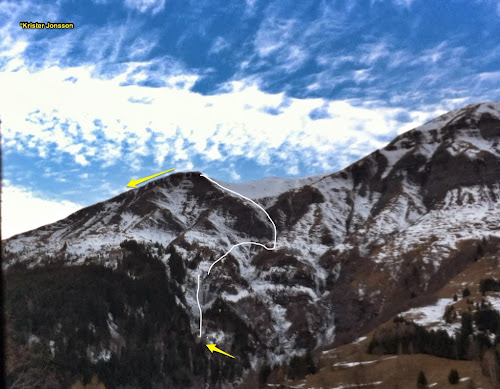 And togheter with the low amount of snow the approaches as well as the danger of getting avalanched is low as well. There fore many exposed ice routes is quite safe to approach and climb at the moment.

One of these is the ones up in the gorges above les Contamines, Nant Juaune, Fandraz and le Tremplin. All which a in good conditions at the moment.

After a ski tour up to mont Joly I just hooked on the plan to pack my light weight Ozone wing and go for a speed ascent of Fandraz. It just looked like a perfect goal and would bring a nice flight as well in my opinion at least...

Early morning and a look at "paragliding map" gave the answer that the wind was to strong and from the wrong direction. Bit nothing worse than I could do with an other coffee and perform a bit of "office work"

An hour later the sun was up there shining but the winds kept on it forces as well. But as the patience got lower I still just decided to give it a go. The extra weight of the glider, 1.2kilograms, is just nothing to fuzz about and it would still be a nice day outside 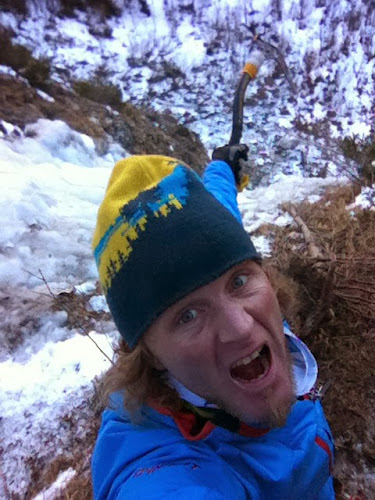 The approach turns out to be a pure satisfaction, 20min of walking and I'm at the base of the gorge and a couple of 100mts of canyoning up the gorge brings me to the foot of the ice.

Except for a couple of chamois I'm just by my self today, just foot prints from the ice team I saw wo days ago and nothing else

The climbing is easy on soft ice, with the only hazard of quite big stones that comes tumbling down the colouir now and then. Mostly then actually.

20 min approach and 1.40min climbing takes me to the summit slopes of T Orient and Mont Joly, with almost no wind...time for a bit of relaxing and dejuner in the sun. Finishing the water bottle and a pice of baguette

Then part 2 starts with a comfy descent with my Miniwing back down to the parking, almost landing at the back of my Ford 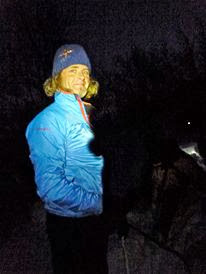 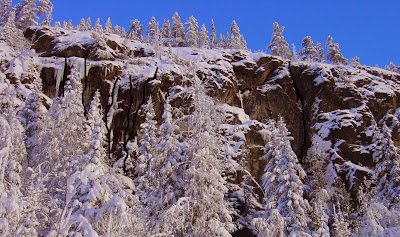 After a couple of days in Abisko, actually a loong weekend, with some decent ice climbing in this magic place up in the very north of Sweden. 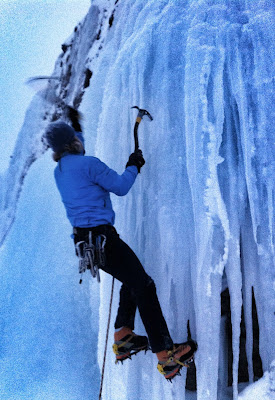 This place which is one of the driest areas in Sweden, neighbor with Björkliden and Riskgränsen. Which is one of the places that gets most precipitation during the year. Climbing here is so much than just swinging the ice axes.
The cold arctic climate, the short days and the northern lights, it's just amazing! 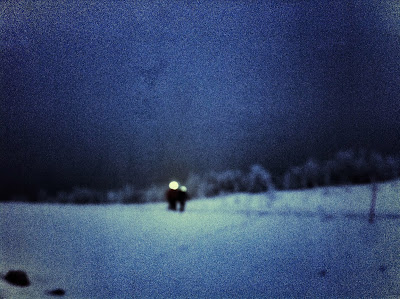 But, the weekend came to an end and the trip continued south to Östersund. A trip that came to a stop in Offerdal, Rise. About 50km west of Östersund on the we towards Åre. Which is one of the bigger ski resorts in Suede. 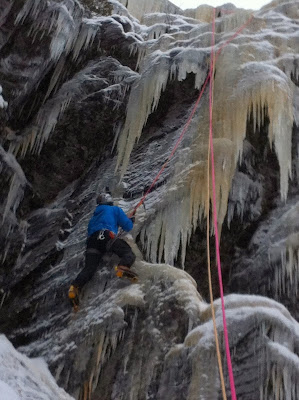 One of many interesting mixed routes in Offerdal

This area has two sectors with about 2km in distance between, so its different parking places. A car is required, just to get here. The routes here involves every kind of climbing on ice, rock and mixed. With rope lengths up to 50m.
The main ice is very obvious from the road and the approach is quick and straight forward. Just make sure that you park your car at the right place, the local farmer normally cleans a quite big area for parking away from his garage 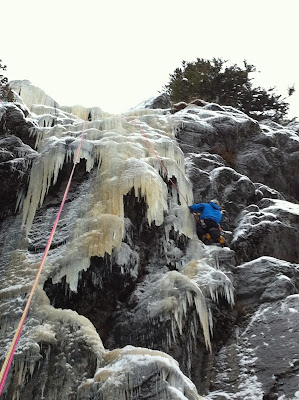 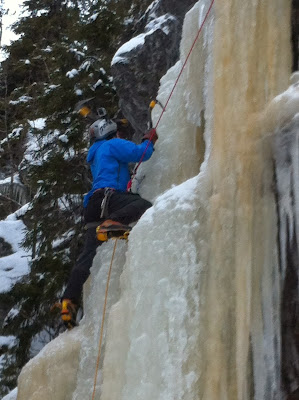 I would say that this is one of the best areas in Suede taking in mind the big number of routes which is concentrated so close to each other, with it's good quality and various grades, from WI 3 to M8. Just take care of some of the mixed routes since they sometimes are very demanding and falling is sometimes not an option. Most of them also need extra pro and only a few a fully bolted. But on the other hand so can many of them be top roped first, before the sharp lead! 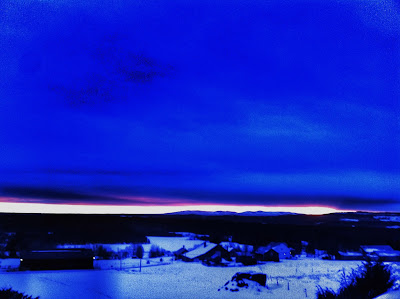 My favorite climbs are the ice formations out on the left side of the crag, thin ice witch all of them has some mixed starts, and often pure rock
An other great route is Svart profetsia - M8 and "Pelarkrisen" and the hard starting "Campai" M7And, when it is formed "Carpe Diam" M6+, is just a great climb at almost a full 50m pitch, long and demanding on own pro! 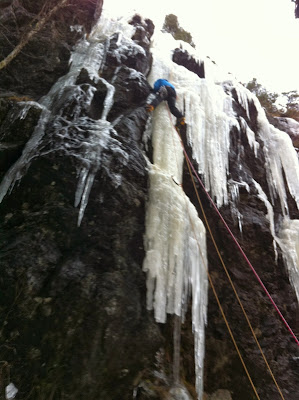 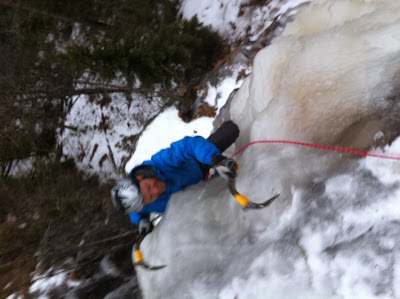 To get hereFrom Östersund is about 45 km to the village Tulleråsen located northwest of Krokom. In Tulleråsen turn left towards Änge. After a mile, turn up right at a sign for "Rise". After the sharp right curve on the
hill, a barn on the right side

You need
2x50m rope
4-6 ice scruws, a full rack of nuts and camalots as well as some small Aliens and pitons
8-10 QD´s 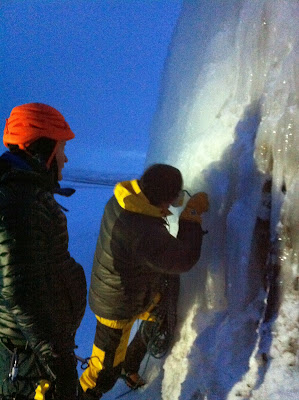 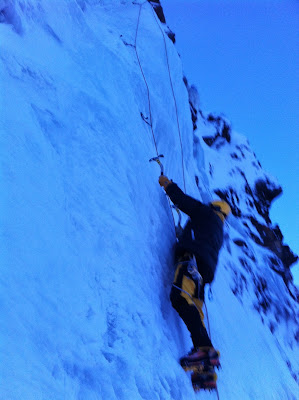 A great day speed riding the slopes of mont Joly and les Contamines
With the Bercut 15 from AEROS, a perfect combination of speed and riding


/fly what you climb!