If you want to get away from the crowds the small valley of Champorcher is a nice hide out.
A little quiet village well hidden up on the east flank of Gran Paradiso, Aosta valley.
On Bec de Raté there is a couple of interesting climbs and ”Via dei Diedri” 6a is probably the most known route. A 9pitch climb with mostly grade 4 and 5 and a couple of 6a sections. This is a bit older route so the bolts isn’t anything close to up to date!

Its Neighbor ”Via dei Diamante” is of a newer standard on mostly good bolts and belays.
It starts on 2050m and tops out on 2417mts with some crux pitches up to max 6b. The start is actually the hardest part! Mostly short pitches except one middle pitch which is close to 50m. So for retreat or rappelling the route it is necessary with 2x50m ropes. But easiest to walk of from the summit back down to the parking. Just look watch out for the cows!!
The general information about this area and routes is quite hard to find, mostly on Italien, but when you have found the sign with the route name, your at the right spot, easy as that. 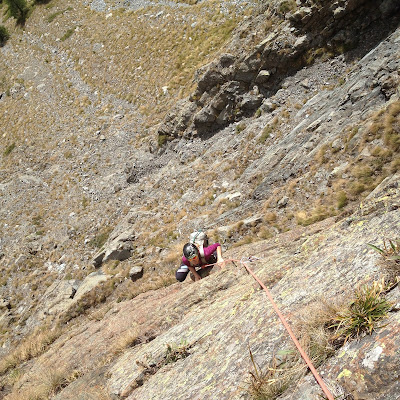 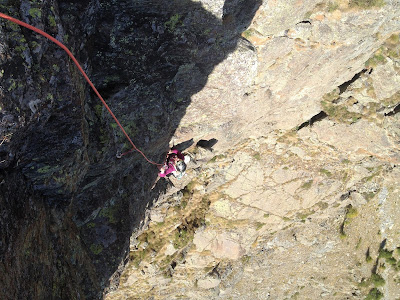 We finally had a couple of days of at the same time but due to cold and snowy days before our main goal had to be left untouched this time. Instead we took the opportunity to cross the tunnel over to the sunny val d´Aosta and the area around Arnad and Donnas for a bit of enjoyable sporting, clipping bolts and drinking good Italian Espresso.


But since we both are more into longer routes some investigation well performed by Anna we found a good alternativ which could be of interest.
And as always Ford was interested as well to head into unknown areas so off we went.
And even though the road keep getting worse we arrived at the parking after some hours driving up the valley of Champorcher and Dondena village. 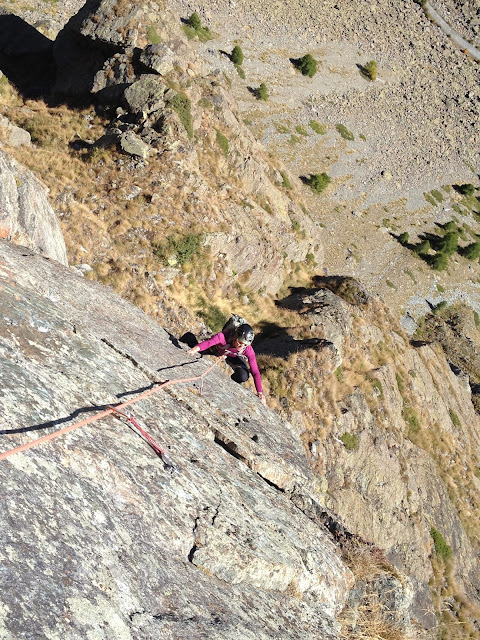 Once a the base of the cliff there is a bit of "scrambling” but after sorting out the differens between herbes and arbres things went easier.
With the ground info that it should start just next and rightwards of an obvious diedré it came very clear when we also spotted the painted little rock with the text ”Diamante”.

The rack for this route is very easy, 10QD´s. And once the first obstacle is overcome the rest runs mostly easy.

Approach
Drive up val d´Champorcher from Hône via route SR2 and drive trough the village of Dondenaz.
Follow the winding road that goes into a dirt road. From the road there is a sign for Lac Raty (9A). Follow that until a big open field which is crossed at the lower part and look for a faint footpath that heads to the bace of the rock face.
Follow the path under the face leftwards and on some small ledges with herbs, the route starts just before the small diedre formation, sign ”Diamante". 20min walk

Descent
Walk of back towards the parking, follow the cairns. Approx 1h

Eperon Süd on Aig. du Midi has a couple or actually a number of good routes, bolted as well as self protected on own pro.
The most famous one is once again the Rebuffat route but its neighbor to its left is just as nice and involves a couple of good pitches up solid rock. Well ok, the first couple of strenuous meters might be a bit crusty.

The second pitch is a most beautiful crack system, which sadly is bolted!, but if ignored has a semi long section with nice jamming up a hand and fist crack. Easily protected, even with out clipping the bolts.
Pitch three is the most variated pitch and has a close to 40m climb up solid Chamonix granite with some interesting moves but always well protected on pitons and own pro.

The last section is divided in two short pitches but is easiest to organize in one long pitch, ending on the lower section of the classic Arete des Cosmiques. 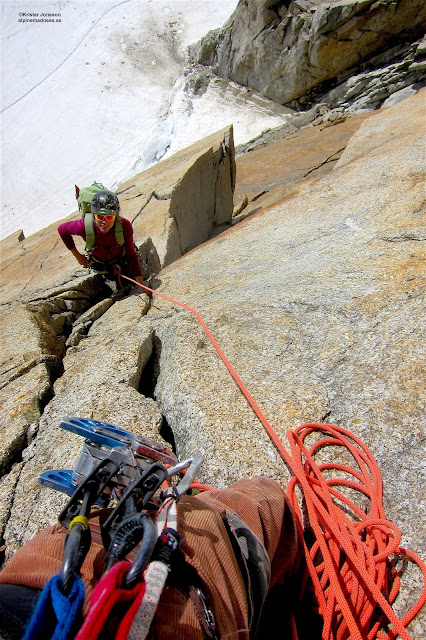 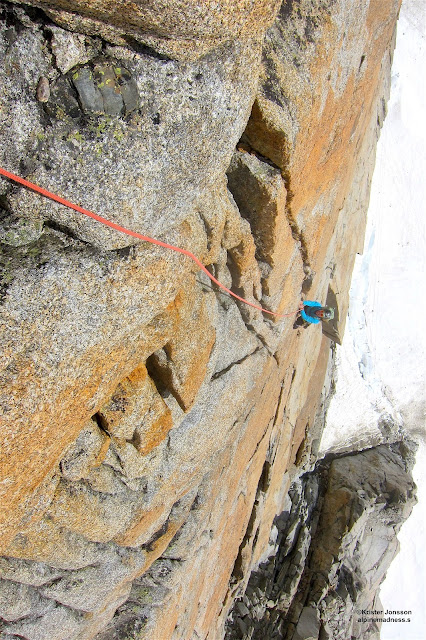 Overall its a straight forward route, good pro, good cracks and a perfect route as on this day with bad weather and thunder moving in on the afternoon.
Also you get the bonus of climbing the Cosmiques aerie as a finish up to Midi.
If you don´t freak out and rappel back down that is. Better then to take a light rack, quick shoes and finish the route. 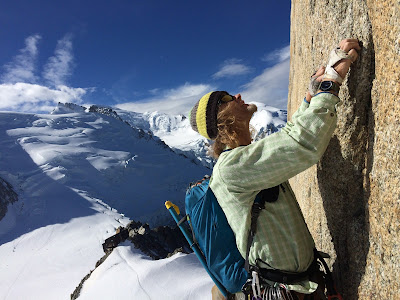 Access
From the top station of Midi go down the arete and traverse under Midi south face and to the left side of Eperon.
Head for the most obvious crack system starting on the left side which levers over to the middle section of the Eperon.

Topo view at camp to camp