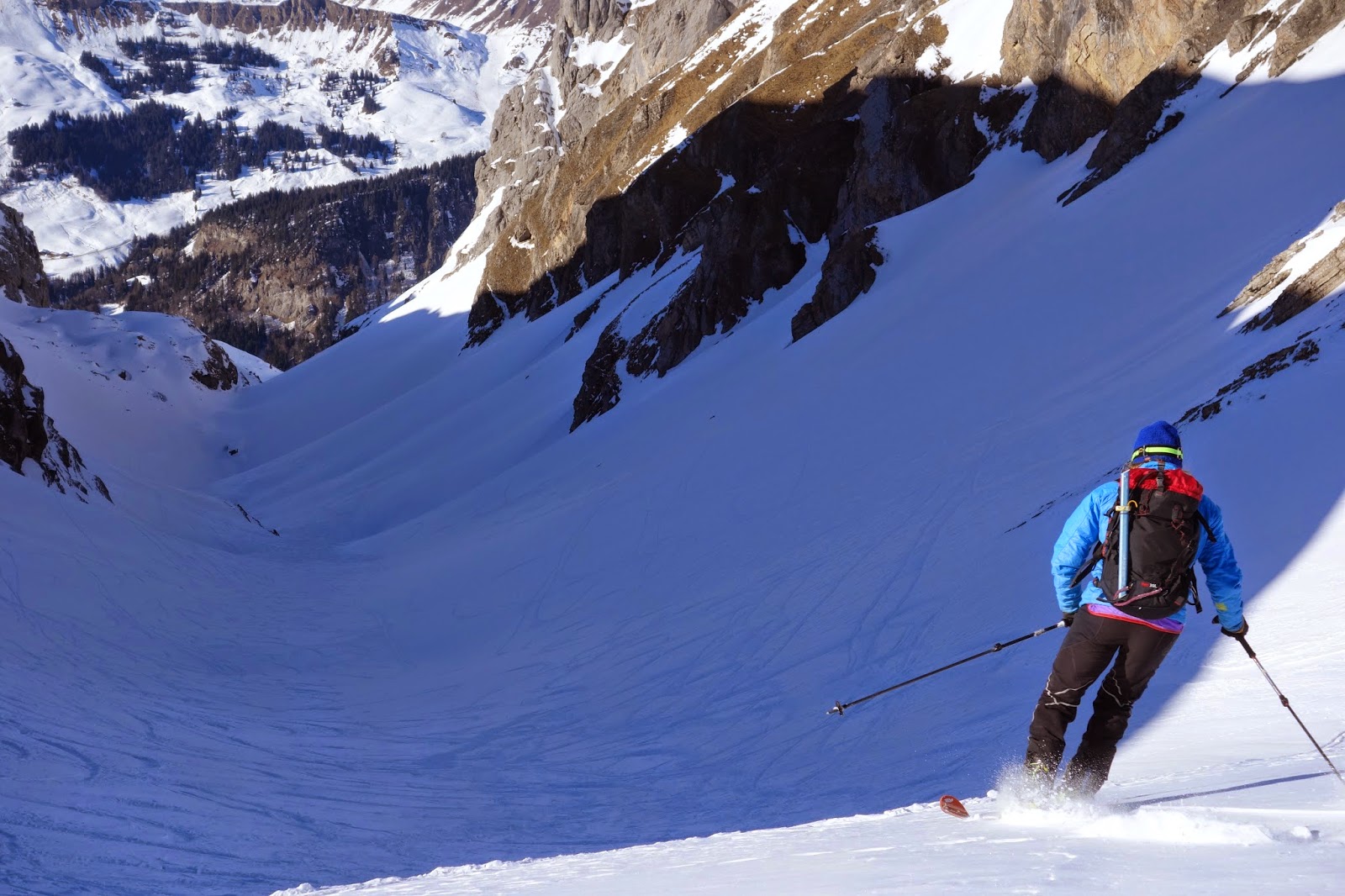 Printemps in the Alps and a perfect time for the combo of ski and rock climbing in the high mountains.
With skis, suddenly the approaches and descents are so much easier, and many times the rock is more of a pleasure. At least if you as me like a bit cooler conditions, maybe even some snow in the cracks to cheer things up! 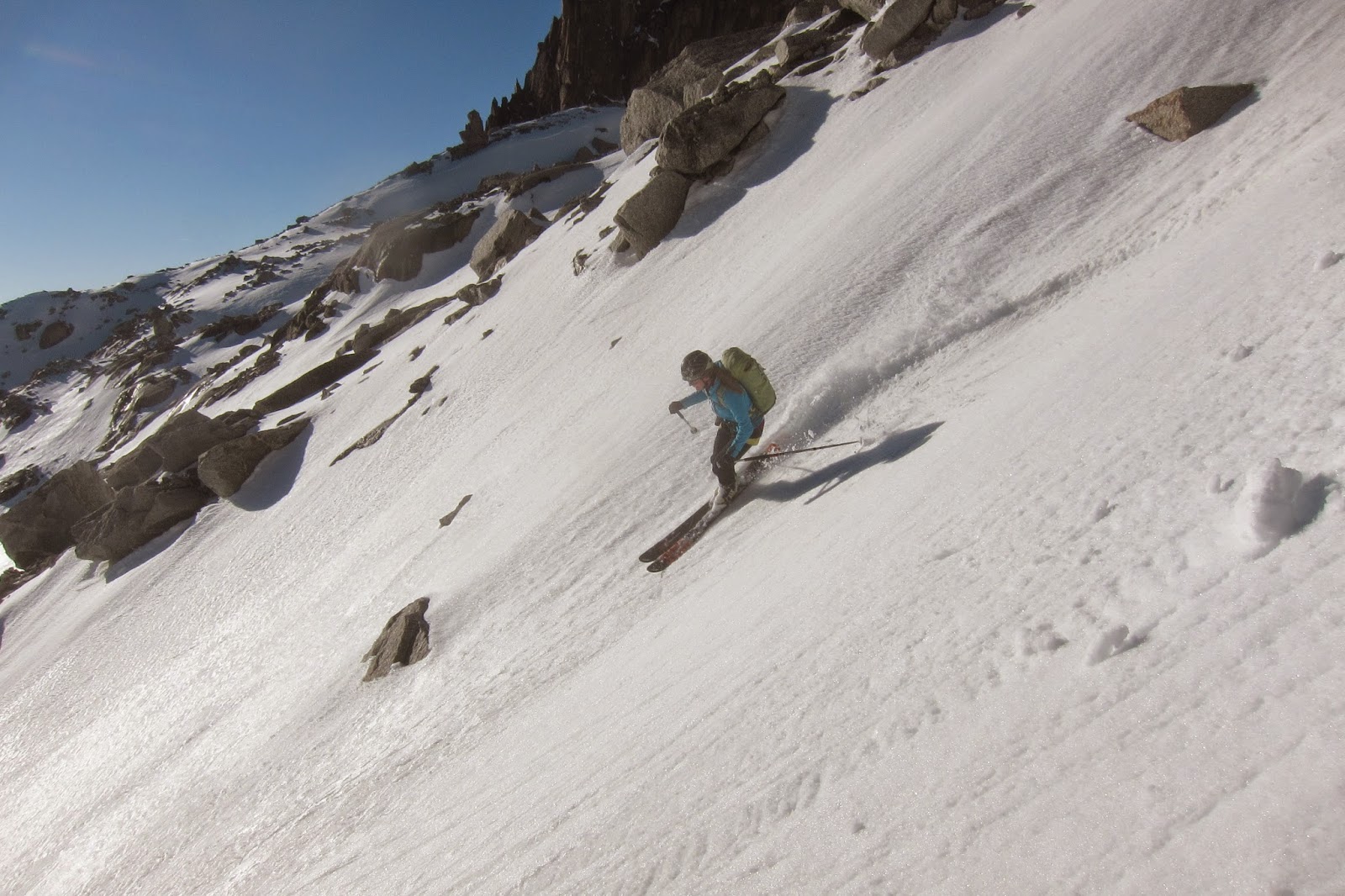 We started up the week with some climbs in Vallèe l´Arve but it was actually a bit to warm. So instead the focus changed to granit and crack climbing in the haute montagne.  And, the best option turned out to be Grands Montets. 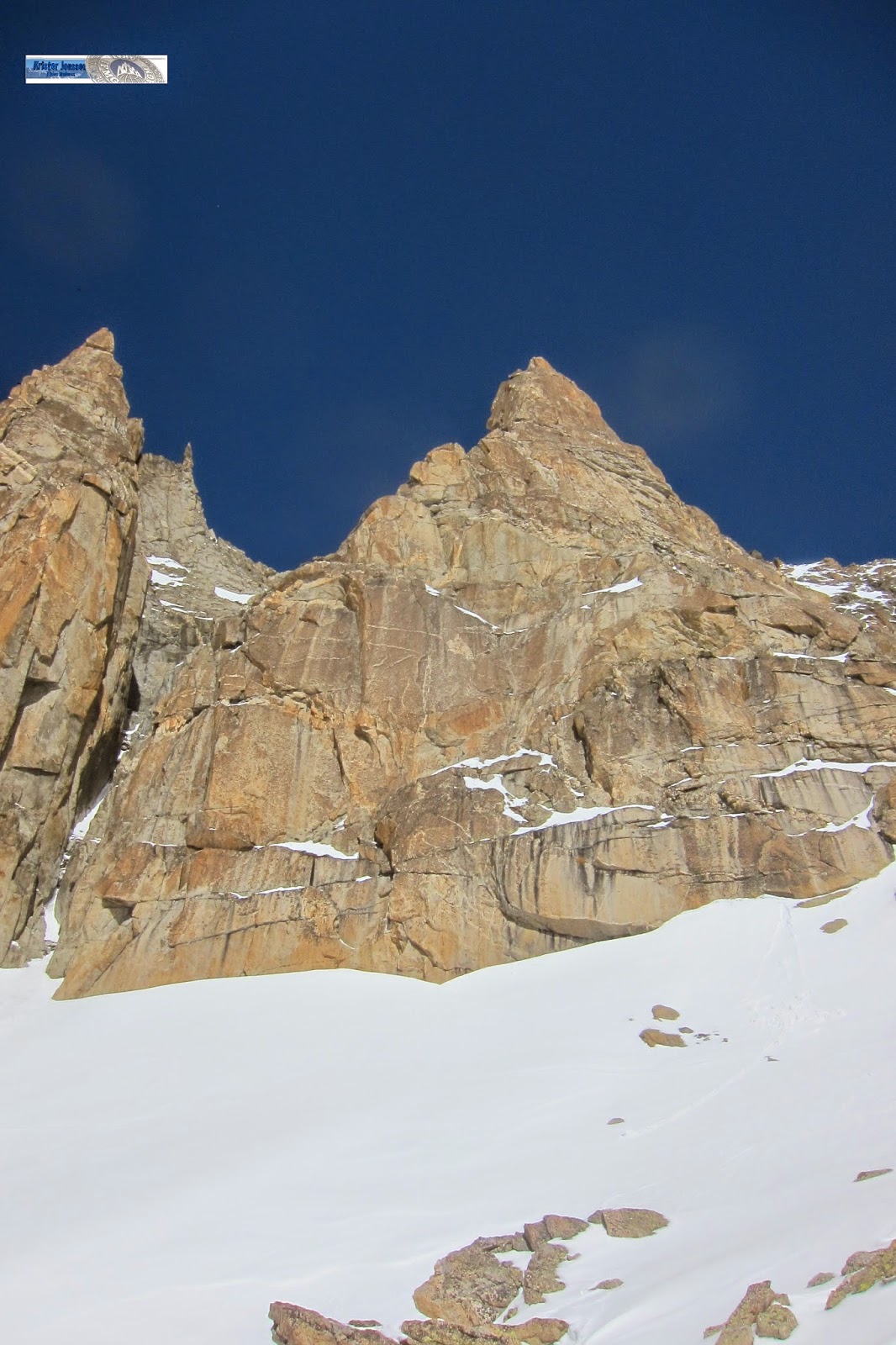 The spring weeks around Chamonix and specially Grands Montets means a lot of ski touring people, with a high number starting the classical Houte Route via Argèntiére. But still with some patience its not to bad to access the summit lift with the goal to go climbing. The days are long in april and with the summer time on its even better. Also the descent back down to the village, you might even get a ”manchester piste”, isn’t close to bad compared to the neighbour ”merde du Glace”. 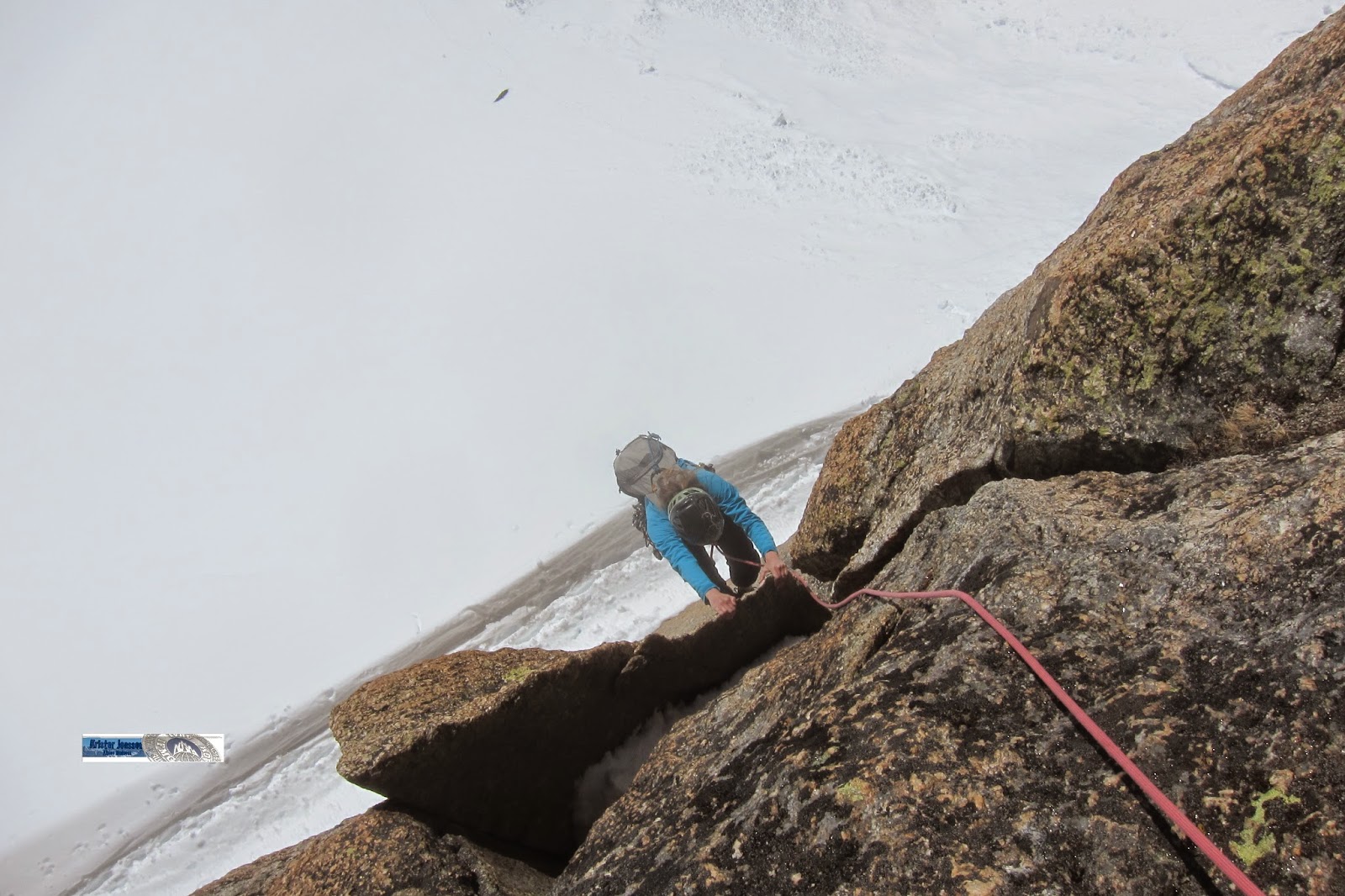 At least for me I find the the approach to the rock climbs on the other side of Argèntiére glacier is a pure nightmare in summer. Ok, maybe not that bad. But still, descending down on my skis, a little skinning up to the start of the climb…well it is practical. Exercise for both mind and body, legs and arms in a most pleasuring way. 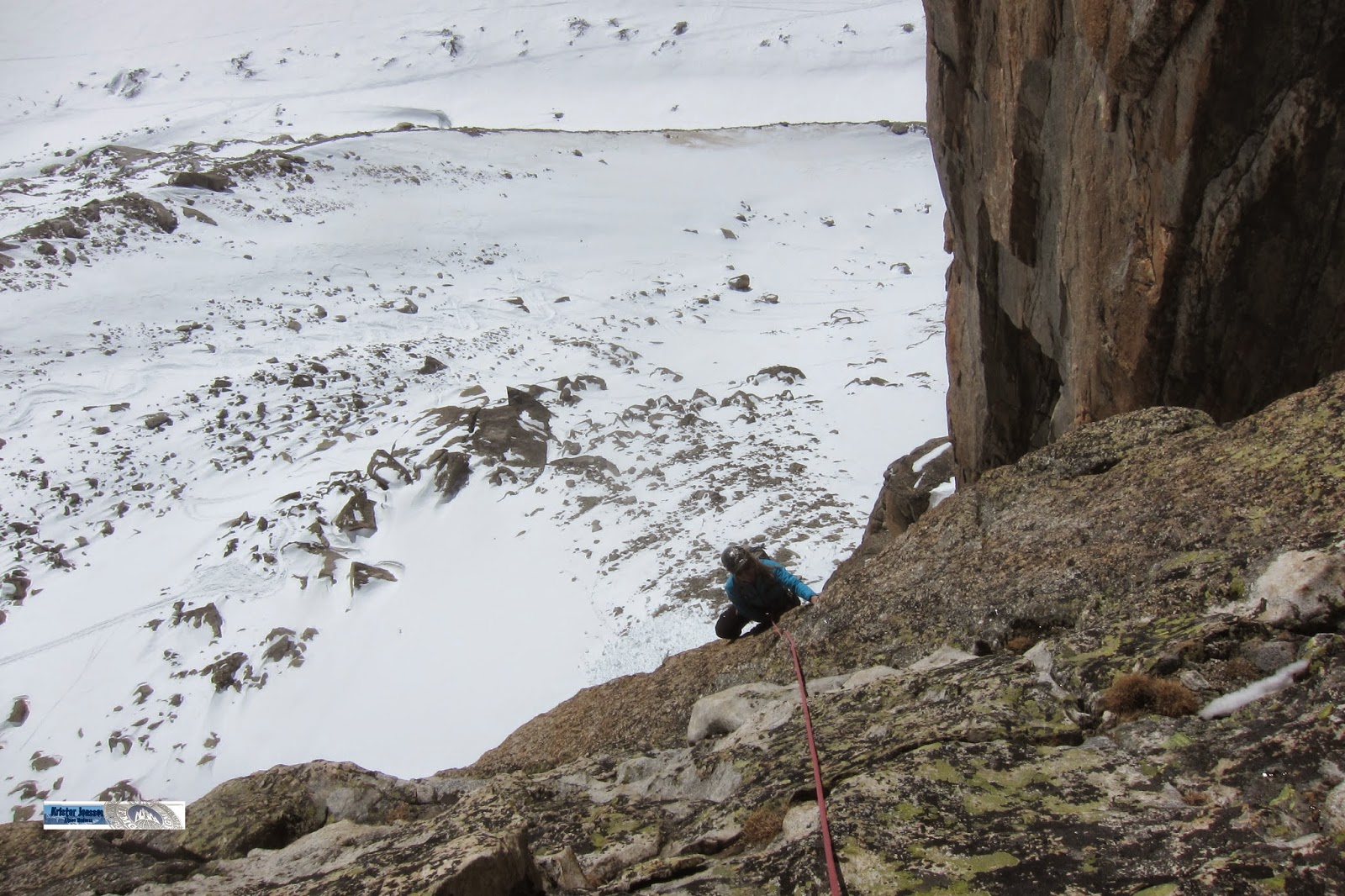 Our first goal was a route that Anna had a go on earlier, but had to turn around from because lack of time.
At that time the conditions was perfect but then we had a big storm passing and suddenly it was almost one more meter of snow. Still, the south facing ”murs” clears up quickly and arriving at the base of Genipi, it was again ok. Almost no snow on it. the "Arete Sud” on Genepi is a grade 5 rock climb, as the name reveals, it goes up the south arete with the crux on the start pitch. 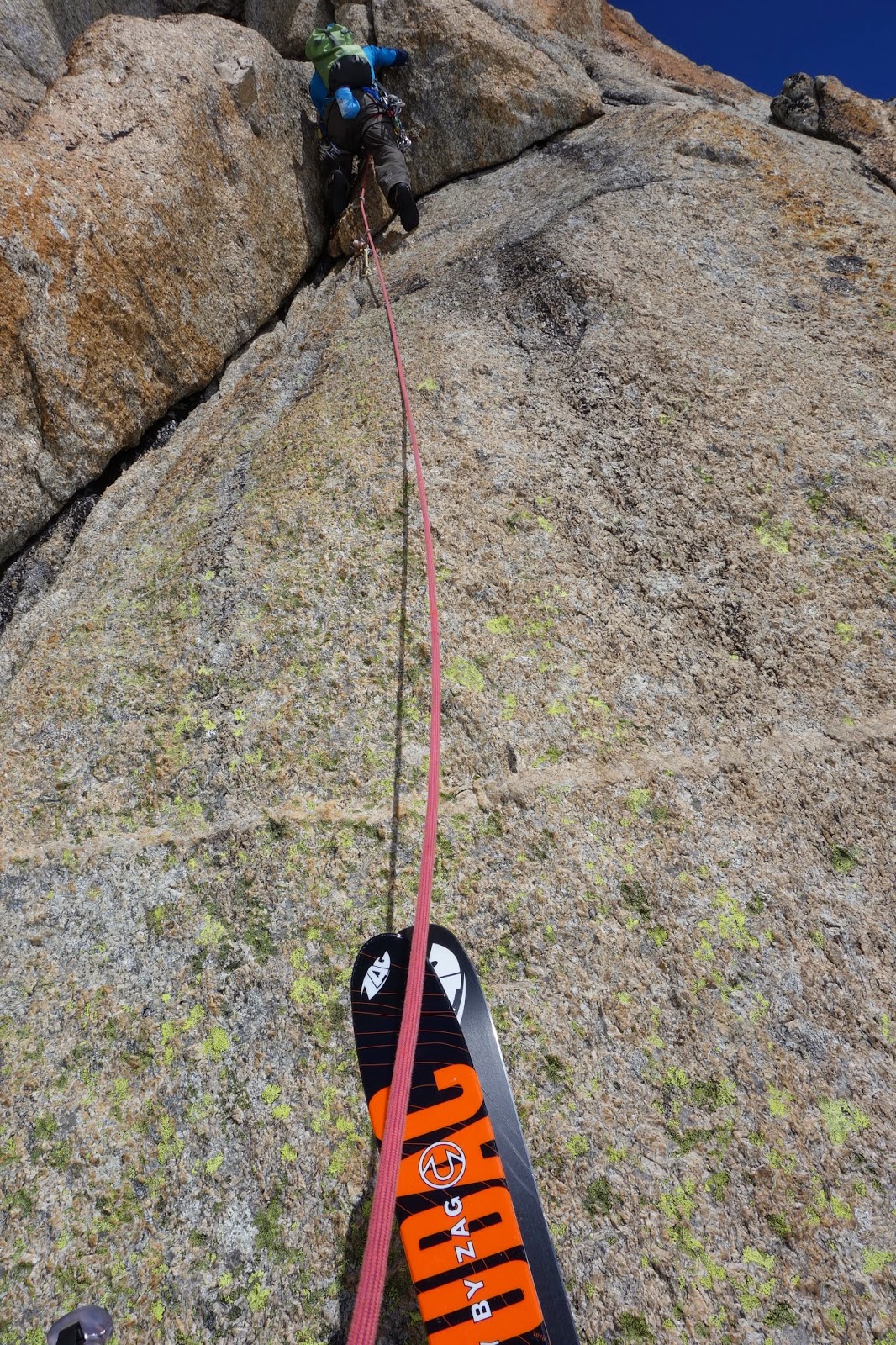 The route finding is quite obvious as well as the protection, just stay on the arete. Its an obvious summit as well. A nice ”ballade” and a good intro to the Cham Rock and its cracks.

Aig. du Genepi
From the summit its easiest to rap down the south face, so it is clever thing to place a pair of boots/skis at the base of the rock. The classic of the sector, pleasing and varied, on a high mountain cliff with just a few pegs but easy to protect and only some 30min approach from refuge d´Argentiere. 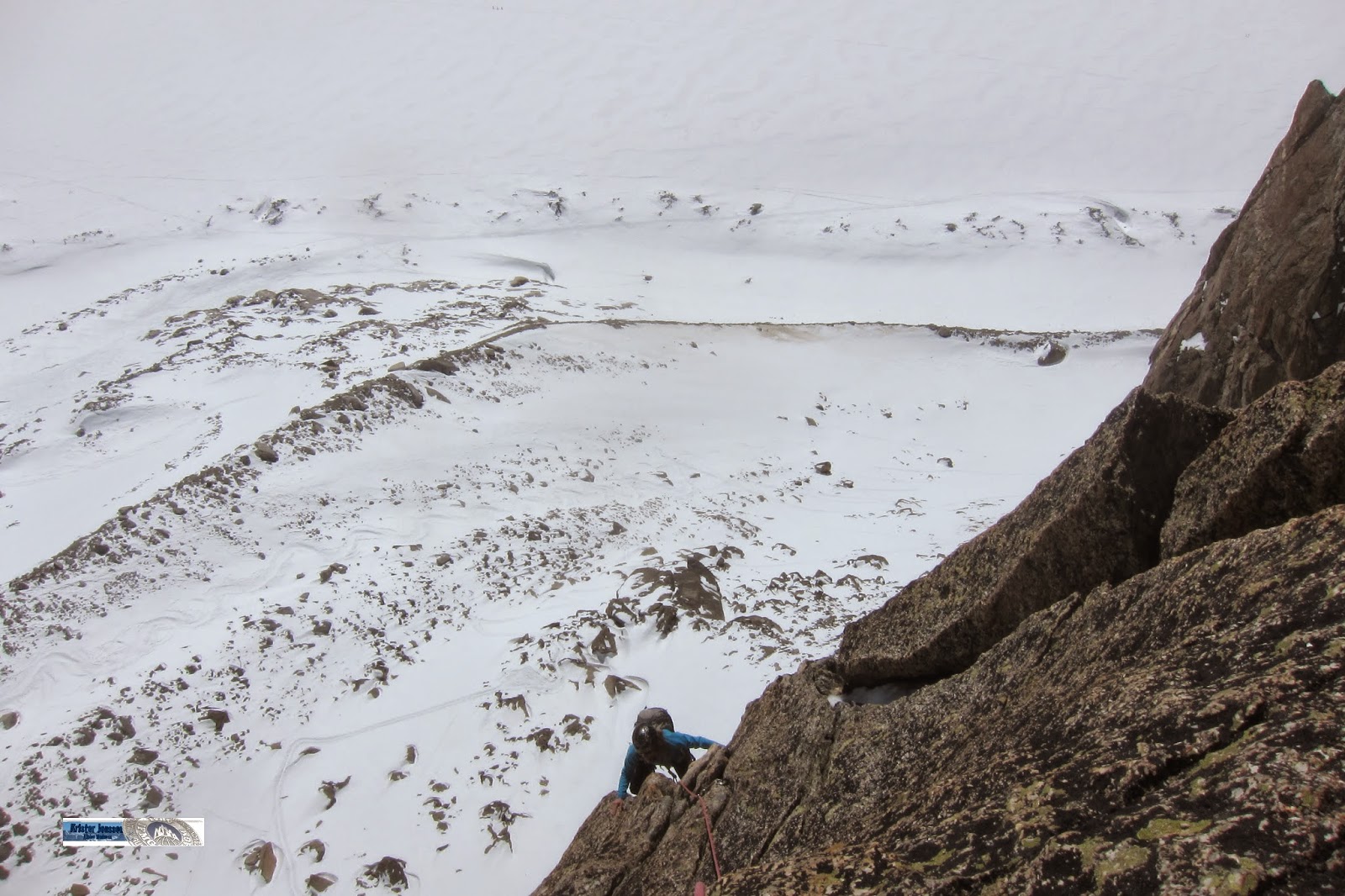 Our next goal was a route first put up by E. Arbez-Gendre et M. Ravanel le 11 mars 1984. A Ravanel route is never to be wrong, he was a man of good cracks. And the ”Singe Bleu” on aig. Jardin comes in good style. A nine pitch route at max 6b, again the crux on the first pitch. 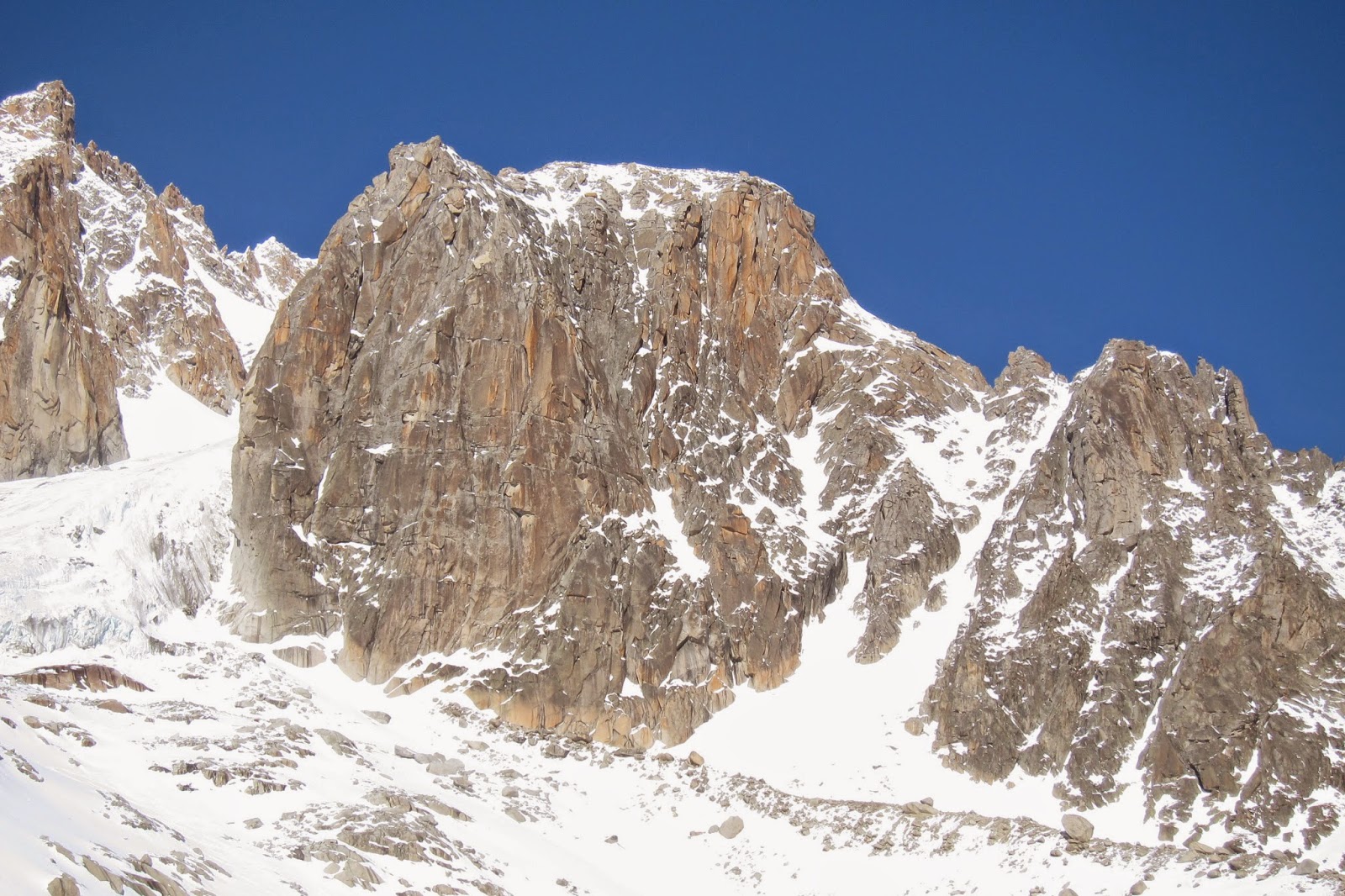 -ok, I just realised that i didn’t put any wires with me…stayed home togheter with the jam tejp…nickel!
Anyhow…its a pinch/crack combo, very good climbing and worth the work to get to just for that one! Pitch two is a 5b on  the paper, a little of a transport, until it suddenly wakes one up and a couple of meters with unsecured steep climbing…lovely!
Above there is, again, a number of high quality pitches and all the way on good anchors/rappels. A suger cake just as good as te famous neighbour Diedre Central!! 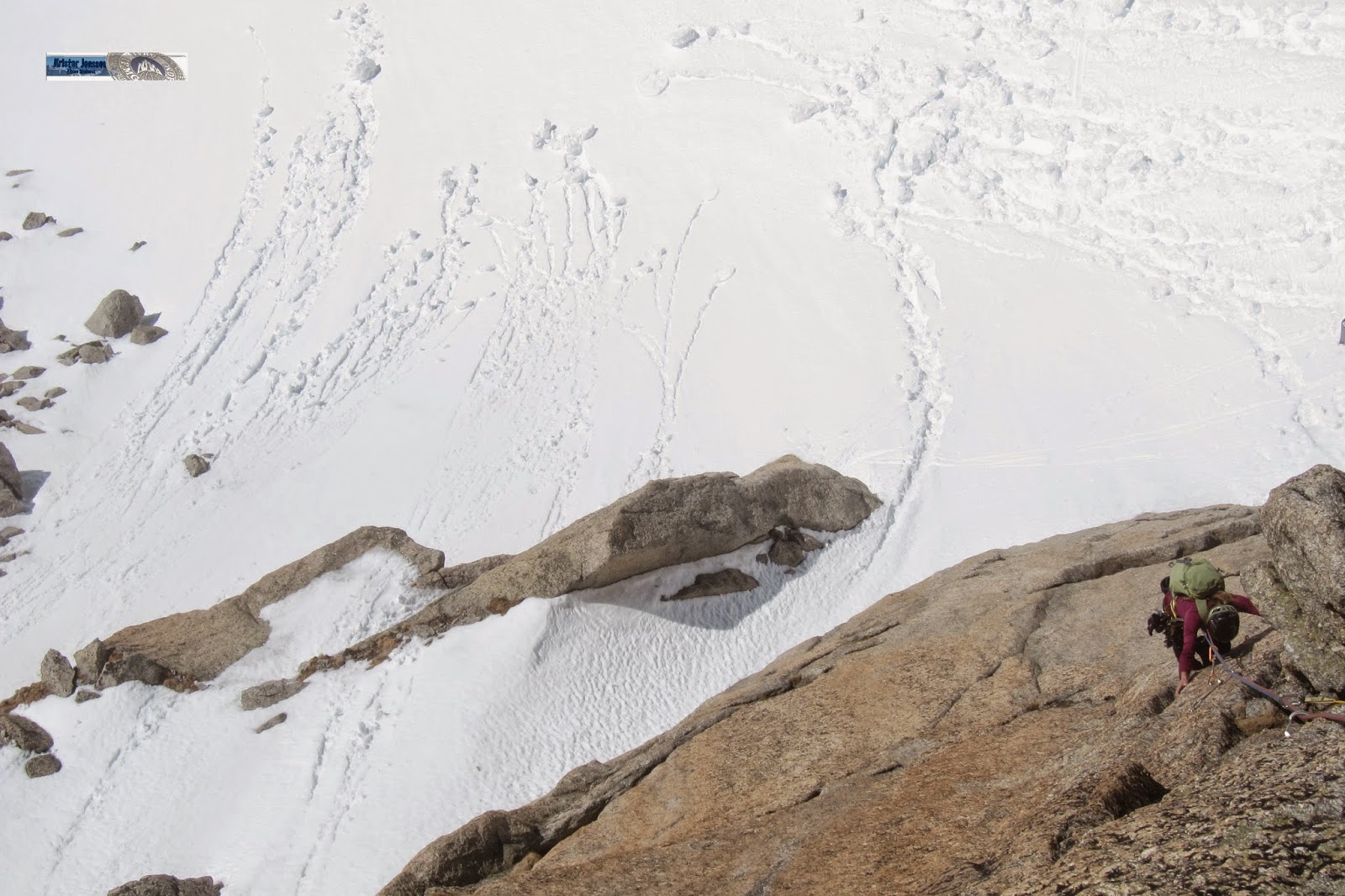 After two days of early mornings the time was a made for a sleep in…its holidays after all…so an easy work out day with single pitch overhanging sports climbing on limestone between coffee brakes. 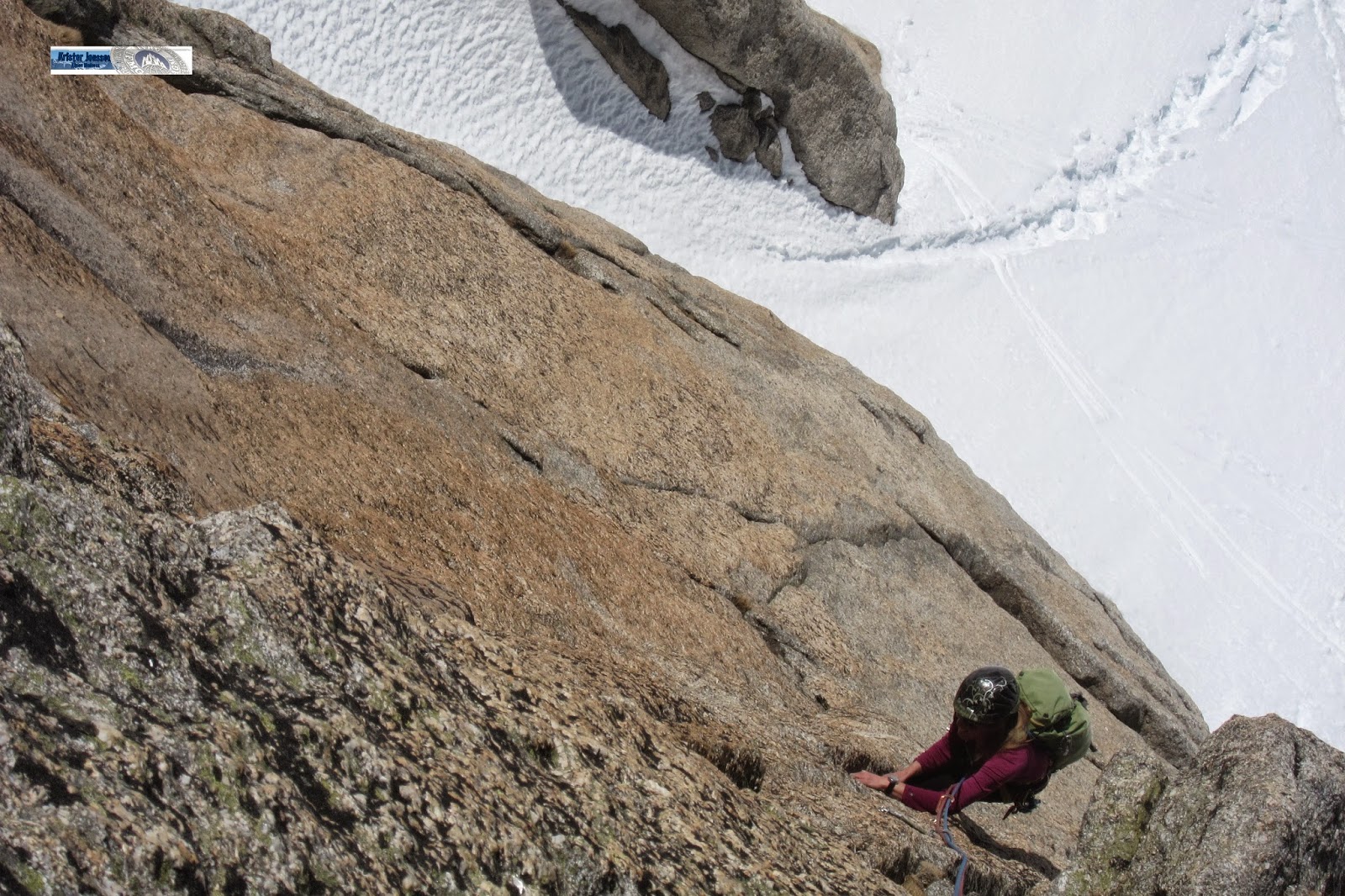 With the meteo again showing sunny weather, the hunger for granit was greater then just bolted limestone. So one more route around the Argèneiére massif should do it. Well, we like to ski as well…so its an easy choice. 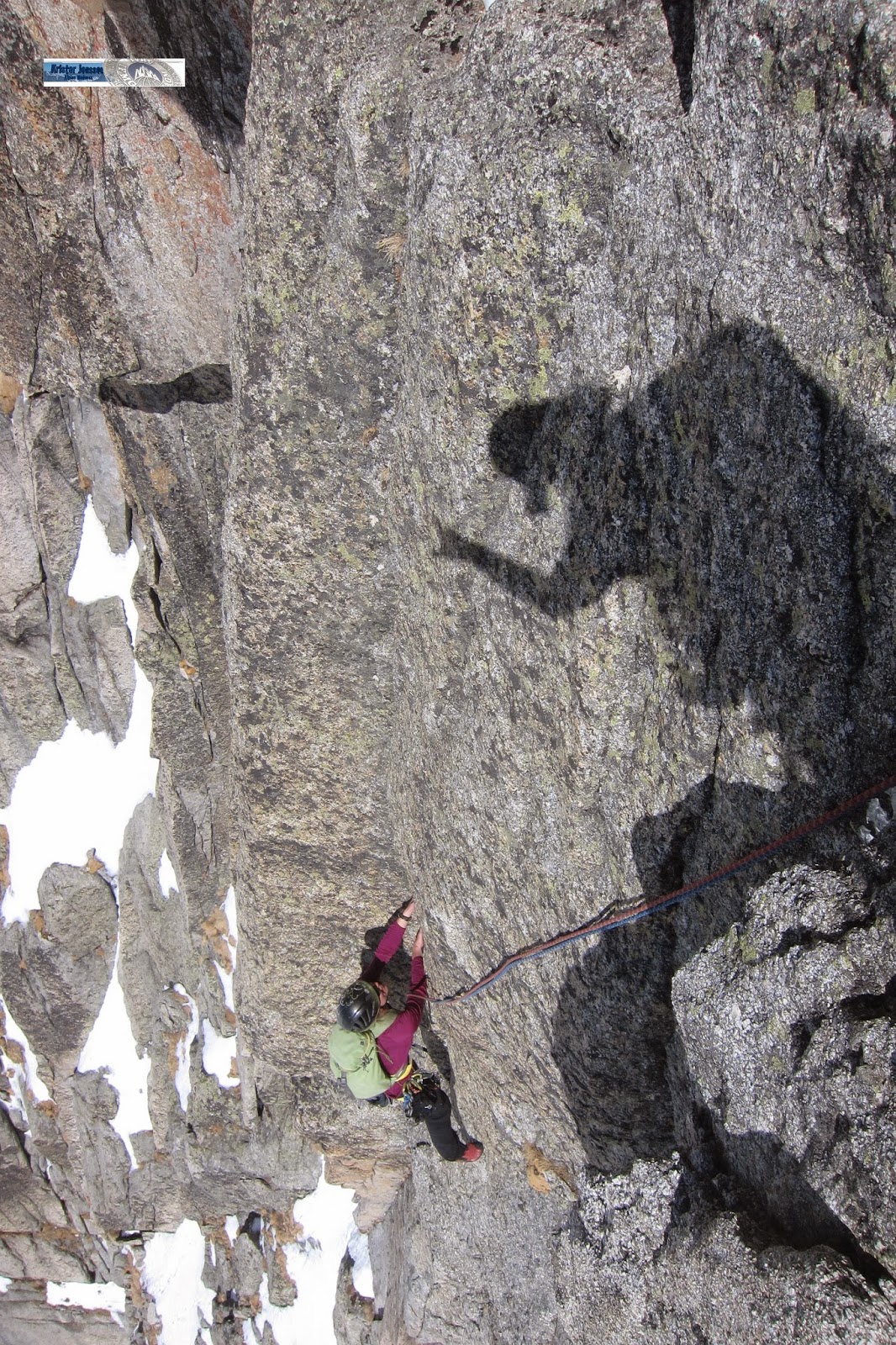 With all the nice sunny weather in mind and after reading le Vertical with all its good reportage, we got hooked on la Vierge. A steep face above glacier d´Argèntiére. Reached via glacier du Milieu. A very obvious face and suposed to be holding some of the best crack lines around. Well, we like cracks so lets get on it!!
An obvious face with a number of great routes…hard to decide, but since Bettembourg was great climber and Alpinist, with the Arete Est on Shivling still fresh in mind, the goal went for his contribution on this face. 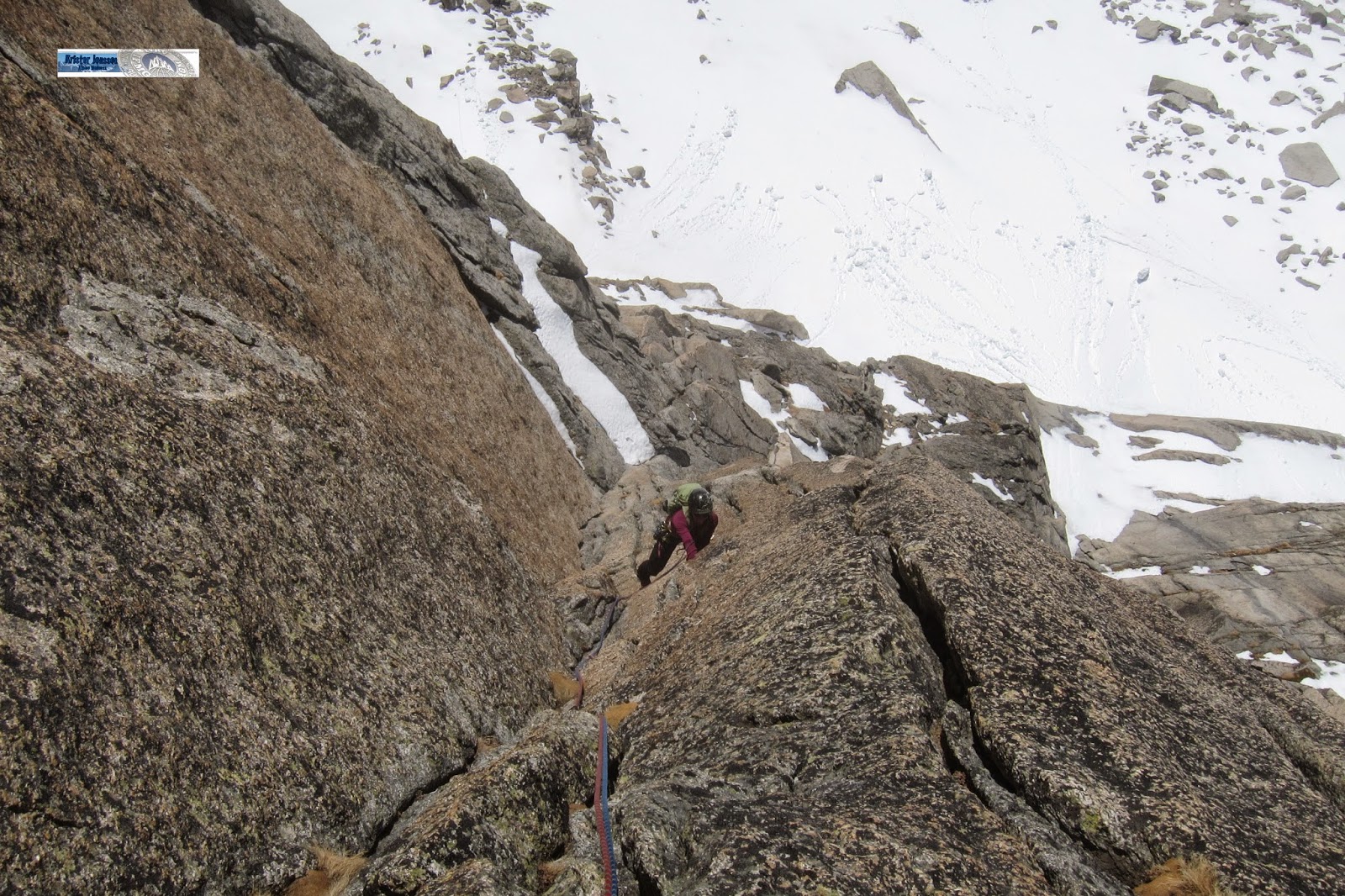 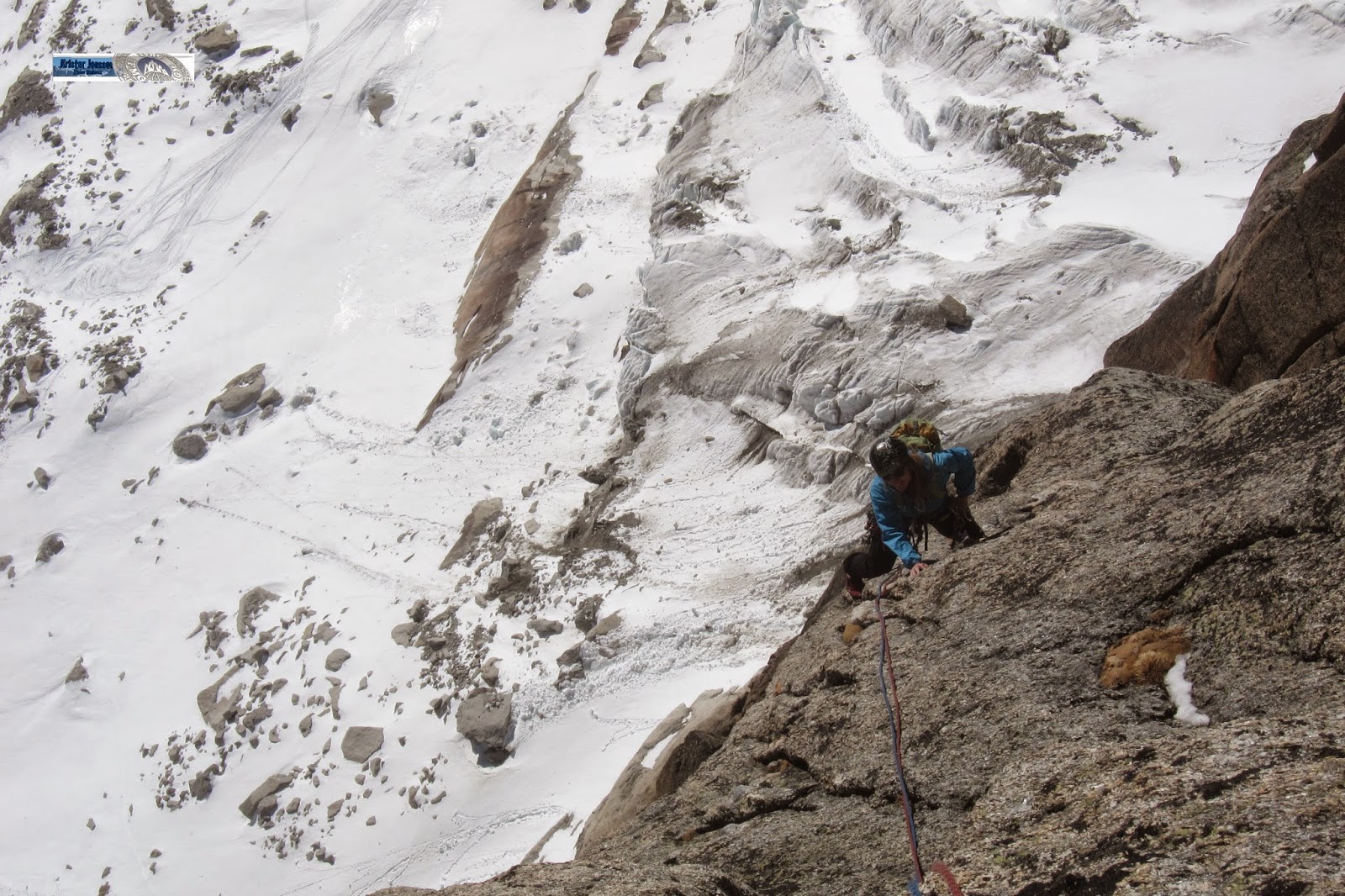 On the drive up towards le Cham, the clouds looks a bit suspicious. Windy sort of, but a check on the web says nil wind on le sommet. OK!?

But sure, once at top it is clear that the decision to leave clothes like long johns and duvet wasn't to cleaver.
To get a little heat I try tone as close as possible with some some of the other heavy dressed people in the bin.
A cup of coffee at the Top des Grandes, best coffee place around in the valley! Warm and friendly as ever.
But after some 10-20min it starts o get a little…lingering. We need to get a move, do it or get off it.
After descending the stairs, with all clothes on, it isn’t to bad after all. Almost a little warm sometimes.

And finally down at the glacier it is actually quite warm. With out any further questions asked I just start to marche towards the goal. Keeping enough distans backwards not to be in a potential discussion about what to do. A look up to the right show 4-5 parties on the north face of Les Droites. So it can always be worse I quietly think, sending a thought to the local PGHM. Might be some work later on here with Droites totally covered in clouds. Maybe some modern alpinistas in race suits!? Hope not!

Skinning uphill towards la Vierge the sun heats up more and more, finally I am in just a thin shirt and open zippers. This is going to be good. An expectation that holds all the way until I am putting my rock shoes on below the face. As on a schedule, the sun disappears and at the same time as I start up pitch one it starts to snow! Just great, thanks!! 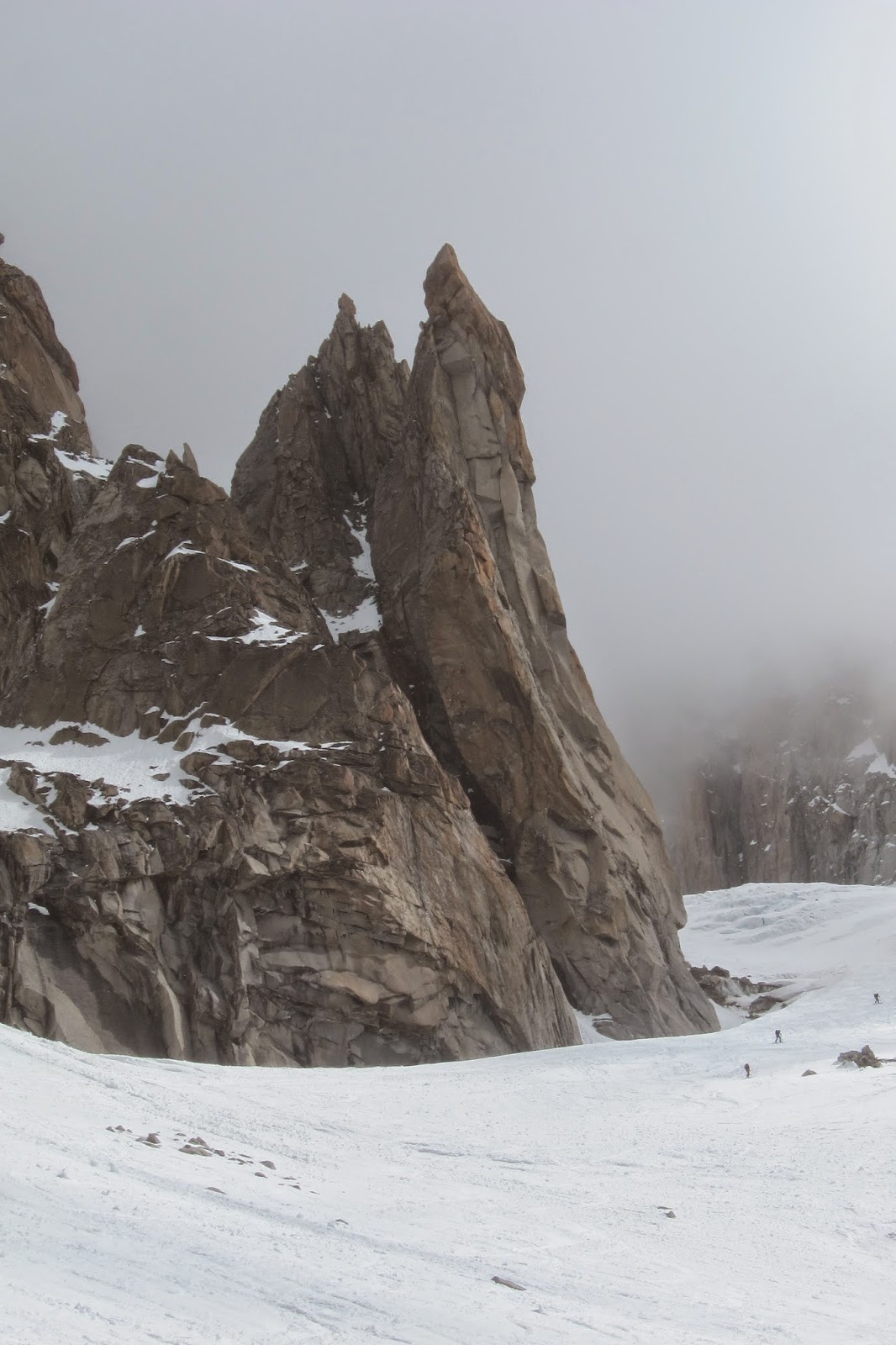 Climbing and blowing back life to the fingers, alternating, full time cheered by a couple of Finnish skiers, I slowly work my way up to the slab crux and the the crux of the whole route. The roof! Good pro with a bolt and a red alien I slide over it and then gets a little easier ground for a while. Only thing is that its wet from the snow, so still slowly I continue onwards to the second but smaller toiture. 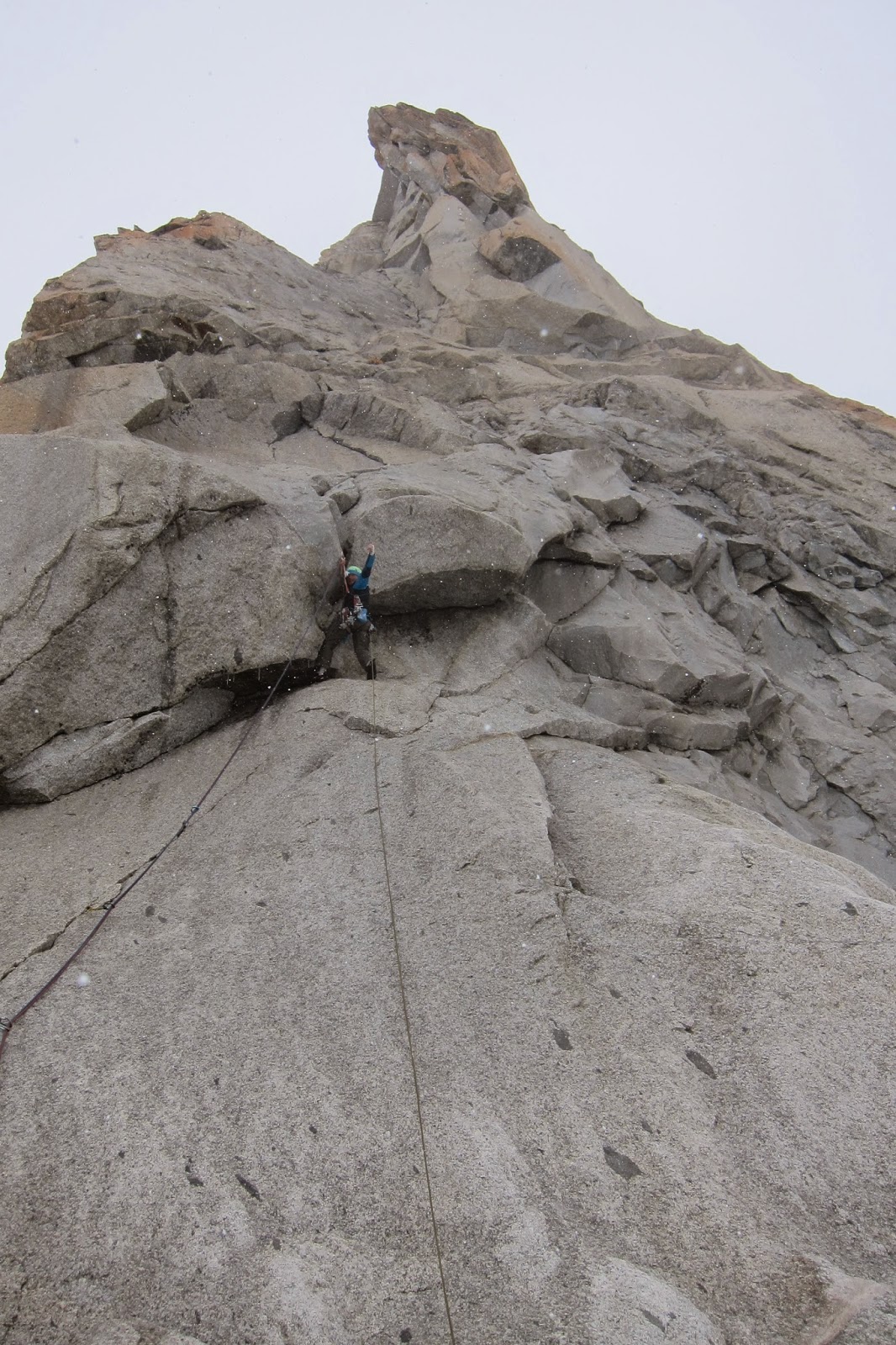 -Are you on good pro? Anna ask from below
-Well yes, think so. I got two heavy pieces here…actually just one, the second just came back out :-)

Finally, after a big struggle I am at the belay, still snowing…. 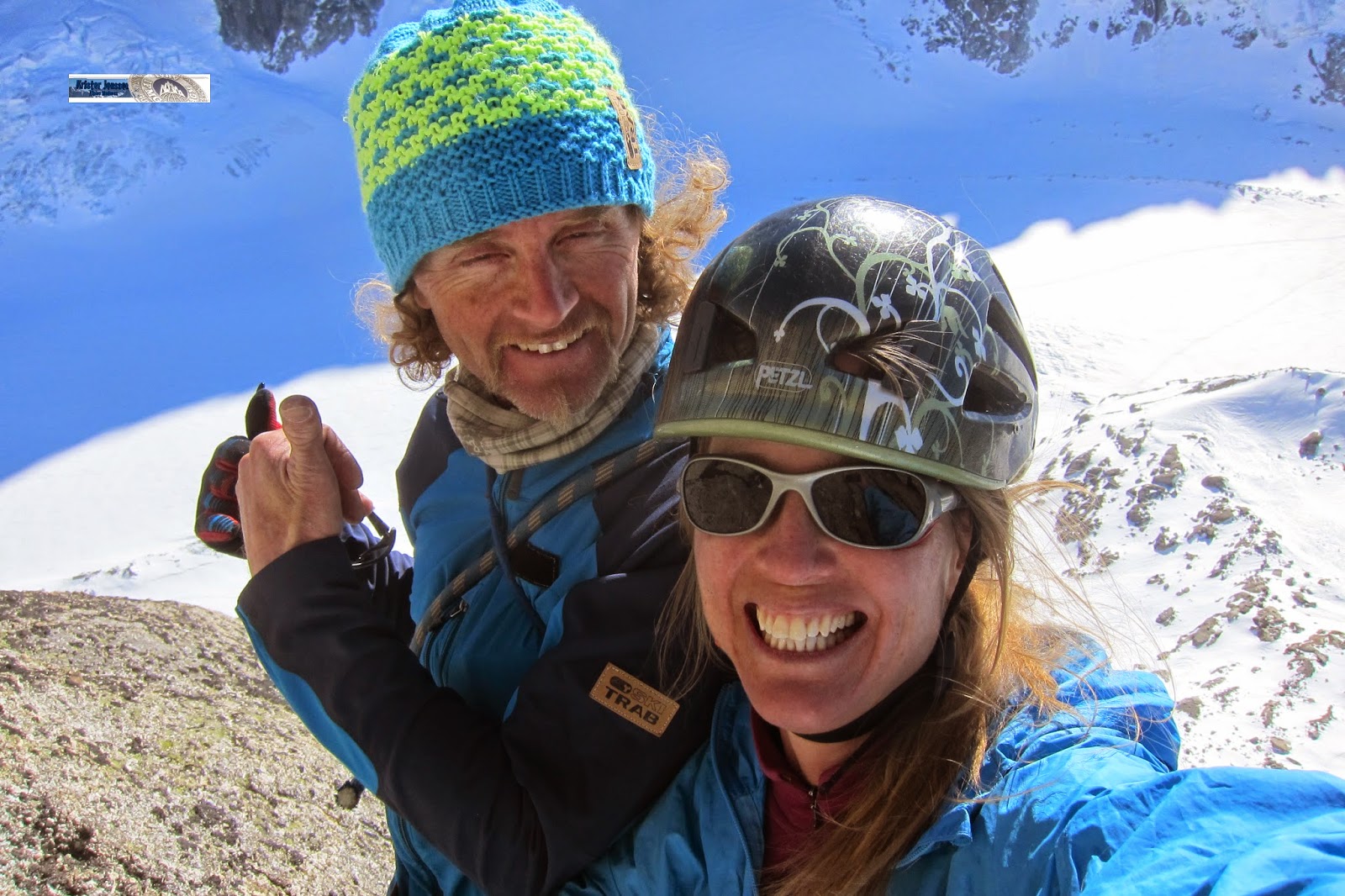 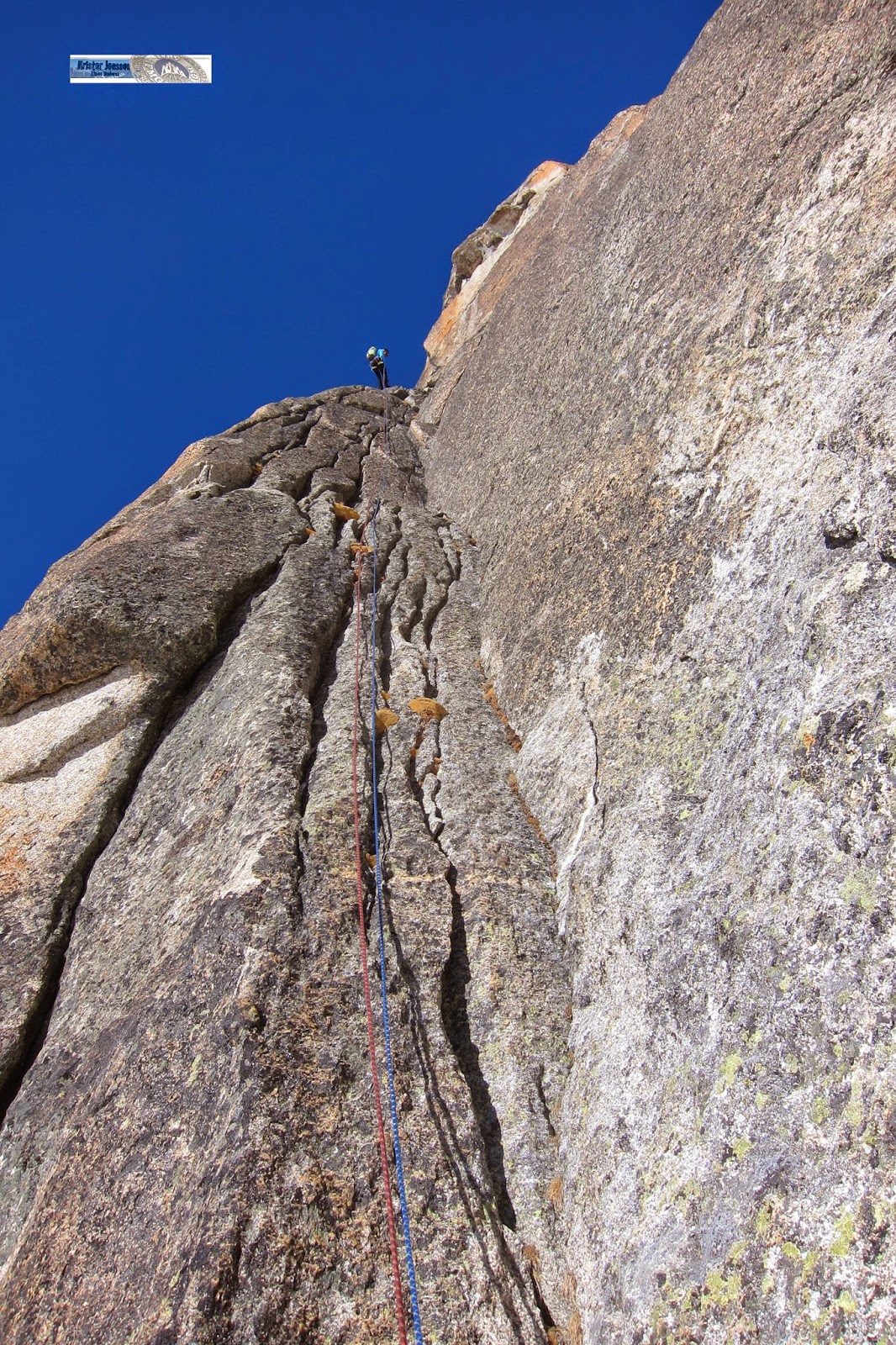