Les Gillardes - Dévoluy
The opening of the routes on this spectacular steep face is something to take the hat off for.
Just to find the possible lines up this slightly overhanging fearsome rock face shows that monsieur Bruno´s Martel and Béatrix has a good feeling and a talent of putting up nice lines. 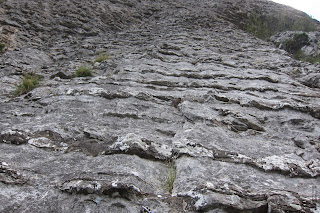 Apparently it took some 10 days to open a route over this 400m committing wall and I believe it. Just climbing it ”en route” takes the most out of the forearms and you have to be strong in your mind, keeping focus and believe in your self.
Because the distans between the bolts and pitons are almost binocular distans, specially on the easier parts of the routes.
With run-outs over 5-10m a fall will be painful and not an option. But, on the more difficult sections and cruxes there is often a good piece to clip in to. 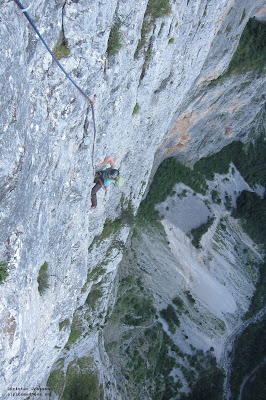 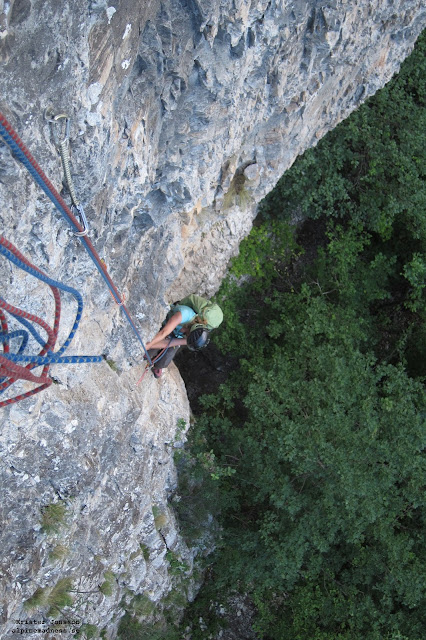 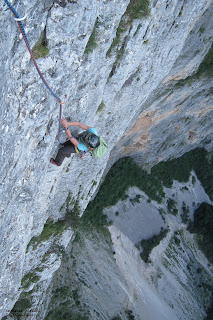 Maybe the ”little Brother” syndrom of feeling non accepted from the bigger Haute Savoie neighbour Chamonix has lefts it signs since the grading is kept quite hard and the distance between bolts are very engagée? But anyhow, a visit here is a must and it is definitely one of the best places in France for long steep multi pitch climbing on beautiful rock formations of plates and cubics with an atmosphere of herbe. Because there is still a bit of cleaning to be done but the small flowers and bushes just makes the feeling of the climbing more alive. As long as you are not to allergic that is!

If you can find the harmoni and confidence you will have some great days on this wall. Just make sure to load up with glycogen because none of the pitches has the character of slabs.
Gear up for a small adventure and at a certain point if there is trouble, it is possible to make a retreat, up to a couple of rope lengths there is rappel anchors. But don’t count on that the whole way. The best chance is still to make it to the summit.

And once on top the descent is very pleasant with a magnifique view over the surrounding mountains as pic de Bure.
And walking back down to the village and the road is very pleasant. Much nicer than rappelling the 400meters down the face.

The classic and first route put up here is ” Sous la Griffe de Lucifer”. A 6b/c full on routine the middle of the wall. And a ”voie sérieuse”. It has the same start as an other grand route ”les Premiers pas d´Elsa” 7a. Which is a continuously technical and physical route with a lot of hard pitches involved.

An other classic and must do is ”Forts Fainéants Frileux” 16 pitches of athletic climbing with the hardest climbing in the middle and the top. The sortie at the top section will put the mood in for sure.

If you find the 20min approach to long there is an other couple of routes a little closer to the bridge and the road. Try out ”Association de Bienfaiteurs” 6c. 300meter climbing with some spectacular roofs!

Point of depart
Park at the bridge sign Souloise between Corps and Saint Didier en Dévoluy.
Walk over the small bring and go left,climbing over the wall, there is a rope attaches with a bolt close to go down. Follow the path for 20min up towards the face.
Retour
Go south, right, trough the woods. There is a distinct foot path down to the hameau des Jouves. 30-40min walk to the road.
To find the start of Forts Fainéants Frileux follow the path to its end, there is a small tree and a bolt at the bace.
L1: Go a couple of meters left of the pin. L2: Climb up 4m then head left on a travers.
You need
Materiel Rope 50m, 12 QD´s. A couple of longer ones, 60cm, is useful
Equipment in place, bolts and pitons

And for an even bigger adventure, look around the corner of les Gillardes, la Grande Roche. 7a over 500m ”la Balade d´un Bienheureux et d´un Sauvage"