How to tie in to your harness

Fact: Tying in, whether you’re threading the rope bottom-up, or top-down, is the single most important part of your climbing day. There’s no room for distractions. So whatever method you’re comfortable with, and will nail 100% every time, that’s the “safest” method for you.
But, is there a best or safest method to tie in to your harness? 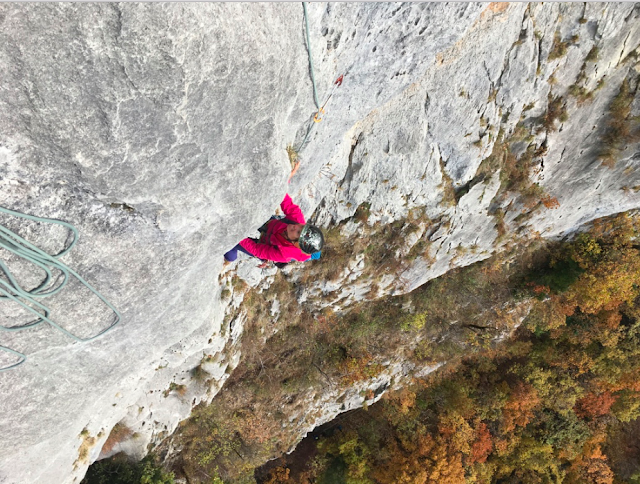 You always want to ensure that you tie in to both the leg loop and waist belt tie-in points. Personally, I learned to tie in bottom-up, and since I am quite a bit of traditional and superstitieux person I have stayed that way. For me it also makes sense to see the eight well in front of me when I have thread the first part of the eight in my harness, making it easier to follow out, nice and clean. But this is when I tie in with a figure of eight.
When I tie in with a bowline, I always thread it top-down, because it makes a cleaner ending of the knot when I secure the extra rope with an overhand knot, which then sets on the downside of the harness, away from the loop. And, it is also easier to measure the length of rope neede for the knot, from the loop to my knee is the perfect length to tie and secure the knot.
Also for Adam Ondra*, the method depends which knot he uses: “With the bowline I go top down,”  “With the eight I go bottom-up”. A quick look shows that many other climbers do the same. U.S. National Champion Sean Bailey* and Patxi Usobiaga* are bottom-uppers when they tie in with an eight.
Swiss mountain guide Mathias Hediger/IFMGA has his opinion clear;
”for classic alpinism I am doing figure of eight and for sportsclimbing with lots of falls I am using Prohaska but double or backlooped with double guideknot”

Some people argue that the rope should be thread from above, which reduces the risk of missing the waist loop. If your only tied in to the legs, you will most likely flip and fall up side down, in worst case even fall out of the harness. But, if you ever taken a fall in a Swami belt only, you will have learned the reason why Bill Forrester, already back in 1967, came up with the first prototypes of our modern style of harnesses with integrated leg-loops. Leg-loops are designed to take most of the load when falling. Something they already then knew was the best way to make life more comfortable after a leader fall. In lab testing, it is shown that the leg loops take 70 to 80 percent of the load in a fall. So, if you were to only hit one tie-in point, the leg loop is the one that takes the majority of the load.
So again, the best is of course to do it right and make sure both loops are in the rope. The interesting thing here though is that in my survey most climbers, mountain guides as well as amateurs and climbing professionals, tend to tie in bottom-up when they tie in with a figure of eight. So, my theory (and something most people asked respond to*) is that the knot itself is easier to control when tied in bottom-up.

Then next question, how do you tie in to your harness, in the belay loop or in the waist+leg-loops? Again, personally I do both.
The belay loop is the strongest point on the harness and the only part that is load tested. Anything hard should attach to the belay loop (e.g., a locking carabiner while belaying or rappelling). When reading on rei.com they strongly advice; ”Warning: You should not tie anything around the belay loop, including a daisy chain or sling. The belay loop will wear through quicker and is not designed to be used in this fashion. Belay loops are made of nylon webbing.” (https://www.rei.com/learn/expert-advice/climbing-harness.html)

A few years ago the Germain Alpine Club, DAV, had this discussion on the table. Tying in to the belay loop was thought to be less material consuming and the rope would not move around as much when clipping in on lead, thus way save the harness and make it more secure. This turned out to be more of a theory than the truth. But, DAV, tested both variations and at one point actually recommended to tie direct into the belay loop instead of leg+waist loops. Nowadays they recommend both variations as equal.

Personally, like the German mountain guide Stephan Schanderl, I use both. Just depending on the situation. Most of the time I tie direct in the belay loop, it is the strongest point, and then I use the figure of eight. When I climb something that I know I will have potential to fall on, I more often use variation of the bow line called the " double Prohaska". Since it is easier to un-tie after a fall. And then, because of the construction of the knot, I tie in to both loops, leg and waist, and top-bottom.

A small detail with a huge mythic touch.

Note: All knots and variations here written in text are from our own experience with no data from any test lab.

Email ThisBlogThis!Share to TwitterShare to FacebookShare to Pinterest
Etiketter: How to tie in a harness, knots