An other weird winter has passed in the Swedish Lapland

With the accelerating climate change the weather pattern is becoming more and more unpredictable. Well, in one way less unpresidential because one can be quite sure that it will not be as the normal winters as the once I grew up in. With long periods of cold stable weather. Instead its rapidly changing between warm and cold, a lot of precipitation which comes as rain even in mid january. But the biggest issue is the wind factor. Those days with huge snowfalls with big snowflakes that penetrates the air and forms a soft white layer on the ground, these days don't show up too often anymore.

When I look on the pictures and movies from the last winters I find a lot of great skiing, with big powder days. But the amount of stormy days with short movies where people are falling over, loosing balance and close to not being able to handle the equipment because of the strong winds, these days have a big number amount of days as well. That together with the rapid change of temperature makes off piste skiing quite difficult, with unstable snowpack and unpredictable slopes.

As always I spend a reasonable amount of time in the mountains of Kebnekaise each winter season. And my favorit time is April. Usually the snow has stabilized and the biggest avalanches has normally come down. And, the days are getting longer. I had a few lines from last year in mind that I wanted to try out. One is the obvious couloir that descends from Singichokka to the left of the "Last in Line" This is a quite technical route as well, that ends in a vertical section over steep rock, that would definitely need some rappelling. Said and done, I was lucky with a perfect weather spell on my only free day! After a quiet breakfast on a slow monday morning, all the clients from last week had left Sunday lunch and new clients arriving Tuesday afternoon, I had a full day for me and myself. Perfect timing!! With 2 ropes, a 30m and a 50m, in my bag. Some pitons and slings, ice axes and crampons and my new weapon, a Milwaukee, at the bottom of my ski-pack, I was ready to set of. The approach in the valley was easy on hard snow making it easy to move quickly. At the bottom of Singichokka I had seen the best way of getting up to the start of the couloir via the south east side and a bigger formation/couloir that looked easy enough. For sure the quickest way up which would make it easy tio find the descent line. Going up the couloir isn't an option for this one. Climbing the rock section looked enorm and would turn it into something else than this days goal - skiing!

From the marked trail at the bottom of Singi I started up on skis towards the steeper sections above. After a few hundred vertical meters I had to put my skis on the back and steeped into my crampons. The sun was heating up quite a bit, but the clouds in the morning should have protected the snow in the couloir enough to keep it soft. But now the heat started to make the snow quite heavy on the south side, building up snow under my crampons for every steep. And worse, starting to send down rocks from above which forced me to be really observant and quickly move from side to side when some bigger stones came tumbling down the face. To avoid the worst parts I aimed for a section of steeper snow out left, trying to stay protected from getting avalanched with climbing up as close as possible to the rock face. But at one point the only way was via a few steeps out on a bad looking section of 40° snow. One steep out and there was something as a gun shoot. And all went quiet!! Slowly i took two steeps back in my previous foot steeps, as light as possible. Wow, it stayed! Reversing down the same path I was forced to go up a more narrow couloir on the right instead, taking the risk of rockfalls. The only other option was returning down, and that wasn't an option really. 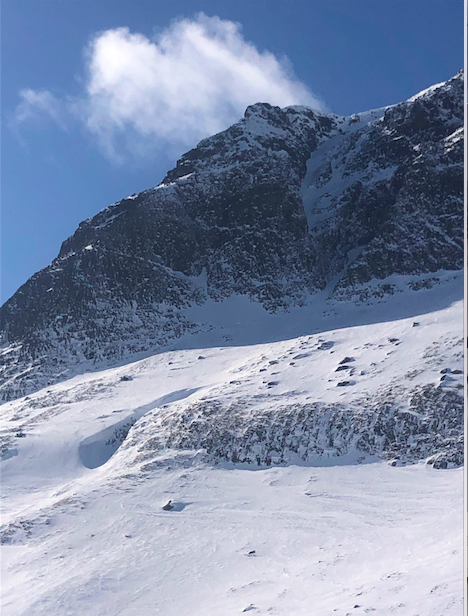 Some 100 meters in the couloir and I could move out left again climbing over slabs and stones, well protected from avalanches and rockfall. And with my two ice axes I quickly made progress, even though that the snow kept building up under my crampons all the time. Two steeps, cleaning of the snow, two steeps... frustrating!

Finally, I stood on top and the goal of the day showed its entrance. A huge avalanche had come down over the top part, as well as that I could see what looked like an old release edge lower down in the couloir. Which made me feel somewhat better. Now it should be clear, more stable...probably. Arranging the tools in the back pack, putting everything in the right order and range the ropes / tools and harness on. Just sending the picture and position to my wife and I was ready to set off!

The fist section was over a bit of ice, quite steep to start with. But after i could ski into a part of lower angle and stable snow. A few deep breaths before sending into the couloir itself, trying to stay protected closer to the rocks and making as light as possible turns to get a feeling of the stability. And it soon turned out that the cloud covered sky in the morning had kept the snow soft and protected from the direct sun ray. So no crust and a little dust, actually quite a lot on top.

As I had seen from below the line got steeper and steeper and I could see the cutting edge from an old avalanche that had broken off from the second part of the couloir. Some 40cm fraction line. Speeding up the lower part I safely arrive to the first point of rappel. And quickly decide that the Milwaukee will do the job. A 30m rappel from a single bolt to the next section of skiing, just a short 40m descend to the next rappel point and placing an other bolt before rappelling down a narrow slightly overhanging chimney. Safe down to the exit and the last and relaxing part of the descent out back to the marked trail!! 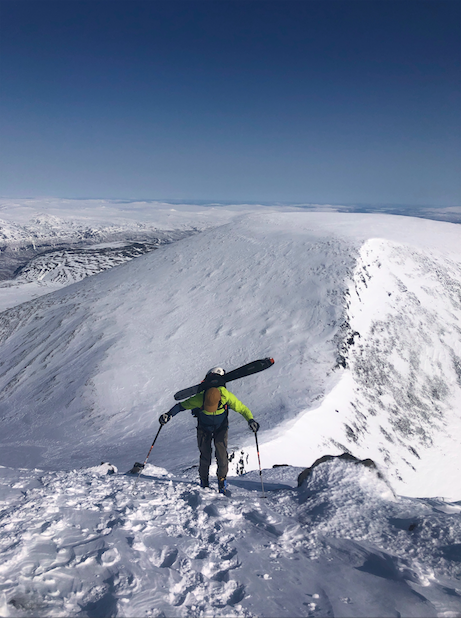 An other objective that I was able to ski was just by coincident while passing trough Unna Räita and Unna Reidavaggi. From the summit of Niibbas, 1902mts, there is a few easy accessed lines. One of them is on the north west side from the small glacier that goes up betweenPyramiden and Niibbas. With some extra power in the legs on the way back towards Tarfala we made a quick hike up to the ridge line and found a descent with some variated but enjoyable snow. The way up we scrambled up the same way as the line of the descent, using crampons and an ice axe as support. This couloir is also very obvious but not really easy to see the upper part from the Unna Räita cabin, but once below at the glacier it shows a quite spectacular ride. Well worth doing with a small effort of bootpacking. 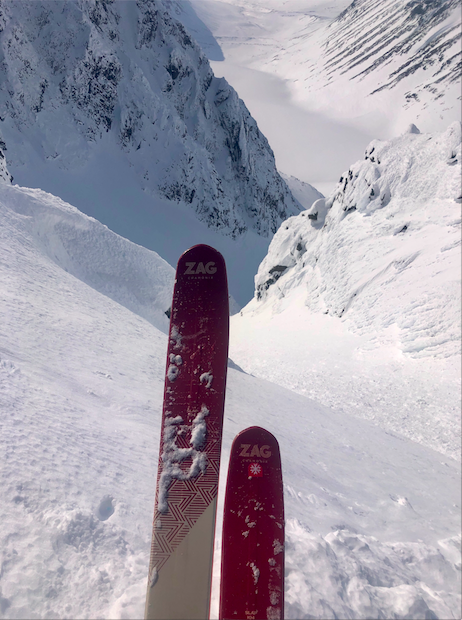 In the line of the descent there is 2 bolts places on skiers left at each section of rappel, 20m and then 30m 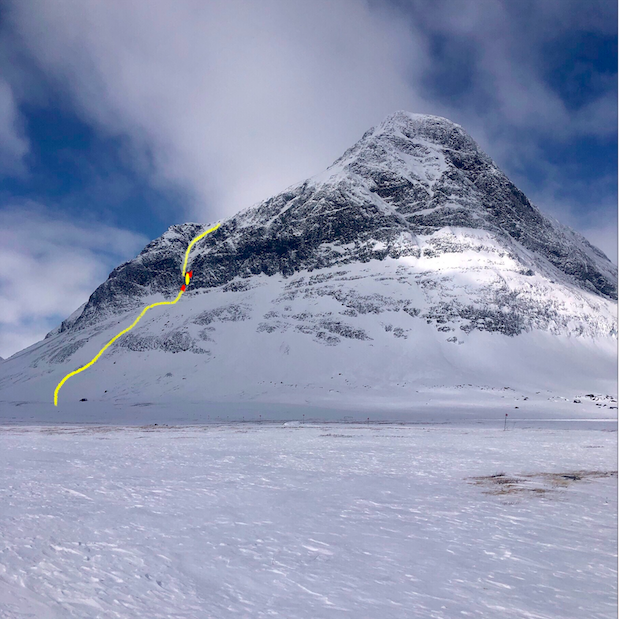 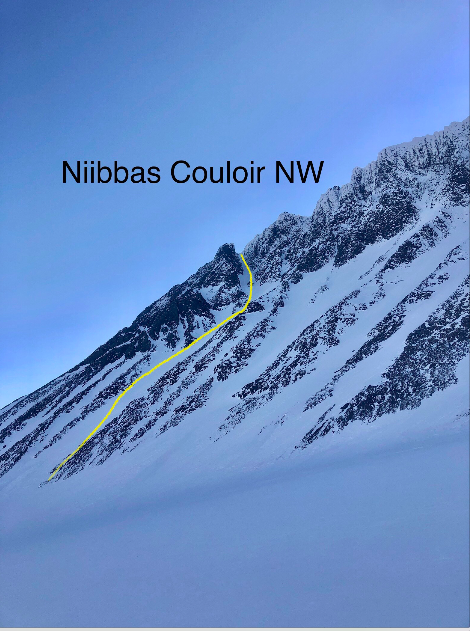 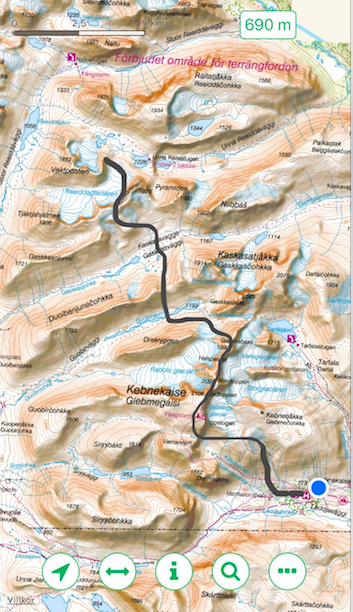