An other winter has passed in the Lapland area of Kebnekaise

This was one of the most snowy winters that I have experienced lately in this part of the world. Just amazing quantities of falling snow more or less every day from beginning of April and over 3 weeks, with cold temperature and stormy winds. Which made it just perfect for powder skiing.
The amount of snow wasn't a lot, but the quality and stability of the snowpack, tip top.
And, with this kind of weather it also kept the helicopters away, grounded cause of non flying weather!!
More of that in the future I hope. And, most likely as well cause of the ongoing climate changes 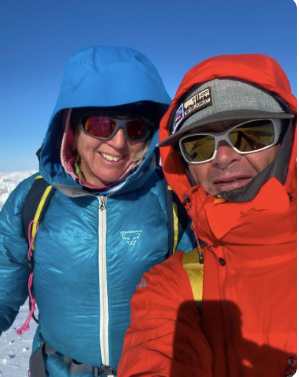 One week before arriving in Kebnekaise the weather was more like spring time, melting snow, rain and even waves on the lake in Laddtjovagge which made it looking like full summer.
The snow mobile transport between Nikkaloukta and Keb was even cancelled for 3 days. Something that never has happened before already in the month of march.
But, then the temps dropped and it started to snow...
This year my wife could join me, again, for helping me with the work to prepare the Keb Classic ski race.
The work to put up the course was quite demanding with all fresh snow making it a really hard work to carry up the ropes and all other equipment.
We also choose to make it a bit extra demanding, including the whole ridge of Toulpagorni, so we had a full on schedule and no time for off work skiing this time. 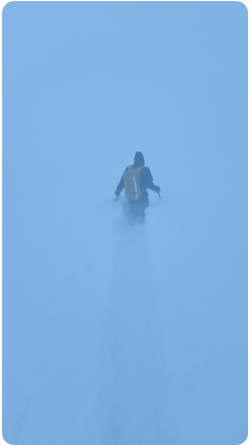 But, finally I had one day between work and I could head out to try two lines that I hade seen since before.
One from Vierranvare, that was skied previously by one of the staff at "Sporten" in Keb.
This line took me to the valley between Toulpagorni and Singichokka. From where I had planned a new line on the steepest side facing East/ Northeast side of Singicohkka.
A quite demanding line that would involve some down climbing or probably a rappel.
The weather was with me and I could set off under a sunny sky and perfect temperature, a few minus degrees equipped with crampons, ice axe, 60m rappel rope and some stuff to make anchors with.
A pretty easy skinning took me quickly up to Vierranvare where, after some trouble to find the right couloir, I could start the descent down my first objective, The "Tryggve Couloir"
A quite steep but short entrance, some 55°, down to a more moderate section in a deep cut couloir of about 25° skiing and 550 vertical meters. At the exit it is probably no problem to just ski it out, with a good amount of snow. But this year I need to traverse out a bit to the left, steeping up with the skis, to a more open field which gave an easy sortir.
Unfortunately the snow pack was re-frozen and hard, except for the entrance. But a cool line indeed!
Well worth a Keb Line! 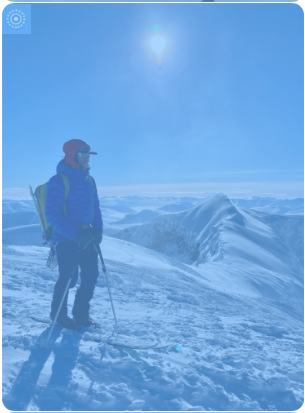 Next I traversed the valley and started climbing up towards Singicohkka, or Sinnicohkka as it is also called in the Sami langue. I took the ledges and runnels west of "Silverfallet" and could find some easy but slow terrain. I brought 2 axes just in case and that was quite useful a few times.
From the top, 1704, its easy, but a bit scary, to find the start of the line. Looks more or less vertical but slower down once in the terrain.
Steep exposed no fall skiing to start with. Then I chose to exit the couloir to the left to go more on the north facing side over some nice powder field, which ends in a rock face.
So, time for a rappel where I could arrange a piton and a sling around an rock. The rappel is about 20-25m, so I just made it on one rappel.
Then its easier terrain, still a bit steep to start with but all safe. Skiing, traversing out more skiers left and then to the bottom of Silverfallet.
An other great line with actually a 1000m vertical descent, not bad!

Krister Jonsson
Became a certified Mountain Guide 2003. Krister has been climbing in most of the continents and putting up new routes in the Alps, Africa, Asia, former Russia and Greenland as well as in Norway and Sweden. Ascended Mont Blanc 72 times. Matterhorn 18 times. Kebnekaise 480 Times!! Mount Elbrus 5 times on summit. Co-ordinator and arranging the Ski d´Alpinism race of Kebnekaise Keb Classic