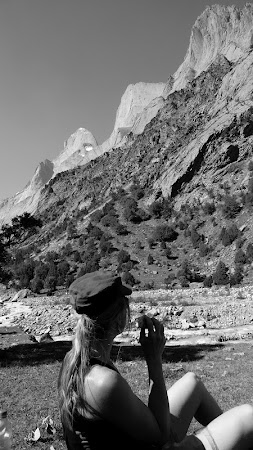 After almost 3 weeks in the granite area of Aksu valley. Which is supposed to be in Kyrgisistan. But depending on who you ask, Kyrgis or Tadjik, that might differ a bit though.

Something we came to a sharp end figuring out in the real end!

Anyhow. The food situation was slowly becoming a bit low on energy. Specially since my partner had made the brilliant decision on not bringing any extra supply regarding energy cakes, bars or just any. The daily booster would be our extra nuts and dried fruits. So, it wasn't perfect so to speak.

But, after some negotiation, a relaxed one in good friendship, I could trade some of my equipment to 4 big nan's (local bread) with the local shepherds. So, suddenly the empty gaps could be happily filled up again. 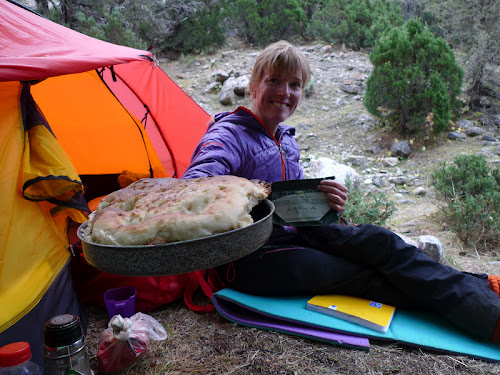 The first weeks of our trip had gone unbelievable straight forward and with the mostly perfect weather we suddenly had climbed both the main goal, Russian Tower, also known as Peak Slessov. Via the most beautiful Perestroika crack. An 800mts climb topping out at 4220mts, that is the ever best route I did so far! 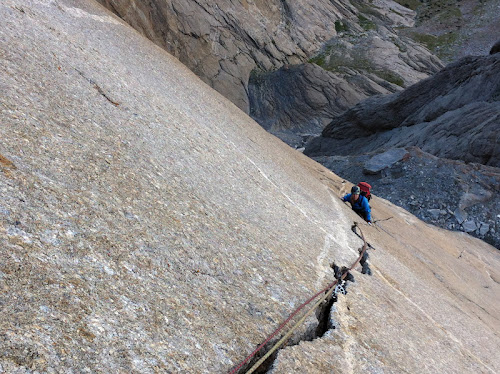 A most stunning line, Perestroika Crack 7b

24 pitches with out no bad or loose rock and containing everything from finger cracks to offwidh and chimney to slabs...

Also we had put up one new route over 16 pitches French 6b, which we named Lazy Lizzard. Starting from the very base of Slessov (see topo)

And repeated an established Russian route on Petit Ruissan tower, that we climbed free up to 7a, 7pitches. With a nice offwidh runout pitch! 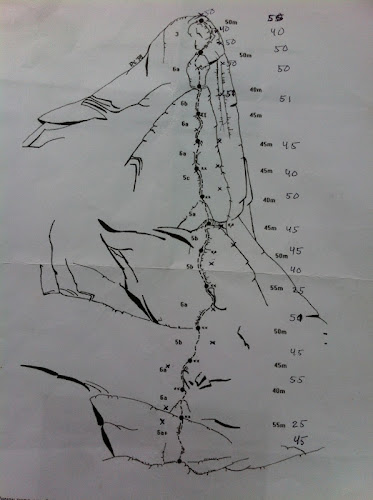 Lazy Lizzard, peak Slesov base, 6b New route 2012 August kjonsson/abacklund Starting to the left of the Dotted 1998 Italian route

These routes was all on the east side of the valley. But the higher peaks with the highest, given the remarkable name 4810, was on the west side. So I thought I use a rest day just to explore the route up to the north col of 4810 to get a view down to Karasu valley. Which also holds a whole great bunch of big granite walls. 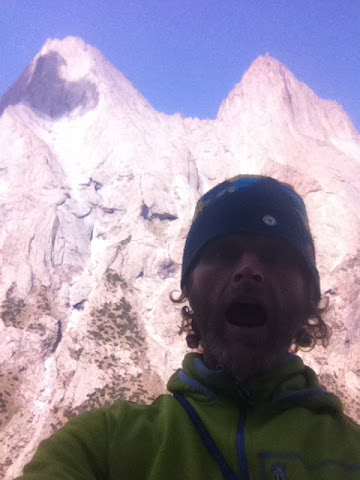 Peak 4810 in the background to the left, local Taliban in the front...

Said an done I packed a liter of water and a bit of the excellent negotiated nan bread. And my rock shoes just in case a nice boulder or something would show up in the moraine.

The walk it self is quite long one in a vertical perspective. Starting from 2945mts and our stunning BC the col is to be found at 4460mts. And the trail is the sort of the higher the loser. Crossing a now days non existing glacier, just old moraine and a bit of ice which is easily avoided. 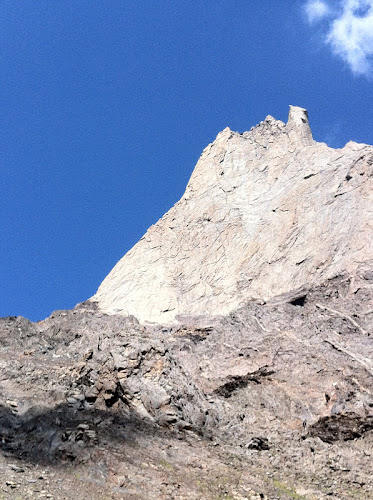 Peak 4810 summit viewed from the morain. The route goes from the left side on the pillar

Well, once at the col, which didn't take that much time since I could walk mostly in shadow making the effort easier.

But up here the sun was more then just shining and with no wind...it was perfect!

-The last bit up isn't that far really and could the climbing be that hard? Doesn't look so!

With no idea really about the grade I could just scan the rock face/ridge and try to figure out how to go.

I decided just to take my time. I new that it had been climbed just recent by two Americans. I could see there bivvy spot and after overlooking the whole thing the line was quite obvious.

Time to get going, sort of.

And direct I saw old slings and anchors, belay/rappel?!

So my choise wasn't to bad, so far after 30mts climbing. Only approx 350mts left!

Some sections felt a bit awkward but as usual once a bit on the way the feeling gets better and more relaxed.

And I was just thinking that if it doesn't feel "yaak" I go down...

After the first short corner with a solid crack I started traversing out towards the main ridge.

With enjoyable climbing up to 5b, US 5.9 maximum.

Just one short passage that felt...hmmm well. The big blanc tower below the summit was easily bypassed on its left and suddenly I was on the ridge it self with mostly easy scrambling to the very top. 1h 40minutes. Jeess!

A mt Blanc altitude peak but with out the crowds and only granite to the very top. No snow or nasty glaciers and smelly huts. To good to be true! Thanks to who ever built this(Y). Sure no time of record but just safe and easy going. And the stunning view over Aksu...call him what ever you want but it makes one believe in something bigger.

Now, the only issue was getting down.

Since I had tried to take the easiest line, some of the anchours was way in a distance. But didn't really matter since the rope was safe in the tent. But back at the key spot it doesn't feel great. No good steep and no second chance. What to do? I remember a left behind piece of static cord a bit up. So I climb back, pick it up and once back down I fix a sling around a horn which I can place the cord through long enough to support my descent, two long steeps. After which I can pull the cord with me and continue downwards to my boots and water. Long wanted water! As always, down climbing is way much trickier then upwards. An other good thing with practicing bouldering. Reversing the problem. 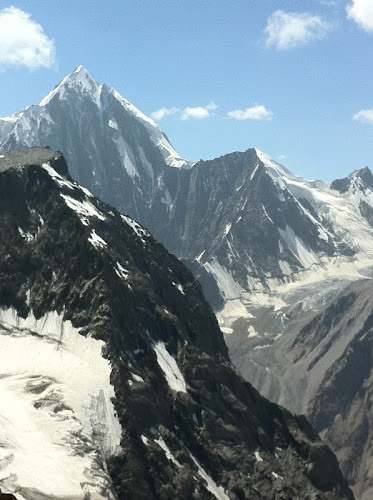 Le bellevue down to Karasu valley from the col

9 hour round trip with 4 hour climbing and 2000 vertical meter, 4000 in total. Still a bit to go but daylight enough to take it slow.

Luckily there are no lack of running water around so I can fuel up as much as I want and with the sun shining on my back start the last bit of descent back to the tent and dinner.

After another this time real rest day. We put a joint effort on central peak 3850 and aimed for an unclimbed line over to start with some brilliant slabs. Hard to protect but only on natural protection. Leaving no pitons and no drilled bolts. But with a first pitch of 50 mts giving frequently good holds and steps up to 5b only. Using an old anchor on a established route as a belay bringing Anna up.

Next pitch turns out to be a interesting one as well, still easy but very enjoyable and getting steeper. A perfect spot to belay and a third pitch taking us up to a big ledge where we make a 70 meter traverse to the base of a most stunning dièdre. Which looks "maybe maybe" 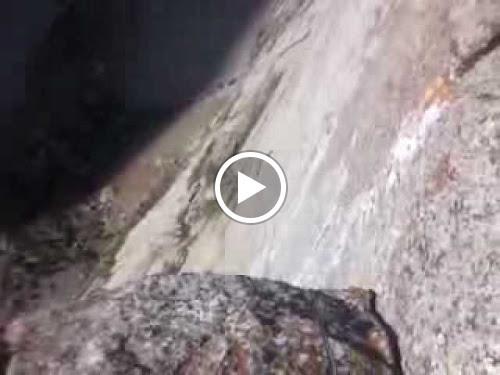 Turns out to be a most magic line giving great climbing all the way to the summit. 7b+ with the seize from no6 Camalot to blue Alien and micro nuts and runouts. 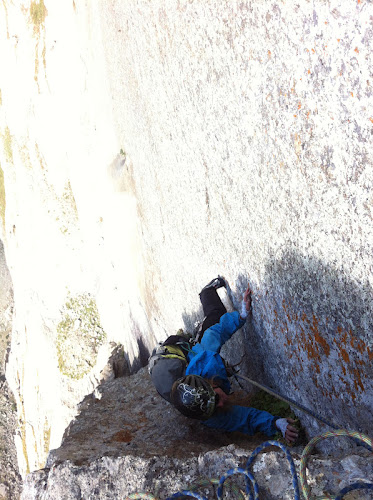 A lot of climbing meters later and it's time for descent. Leaving single anchor points on the way.

/ every goal fulfilled is a dream destroyed