This last weeks will be memorable though for me as pretty hard ones...

base camp of mt Everest. This last weeks I had the pleasure of guiding a couple of good friends up to Everest base camp. Getting them there didn't just make them as well as me happy, it also gave a feeling of the rough high altitude base camp and climbing life. After ten days struggle and walking we was just at the base camp at 5300 mts. With an other 3000mts plus to the surrounding summits...respect! 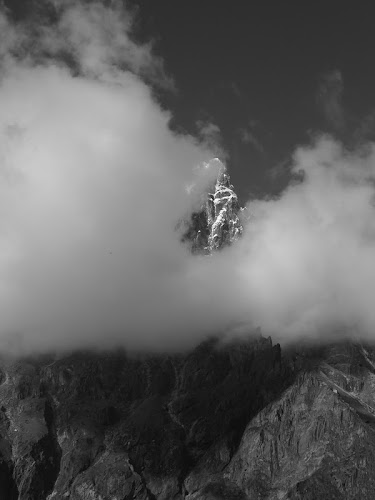 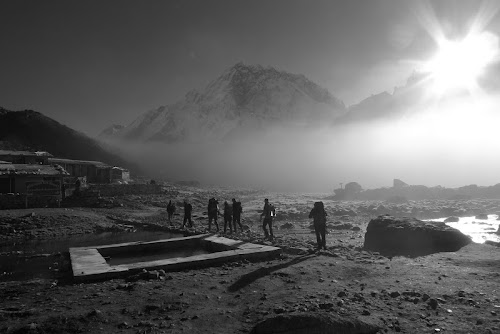 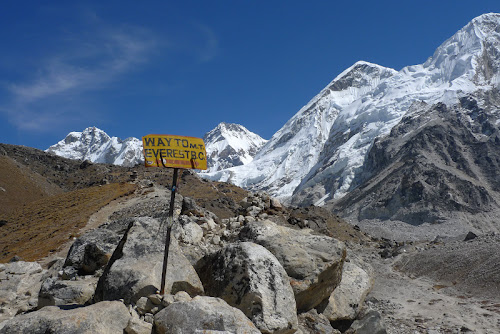 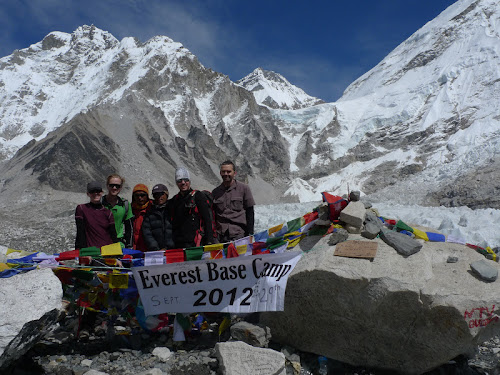 This is one of the most popular treks in Nepal. And it's easy to understand why!
The views over the greatness of the surrounding peaks are stunning, the food is memorable and the path is getting closer to a road nowadays... 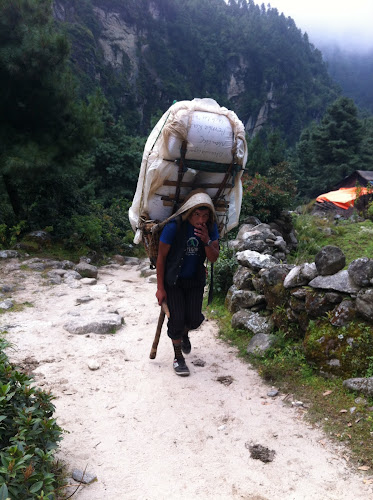 As always the porters do their work the hard way, unbelievable strong!
Passing famous villages as Namche-bazaar and Tengbouche. Overlooking mountains as Kangtega, Pumori, Lotshe and Ama-Dablam. And even if people talk about that "ooh, it's so crowded nowdays" it just doesnt matter. We are living now and don't need to compare how it was 20 years ago!

Ama-Dablam, one of the most beautiful mountains in the world. I stood on the summit 1999
And an other good thing is that these days there isn't just gravel on the landing strip in Lukla

The landing strip is built on the steep incline of a hillside. Its length is 450 m and width 20m and the runway incline is a staggering 12%. The apron has 4 stands. No landing aids are available and Air Traffic Service is limited to AFIS (Aerodrome Flight Information Service) only.

Landing in Lukla leaves no room for error. Pilots throw their propellers into hard reverse before they touch down. For takeoff they gun the engines as they race down the hill. Considering the extreme landscape it was the best candidate for the engineers to construct the facility. The strip is at an elevation of 2800 m with a an abrupt drop off down to a river valley below. The approach is through a maze of spectacular mountain peaks and the air is often cluttered with clouds

Their is always a risk with the flight, if it even runs. Last year it was cancelled over 9 days because clouds...this year it worked on our flight out! But, on the return we had to use helicopter.

And, just a couple of days after our flight a plane from Sita Air Dornier 228 crashed, all the 19 passengers died in the fire inferno. The reputation in Nepal with its flight safety is in a very low standard. With a safety record as bad as Congo and Nigeria. The reasons are many, lack of maintainance culture, poor crew training and poor procedures for flying in bad weather are some. Rugged terrain with monsoon clouds, inadequate navigation facilities and bad condition of airports makes it even treacherous.

This last accident was just one year after an other big accident at Kot Danda and six month after the Agni Air crash in Jomsom...a total of 114 people killed in the past six years!

This last crash with Sita Air was said to been caused of a bird strike, if so the first known one in Nepal. The most common one is caused by pilot error, usually by flying into a mountain side in bad weather.

Frequent overloaded aircrafts, deliberate or under-calculation. For example baggage allowance is 15kg but up to 20 is allowed. An average of 75kg are used for foreign passengers, but...reality shows an other weight of "modern" western people. I would say closer to 90!

There is also a problem with garbage filled urban sprawl, surrounding the Kathmandu airport. Drawing attention to a large number of birds. In the nearby Manohara and Bagmati rivers there is a frequent dumping ground for animal carcasses. It is supposed to be Bird Control Officers overlooking the airstrip, but on that Friday morning they didn't seem to be at office...?

For a country that depend hevily on tourism they will have to something about their flight reputation!


Then the next disaster, a big avalanche on Manaslu...


Maybe the mountain was a bit overcrowded this year because of the by political reasons closed China-Tibetan border. Also this peak has become more popular the resent years, as a matter of more writing about it maybe.

Caused by a massive serac on a high ridge above Camp 3 that broke loose, sweeping down the upper slopes. Same type of accident that happened at Mont Maudit earlier this summer. At least 15 climbers at the camp high on the mountain were killed by the slide as they slept. There were 25 tents at Camp 3 and all of them were destroyed, 12 tents at Camp 2 were also effected.

A good an talent guide

When I first got to Chamonix I had the pleasure of skiing with one of the best local guides, showing some of his best keept secrets regarding ski slopes. And he was always there to give advice and ideas of when and where to go. As so often, someone that exposes him self to enough dangers its easy that its one to many in the end, specially when exposed to steep skiing and snowslopes.

I will always remember the words that " I don't believe in bad luck, you have to make the choices your self" It's so true! There is always a calcultated risk in a lot of things we do. The higher goal the greater the fact.

There is always a risk in climbing and skiing, but as with so many other things there is also a lot of training and experience behind. As a proffesional mountain guide and/or climber there is many hours of practising in different enviroments. For most of us we tend to push the limit gradually, still with out taking unnecessary risks. Something we have chosen to live and manage with!


The best friendship is the one with out aucune exigence, no requirements. In a good relationship it is very easy to start taking things for granted, specially when someone is there every time there is a need for just that, being there. And it's not the words it's the sympathique that matters.
During just a couple of weeks some good as well as my best friend has passed away, maybe for a better world. Just thinking the words "c'est la vie" makes me wanna puke or just "up you're..." It is hard to lose a friend and that is that.
I can only hope that there is ice cream an masse. Because she is so much worth it!

With the Compagnie du Mt Blanc working together with the weather gods there seems to be two hard ones against every one of us so called "Alpinistas". Once again CMB thinks that just because the days are shorter the lifts can open later and close earlier...We just have to adapt and hope for better times...and it will come! But until then, I stay in the lower apostla approached areas...not so bad choise either en fait

And do the flying my self...