The 4078m heigh Schreckhorn is a most wanted and beautiful peak. Not so easy to access and not so easy to summit. It takes it's man, fearless man! And its South Pillar route is supposed to be of great quality and much demanding, even though if the grade isnt the highest. But, its far away from a regular sportsclimb! Just entering the named hut takes the fear out of most people cause the guardian is a gruff guarding man that doesn't make much of letting the airspace a little lighter...so to speak...

The walk in is said to be long and ... long. But I must say it is a bit long but still very nice with great views over a lot of 4000m + peaks and a brutal glacier.

And the atmosphere keeps its mythic cause of suddenly tumbling down the hill boulders as well as small rivers of water to cross. The first that wants to cross you and the second that you want to cross:)

A 4h walk from Pfingsteggbahn, located in the lower end of Grindelwald. The trail goes over and traverses a long mountainside with a track that gets more and more interesting the closer the goal.

You won't be lonely on the trail, a lot of locals around as well...

the Schreckhorn hütte, with the gipfel still in clouds


One thing that I don't like with alpine climbing is when I have people above me. The risk of someone pulling down a big rock in my head always wants me go faster then the rest of the "crowd" But, this is one thing that you don't have to worry about in this part of the world, no one else will probably be around. And, arriving at the hut it looks like said is true, we are the only ones! Might be beacuse it's the first official day open, but still. It's a Saturday, with nice weather!

The first glans up the hill gives the impression that only getting to the base of the peak will be a small expedition! But, after a second one, I get a better idea of how to get there. It says that this mountain is hard to approach, which ever side. And I must say I believe this!

After the evening Coffey the weather clears even more and we can get a good look over next days goal.

with the sunset the sky clears and we can get a perfect vuiew over our goal, Schreckhorn in the far distans...how the h..l to get there...


After a superb dinner provided by Hans and his nice wife, we both feel it's time for randevouz with the bed. The morning workout with sport climbing in Lehn and then the walk in has taken its share.

Next morning brings us a clear sky and perfect temperature, +4C and the neige has frozen to solid floor to walk up. The 900mts of hight to gain to the base will do much easier. Only thing is that we need to walk down almost hundred mts first to the glacier! 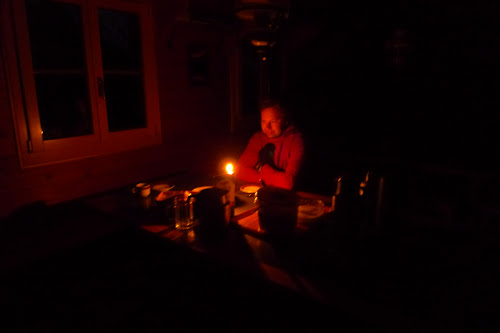 Christmas breakfast in a quiet hut

The approach turns out to be quite ok, once over the morain a good path brings us up to the snowfields and make the walking easy. But still, hard enough! The snow is hard frozen and the crossing of the glacier feels very safe. And finally we can get a first glance up the mountain and the objective route. It looks like its a bit of snow on it...

Once at the base we rack up and makes the final adjusments for going vertical. The bergschrund is easily passed and the neve is perfect to place the axes in. A stroll up the hill. 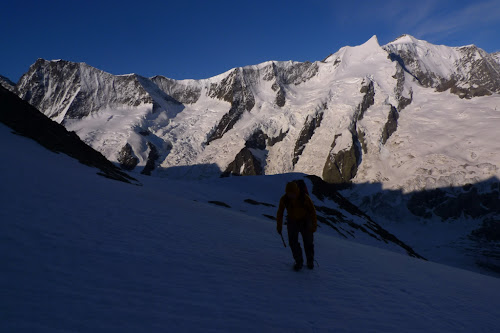 Approaching the South Pillar of Schreckhorn with other 4000m peaks in the distans, so much to do.

The first pitches are very easy on consolidated snow and some ice. The choise to bring 2 axes quickly turns out to been a good one.

Mikael on the arête, the red machine!

The route finding turns out to be quite obvious, thanks for that! But the amount of ice and snow gives the climb a bit of mixing feeling. Sometimes I have to take the crampons off to climb some slabs in my boots, but then needs to take them on again on up to vertical mixed terrain. Just magnific! 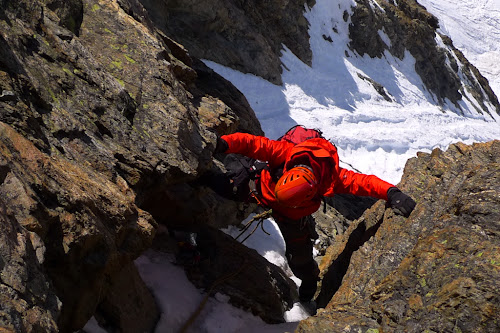 According to the topo there supposed to be a good number of pegs in place. But almost on the half part of the climb I still haven't found any.

The climbing is most enjoyable, though never super hard. But some nice runouts now and then on slabs that has a bit of steep feeling, makes me think of the rock shoes I am carrying in the bottom of my blueice pack. Well, they fits fine there. A bit of cussing over non possible chance to place any pro works fine as well! 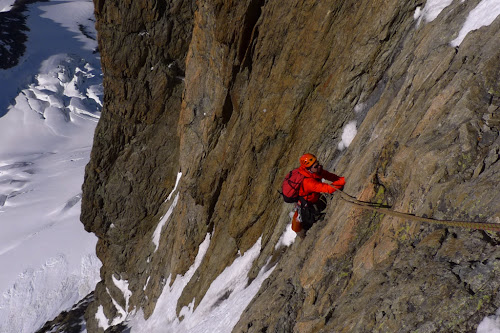 After pulling myself up a steep corner I find myself on a most difficult section, a slabby non protected traverse and a hard landing. No chance. Down again and fight myself over a short mixed section, on with the crampons again and axes out. 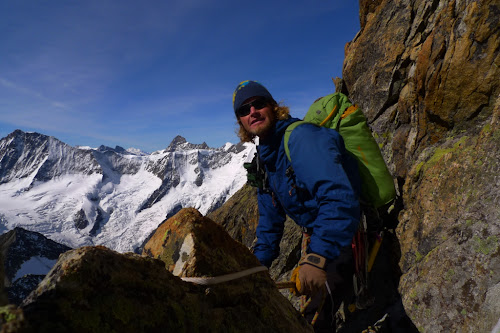 On the next belay I can see there is something shining in the sun, an old camdevice. At least now we are on route, and close under the pillar leading to the summit, after 3 hours climbing. 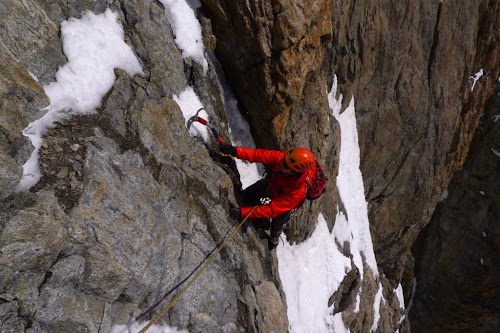 Mikael on an other of many mixed sections.

At the base of the pillar the crampons goes of again, some people decided to trough them down the hill, not me!
The rock goes ruff and looks a bit hard,some sections a bit hard to protect but over all again most perfect. Rock solid. 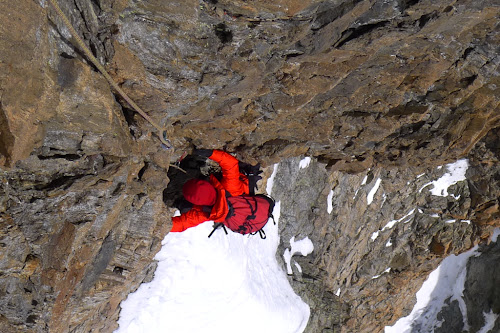 After this 2 pitches of steep rock the thing angels out and it feels like we a close to the col under the summit. But, the Schreck has one more test before leaving us the top. A most hard looking section up a ruff looking gendarme, but at least there is some old stuff on it in the shape of and old badly placed piton. I climb up and manage to clip it, but quickly decide to go down and replace it with a little better nut. Before mantling up on a small cussin' foot hold with some lousy pinch hold. Why have they built the crux at the summit!? 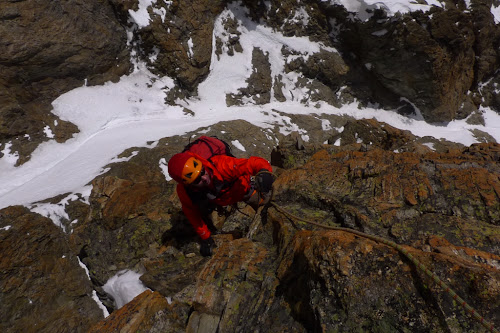 But it's just a short section and once over this I can see the final ridge up to the top. Gonna make it! But the wind has picked up and sometimes I have just a hard time standing up, and holding on to my hat! 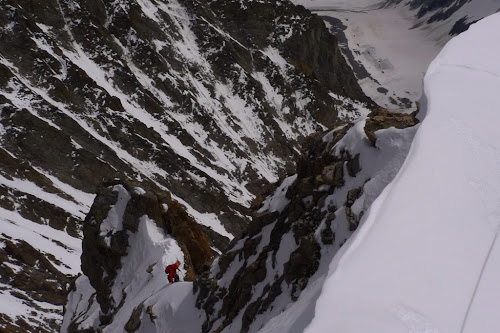 Last ridge to the summit

As always, this great feeling of completing a long planned route and topping out a great climbing effort, the Schreck fought well but with some cooperation we made it work.

-Ok, we managed to bring us to the summit, 600mts uphill, seen any good way down this hill?

Because we ended up with just 3 crampons, one and a half set, we decided to skip the full traverse and headed for the south west ridge to descent. Currently the normal way up as well as down. And, to my pleasant surprise there was good anchors here and there. Not even hard to find. And after a lot of rappelling we was back on the long wanted glacier!

An other great day in the mountains!

Only 2 hours walk back to the hut-dinner is served 19:00 sharp!, the last word spoken from the Schreckguardian... 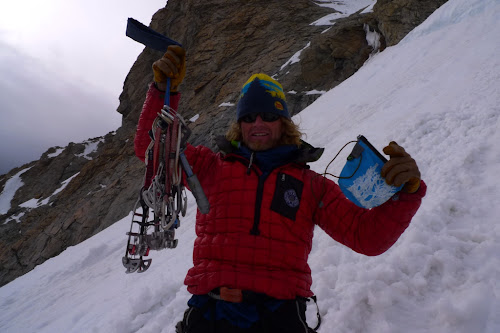 A good rack of hard wear with a nice looking chalkbag

You need, crampons/ice axe, maybe 2 axes, 2x50m rope useful but might work with one 60m, a small set of nuts, camdevices Camalot 0.75-3 plus some small green and yellow Aliens. There are no belays in place! 7-8 QD

And équipement for glacier
Recommended way down is the south west ridge, good rappel anchors 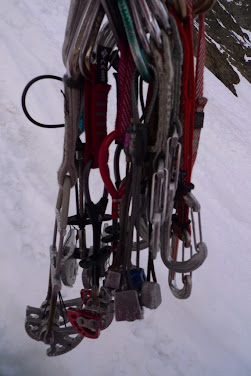 If you don't mind a long approach, this is a most recommended route up to a great mountain, long way from the crowds! 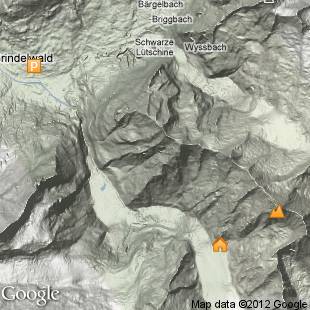 Email ThisBlogThis!Share to TwitterShare to FacebookShare to Pinterest
Etiketter: alpinklattring