Ok, now your not tied in to anything!
The words comes from Anna, maybe a little desperat…but I definitely realise that I actually had throw both ends back when thinking that I only untied from one of knots when trying to get a little bit longer rope outI´m standing at the one of the crux sections on the Arete Sud voie ClassicFirst climbed by Fernand Belin, Etienne Bruhl, Lucien Valluet, Arthur Ravanel, in Septembre 1928And as it looks and feels it a little more like a winter ascent a this time. With snow on the ledges and ice filled up in the cracks. And with a fighting sun high up on the sky which doesn’t make enough of a differens to change the situation. Its going to be a long day out! 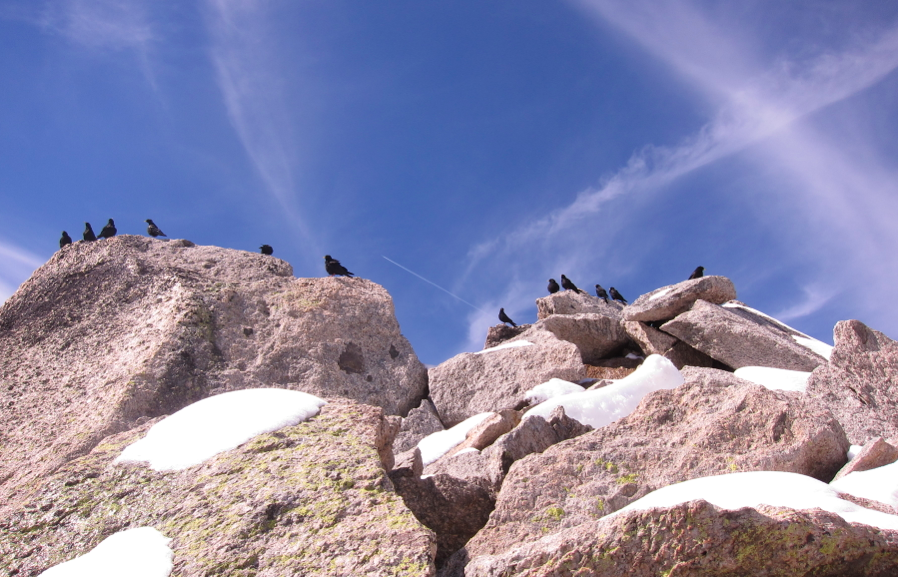 The aiguille du Moine´s south face is a big classic climb, also in the 100 classic climbs of Rebuffat.
The climb up to its 3412m high summit can be done via a couple of ways but the Arete sud is supposed to be one of the best. With climbing up to 5c.
The wall is reached from refuge du Couvercle which it self takes about 3-4h to reach from le train de Montanvers. From the refuge its an other 45min walk up easy terrain to the base of the climb
And as always there is an Intégral as well. Which makes the climb even more intégralistic
With the summer of 2014 almost behind the conditions has been like in the late fall the whole summer…a couple of days with sun, a couple of days with rain and snow togheter with heavy strong rafael winds 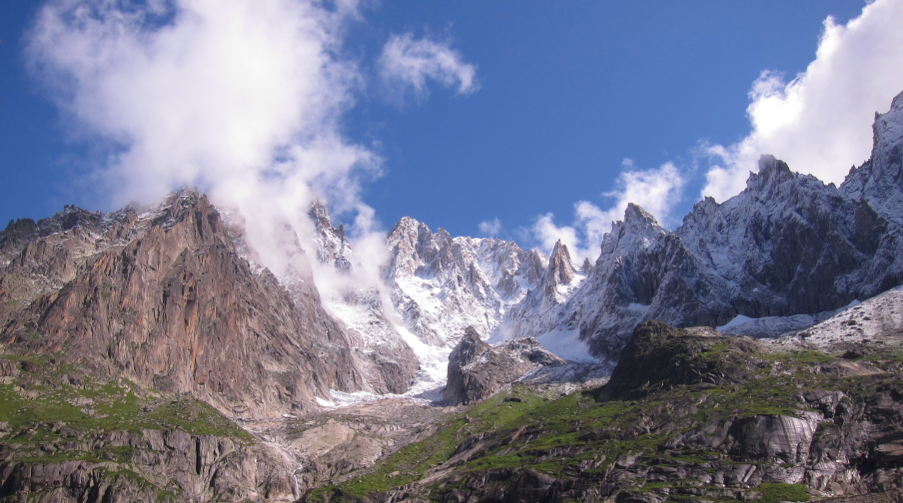 Our trip to the Couvercle area is just the same, trying to do a high mountain climb the day after a serious snow fall…well bonne chance!
Something that we gets very well reminded of on the walk in and up to the hut. The mountains beautiful covered in a layer of fresh neige while we walk surrounded of these stunning peaks, le Dru, le Droites, aiguille Verte (not so verte at the time) les Courtes and Grand Jorasses…as said a stunning area

Once up the long section of ladders, seems its been a lot of them this summer, the last bit of walking to the refuge is quite nice. Its just the boring bit on Merde du Glace that is a bit on the negative. But, with the lack of glacier crevasses, its quite easy at this time 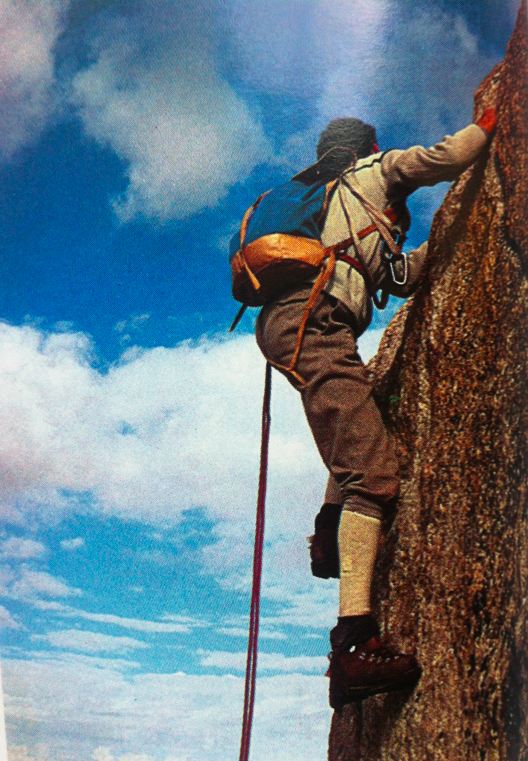 mr Rèbuffat on the last crux of Moine arete Sud, in leather shoes and the rope round his waist!

The Couvercle hut has some good history as well with monsieur Ravanel working in the hut as a gardien in his late years 1926-1931, actually until his death. Which happened just after the construction of the new hut (finished 1932 and took 70 people, a newer one which stands there today was ready 1952 and hold 120 beds)
Ref Couvercle history 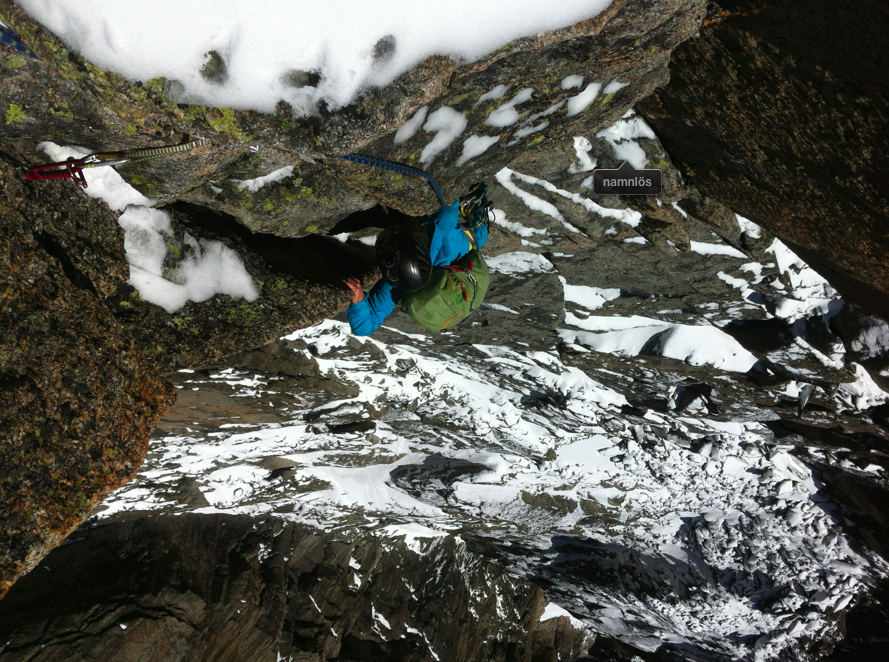 Going to be a great day out! Climbing on aig. Moine

After a reasonable breakfast with an 08:00 start we leave the hut with the words from the gardien, "the conditions is very terrible” and "no one has climbed it in this” we must at least have a ”look see”
And yes it doesn’t look good kind off, but not to bad either.
-Why not just go for a couple of longeurs and see how it is, I mean we are here anyway. I happily announce 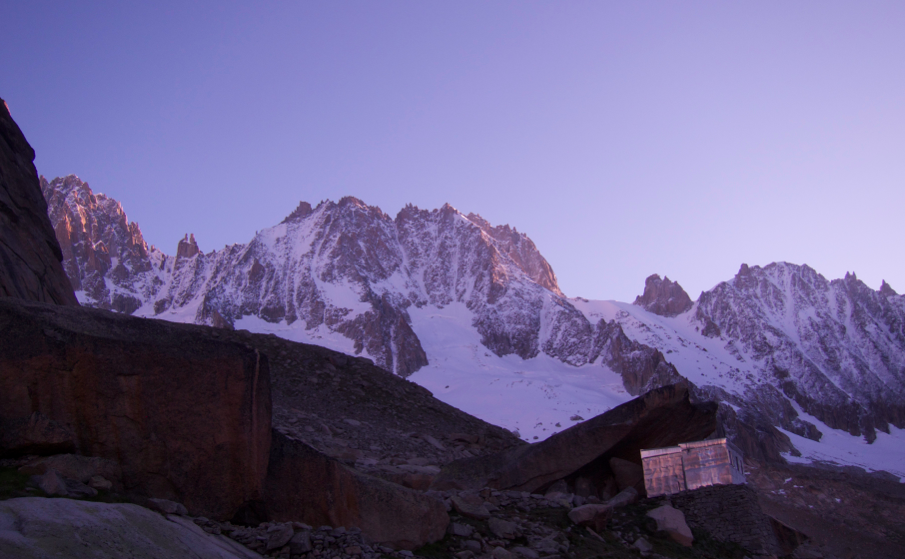 a lot of snow around. les Courtes in the front, the old hut under the rock

And Anna doesn’t have any opinions at this point. So we crampon up the last bit, balance over a thin snow ledge and find ourself at the base. And suddenly we are 3-4 pithes up and the sun starts to get some effect on the snow-covered ledges, starts to dripping and dropping sort of. A nice mix with the ice to get some melted variation also, which is doing its best to sink into the cord 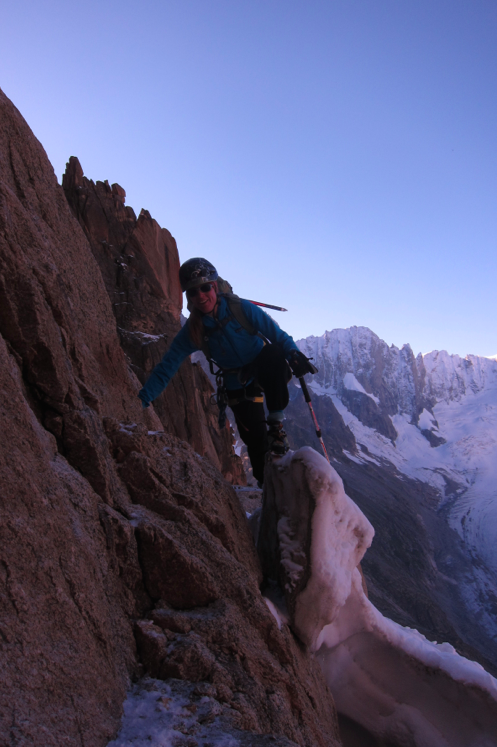 Balancing over the thin snow ledge

The verglaced rock keeps onsending me away from the route, which makes it necessary to take more difficult options, the normal one isn’t, and then some rising traverses back again. So it takes a while but finally we are up on the ridge just below the obvious and characteristic T formed block. 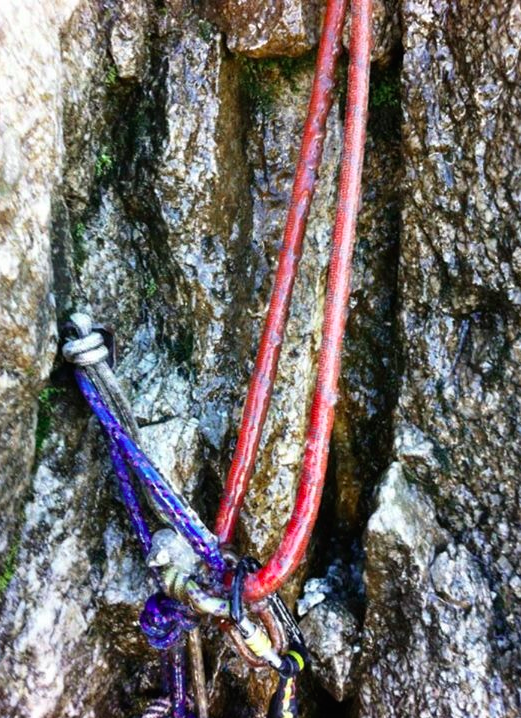 Up to here we have been changing between 25 and 50 meter rope and sometimes moving together But with the now iced up 5c cracks on the ridge the climbing gets a little sharper. So a couple of most interesting pitches send me up to the very top of the big T. A super sensual climbing!! A short down climb secured by a sling that I leave on the top, and then up again on the other side over a most spectacular ledge. Almost like the bicycle ledge on Grepon! 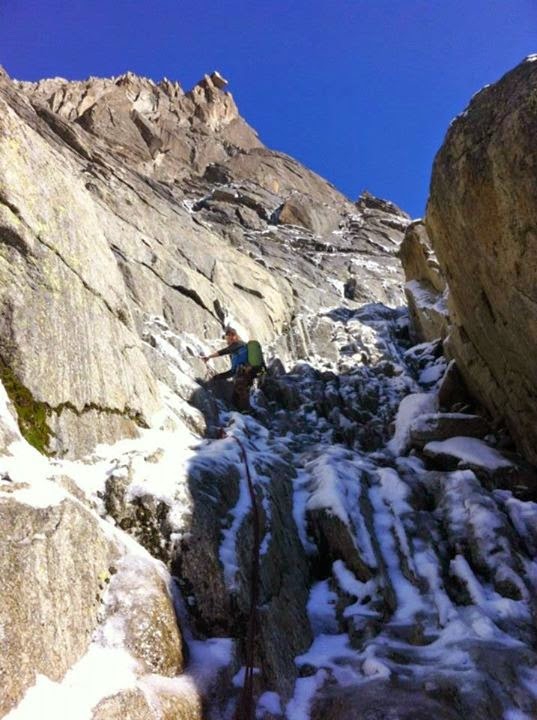 me leading the "ice cave colouir"... 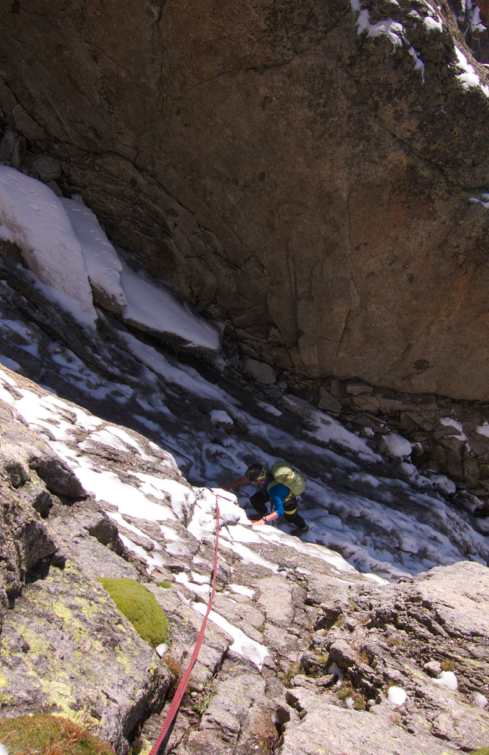 Then, a cold vertical pitch, again, but even harder then the former ones…is this never going to end. I find my self fighting my way up in the shadow with the fingers getting number for every second, and there is a few! Before I finally get a foot over the edge and traverse out to the sun and a nice belay 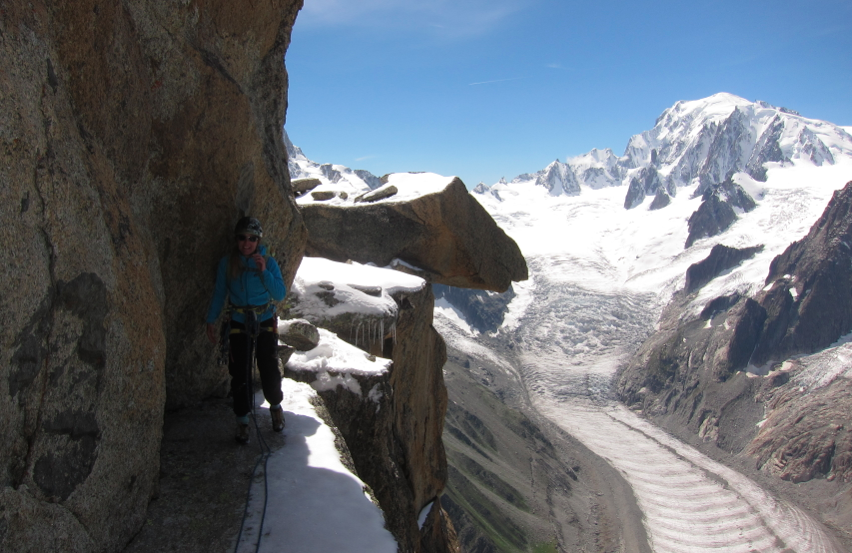 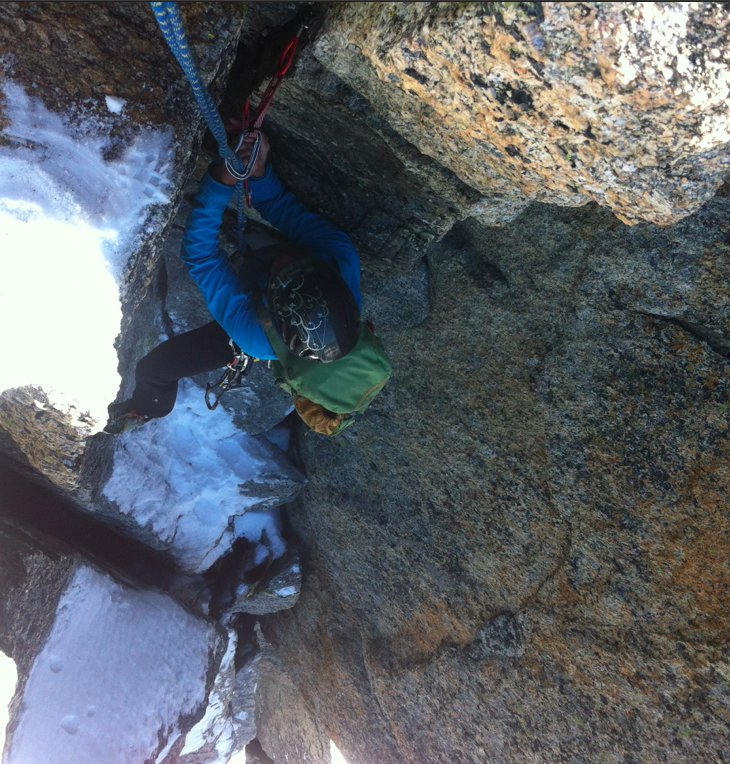 The last hundreds meter of climbing is a small adventure over broken rock with hard sections here and there and le Monk dosnt give any away until we finally reach its summit. Already occupied by a serious amount of Choucas, just waiting for a late lunch served by two frozen climbers… 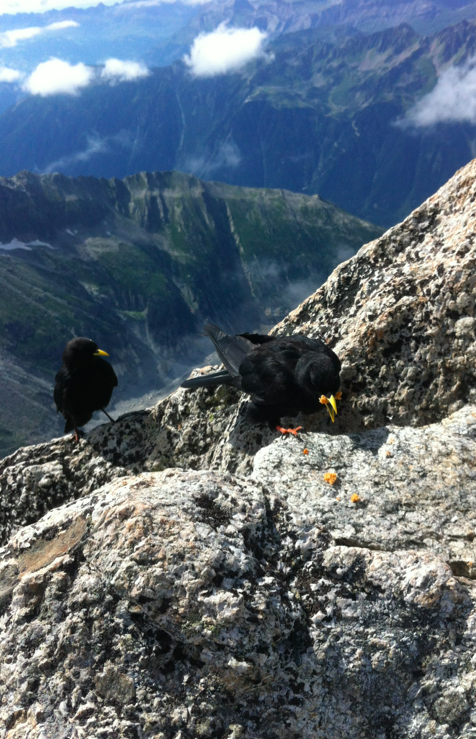 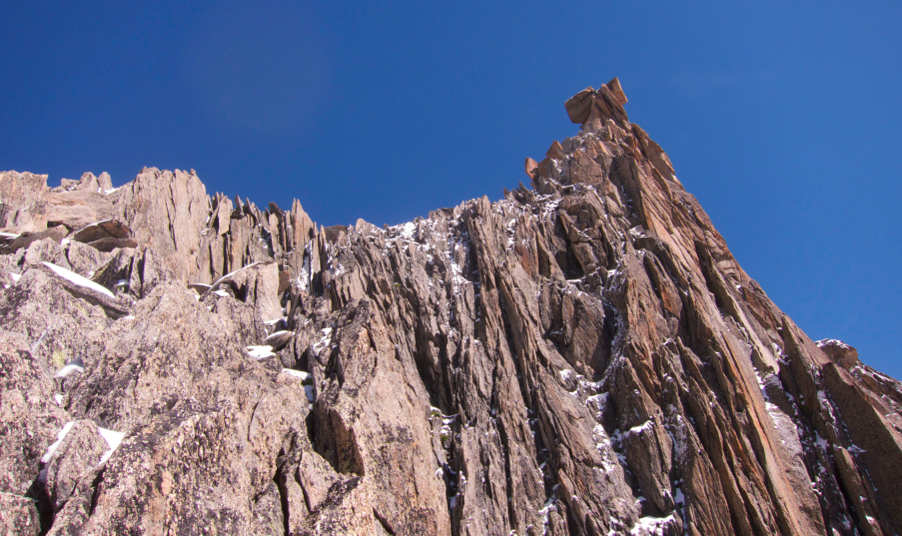 the T stone of Moine!

A couple of minutes rest in the sun, amazed by the beautiful surroundings, we share the packed lunch with our flying friends. Which we realise will be back in Cham in about 10 steep minutes. We, we are looking on a late night arrival back to car at some 21:00h
Well not to bad. 4 1/2h climbing and a great day out
Time to descent…some 2500 meters downhill 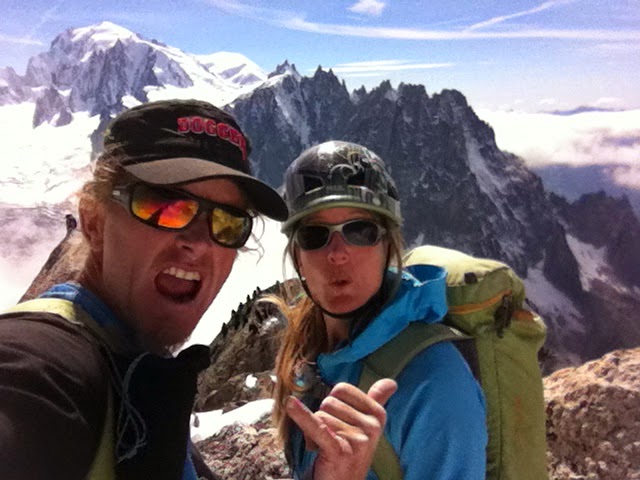 Happy climbers...
You need
Equipment
Rope 50m (possible to do the climb and rappel with one 50m rope but easier with 2x50)
A small set of nuts
Friends 0.5-3.0 Camalot
Piolet/Crampons 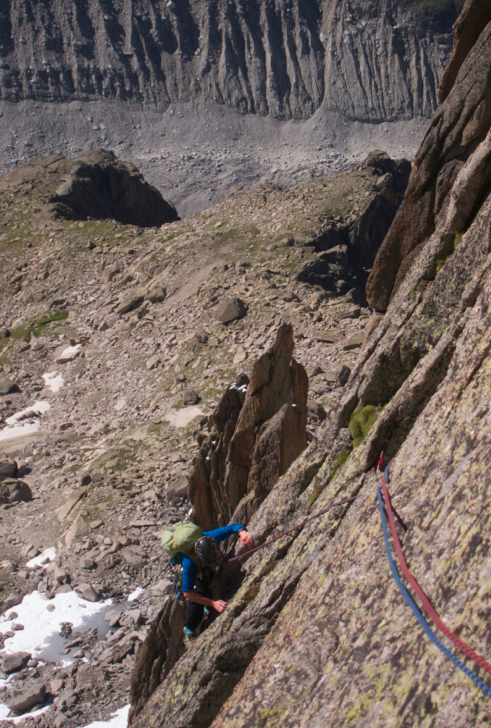 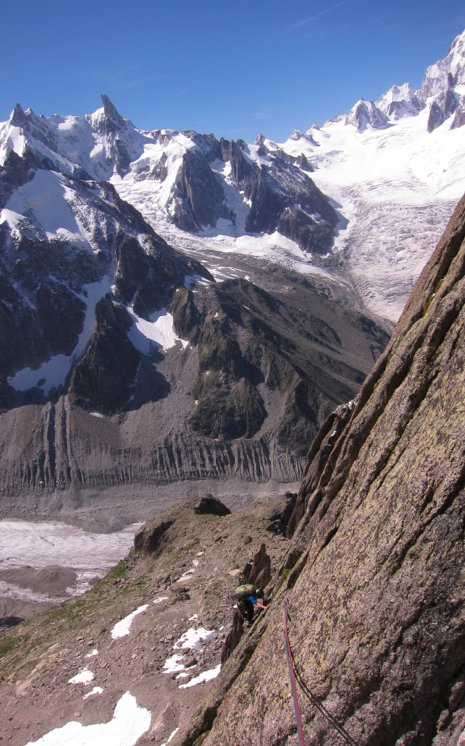 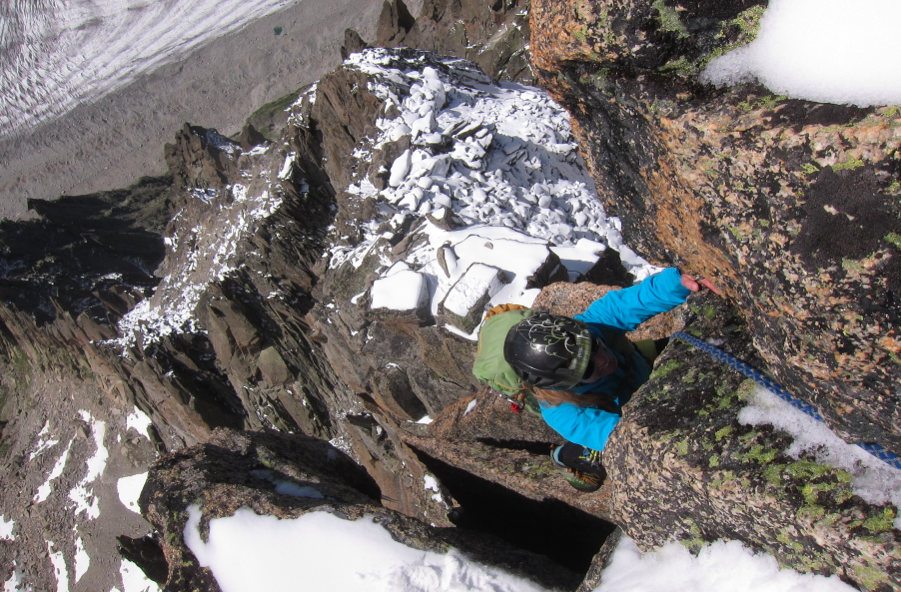 Time
Approach from Couvercle 40min
Climbing 3-5h
Descent 2h (the descent is well marked with cairns as well as rappel points. There is some walking and down climbing on the middle and lower section)
More info at
Camp to Camp 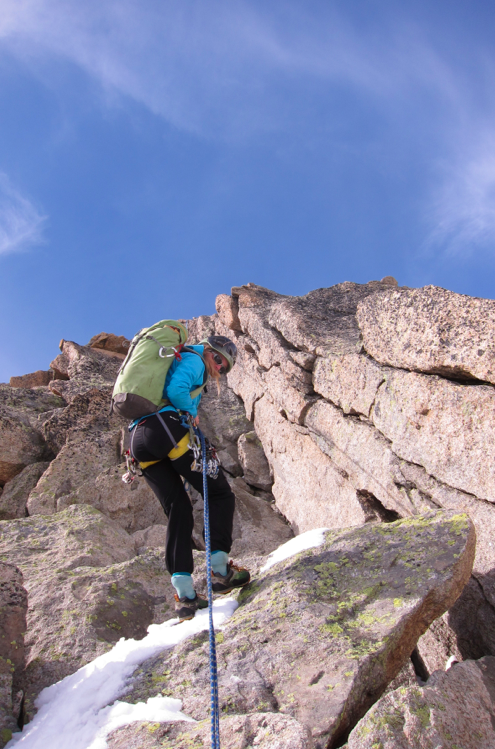 Rappeling of the summit, a lot more to come