One of the most beautiful natural lines to find in Red Rocks, Nevada. 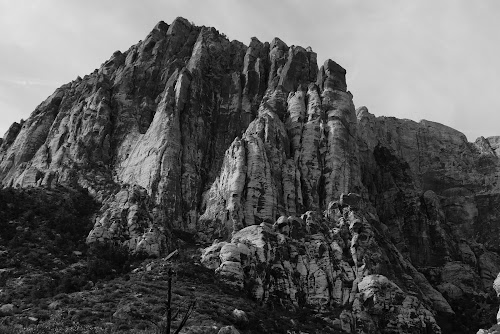 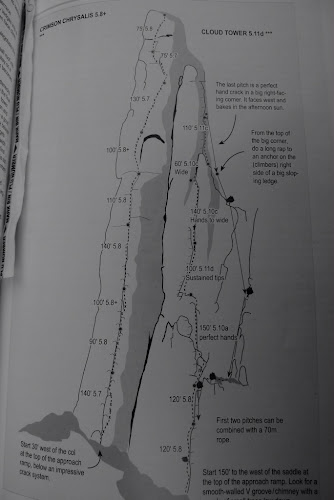 Togheter with its neighbor "Crimson Crystalis" Which is also a well deserved 3star route, but on a lower grade, this pillar is well worth walking up to and you will get the most perfect climb!
Leaving the classic and glassy hotel "Imperial Palace", after a good night sleep in the KZ bed and clean sheets, at 0700 for a car influent breakfast.
2 slices of bread and some water ( real water, not the American coffee)
A nice morning drive up to the red rock scenic route, yes that is involved as well on this. A great 12 miles drive trough... an area that is said to be Very Scenic. More of an unnecessary transport if you ask me.
Arriving in for us a ok time so no reason to force the approach to much.
A bit of route finding trough the bushes, trying to get the best path and two hours later, 09 sharp we stand at the base of this great climb. Cloud Tower!
But not alone, two other parties has chosen this magnificent route as well.
Not so good, but this time I will wait. Because I just want to climb this.
A bit lucky, but the second ones forget their backpack so after climbing up with that to them we can pass.
Looks like we are a bit faster.
One more pitch, 5.8 as well as the first one, which I more or less solo, with out putting any pro to save time, I arrive at the second stand. With a very easy looking 5.10 above.
More people above so I talk Anna in to leading that one.
Before the real stuff begins.
Still a bit confused of the other people on the route since they don't look that confident even on the 5.8. this will take some time, hmm. 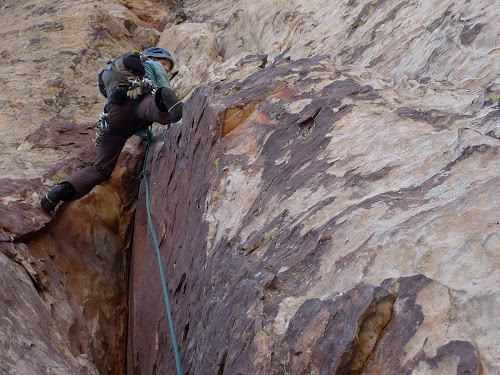 Anna B leasing pitch 3 on Crimson

After following on the easiest .10 I have ever explored I arrive on the 3rd belay. And where are the great cracks, over bolted as well...
Anna has the look of just solving the problem of AIDS as well as the energy problem at the same time. She has figured out something, that's for sure.
After some more clever looking, she has it; We Are on The Wrong Route Dude! Next nobel prize to her!
Big laugh, but isn't this perfect?
What to do, just keep on swinging the #5 Camalot and keep on going.
After catching up with the next party on the route they just look at me when I improvise an improvised belay, brings Anna up and they gently offer us to pass them as well.
-has a show to get in time to in Vegas tonight, just a quick one to get some appetite
I try to explain before taking off again.
Crimson Crystalis, don't miss it! 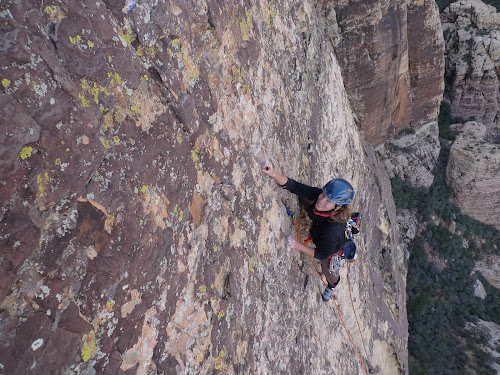 But, if you want to climb Cloud Tower. Keep on following the cliff for an other 50-60 mts and there it is.
One more hotel night and off again, this time knowing for sure that we are starting right.
No bolts, except on the belays, and perfect cracks.
With a pure pleasure I find my self jamming up the sand stone. Pitch after pitch.
The route finding is obvious, just follow the crack system.
And the 5.11 corner! What a great pitch!! 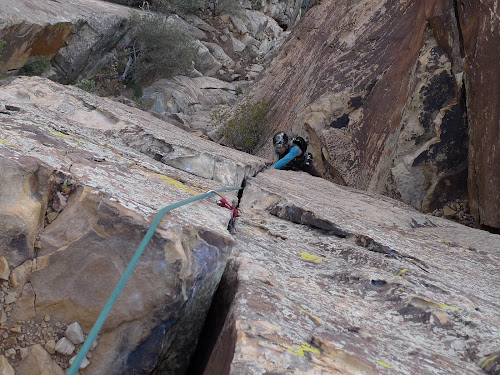 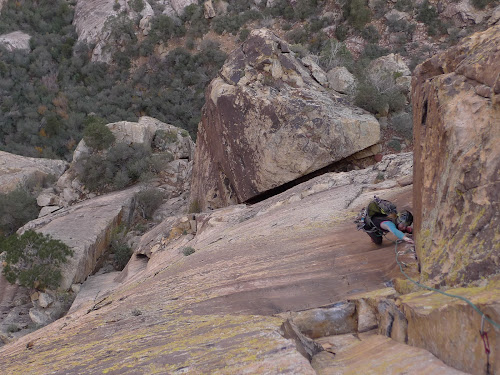 Anna on the fingery 5.11 pitch Could Tower

After the 5,10 hand splitter there is a growing chimney. Yes, it is said to be getting bigger.
Press trough and I arrive in an other world with an other perfect .11 crack going up, up and Up 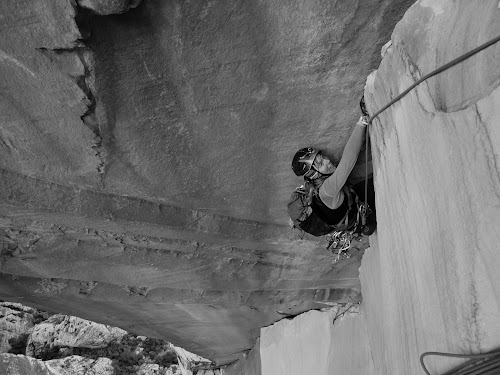 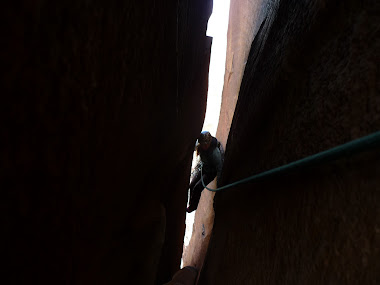 Unfortunate it stops just a bit under the pillar. So the last bit, the cloud tower direct, don't have the same quality. Super hard on a bit loose rock at 5.12d
I just have to do it though, since I'm there.
But, it doesn't give any extra to the climb.
Except that it is then possible to rap down the other side of the tower, down Crimson.
But, since it always, as we could see at least, a crowded popular route. That will take even more time then reversing the route. Almost the same.
There are a bit of tree rapping, and trixing to get down.
An other adventure...