Rainbow Wall Red Rock Las Vegas Bigwall!
As the areas preeminent challenge the central line on the Rainbow Wall, leading up to the Red Dihedral and summit overhangs. The original route Up Rainbow Wall is a classic! 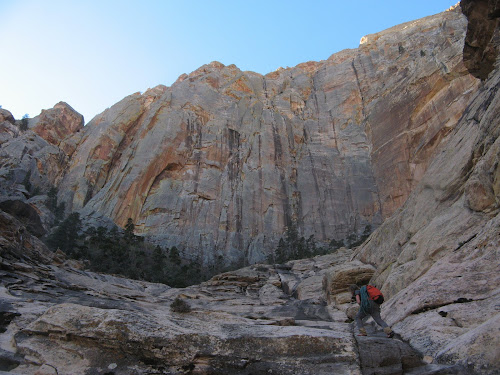 Approaching the Rainbow Wall, takes 1 1/2-3h depending on the trail finder in you

The climb, 25/11 2011
-This wont go, I just can't see how to do the move...I cry out after scanning the crux.
After getting over the first 5.12 pitch quite easy I thought that the other P up to the big 5.7 ledges would go flying. But how wrong was I!
I climb down again to find a perfect place for a midsize nut, yes! Feels better.
Up again but this time with an other feet move, better balance and...I must do it, no other way. The story can't stop here, after tht approach.
Finding my balance, perfect again, a small crimpy handhold and up up Up.
Yes! Did it.
The next moves is again much easier, and it might just be as written in the climbers guide; "the crux'es is more of a boulder problem"
But quite hard ones I must say.
A bit of challenge to get the hold right, the right sequence is essential.
More like sport climbing. But big fun! 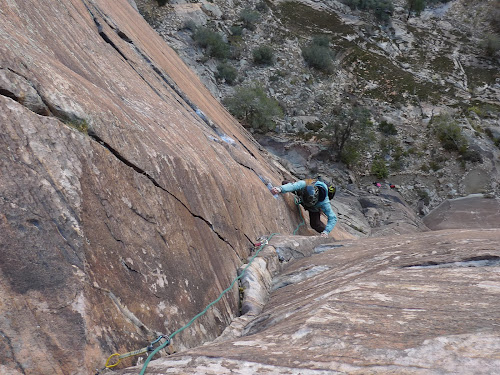 After an easy stroll of the first pitch 5.7, the routes hits as a hammer rolling up 5.12a, 5.11d, .11a
and a .11b before it lays back with two .10 pitches up to the big ledge. Then it's halfway...
It even involves a small 5.7 chimney and two short over graded 5.8 pitches.
The topo Eritrea something about a runout on one of them but nothing to worry about. 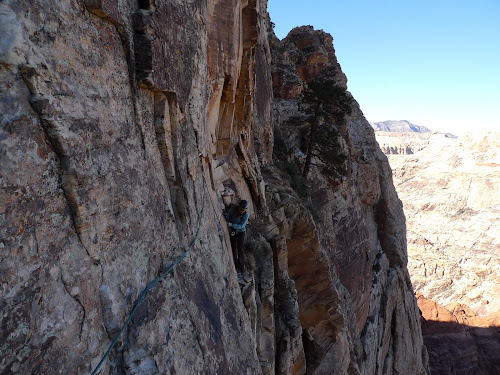 on the 5.8 traverse, involves some great views as well!

And then it comes all over again reminding again of how it should be on a big wall route.
The crux pitch. An everything than laid-back 5.12 which might be easier for a tall climber but with my 172 long cm it's a stemming and twisting thing which I this time can see how to do but not just possible to figure out how.
But, as before, there is no other option, just go for it.
This time with the bolt just below, so no worries incase of a fall.
And after a couple of tries it goes! 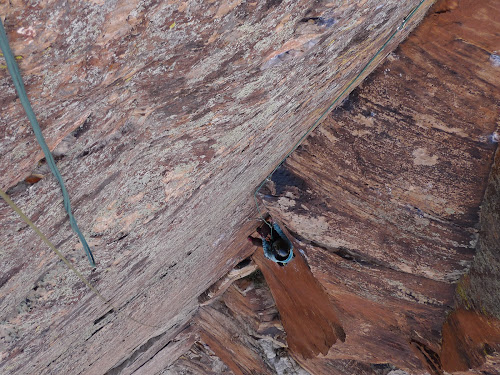 Hard and steep in the desert

Despite the intimidation of loose blocks and unknown difficulties, this line became the focus of several early attempts. Joe Herbst and his El Cap partner Larry Hamilton climbed the first five pitches in 1972, but retreated with tattered ropes and haul bag following a near-disastrous rockfall. After climbing a few more Yosemite walls, the pair returned the next year to complete the first ascent in a single three-day push. They spent nights at the base and on Over the Rainbow Ledge.

It wasn't until 1994 that this route was climbed completely free.
A free ascent involves many pitches of 5.11 and 5.12, and was done by adding anchor and a lot of protection bolts. However, this act significantly compromised the experience for climbers choosing a traditional aided ascent and many of the 50 bolts! were removed shortly afterwards. What remains is a challenging climb for bouth aid or free climbers, with good anchors and enough protection bolts to render it a reasonably safe climb. A big approach is involved and temperatures must be monitored carefully for a few days, to get the best time to hit on this big desert wall. (We climbed it in late November,25th, in perfect conditions) The rewards are some of the most spectacular climbing and scenery at Red Rocks.
If aiding, bring some standard hooks, camming hooks, and lots of small wires instead. Hammers should absolutely not be used to place gear on this relatively soft rock!
There are several major variations in place by now, but the original line is chosen here for its purity of line and history.

This route isn't just a crack climb, it involves a lot of crimps, slopes and lay backing on big hold as well as fingertips. Friction steps and all kind of tricks.
And it's not until the last pitch that I feel that it's over, relaxing.
Every single pitch is just great, even the 5.7 transport on the big ledge is a bit of adventure.
Even thought a climb like the neighboring Cloud Tower is more sustained this is much more committing, as it's not always possible to place gear. So even on a difficult pitch there is some run outs. Which it should be on a big wall like this.
Now and then I can scan the cement after the bolts placed on the first free ascent. Which the local climbers, hurray to them, banged away and re-maid
this great route it's proper challenge. Even though, it will never get the same feeling as the first ascenders had because there is still enough bolts to make it feel SAFE. Lucky me and thanks for establish such a route, an other of the 50 north american classic climbs...ticking them of. 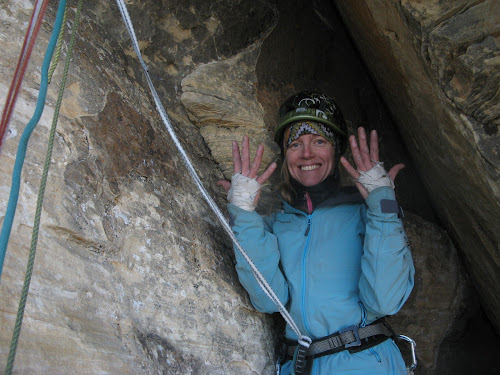 Anna on top of the last pitch

A free climbers rack for Rainbow should include
a mix sorti of mixed nuts
cams, black Alien to #4 Camalot, double of green and yellow alien
5-6 quick draws
Rope, we used a 65m single and a 50m trail line
It's enough with 2x50 or one 70m for the rappels
All belays/anchors are bolted with 2 or more bolts and equipped with chains

not, the rappels don't follow the route of ascent
It takes a more direct line.

/Fly what you climb